The developers over at Kong Orange have successfully danced their way into our hearts with the delightfully romantic and macabre puzzle game Felix the Reaper. If you enjoy grim humor and challenging puzzles set against a creative theme, then keep on reading. This is our review of Felix the Reaper. 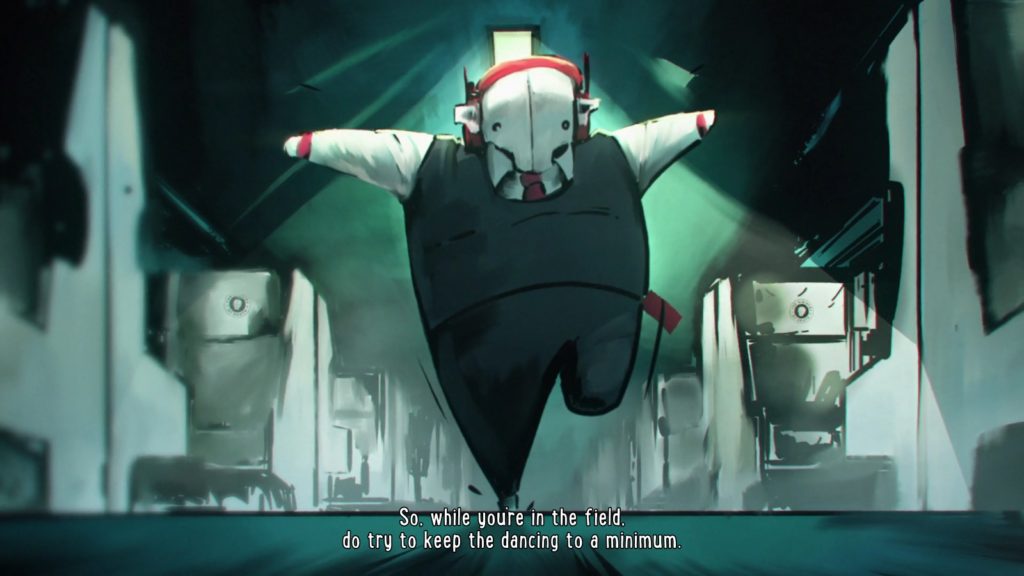 Felix the Reaper centers around a grim reaper named Felix who works for the Ministry of Death. He’s kind of new to this whole reaping business and loves to dance while he works, which surely gains him a lot of intense glares around the office. We are told through a beautifully animated and hand-drawn opening cinematic that Felix isn’t reaping just for his own pleasure. He is lovesick over a curvaceous woman named Betty who happens to work for the Ministry of Life. It’s our fabulous reaper’s hope that by working for the Ministry of Death that they’ll cross paths and start a beautiful immortal relationship together. 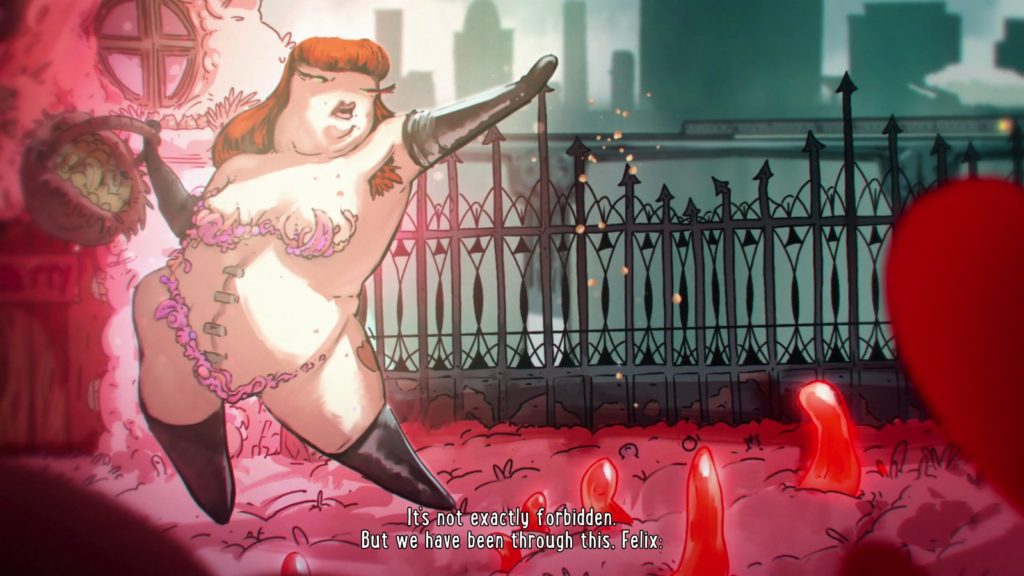 The quirky voice of our introductory narrator is quick to shut down Felix’s dreams. Their work is just far too different, and there’s absolutely no way it could work out in the end. Not one to be deterred from his one true love, Felix dons his pair of headphones and dances, flips, twirls, and grinds his way across the material plane to complete his jobs. 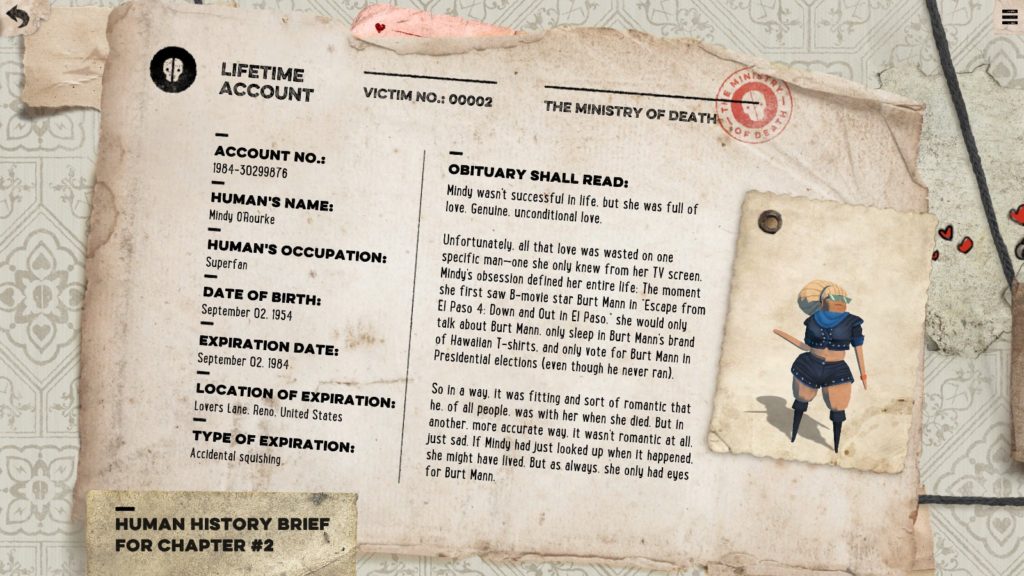 The tutorial of Felix the Reaper is fairly intuitive, guided along by a wonderfully voice-acted narrator who left me wanting more. When the tutorial was over, I actually missed his voice and was disappointed to find that he didn’t follow me through the stages of the game. The core mechanics of Felix the Reaper are fairly simple. Felix is placed on an environmental grid at a specific point frozen in time, where he has to slide through the shadows to manipulate the objects on the material plane. By doing this, he can ensure that the events in the scene unfold according to the mission he acquired from the Ministry of Death. 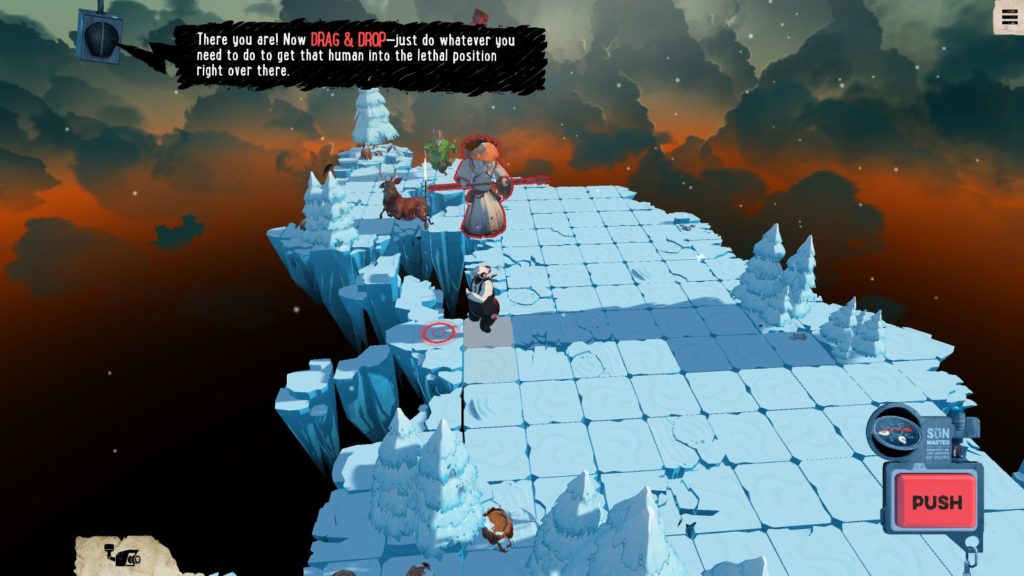 As a reaper, Felix cannot touch the light. With the flip of a switch, Felix can change the direction of the light source and maneuver through another path dictated by the shadows of the objects around him. You can also preview the trajectory of the shadows before you commit to hitting the switch, which is a nice addition. 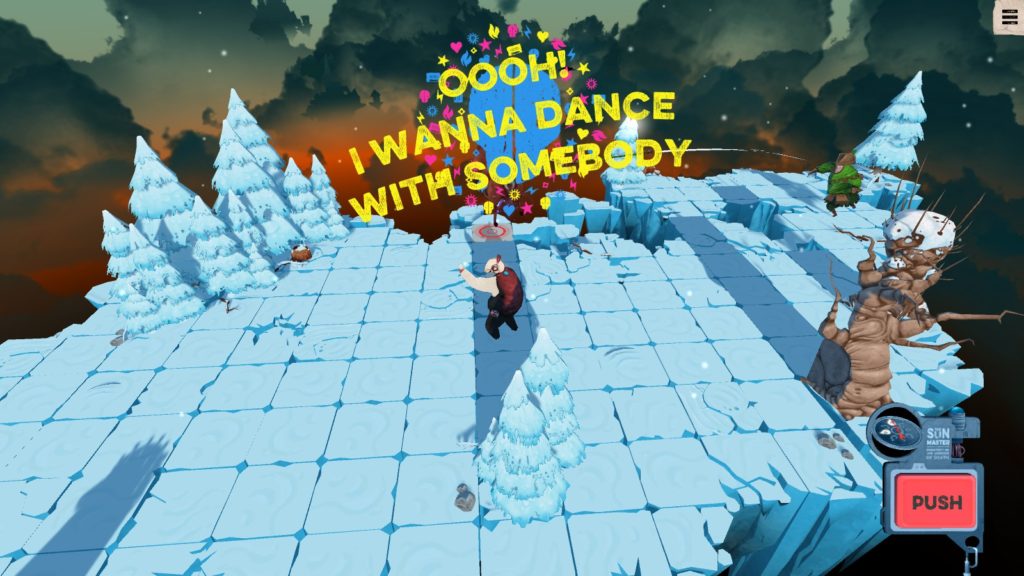 Progressing through the levels rewards you with challenges and new objects that weren’t explained prior. So moving on from the tutorial can be jarring in some places when we are introduced to new items and don’t understand the limits of our interactions with them. There is a helpful button in the settings that allows you to show the next “hint” or “step” of where you should go, but sometimes when you have several objects on a level and all of the red arrows are pointing towards them you aren’t sure which one should go first. It can quickly overwhelm a new player. 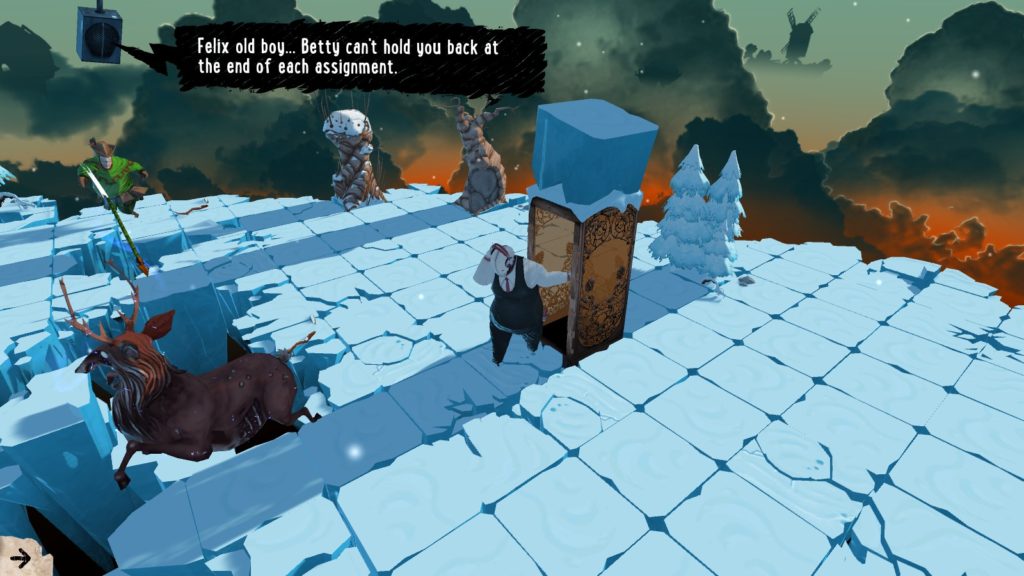 Another nice quality of life addition is the option to change music tracks playing in the background of the level. While all of the music is incredibly well done, sometimes hearing the same loop over and over again can start to drive you nutty. Having so much variety to choose from was an enjoyable feature. 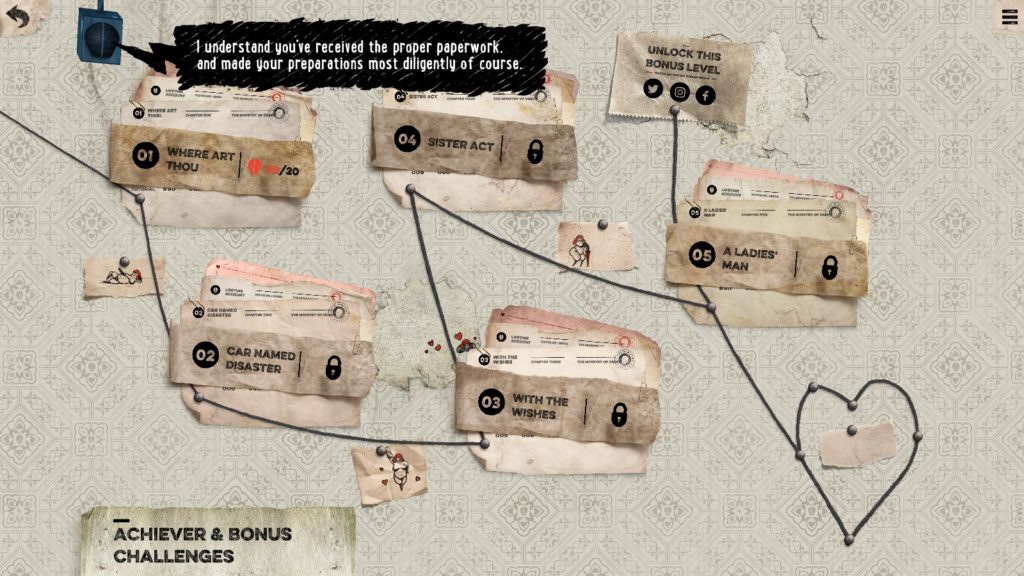 My main complaint with the game is how unintuitive some of the puzzles in the later chapters can be. Having a new mechanic or item introduced into each level was probably meant to add a bit of spice and interest to a level, but it felt more tedious and frustrating since there was very little guidance on how to use these new elements. With that being said, I did enjoy the challenge that the game brought and refused to get up from my seat until I had pushed my way through a level. Having Felix start his own dance party at the end of every level was a nice reward for the several minutes of frustration leading up to it. The cutscenes that showed the outcome of your actions were also a nice touch. It felt satisfying to see all of your hard work and labor immediately on display the moment you finished a level. 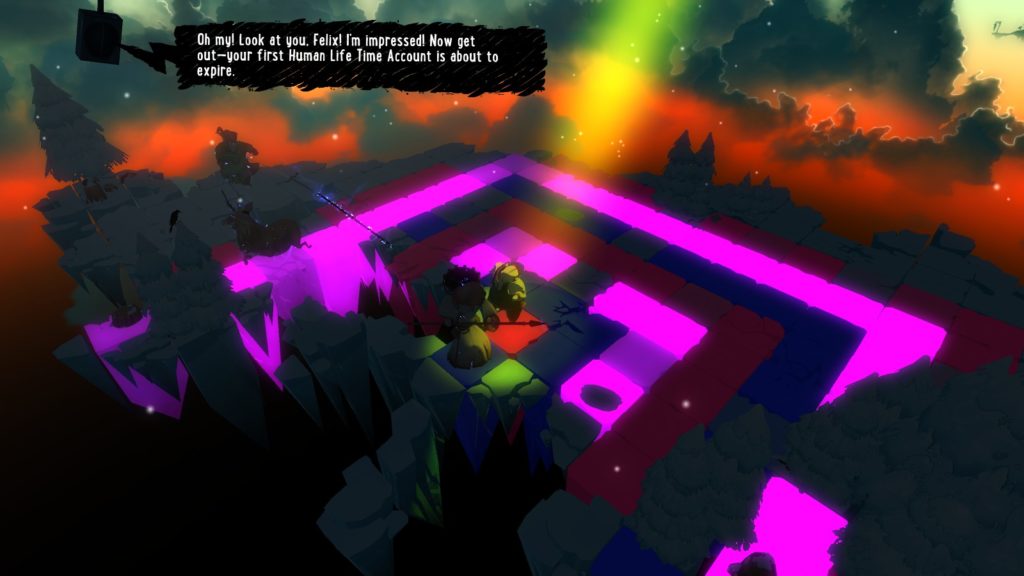 I thoroughly enjoyed my journey through the stages of Felix the Reaper and would absolutely recommend that you pick this game up when you have a chance. The world it is set in is so vivid and creative that I almost wish the creators had taken the idea and written a book about the universe Felix and Betty reside in. The characters are memorable, the art style is charming, the music is pleasant, and the puzzles can be incredibly challenging. 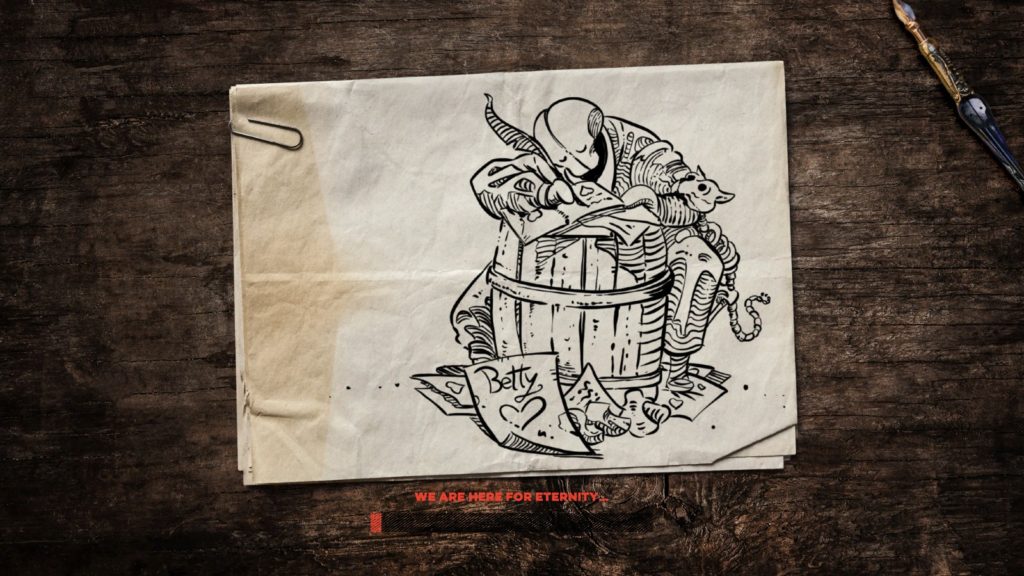 Tags: 3D, comedy, grim, pc, puzzle
Summary
Felix the Reaper is a surprisingly creative and entertaining 3D puzzle game that has an uncanny way of twisting dark humor and romance. If challenging puzzles with a nice background story are your thing, you can find Felix the Reaper on Steam on October 17th.
Good
Bad
9
Amazing 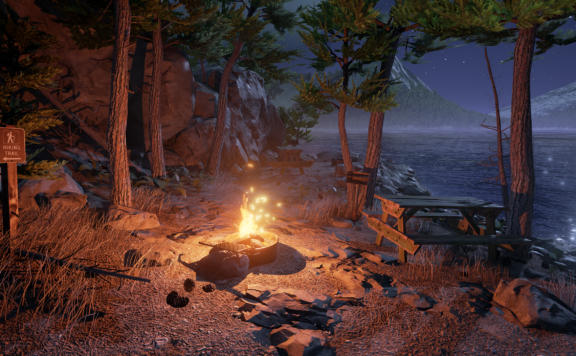 The developers over at Kong Orange have successfully danced their way into our hearts with the delightfully romantic and macabre puzzle game Felix the Reaper. If you enjoy grim humor and challenging puzzles set against a creative theme, the...
10
Average User Rating
1 vote
Have Your Say!
Your Rating: 0
Submit
Write A Review
Genre:Adventure, Dark Humor, Puzzle
Rating:9
Developed By:Kong Orange
Publisher:Daedalic Entertainment