Guan Yu, the God of War, has never sounded so bored. Perhaps it’s because I had to play with the English dub before release, but I really really wish I hadn’t heard the English voice over. Guan Yu’s anguished voice may just be him voicing his boredom with China’s barren landscape or the mundane side quests he has to complete at my command. However, Guan Yu is damned good at killing people in droves, in throngs, by the legions. Throw whatever large group word you want because you’ll be killing that many soldiers before finishing any chapter. You’ll turn your favorite character into the widow maker of all of China but very little of that feels either rewarding or fun. This is our Dynasty Warriors 9 review.

So what does Dynasty Warriors 9 add to the musou mix? Crafting (and subsequently gathering), a massive map that is used for every single mission for every single character, side quests, and housing. Crafting and harvesting feel uninspired. Gatherables are spaces around the map and some of the more important ones are found in random clumps. The materials themselves have no life of their own. Nothing distinguishes them from one another other than icons that describe their type. Butterflies hovering over the materials denote their rarity, but none of them really feel different from one another. Crafting is straightforward. If you have the materials and the recipe, you can make the item or equipment. You gain recipe scrolls by completing side quests and main quests. There is nothing more to it than that. It’s bare bones, a checkmark on the open world checklist. In a world where other RPGs do a great job of awarding materials through the character of the world. Dynasty Warriors 9 just doesn’t compete. 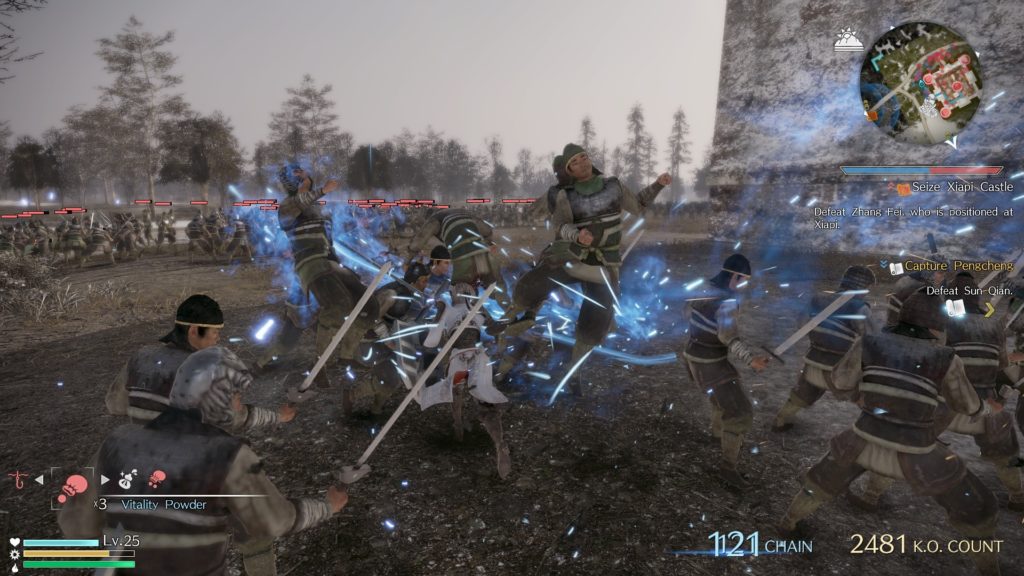 Massive free roaming maps are exciting. They enable a sense of discovery and freedom. Three Kingdoms era China in Dynasty Warriors 9 gives you the freedom but doesn’t fill it with anything that feels rewarding or awe-inspiring. For the most part, the map is empty of life but for “gatherables” that players just run over to pick up. Enemies, most of whom share the same character model but with different weapons, are spread sparsely in the wilderness along with some wild animals. There is little to explore and less even less to consider “adventurable”. The large landmass of China offers little fun outside points of conflict. The map as a whole feels mechanical and lifeless. The landscape rarely changes, despite the map being as a large as it is. Discoverable points lack any excitement and if they are placed on elevated terrain, be ready to have a fit of rage. Elevated terrain stops even the mighty god of war in his tracks, causing him to blink in place.

All of Dynasty Warriors’ quests are a problem. Side quests, when collected together, will commonly spawn all their collective enemies in one location. If a player gathers 5 quests from XiePi, every quest will lead them to one area where all five groups of enemies will spawn in exactly the same spot. This is great for efficiency questing but awfully boring. Quests are given by random, unnamed NPCs as little more than text presented with as little effect as possible. Go here, kill this, return. Rinse, repeat ad nauseam.

Main quests are little different. Go here, kill a person, repeat. These are broken up by a few gathering quests or requests to talk to another character. None of them are vastly complex or intriguing. This is Dynasty Warriors, though, and this one-dimensional questing can be forgiven, but only to a degree. With the world being so vast, there are fast travel points to places player’s have visited with any character. So killing targets deep inside enemy lines in ridiculously easy. Fast travel inside the base, behind a mile’s worth of soldiers, and slay the one target. Quest complete. On the other hand, chapters can be egregiously long if you stop to fight and capture points between each goal. You’ll find yourself with four thousand KOs before completing a chapter. 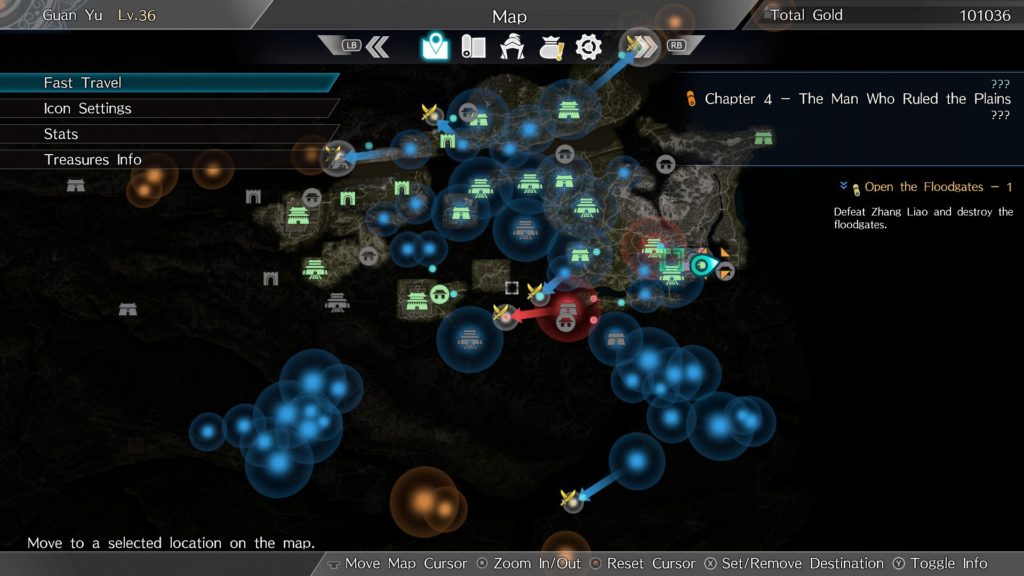 What is perhaps the most insulting part of the open world is how players affect the map. Soldiers spawn at bases that you capture and players can set pushes towards their main objective. If you’re familiar with MOBAs, you’ll enjoy this mechanic. It’s a fun level of tactics where a player can affect the map passively with wave management while acting on another part of the map. It’s great to watch this play out on the minimap, then reap the rewards once your waves crash into a fortress for a giant battle. But your work and your tactics matter little in the grand scheme of the chapter. After every objective is complete, the map will reset itself to a state configured by the designers. This can happen at the smallest of objective completion, wiping any progress a player may have set up on the map. It left me feeling as if there was no point to playing any part of the map outside of running directly to primary objectives and completing the mission. Affecting the map could have been fun, could have deepened the level of tactical decision making, but it achieves neither. The campaign map is an illusion that quickly loses its allure.

Dynasty Warriors 3 was my first introduction to the series. It came during a period where putting hundreds of soldiers on a single screen was unheard of, and I revealed in the hack-n-slash mechanics of the game. That was almost 17 years ago. The first Diablo was only 4 years earlier than that Dynasty Warriors and we’ve only had two additional installments of the Diablo series. Dynasty Warriors has had 6. In Diablo’s short two versions, their hack-n-slack mechanics have grown in strides, changing and improving on known models into what is Diablo 3. Dynasty Warriors has done little to change its combat in 17 years. There is the addition of power attacks that can be used in combo. And while this mixes up button mashing to a degree, fighting other characters is horribly shallow. They will either block your attacks or not. They are a punching bag and fighting anything is like beating a punching bag that will knock you on your ass occasionally just like it was back in 2001. They do little to fight back, even on harder difficulties. It is a formula that worked two decades ago, but it is time for Dynasty Warriors to grow up, to try something new with its combat, and find its footing again. 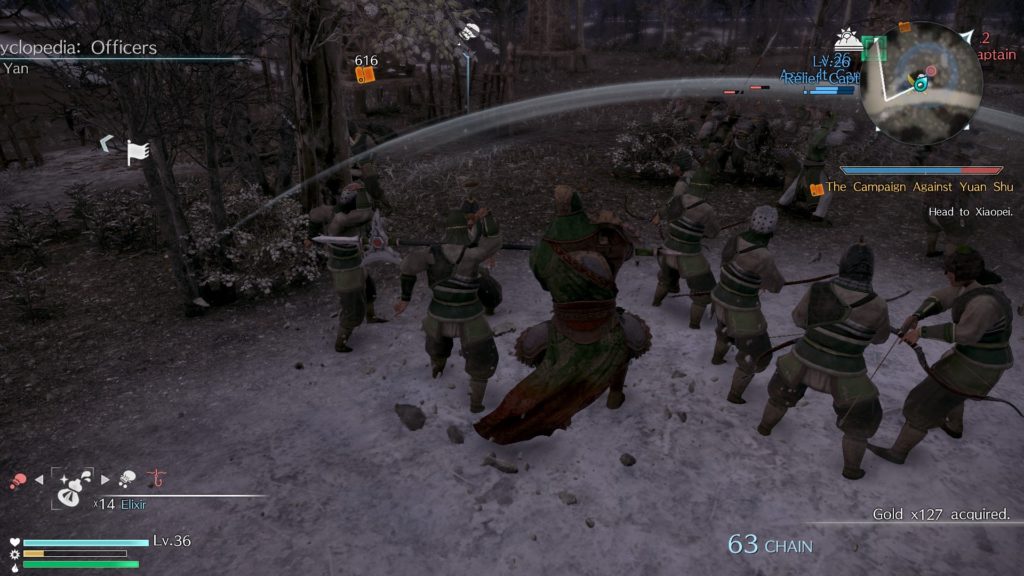 Between shallow combat, lazy RPG elements, and its lackluster open world map Dynasty Warriors 9 fails to improve on any of the previous installments in series. That’s not to say it was completely unfun. But it grows tedious quickly. There are 90 playable characters, and I can’t imagine choosing more than 2 to complete the campaign with. After a few side quests and secondary objectives, I found myself running straight towards primary goals ignoring anything any NPC had to say and skipping every boring cutscene, of which nearly all are of characters just standing around talking. Dynasty Warriors 9 fails where so many other great action adventure RPGs have succeeded and it even fails in what it has always been known for: musou action combat.

Written by
Jacob Semmes
Autism Dad. Ex-Professor. Semmes has a deep love for Final Fantasy XV and still considers Xenogears to be one of the best storytelling RPGs of old.

Dynasty Warriors 9 is the latest game in the best-selling action series by Koei Tecmo. This time, the game features an open world setting that allows players to explore China on a single map. It features "one against thousands" gameplay with complete freedom for the player. Along the way, key missions will unfold and progress the story. In addition, side missions will allow discovery of new regions and locations. These side missions can have an affect on the key missions. The world and the situation are ever-changing. As with previous games, players will fight using a "redefined action system" of combos that react and respond the surrounding conditions. Players will also be able to swim, use grappling hooks, climb mountains and shoot fiery arrows into oil to change the face of battle. Enjoy the epic tale from the Three Kingdoms through your character and others.
4.3
Average User Rating
3 votes
Have Your Say!
Your Rating: 0
Submit
Write A Review
Genre:Action
Rating:Teen
Developed By:Koei Tecmo
Publisher:Koei Tecmo
Modes:Single-player
Series:Dynasty Warriors