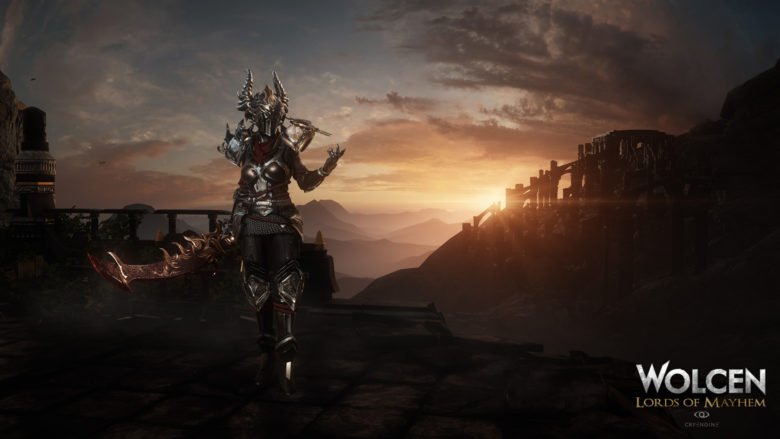 The recently released action RPG, Wolcen: Lords of Mayhem has been taking up a decent amount of my gaming time the last few weeks (check out my beginner tips and tricks if you’re just starting out) and I am enjoying what it has to offer. The small team of 13 at Wolcen Studios has been able to create the same addictive gameplay as other triple-A ARPGs like Diablo 3 and Path of Exile (my usual ARPG hangout). Wolcen has already sold over one million copies but keeping all those gamers engaged and playing is a whole other ball of wax. While the shredding of monsters and ensuing loot explosions in Wolcen are just as satisfying as any other title in the genre, the aforementioned big hitters offer more content and a well-rounded feature set, not surprising considering they’ve both been around for years.

So what will it take to retain the Wolcen player base and keep them from returning to their favorite ARPG? After spending the next few months dedicated to hunting down and squashing bugs in the code, Wolcen studio will have to add more content to stay relevant in a crowded market. It takes time to create additional content and, to keep me playing in the interim, there are 10 key features that the studio needs to add ASAP.

1 – The Ability to save multiple builds.

I really like the Gate of Fates (or as I like to call it, the skill wheel) in Wolcen. There is a lot of flexibility in creating a build and with that comes the need to respec multiple times while leveling up. That said, I find it very frustrating that I have to completely redo my full build every time I want to make a minor tweak. I don’t mind the cost to respec, I just want to be able to edit my current passives instead of starting from scratch. Clicking a node would remove it and any resulting orphaned nodes, giving back the points to respend on the partially completed wheel. Easy peasy. 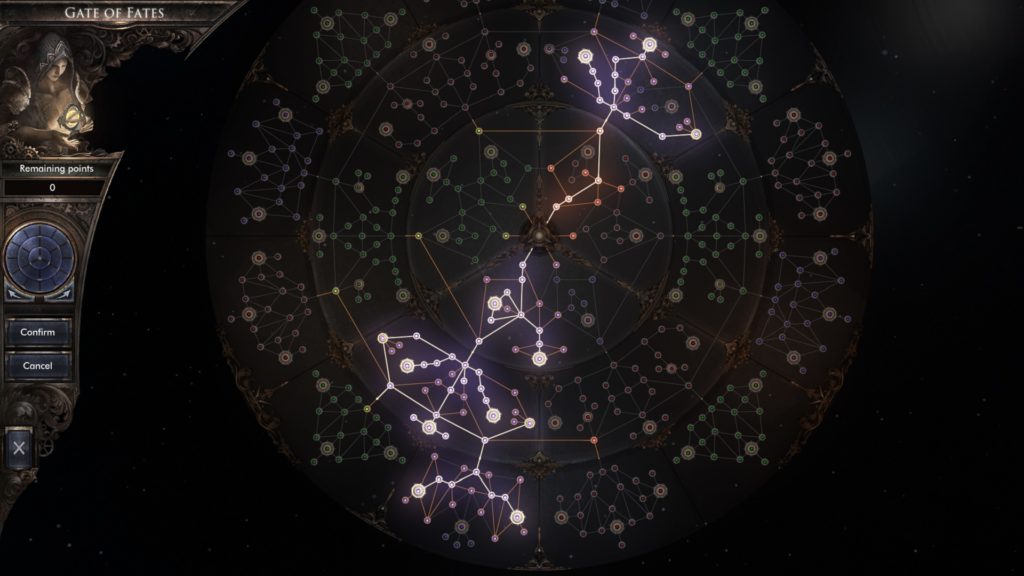 How is it we don’t have the ability to view an item’s stats while it is on the ground? Even the crappiest free to play ARPGs have this option, and not having it in Wolcen is an omission I just can’t accept. You’ll see my need for a fast, steady stream of action repeated over and over throughout this wish list, and anything that slows down the slaying and looting of mobs will slowly push me away from a game. I don’t mind a grind, but at least let me grind, and having to open my inventory screen every couple of encounters to see what I have doesn’t facilitate that.

Put down your pitchfork and hear me out. Not all cash shops are created equally and not all of them are bad. I don’t mind spending a couple of dollars here or there to pick up a cool looking weapon skin or upgraded stash tabs (think Path of Exile here). You can argue that we’ve already paid full price for the game so anything added to the game short of an expansion should be free but, if I’m willing to tip the delivery driver for the pizza I already paid for, why wouldn’t I be willing to throw a few extra bucks to the devs for their hard work?

Having a stash back in Stormfall is good and all, but where I am having trouble is out in the field during Expeditions. I don’t know about you but I am a loot hoarder, that kind of guy who can barely move in games like Fallout 76 because EVERY little thing that hits the ground has to be picked up and carted home. That tendency carries over into ARPGs. It really leaves me miffed when I can’t pick up everything I want due to a lack of inventory space. I’m playing Wolcen for the loot explosions, but what good are those explosions if I have to leave most of the loot behind?

I want to be able to pick it all up and have a way to sell it all off. Whether that comes in the form of a town portal during Expeditions or a vendor somewhere in the middle of the level (not just the random one we have now) I don’t care, but I want a way to sell mid-map. And don’t even mention that I can sell at the end of each level. I’m not going to take the time to trek back through the map to pick stuff up, and you know you aren’t either. 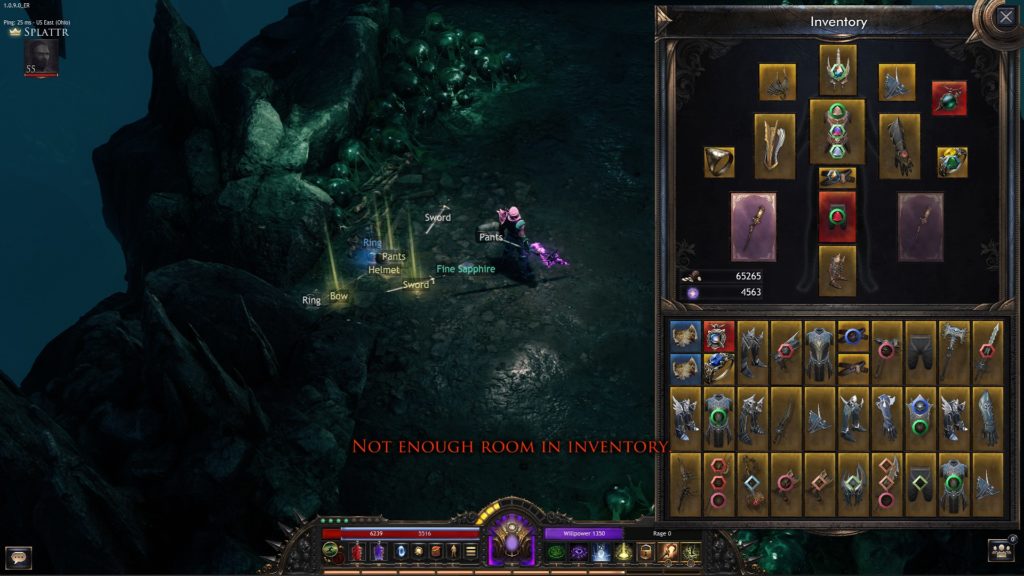 A message no hoarder wants to see.

5 – Quick Sell At The Vendor

So not only do I want to be able to carry more loot, I want to be able to sell it to the vendor quicker. A big piece of this issue was resolved with the recent patch that fixed right-clicking not registering correctly when trying to sell an item but I want to take it even further. I want to be able to set a minimum rarity threshold and have a “Sell All” button to expedite my transaction at the vendor. Yes, I am that lazy. Really, though, what it comes down to is maximizing my time farming, and getting in and out of the vendor UI quickly is key to keeping me engaged.

I have times where I go for what seems like an eternity without finding decent gear upgrades. Expedition after expedition without anything but gold to show for the effort quickly erodes my desire to continue the grind. Some people don’t like it but what I am looking for here is a continual stream of minor upgrades. I also want the legendary and unique items I found to last a while before lower quality items outpower them. I know those two are contradictory but, yes, I want my cake and to eat it too.

Right now Expeditions are the meat and bones of the end game grind. I still have a long way to go before I hit max level and get the uber gear I so dearly want, but with only one main mission type (hunt down enemies and then kill the boss) I’m not sure I will ever make it. The option to add a map or add random modifiers to each run will extend my playtime a little but even that will get stale after I have seen all there is to see. The sooner new mission types are added the better. I know in the end it all boils down to killing monsters and gathering loot, but that can be said for the hook in any game.

I love the idea of building a bigger and better Stormfall being a part of the end game. It gives more meaning to repeatedly running dungeons if there’s actually a way to put all my gold to use. Currently, this is simply done by clicking on icons and starting projects on a UI screen. That’s a decent start for a new game but I would like to see this expanded by adding actual buildings in Stormfall. Nothing would give me a bigger sense of accomplishment than being able to walk around and view the buildings that I helped create. 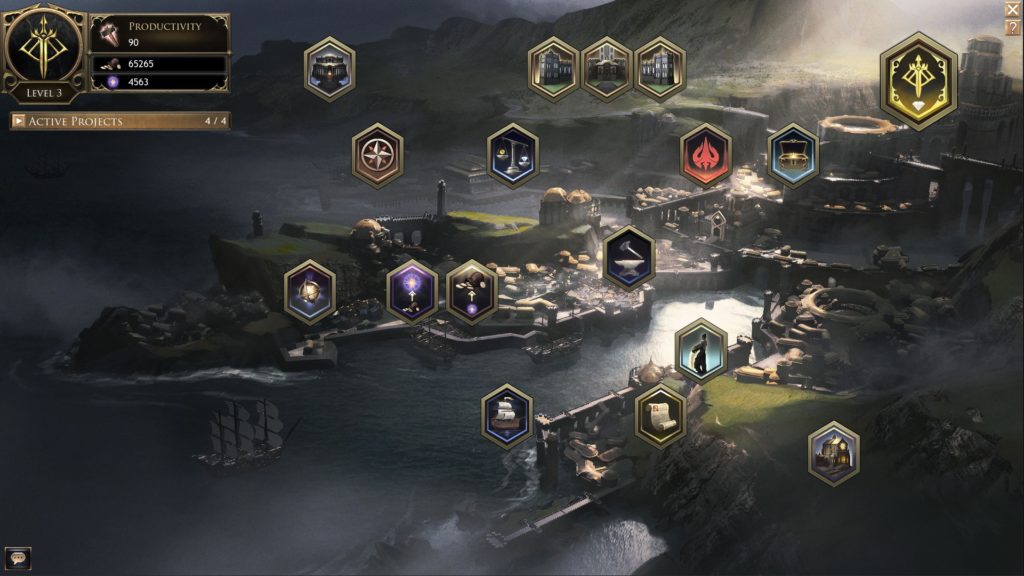 The current city planning UI – It needs an upgrade.

Ok, I’m not putting all the blame for my multiple deaths on this, but it is damn hard to see the enemy attack telegraphs on the ground sometimes. I love the look of all the area of effect spells on the screen but all their bright colors can quickly camouflage the dim red circles and rectangles alerting me to an incoming attack. Something as simple as having sliders added to the settings that allow me to set the intensity of enemy telegraphs or reduce the spell effect visuals would go a long way towards keeping my glass cannon from being shattered over and over. Then all I have to do is git gud and I’ll be set.

I may be getting a little greedy with this one but I would really like the option to influence the type of reward I get for completing an Expedition. There may be a building that I haven’t unlocked yet (let me know in the comments if there is) but if there isn’t it should be fairly easy to add one. Or how about tying loot filters to another tier of map modifiers? Make it extremely expensive so I can’t do it all the time, but throw a dog a bone every once in a while, will ya?

Written by
Mitchell Gassner
Old enough to have played retro games when they were still cutting edge, Mitch has been a gamer since the 70s. As his game-fu fades (did he ever really have any?), it is replaced with ever-stronger, and stranger, opinions. If that isn't the perfect recipe for a game reviewer, what is?
Previous ArticlePathfinder Developers Thank Fans for SupportNext ArticleArathi Basin PvP mayhem arrives in WoW Classic 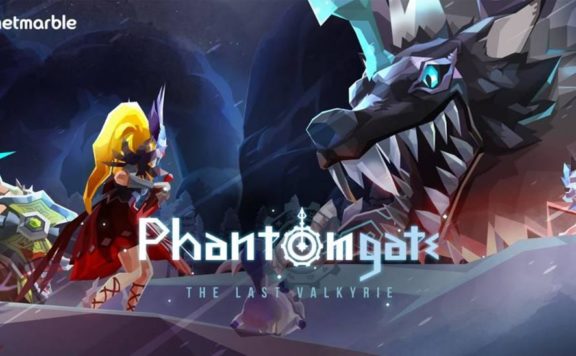