Broken Lines is the latest game from indie developer Portaplay, set in an Alternate history of WW1, featuring “pause and play” style strategy gameplay and a cast of characters to try and keep alive during some absolutely frantic firefights. This is our Broken Lines review for PC.

Keep Calm and Read On!

When I say keep alive I really mean that! The game features permadeath and if you’ve ever played Xcom I can already feel you tearing up as those painful memories of losing your favorite soldier come rushing back, RIP Major Squidworth, you will be missed. Well, this game will hit you even harder as every character comes with there own backstory and traits. Losing soldiers is extremely detrimental to your overall success and once they are gone there is no replacement to hire. You have to carry that loss with you for the rest of the game.

On the lower difficulties, you get two chances, you can revive once and gain a wounded state or status effect. If your trooper goes down again before that effect can be removed then it’s an unmarked grave for them I’m afraid. 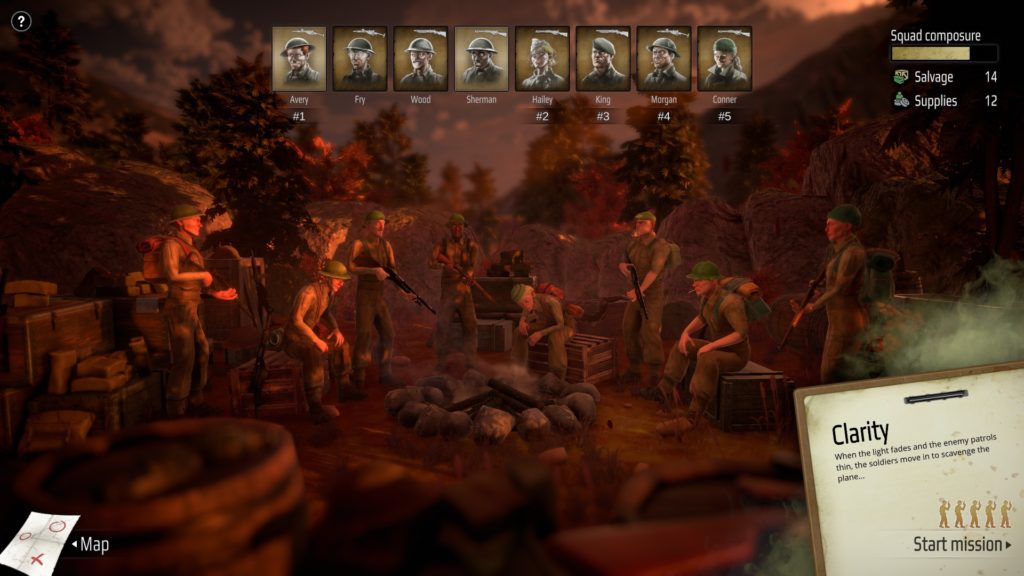 Speaking of difficulty though I want to give a quick mention to the options you have in Broken Lines. Not only can you pick how hard or easy you want the game to be as is present in a lot of games, but this game actually allows you to customize the AI of the enemies to dictate what they can and can’t do. You can enable them to be absolute monsters or a lot more forgiving. Considering the conversations that are happening in the gaming space about difficulty in games I think these options are a nice touch and allow you to tailor the experience to your individual liking. My enemies were monsters, in case you were wondering.

So what do you actually do in this game then? Well to put it as simply as I can you command a team of rookie and veteran soldiers dropped into unknown enemy territory and embark on a selection of missions to try and figure out what on earth is going on and why you are here.

In terms of gameplay, that translates into a hybrid system somewhere between Real-Time and Turn-Based. You see the game doesn’t operate quite how you might expect, you deliver orders to your units in a pause mode then when you’re happy you press “play” and both your team and the enemy carry out the moves in synchronization. Meaning you have to think ahead to what your opponents are thinking/planning and outmaneuver them. Setting up ambushes and flanking will be your bread and butter because you’re going to be outnumbered and fighting uphill (literally and metaphorically) a lot more than you’d like. 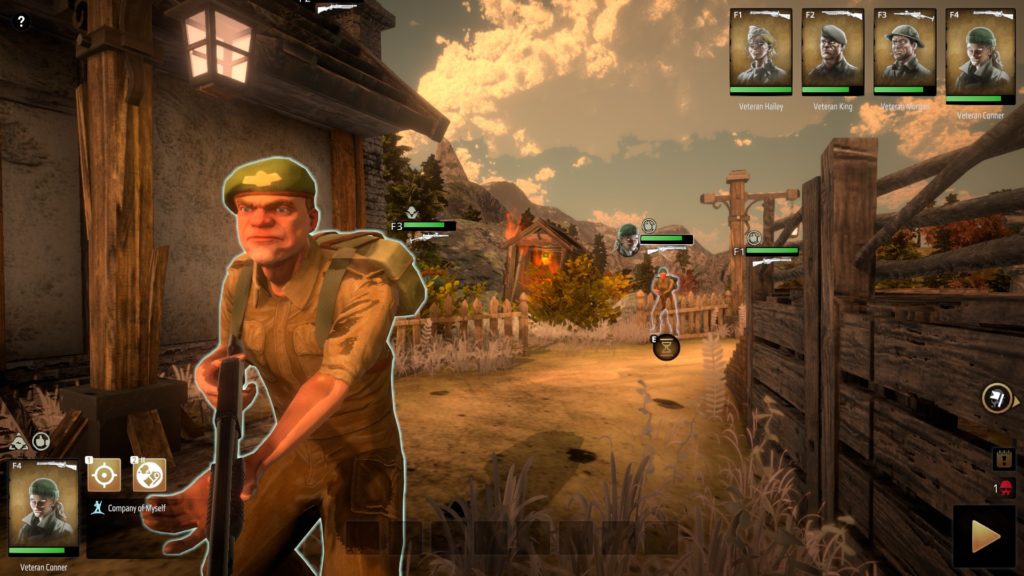 Each soldier under your command comes equipped with weapons, useable items, and traits. Weapons and items can be swapped or expended but traits are unique to the individual solider as I mentioned earlier, one of the first traits you’ll see in action is a large boost to health and endurance. Making that unit perfectly suited to get up close and personal with a shotgun rather than sitting in the back popping off shots. Using machine guns and grenades to suppress opposition will be vital to your success, combining all these things together effectively is what makes the game tick. Units automatically fire at the nearest enemy so you don’t issue attack orders. Something that to be honest, I wasn’t entirely sold on. While it is possible with certain abilities to issue direct target attacks once that special attack is completed the AI turns back to another enemy unit. Adapting to this is part of the challenge I suppose but for my snipers, this became a little irritating. Especially if I was trying to set up my people in more advantageous positions and one of them just decides to take a pot shot with a 0 or 1% chance of hitting. Thanks, guy, now all of them know we are here. 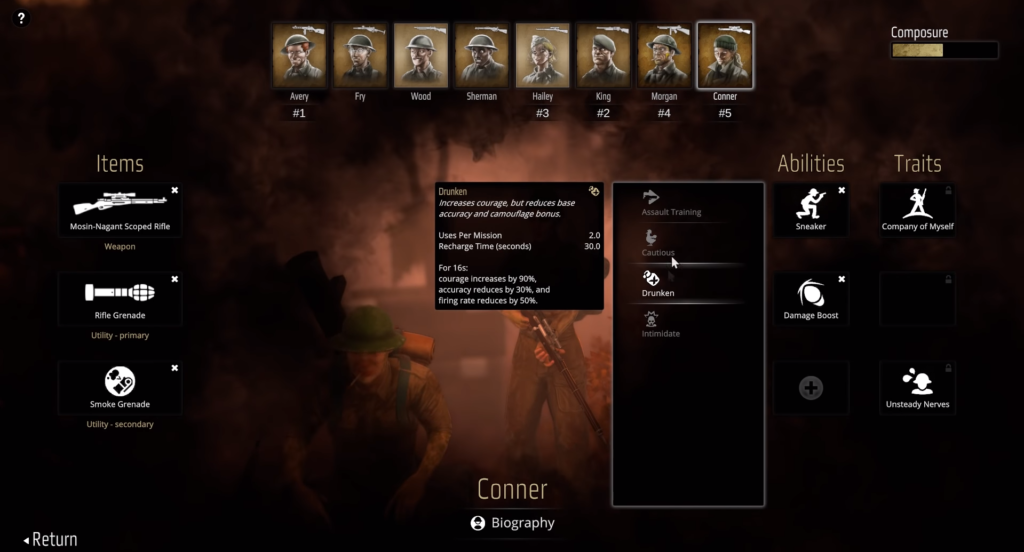 Especially if that shot is uphill. See this game employs elevation as a highly important position to be in. Leading to more than one occasion where after nearly losing people trying to take well-entrenched positions, only to then have to defend against a counter-attack I found myself quoting a certain Jedi with glee as I was able to deal out a lot more damage than previously possible. This game does not employ procedurally generated locations, you can tell these missions were designed by a person. A person that took glee in making sure you were going to have a bad day.

Percentage counters show you what the chance of your soldiers and the enemies have of hitting each other are from the position you are thinking of moving them too. It’s actually a very helpful and necessary system that changes depending on your tactical awareness, being suppressed, the type of cover you/they have or if you are flanking. Another thing you have to worry about is soldiers’ morale, see not only do you have to constantly keep an eye on health, suppression fire, and expendable items but troops can be sent into a panic if their Composure bar is filled. This can lead to soldiers hunkering down and not following orders or going off the deep end and getting themselves killed. 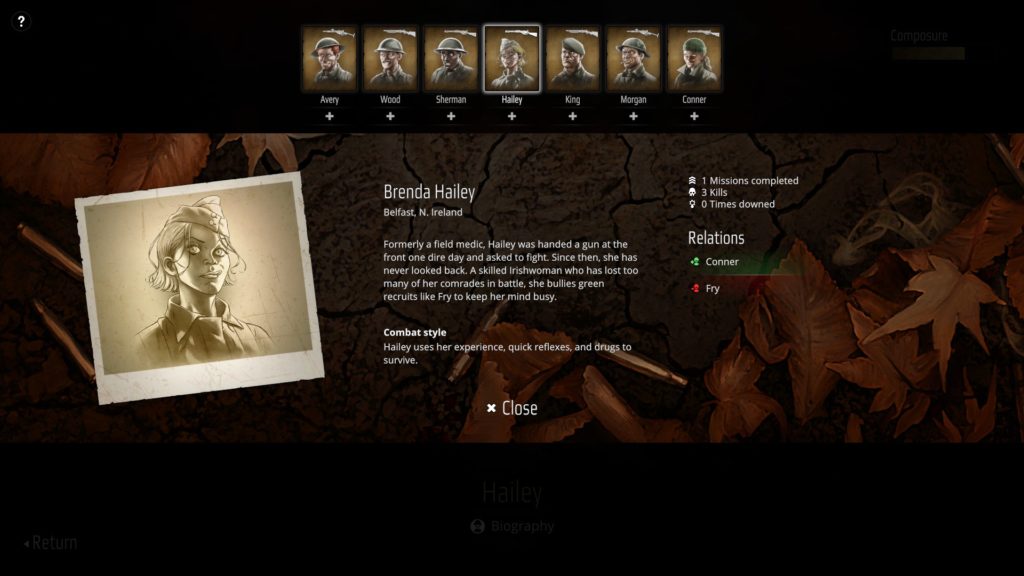 The other portion of the gameplay comes in the form of text-only choices. These can happen between missions and depending on how you to choose to deal with them can have both positive and negative effects on your efforts. Combine this with choosing what missions to go on based on what your soldiers recommend, and often disagree, managing your choices is something to keep in mind. you could choose to destroy a radio tower or not, in another, you can choose to help a lost girl who doesn’t speak English. You have no way of knowing what the “correct” choice is. The rewards obtained from dialogue options, barring a couple, aren’t particularly worthwhile.

Broken Lines also has multiple endings. Replaying the campaign several times is certainly something that is not only an option but a recommendation. Taking missions in different ways or going via different routes, making those different choices to see what could have been. I will be playing it again that’s for sure. Playtime for everyone is going to vary but I’d say once you get the hang of it you can complete a run in about 8-9 hours. 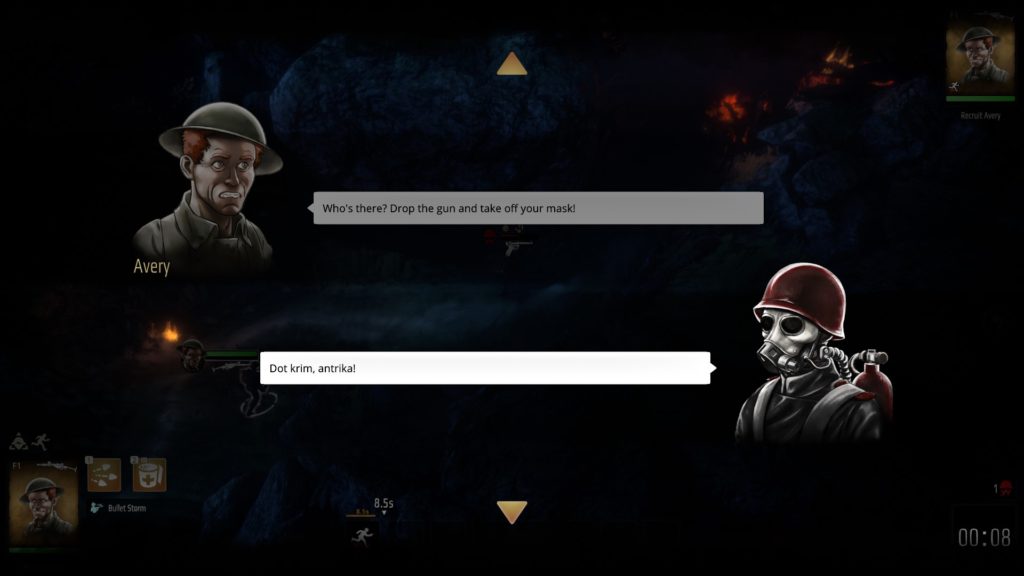 Unfortunately, Broken Lines‘ style of play also has several shortcomings. Firstly, it’s far more effective to stick with a winning formula than to experiment when it comes to weapons and items, especially with permadeath being a constant threat. For instance, I had two snipers and two SMG gunners and one shotgunner, just in case. Moving in Shock and Awe style with the gunners meant that nine times out of ten I could take out the opposition before they had time to react. The shotgunner can knock down enemies, giving me precious time to deal damage while they are down or maneuver my troops into more favorable positions. Snipers can deal with any unforeseen aid that appears from the sidelines or hiding in hard to spot places.

Secondly, while there is a merchant that sells equipment between chapters, while it is tempting to just buy gear from him straight away it’s unnecessary. Plus if you make the wrong decision you won’t have enough scrap to buy the better stuff from him later on in the game, as items refresh between missions so you can’t save up for next time to get something you can’t afford. Made more irritating by the fact you can’t sell the extra gear that you have; there is an option to dismantle them but it only frees inventory space.

A personal gripe that also bugs me is that while the pause and play system works great when you have enemies to engage it is not so great when you are simply trying to move from A to B. Regardless of if there is a tactical fight or not, after 8 seconds the game pauses and while units will retain their orders to move if it’s not completed, it is frustrating that they won’t simply continue moving as the game will automatically pause when an enemy soldier is spotted anyway. 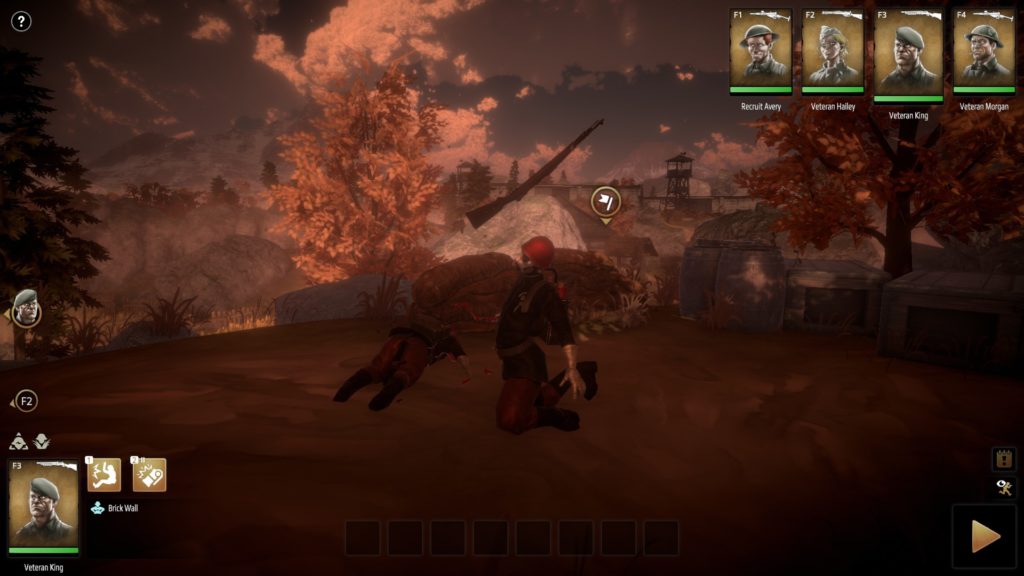 He’s Having A Bad Day

All in all I actually really enjoyed my time with Broken Lines, it has some issues and quirks that I would rather have been executed differently but when everything is smooth and the enemy is bearing down on you, the bullets are flying and your troops are on the verge of panicking, firing off desperate grenades, countering RPG troopers and enemy snipers, this game is fantastic and in the midst of the carnage, you may even get flashbacks to the  Company of Heroes, Jagged Alliance or Commandos games. In my book that alone was enough to keep me playing. Just one more mission before I go to bed… even if I did accidentally kill my own man on the second chapter with friendly fire, I can pull this back.

Tags: Broken Lines, pc, PortaPlay, review
Summary
If you are a fan of strategy games this is a great entry for the genre. Regardless of if you prefer turn-based or real-time, this game is worth checking out. You will want to play this through more than once and the love that the developers have poured into this game shines through despite a couple of hiccups. I hope this game does well enough for a potential follow up of some description so they can expand on some of the features this game was aiming for.
Good
Bad
7.3
Good 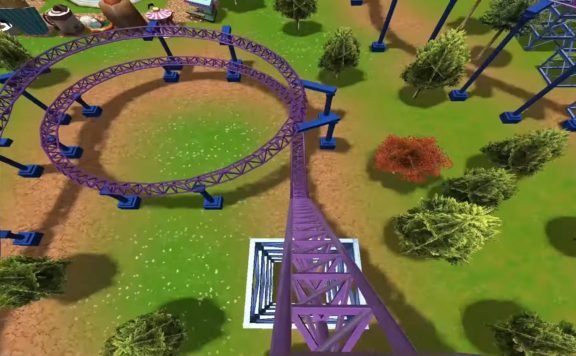 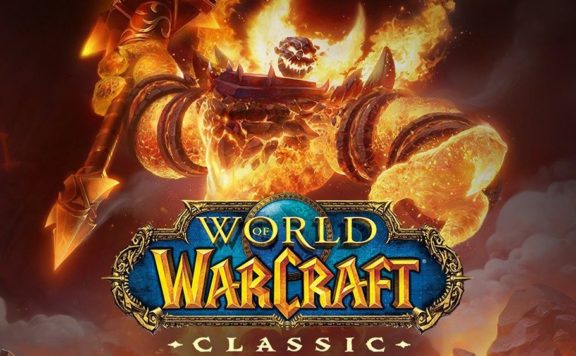 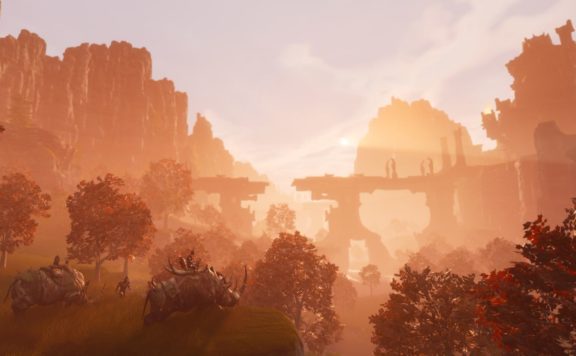 Broken Lines is the latest game from indie developer Portaplay, set in an Alternate history of WW1, featuring “pause and play” style strategy gameplay and a cast of characters to try and keep alive during some absolutely frantic firefights....
0
Average User Rating
0 votes
Have Your Say!
Your Rating: 0
Submit
Write A Review
Genre:Strategy