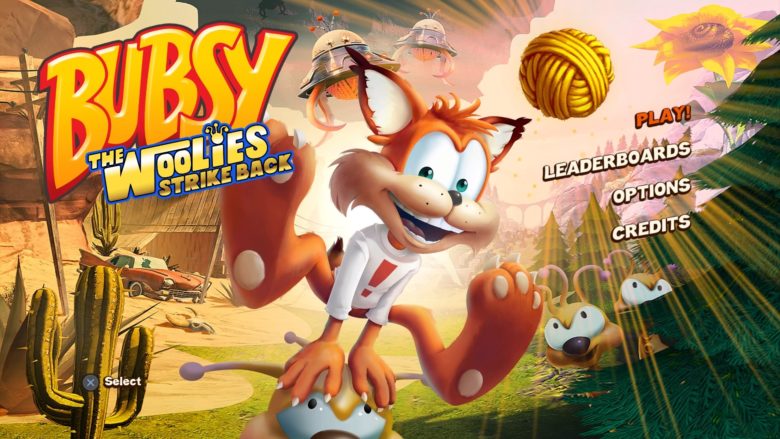 There comes a time in every person’s life where they have to eat a little crow. No, I don’t mean that you are literally dining on a tiny, carrion fowl, I mean that you have to admit you were wrong, confess your oversights. Confession is good – keeps us humble. Not one day after making a joke at the titular character’s expense, Bubsy – Accolade’s bobcat with bite – crashes back onto the scene in Bubsy: The Woolies Strike Back with a new trick or two up his sleeves. Yes, he does have actual sleeves and no, he will not be eating any crow. This is Bubsy: The Woolies Strike Back review for PC.

If you aren’t familiar with Bubsy, he made his debut on the SNES and SEGA Genesis in 1993 in Bubsy: Claws Encounters of the Furred Kind. In an era saturated with anthropomorphic animals with attitudes, Bubsy wasn’t a huge standout. However, his introduction to the gaming world was rife with pop culture references and high octane yarn collecting with challenging platforming fun. But, time and sequels were not kind to this kitty. He was last seen in 1996 in Bubsy 3D: one of the worst 3D titles ever made. From there, Bubsy’s future unraveled into obscurity.

Enough history: what is Bubsy: The Woolies Strike Back and how is it? 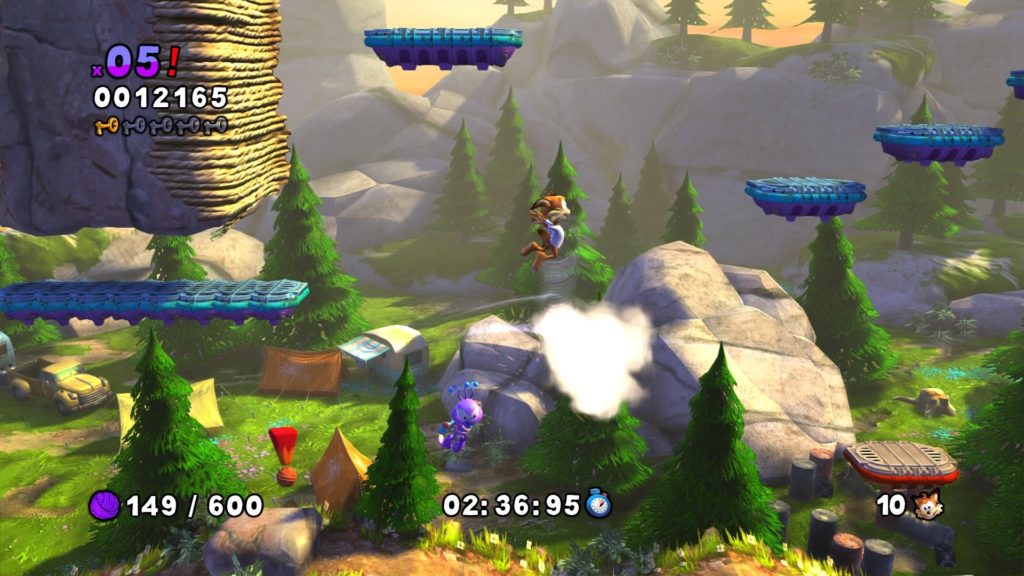 Bubsy: The Woolies Strike Back is a classic platformer with collectibles. It harkens back to a more simple time in gaming, but with some present-day advances. Instead of having input codes to continue level progress, there is a map with three optional challenges per level (don’t die, collect all the t-shirts, unlock the vault-o-wool).

As stated before, it’s a pretty simple formula and it has a pretty simple story to match: Bubsy is heir to the legendary Golden Fleece, which he subsequently turns into a Golden Yarn Ball. That glorious ball is then stolen by the Woolies – a bipedal, armless alien race under the leadership of the two-headed Twin Empress Poly and Esther. It seems like the Woolies’ sole reason for existing is to steal Bubsy’s yarn… again. No one ever accused this franchise of being story-rich. So, how is gameplay?

As far as gameplay goes, the mechanics are pretty straightforward: you jump, you glide – which, not even Bubsy knows why a bobcat can glide, and you can pounce – Bubsy’s latest trick. Controls feel solid, with the exception of the pounce. It feels a little hit or miss… literally. 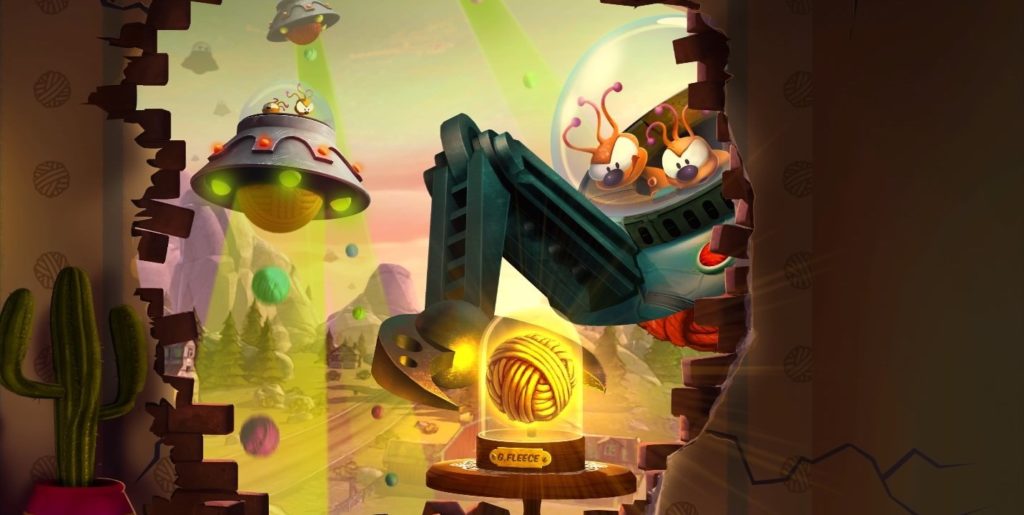 Throughout your jumping/gliding/pouncing, you collect yarn balls and t-shirts – Bubsy’s favorite accessory. Three modern updates to the Bubsy franchise that make gameplay much more enjoyable are the ability to fall from a greater distance, the presence of an overshield, and a level selection map… which, we need to talk about that.

The game is thirteen levels long with a tutorial. Within those thirteen levels, there are three zones with two level types: the regular platforming and boss battles. This is where Bubsy takes a sour turn: it feels content light for a game in the $30 USD price bracket. To be fair and put things into perspective, Bubsy’s debut game had sixteen levels. There were, however, a greater variety within the level zones.

Aesthetically and musically, Bubsy: The Woolies Strike Back is whimsical. It’s 3D style plays well with the environments and most of the character models. Sadly, one of those is not Bubsy himself. There is something about him that just seems off. Maybe it’s his fixed grin or slow blinking or the proportion of head-to-body ratio that’s unnerving. This is a big bummer because the rest of the art works – even the stills of Bubsy. 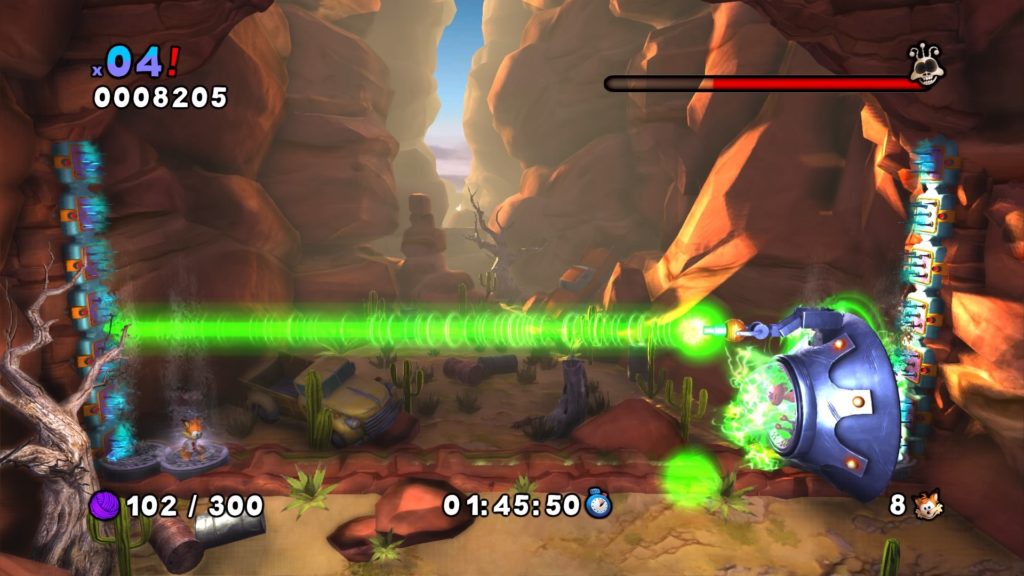 Bubsy is a cat-out-of-time trying to find his fit in a world that’s memories of him haven’t been too endearing. Bubsy: The Woolies Strike Back is a moderately enjoyable game, but it just out of place within it’s current price bracket. Aside from the price, there are moments where Bubsy’s commentary feels rather forced (occasionally annoying), but other times he delivers one-liners that made me chuckle. It feels like Bubsy is trying too hard to be Deadpool-esque in relevancy and self-awareness.

So, should you give the bobcat a shot? If you like classic platformers with collectables or you have fond memories of the original, I think so… but I would wait for a sale. Bubsy, you’re ok in my book… you just need to calm down a little bit.

Written by
Damien Gula
Born in the heyday of mullets and the El Camino to a tech-foward family, Damien (a.k.a. Dame, PastorDame) quickly embraced the reality that “normal” is just a setting on a dryer. Damien is a pastor by trade and loves talking with anyone who is interested about life, God, and video games (in no particular order) - so, much so, that he and fellow MMORPG/GameSpace writer Matt Keith (Nexfury) create a podcast dedicated to that conversation. At the end of the day, Damien is a guy who loves his wife, his Mini Schnoodle, and crafting gourmet bowls of Mac N’ Cheese.
Previous ArticleSpellspire Launches for Switch – Words + RPG ActionNext ArticleLA Noire on the Switch Launches November 14th, and here’s its snazzy trailer 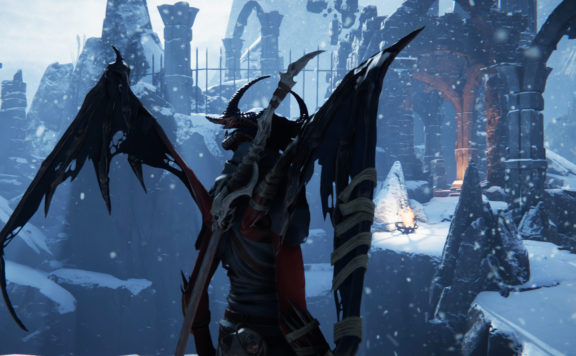