An indie title from VICO Game Studio that seeks to give us a decidedly old school approach to a wrestling game, arcade feeling with a much higher emphasis on having fun than being a simulation game seeking to emulate being inside the squared circle professionally. Is this a new crowdfunded success story or will we add to the list of games that didn’t live up to campaign promises? This is our Chikara: Action Arcade Wrestling Review.

Upon first booting up Chikara: Action Arcade Wrestling (CAAW) you are instantly hit with the feeling that this game is looking to channel a feeling of a bygone era, specifically that of the arcades. Some of you might not remember this but there was a time when in order to get our gaming fixes we had to wander outside our cosy homes and seek out the communal gaming gathering known as “The Arcade”. These games were simpler than our modern contemporaries, often sporting a joystick and two buttons as it’s control scheme and that is exactly what CAAW has decided to emulate here. Everything in the game is performed by directions and one of two buttons or pressing them in unison, this means that barrier to entry is incredibly low and anyone can pick up and play this game without needing to learn complicated button inputs or combos. 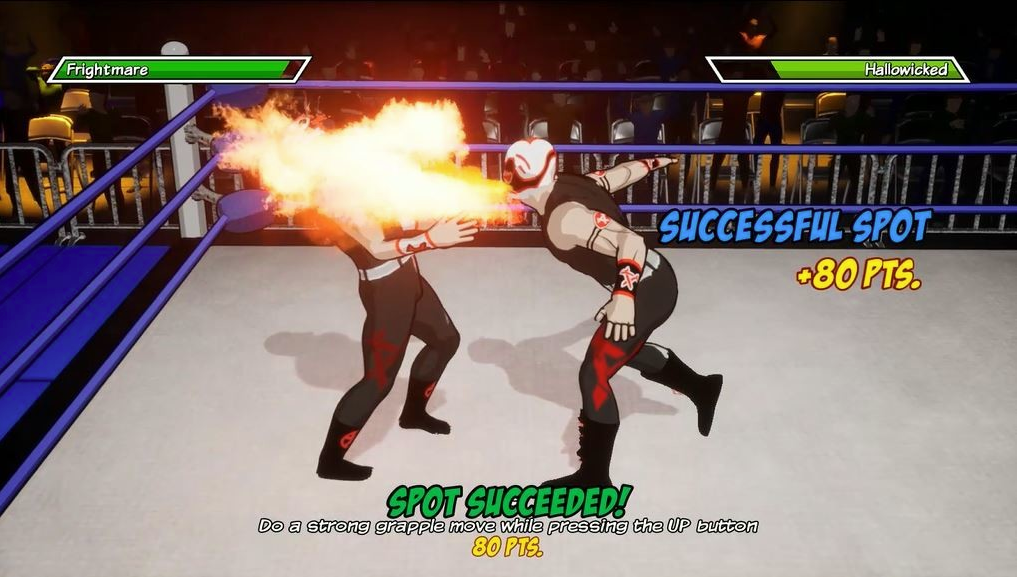 Getting into the game is also straightforward, you pick your match type, select your wrestler and arena then your off! Everything has been drilled down to its simplest and easiest to understand mechanic to make sure that the focus is getting into another match as soon as possible. Speaking of the matches, how does the gameplay itself fare? Well as I said everything is a two-button affair. One button allows you to strike while the other allows for grapples, holding either button instead of tapping gives you heavier variants of these attacks and mixing them up together allows for some interesting ploys to psych out opponents looking to counter you.

To perform specific moves once you have an opponent grappled you press the grapple again with a direction or none at all allowing for up 5 different options per type of grapple. This system is certainly entertaining even if you are on the receiving end you will certainly admire the animations of these gladiators body slamming each other into the ground. Not to mention the times when out of nowhere a wrestler will suddenly breathe fire or shoot lightning from his hands. “Thanks, game, I was having enough problems staying on my feet without now having to fight Raiden the god of thunder as well” may be a sentence that runs through your mind more than you may have first expected while playing this.

You also have powerups that buff your character in various ways giving characters massive advantages against there opposition, fear not though as powerups can be stolen if you successfully pull off a reversal. You can also spend powerups to get up off the floor in an instant to stop enemies from taking advantage of your predicament! A well-timed spend of your powerup could seriously mess up someone trying to jump from the jump rope and reverse the flow of the match dramatically. 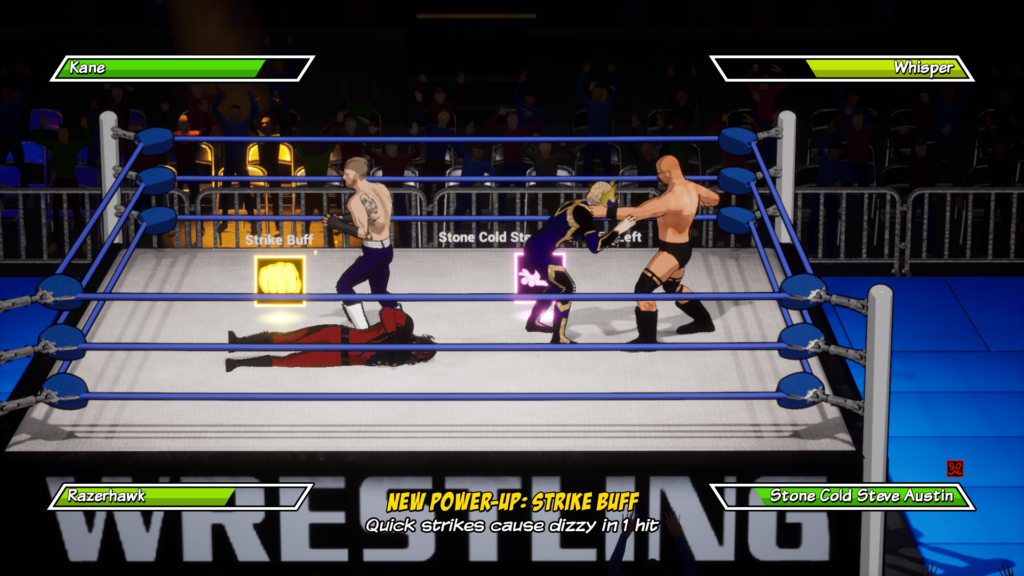 However, for as much as I was enjoying the gameplay itself, I would be lying if I said my experience with CAAW was a flawless one. The AI of your fellow wrestlers whether they be teammate or opponent is somewhat lacking, regardless of what difficulty setting, I played on I found there were multiple instances of the AI standing there motionless for a few minutes and then coming back once I tried to go for the pin. One of the weirdest and somewhat frustrating aspects of actually playing the game though comes in the movement, despite the fact that the game takes place in a 3-dimensional space someone forgot to tell the wrestlers this fact. The characters will only face left or right and can’t interact with each other unless they are directly opposite each other otherwise the animations won’t connect. No matter how much I enjoy the cell-shaded graphics and the over the top antics, that breaks the flow of a match in an instant. It feels like the game was originally designed to be a pure 2D experience and perhaps with future updates this aspect of the game might be improved but as it stands right now I really didn’t like it, it also made multiplayer a bit ridiculous to watch with wrestlers clipping through each other as often as they were making contact. 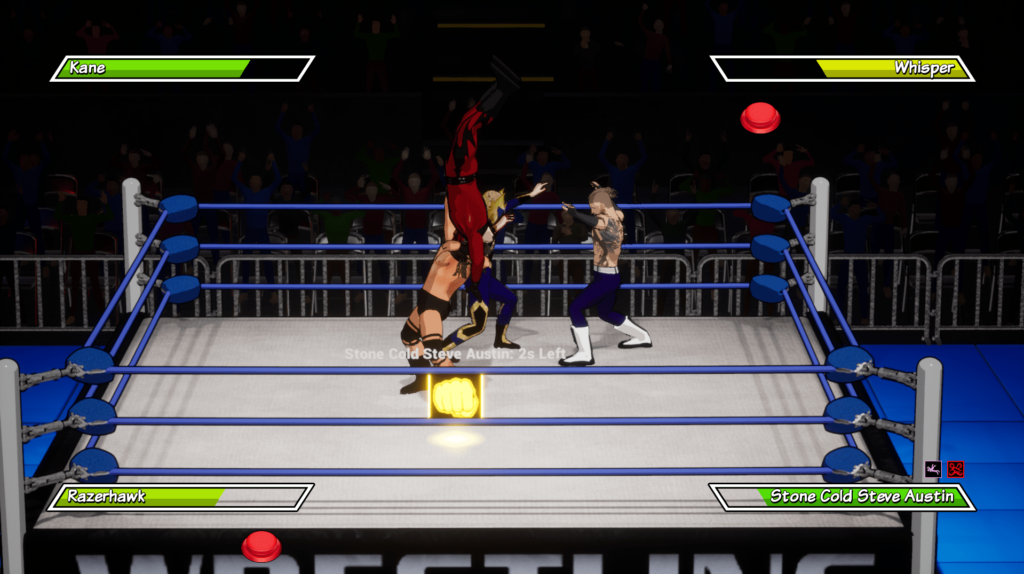 Speaking of multiplayer, specifically online multiplayer, this is where the game falls down for me. The first major issue is at the time of writing this review there is only one match type you can select and that is 1V1, all other options are listed as coming soon. This is very disappointing as nowhere on the store page can I see any mention of the game not being feature complete. So that meant I was unable to play alongside my co-op buddy and instead was forced to compete against him, this unfortunately also proved to be a challenge.

When playing single player I encountered a bug at the very beginning that caused me to restart the game, the controls weren’t recognizing my input in the tutorial for some reason but after that all was fine. The same can’t be said for attempting online games. The game froze numerous times when trying to connect us, had crashes to desktop while in the middle of playing matches, input delay and framerate issues caused both of us to have hysterically bad teleporting wrestling moves on display. In the end, we managed to play a best of 3 set (which I won) however the experience left us not wanting to attempt it again, which is a shame as I do genuinely believe this game has such potential to be enjoyed by everyone. One other thing I should quickly mention the match types for my wrestling aficionados, even in local multiplayer there is no tag team system. You can only compete in tornado tags where everyone is in the ring at once. 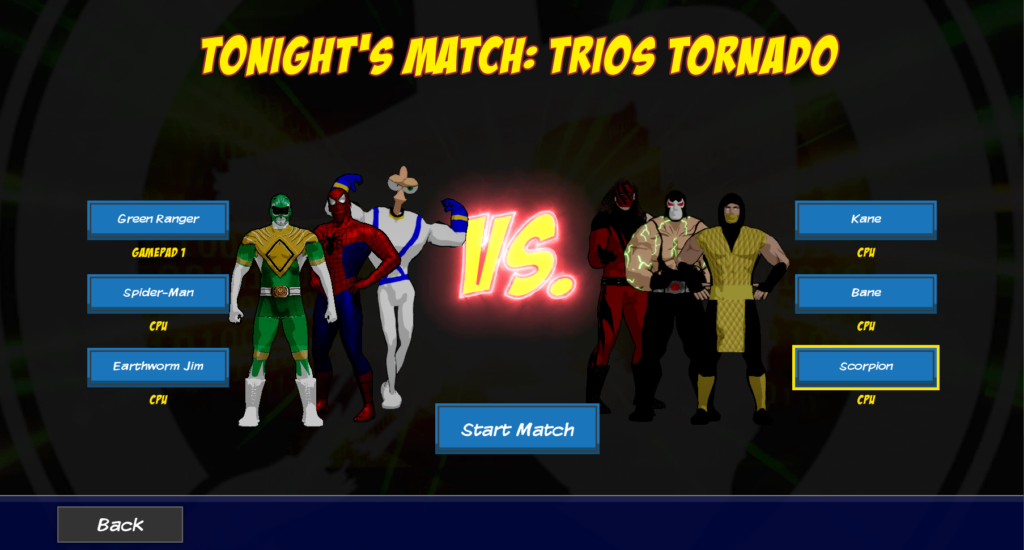 With all that said though there is one big redeeming feature this game has that I think will please the vast majority of people who are looking to pick this game up. The ability to create custom wrestlers and arenas. It would not be an exaggeration to claim this is the game’s best aspect, the level of freedom this creation suite gives you is amazing. Couple that with a genuinely passionate community that has already uploaded some incredible creations I was very impressed. Many of the WWE is already ready and waiting to be grabbed such as The Rock or Stone Cold but stranger choices such as Earthworm Jim, Ash Wiliams, Scorpion from Mortal Kombat and Zangief of Street Fighter fame are right alongside them.

Thanks in part to the games graphic style none of these wrestlers feel or look out of place either! The best part though is the fact that the creation suite has many signature moves of other characters waiting for you. The Rock has his people’s elbow, Zangief has his Spinning Piledriver, Scorpion can actually breathe fire like he’s performing a fatality. The sheer joy in seeing how much they’ve given you to work with really does make you feel like you are limited only by your own imagination. Or you can just download the ones other people have made, that works too. All in all, I think this crowdfunded game has some crooked edges but it deserves to be considered a success story.

Thanks to the developers for reaching out and giving us review codes.

Tags: Chikara: Action Arcade Wrestling, indie, pc, review
Summary
Chikara Action Arcade Wrestling is a game you pick up and play for a few hours in short bursts that you have fun with but spend hours if not days fine tuning your custom creations. The game really wants you to just have fun with it and not take it too seriously. In that aspect I think it’s safe to say they succeeded.
Good
Bad
6.5
Fair

An indie title from VICO Game Studio that seeks to give us a decidedly old school approach to a wrestling game, arcade feeling with a much higher emphasis on having fun than being a simulation game seeking to emulate being inside the square...
0
Average User Rating
0 votes
Have Your Say!
Your Rating: 0
Submit
Write A Review
Developed By:VICO Game Studio
Publisher:Reverb Triple XP