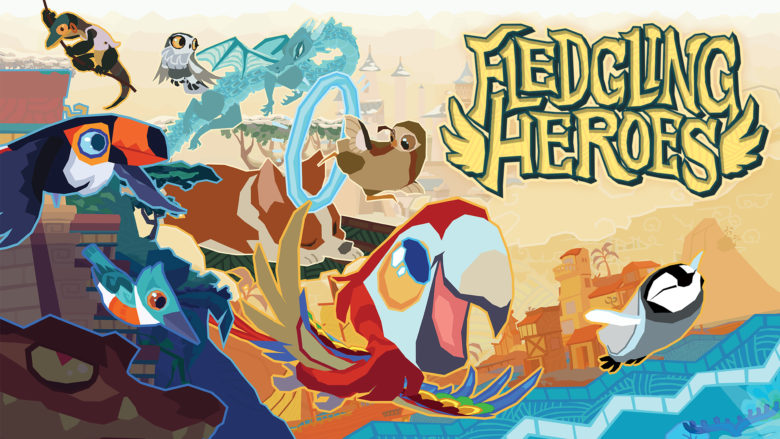 Side-scrolling platformers are typically not my first video game of choice. Part of this is probably due to the fact that I’m no longer a spring chicken (pun intended). Something in the preview of Subtle Boom‘s Fledgling Heroes called out to me though. Perhaps it was the softly colored artwork or a certain Super Mario Bros. like familiarity that called out to the long-time gamer in me. Whatever the reason I’m glad I heeded my inner call as Fledgling Heroes is a delight to play. Welcome to our Nintendo Switch review of Fledgling Heroes!

Simple In Nature But Fun! 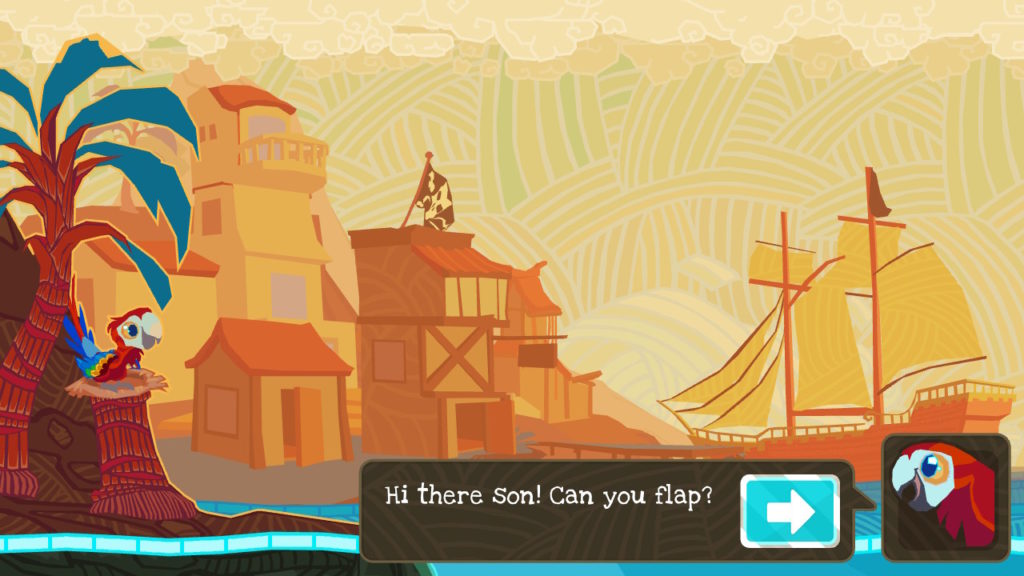 Flapping is as easy as hitting the “A” button!

First off, a fledgling is defined as “a young bird just fledged”. So okay that’s not very helpful. Taking this research one step further, “Fledging is the stage in a flying animal’s life between hatching or birth and becoming capable of flight.” So taking a long way around, certainly not “as the crow flies”, you play as a bird in this game, or to be more specific, as one of a flock of playable birds. There’s not a lot of meaty stories here, just know you’ll play as one of several bird types including Biscuit, a parrot, Benny a penguin, etc. Each bird has its own unique mode of travel. For example, Biscuit is good at flying, Benny can swim underwater, Kingfishers can swoop and quails can run. 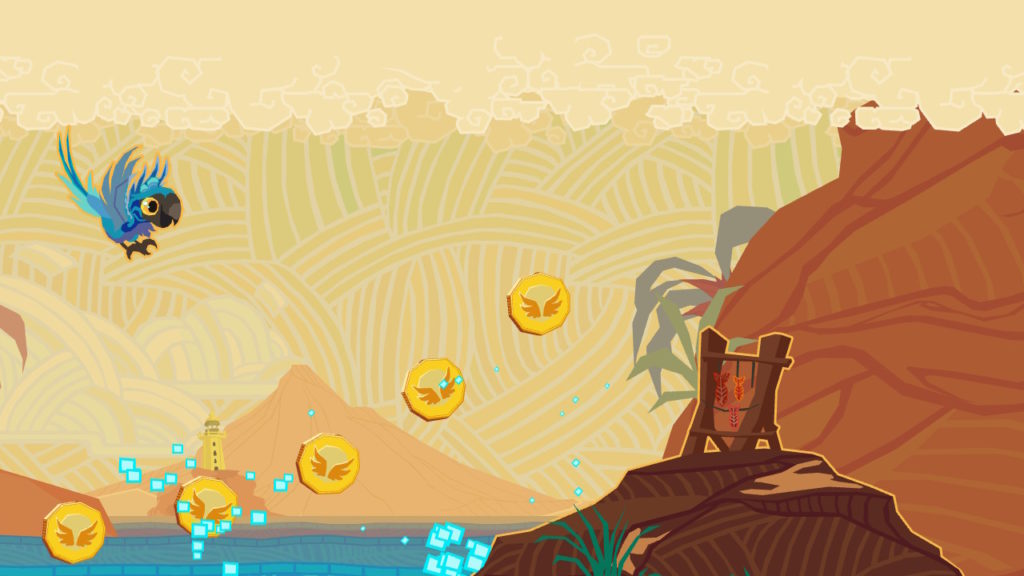 All action takes place in a relatively fast-paced, side-scrolling action. You’ll flap, swim and run your way through beautiful, soft, side-scrolling artwork filled with hazards to avoid, enemies, to dodge, and lots of shiny things to collect if you choose to do so. 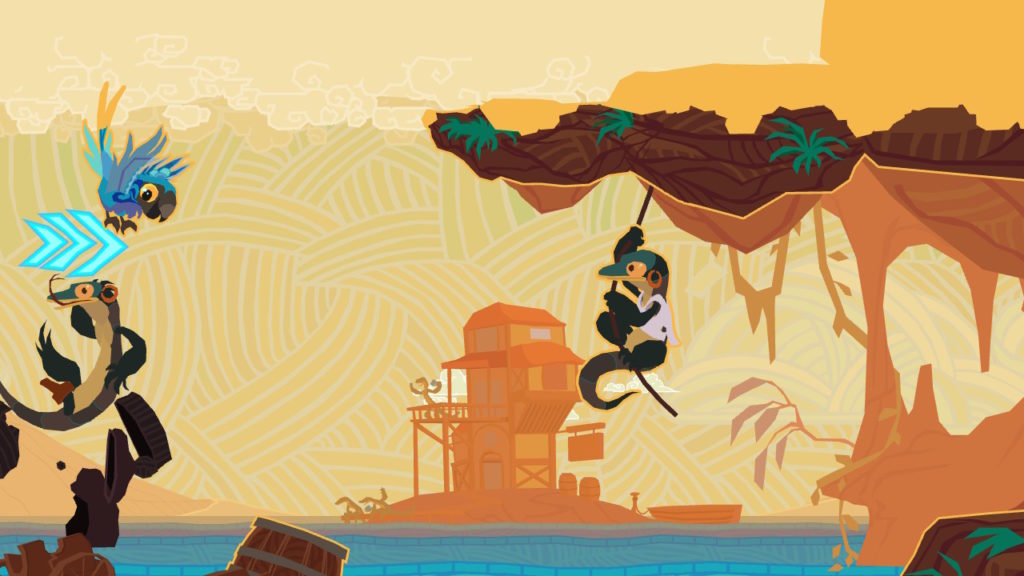 Simple To Play, Tough To Master

Control mechanics are pretty simple. Use the left joy-con and the “A” button to move. As a prime example for controlling Biscuit, tap “A” to flap, hold “A” to glide and you can bounce if you hit the ground at the right angle. While this control scheme seems simple there isn’t a lot of flexibility. There’s no way to fly back, hold up, or slow down for example. And in gameplay reminiscent of classic Super Mario Bros. you’ll navigate from left to right while avoiding enemies high and low, collect coins, golden leaves, and treasure to unlock different birds and cosmetics, etc. Each level has one or more checkpoints. In some cases, if you take too many retries you restart from the beginning of the level while carrying over some of your progress. You’ll also start a level with an objective(s) in mind, e.g. daze seven lizards. Fulfilling all these objectives get you feathers and stuff to unlock other stuff.

Levels are traversed from a level map screen. A lot of times there is only one path through, i.e. you need to pass one level to unlock the next. There are detours to extra reward levels and sometimes multiple paths through to get to the next “area” which is a nice touch.

The main goal of each level is to make it to the far right side and stay alive. Beyond that, it’s all up to you on what more you want to make of it. You can shoot for a faster time or collect all the golden leaves, treasure, coins, etc. If you’re not happy with your performance you can replay the level again easily enough.

Lots Of Shinies To Collect! 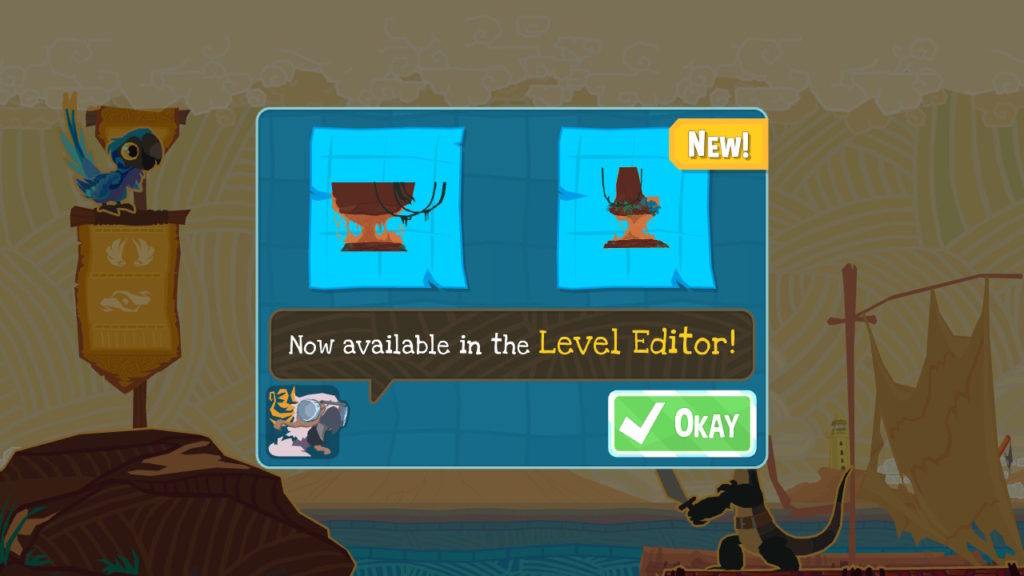 Playing through each level yields all sorts of things to collect. You’ll have to unlock the level creator, e.g., then you can collect level editor pieces. You can collect unlocks for different birds, and colors for the style editor.

While we did not go into depth in the level creator we did get to partake in a small tutorial on its basic usage. You can also optionally upload and share levels.

The character editor was a bit simplistic allowing you to change expressions and region colors on your birds. Sort of like a paint dropper mechanic. 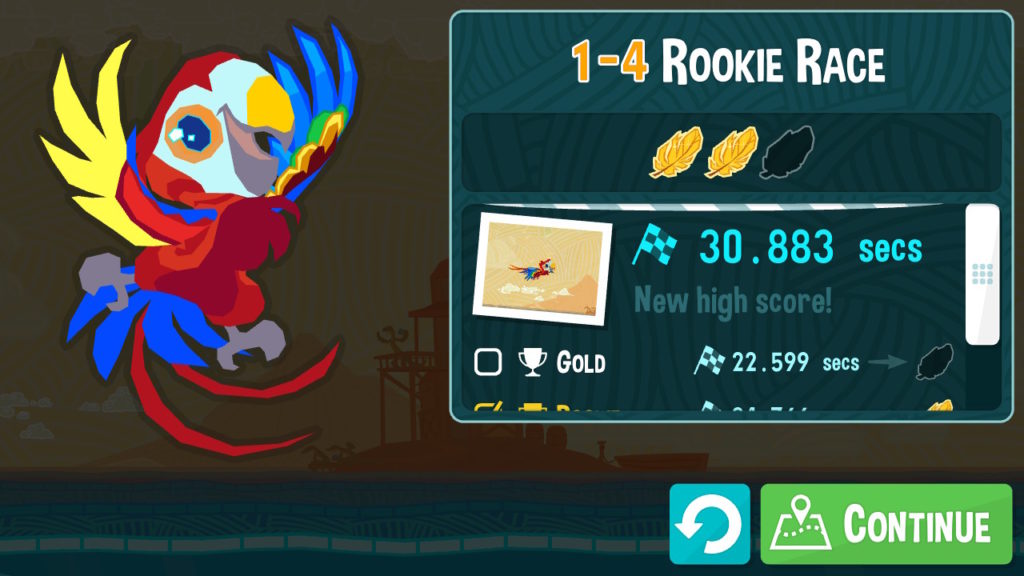 This fledgling reviewer won’t be winning any speed races soon.

Nevertheless, Fledgling Heroes performed really well on the Nintendo Switch in handheld and docked modes. In the undocked mode, there was never any visual issues and it really makes a great travel game, especially for short trip durations. Given that and the overall light-hearted theme, it makes a great game for younger games as well.

The full game encompasses a little over 90 levels, that’s assuming you unlock all the nodes on the map. A lot of the levels you can get through fairly quickly if you don’t mind a perfect score. Even then we were impressed by all the extras included like co-op and competitive gaming with friends and level creation and sharing. And as sure as Polly wants a cracker, there really is a lot to enjoy here!

Tags: Fledgling Heroes, Subtle Boom, super mario
Summary
Fledgeling Heroes might be a bit short in the tooth, game lengthwise, there's no doubting the fun. The game allows you to move forward without being perfect. Time spent on each level is based on the challenge to you weighted by how much you want to collect. Unexpected features like a level creator, cosmetics and styles for your birds, time trials, and score-keeping add to the overall enjoyment to a family-friendly game, and that's nothing to crow about!
Good
Bad
8
Great

Written by
Scott Jeslis
Scott is a comic book, music and gaming nerd since the late 70s. Gaming all began on the Colecovision and Atari 2600. He buys and reads new comics every Wednesday from his LCBS and helps run an online Heavy Metal radio station.
Previous ArticleGet Overcooked For Free on Epic Games StoreNext ArticleThe Last of Us Part II – Inside the World & Extended Commercial Trailer 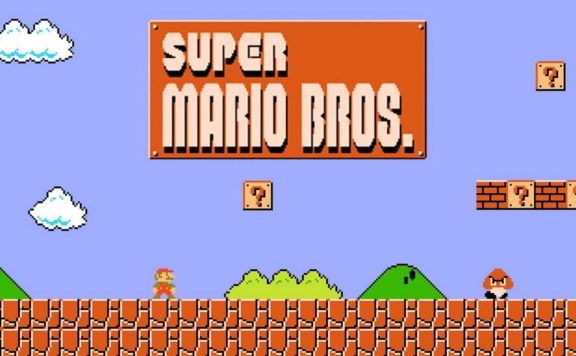 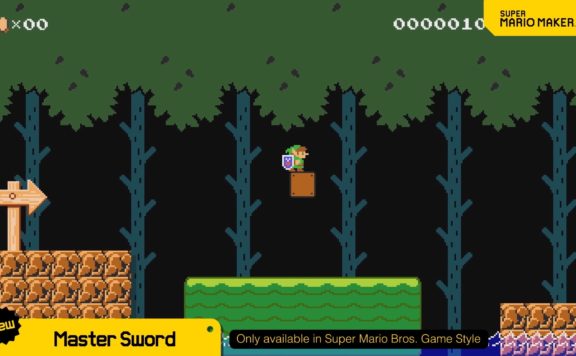