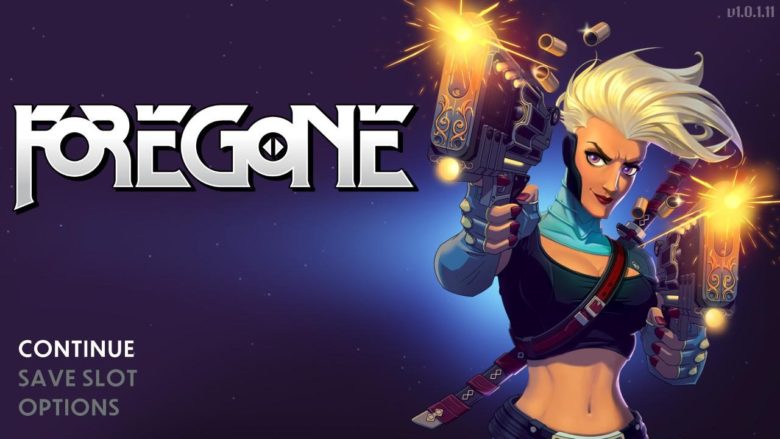 It is an incredible time to be a fan of the Metroidvania genre. With so many titles having been released over the last couple of years, it can be a bit daunting to know where to start. Every developer works hard to leave its mark on the genre. In the case of Foregone, from developer Big Blue Bubble, we find a solid mechanical experience, challenging combat and platforming, and interesting boss encounters. Is this enough, though, to set it apart from the rest? Grab that coffee, kick back, and find out in our review of Foregone provided for us from the good folks at BBB.

Set in a world overrun by the mysterious force known as the Harrow, humanity is all but gone. Hold up in one of the last cities and besieged on all sides, you set out to discover the origins of the Harrow in the hopes of stopping it from overrunning your home. Against this story backdrop, players begin a journey of discovery, combat, and all of the loot you could possibly ever need in an interesting and fascinating world.

Each level feels unique, colorful, and interesting to explore. The level design was one of my favorite parts of the playthrough. As each map unraveled I noted that Everything feels fluid and fast; from layout to puzzle solving. Each level is designed to make you feel like you are progressing forward. In fact, between platforming, power sliding, and dodging there’s never a dull moment in a level.

This theme of fluid and fast is seen throughout most of the mechanics in the game. Combat is a quick, continuous affair. Big Blue Bubble tries to balance the scales between this fluid combat and game difficulty. For the most part, it works. Enemies can’t one-shot you but if you’re not moving and managing them well they can quickly overwhelm you.

In the same vein, boss fights offer some great challenge for both new and veterans of the genre but not so much that you’ll be pitching your Switch across the room. Foregone walks a fine line with combat and they do it well. 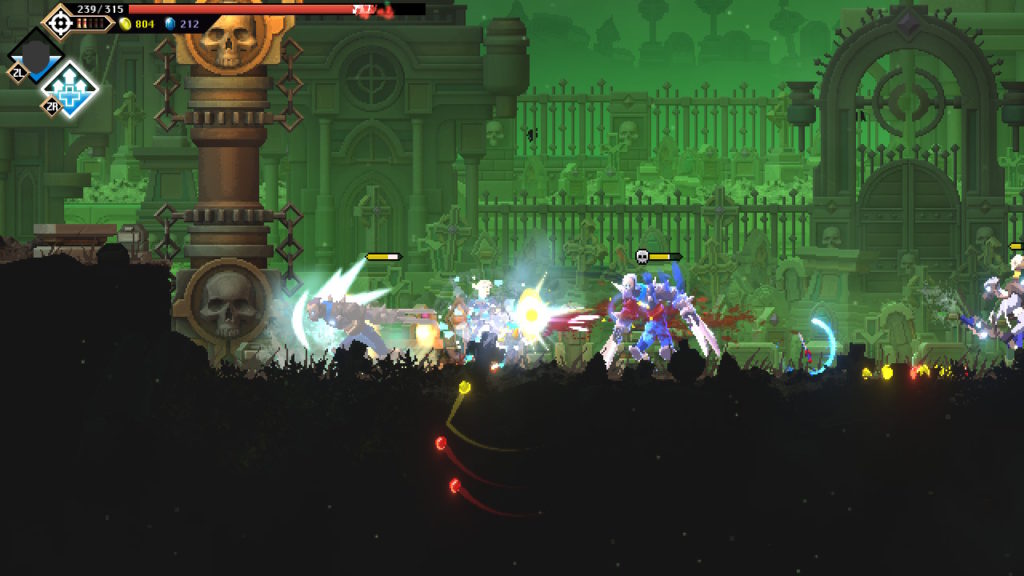 Combat is supplemented by a fairly straightforward but effective progression system. Players are introduced to three basic systems of progression fairly early into the campaign. The first of these is the skill tree which allows you to invest collected shards into three unique skill trees. Each has two paths of development with the game forcing you to commit to one of each. It allows for some unique build opportunities and is forgiving enough to allow you to respec shards that have been spent.

The skill tree feels pretty standard, to be honest. Each branch offers the types of upgrades you’d expect to find. At first, I was a little disappointed to not see anything really new or fresh with the system. However, as I played through Foregone I did find a noticeable gameplay difference when speccing into specific skills. Each point spent did feel like it had an impact on my progression. So although it didn’t really offer anything fresh, the skill tree did feel impactful to the overall progression of my character.

The second progression system comes in the form of special skills that can be collected, leveled, and mastered. You can slot up to two unique skills at a time. They can be swapped out either at the game hub or at hot-swap stations littered throughout each level. The abilities themselves range from survival to damage focused skills all offering some unique way to keep you alive or kill the enemy faster. With the option to swap them out, I was able to come up with combos that worked well for specific situations. Much like the skill tree, I was able to tweak my build to fit the situation. 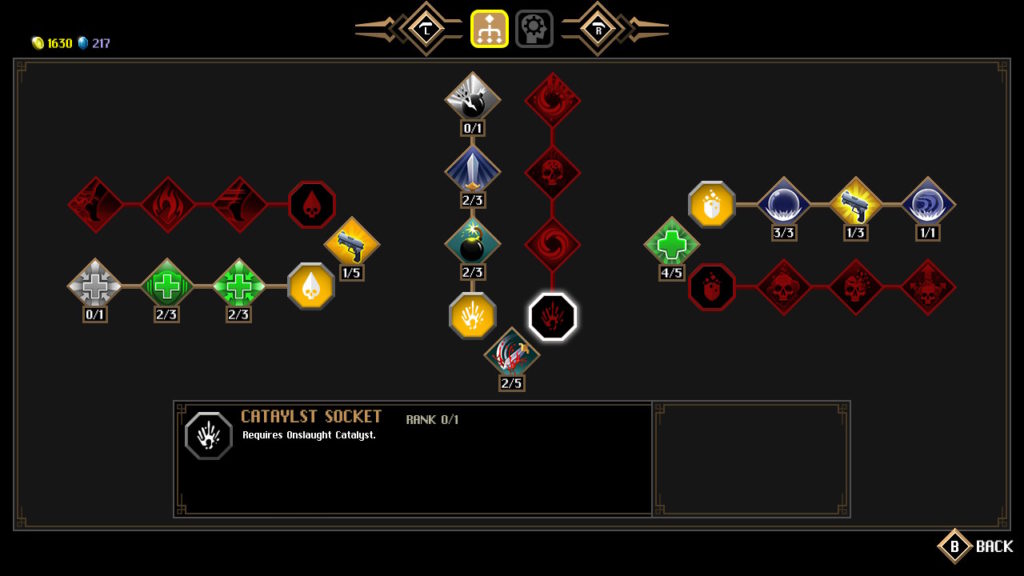 The final progression system comes in the form of shiny, shiny loot. Foregone offers the player a number of slots that can be filled with the aforementioned shiny loot. Weapons, armor, and trinkets all work to boost your player’s power with each piece offering unique modifiers and buffs. Gear is tiered so finding those purple and orange pieces give you that extra hit of dopamine to keep you searching for more. Every piece of gear can also be upgraded allowing you to push things, like your favorite sword, just a bit further before having to replace it. All loot can also be scraped for cash quickly keeping you in the action not managing your bag space.

What I appreciated about all of the above systems most was that it was very much in line with that theme of fluid and fast that I mentioned earlier. Leveling up skills or gear is a quick click of a button and its impact is felt immediately. In fact, this is what I appreciate most about Foregone. Nothing in the game feels like a new innovative concept or mechanic but everything in Foregone works to keep you engaged and progressing. Big Blue Bubble works hard to make sure you spend as much of your time platforming, hacking, and slashing as possible. For the most part, it works.

However, even as refined as Foregone is, as I progressed through the world, the levels did begin to feel repetitive. It wasn’t a game-breaker but felt like a cost that comes from not presenting anything new to the genre. If you’re a fan of the genre it’s a great game in the vein of other Metroidvania games but doesn’t fire it up expecting something overly innovative. 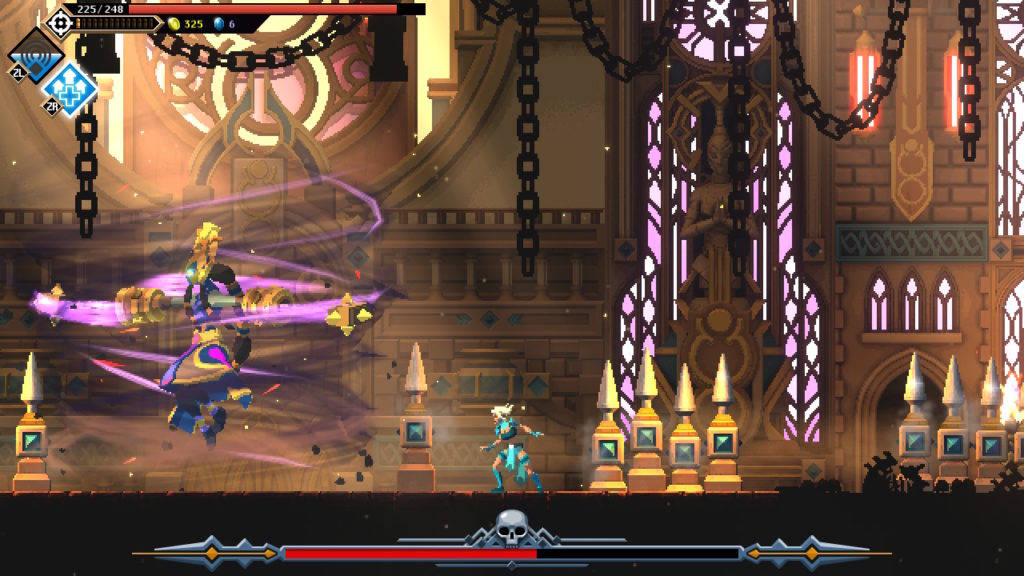 Tags: Big Blue Bubble, Foregone, Metoidvania, pc, review
Summary
Foregone is a solid offering. Combat, progression, and platforming are all fast, fluid, and engaging. What it lacks in fresh, original concepts and mechanics it makes up for a refined Metroidvania experience. If you are looking for a fun, engaging platformer with a good story and some refined mechanics, Foregone delivers.
Good
Bad
7.5
Good