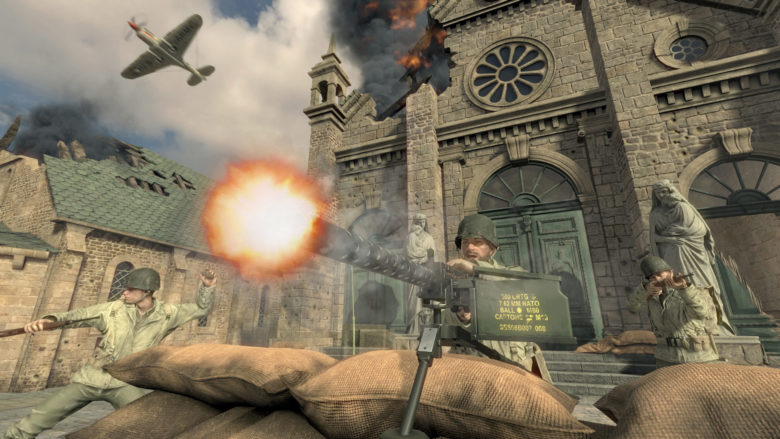 Before stepping into the world of VR, I thought I’d had some intense video game experiences. Somewhere between scrambling across the floor to grab a fresh clip for my rifle, hopping behind the mounted LMG, and grasping for the helmet that had been shot right off my head, I realized how wrong I was. Front Defense is easily the most intense video game I’ve ever played and I have the sore knees to prove it.

What makes the game so much fun despite being simple in its design is the sheer physicality of it. The game features three levels and in each, you’re camped out behind a barricade as waves of enemies try to break your defense. The game makes full use of the Vive’s room scale capabilities and you’ll literally be crawling behind cover to avoid the bullets whizzing overhead. 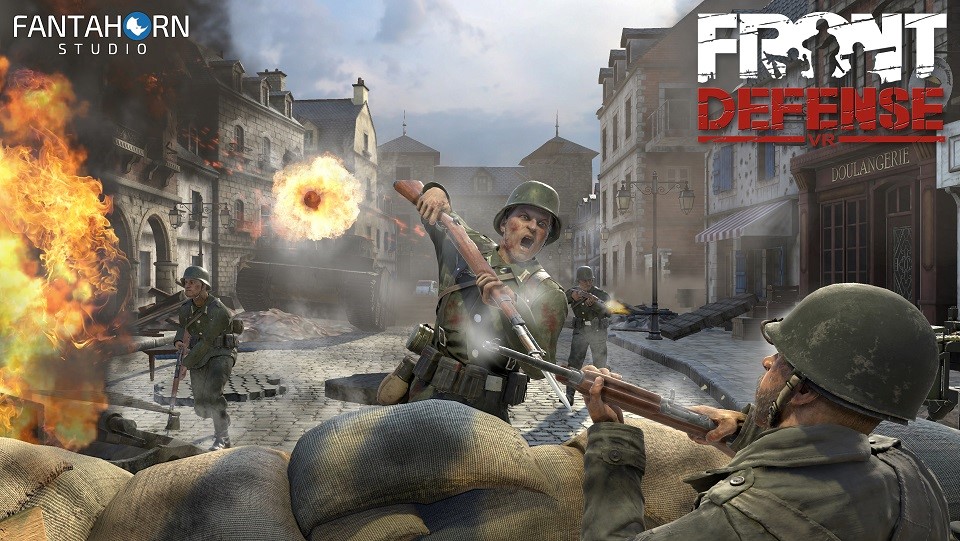 The touch controllers absolutely shine, too. Squeezing the grip to pick up or drop weapons feels  natural, as does reaching up to pull and load clips and ballistics. Aiming down sights is a little more difficult and some weapons’ sights, like the mounted LMG, actually seem to obstruct the view. That was frustrating, but actually letting loose with it is incredibly fun. Fantahorn has done some great work giving every weapon feedback, not only in audio cues, but also in the haptics delivered by the controllers and damage wrought on the world. They’re small touches, but those little bursts of dust and blood, and the way glass explodes for windshields make getting behind the big guns a lot of fun, even if they’re not the easiest to aim.

All of this has to be couched in one important fact: As far as VR goes, I’m a relative newcomer. I haven’t played every wave shooter on the platform or even most shooters. Front Defense is one of my first VR games, but in a way, I’m the exact audience Fantahorn was aiming toward. It’s not deep and it’s not complicated. Instead, it’s a natural evolution of the first-person shooter gameplay we’ve become so used to on consoles. Making the jump to VR just feels natural; being able to pull and load clips, throw grenades with real world force, drop one weapon and immediately pick up another – these are we’ve done for years through the filter of a controller. Actually acting them out is one of the ah-ha moments that sold me on just how cool this new technology is.

Front Defense is a fun game, but it’s not deep and probably could have used some extra time in the oven. Right away it’s clear that the game is somewhat content starved. Even though every level is a kind of score attack with a fight up the leaderboards, launching with only three levels feels a little limited. 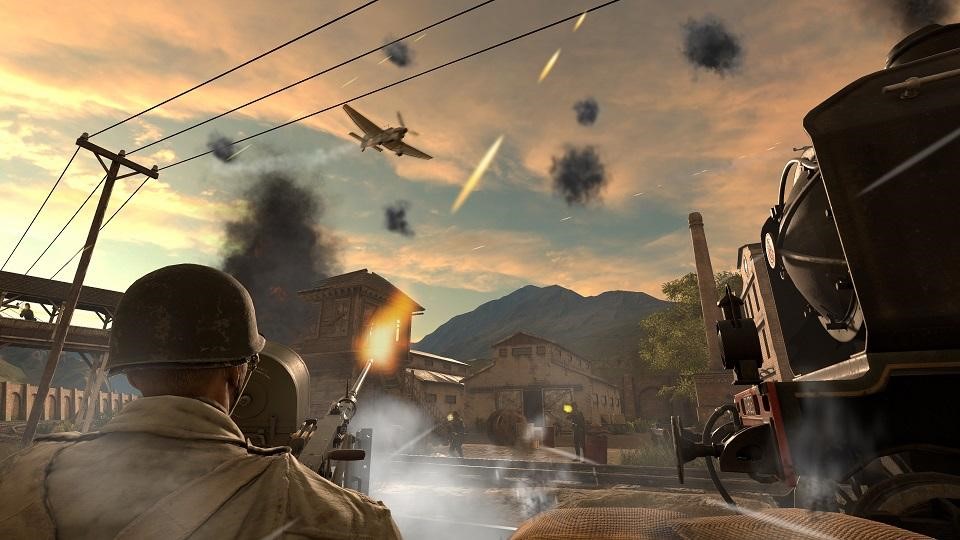 Which really sums up Front Defense’s shortcomings. What’s there is fun, but it’s all limited in some way. The levels are the first example, but right after the simple AI driving enemies steps into the spotlight. Oncoming soldiers have no issues running slowly into the line of fire or standing up beside perfectly good cover waiting to be shot. Their aim is Storm Trooper level terrible, but as waves increase in numbers this becomes less and less apparent. Weapons too are limited too, with a basic machine gun, pistol, LMG, bazooka, and grenades remaining static throughout. There is some variety, like being able to call in airstrikes later on, but weapon progression is sorely absent when it could have added so much to the game.

Front Defense is a simple but fun shooter. Despite its shortcomings, it’s turned into the game that I keep coming back to. In fact, in the case of enemy AI, I think I’ve had a better time because of its limits. I appreciated how it dialed up its challenge through waves instead of making each enemy more of a thorn in my side. Much more from each would simply be overwhelming in a game that is already intense. The whole experience feels tailored made for VR newcomers. The natural physicality of its gameplay is easy to lose yourself in. There’s no steep learning curve; you do exactly what you would think should, and as you get better, the real world slips away before the firefight. Front Defense sells VR to players who’ve spent years married to a keyboard, mouse, and controller, and that’s an accomplishment.

Written by
Christopher Coke
Chris cut his teeth on games with the original NES. Since then, games and technology have become a passion. He currently acts as the Hardware Editor for MMORPG.com and GameSpace.com.
Previous ArticleOur Early Access Review of Iron TidesNext ArticleHalo Wars 2 Rolls Out Serina & Operation Spearbreaker Today 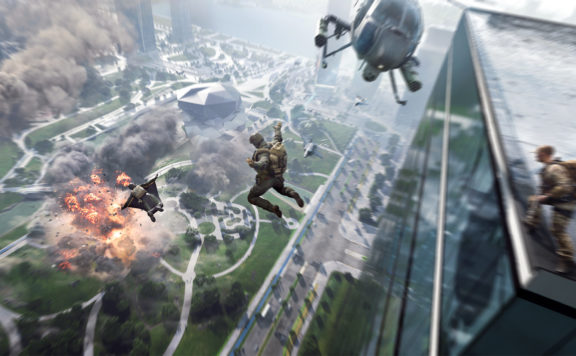 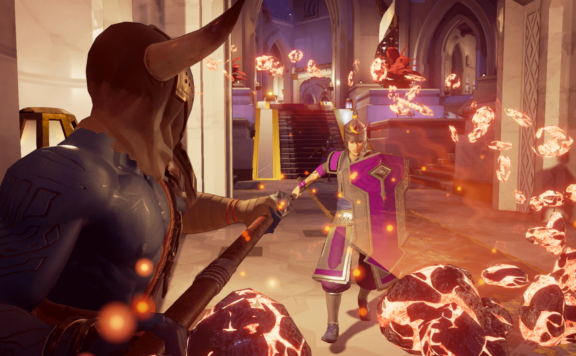 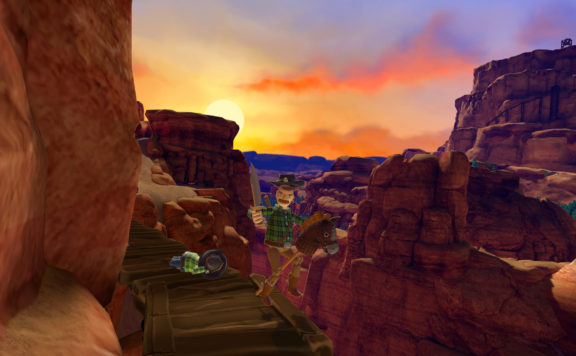 Hopalong The Badlands Invites You to a VR Wild West, Pardner
December 7, 2017