After seven years in development, Iconoclasts is flying onto PC, Vita, and PS4 this week! Was this an indie game worth the wait? Should you play it? How much good can a girl do with a spanner? We’re going to talk about all of that and more in our Iconoclasts review for the PC.

But before we dig into the game, a history lesson. Why?

These words were drilled into my head by a professor I had in college. She was passionate about her students having a commitment to the accurate understanding of the subject. During this same semester, I was also studying church history… Let’s just say I was glad for Prof. K’s reminder because the phrase “Mistakes were made” doesn’t begin to cover it.

I tell you all of this, intrepid reader because it was during this season of my studies that I learned about a group of people called iconoclasts. They were well-meaning folks who saw a huge problem: artifacts and artwork that were venerated – elevated to a place of sacred importance. In short, instead of pointing people toward their subject of worship, the objects themselves were worshipped as a god itself. The iconoclasts decided to solve this problem by destroying these icons. As a result, there is art that we will never have the privilege of being inspired by.

I will tell you why this is relevant later. On to the game!

In Iconoclasts, you play as Robin, a 17-year old girl who has recently lost her mechanic father. To cope with her loss, she has taken up his wrench and seeks to honor his memory with the skills he has passed down to her. There is just one major hitch in the giddy-up: in Robin’s world, you don’t choose to be a mechanic, your profession is assigned to you by Mother, a venerated member of the Godhead, Tri.

Robin is not phased by this oversight because there are people to help and it seems like mechanics are in short supply. So is this world’s power source, Ivory. This charade goes on for a while, but the town’s folk are scared that her unauthorized tinkering with Ivory (which is seen as a holy blessing) will draw the wrath of the vengeful Father, a giant holy space worm (yup – you read that right), and that he will send His Penance upon them for their sins. It isn’t long before Robin is caught helping her brother, sister-in-law, and niece when the arbiters of Mother’s will, agents of the One Concern show up and make them pay for Robin’s deeds. It is from here that Robin is thrown into a world that doesn’t want her with a skillset she’s not allowed to use with the loneliness and grief of lost family to deal with. Along the way, she meets a crew of misfits who discover that, sometimes, a wrench in the system can solve a problem or two.

Iconoclasts is a Metroidvania-style game with a little bit of Bionic Commando thrown in for good measure. It is a brightly colored, 2D side-scroller with plenty of action, puzzles, and boss fights to keep you in the fight. Let’s talk about game mechanics. I reviewed Iconoclasts on Steam and it does have controller support. While you can’t edit the control layout, this is still a great thing because I have tried playing side-scrollers with a keyboard before. I am miserable at it!

To traverse the world, Robin has use of her wrench – which is handy for opening doors, turning gears, and swinging off of things. She also has a stun gun with an overcharge feature. Be careful how you use it, the stun gun can overheat with overuse! Both of these items are helpful in dispatching enemies that you face around Iconoclasts’ world.

There are moments throughout the game that you control other characters who have different skills sets – like shotguns or swords. While I couldn’t find controller support for actively switching between party members, there was time during testing that I tried to play with the keyboard and was able to switch between Robin and Mina – a pirate of sorts.

Iconoclasts has a Tweak mechanic which allows you to craft ability enhancements from patterns you find scattered throughout the world. These patterns can increase your run speed, extend your wrench’s shock charge (an ability that you get later in the game), your ability to breathe in gaseous areas or underwater, take extra damage, and much more. Tweaking adds a level of customization to the game to match your play style. Tweaks, however, can be shut down when you take damage – starting with the right-most slotted Tweak.

From a longevity perspective, Iconoclasts is a satisfyingly long game, but not so long that it starts getting old. While there are some moments that you backtrack (like any good Metroidvania game does), there was never an area that I felt kept me there too long. The twenty boss battles are all challenging, but with satisfying gameplay mechanics to them. Each fight was unique and left you wondering what it would take to overcome the present challenge! This is one place that Iconoclasts does face a little bit of trouble.

Because of the sheer volume of boss battles, there is a limit to how unique you can make each fight without them being cookie-cutter predictable. There was one fight that I felt like I needed a fair bit more time getting familiar with Mina’s controls for the fight to be better balanced. But, this is like the world of Iconoclasts: unforgiving.

This is where we come back to the history lesson. Iconoclasts is faithful to the meaning of the word. It establishes a world that is rigidly religious and then dismantles it. Whether it’s the fertility cult of Mina’s people or the sacred will of the Tri, each one seems to dismantle the other through their interchangeability. Some of the most interesting pieces of dialogue happen between Mina and Royal surrounding their different faiths. For me, it was interesting to see what their dogmatic indignation made them do and it informed their worldview.

Yet, Iconoclasts seems to take the dogmatism a step further. It surmises that at their core, all religions are equal and equally invalid when the proverbial wheels start falling off. While I have a different perspective on this proposition, it is far better to wrestle with and talk about ideas than it is to destroy them like the iconoclasts of old. Art imitates reality and these are important conversations to consider along with how we arrive at those conclusions. I hope that games like this spark them.

At its heart, Iconoclasts is a story about misfits and loss. Robin is an orphaned mechanic in a world where she’s not allowed to pursue her craft, Mina has an ailing mother and is implied to be a lesbian in a culture that worships reproduction and fertility, Royal is heir-apparent to Mother who rejects him, and Robin’s brother, Elro, works for a research group within the One Concern – who dismissed his research as heresy and stripped him of his family.

While each character chooses how they deal with these rejections, it is Robin who leads them in the spirit of John Wesley, a misfit in his own time in church history. While she hardly speaks, her actions echo his words: “Do all the good you can, in all the ways you can, to all the souls you can, in every place you can, at all the times you can, with all the zeal you can, as long as ever you can.”

If you like Metroidvania style games with compelling storytelling, satisfyingly challenging boss battles, and music to match the feel of the game, Iconoclasts is worth playing through again and again. It is everything that I love about indie games. I am so glad that solo developer Joakim “Konjak” Sandberg has given us this masterful piece of art to consider. It was definitely worth the wait!

Speaking of waiting… as I don’t a PS Vita, I will have to wait on that fateful day when Iconoclasts will migrate to the Nintendo Switch. It’s always handy to have the right mechanic in your pocket.

Note: Our copy was reviewed on Steam with a code provided by BIFROST Entertainment.

Written by
Damien Gula
Born in the heyday of mullets and the El Camino to a tech-foward family, Damien (a.k.a. Dame, PastorDame) quickly embraced the reality that “normal” is just a setting on a dryer. Damien is a pastor by trade and loves talking with anyone who is interested about life, God, and video games (in no particular order) - so, much so, that he and fellow MMORPG/GameSpace writer Matt Keith (Nexfury) create a podcast dedicated to that conversation. At the end of the day, Damien is a guy who loves his wife, his Mini Schnoodle, and crafting gourmet bowls of Mac N’ Cheese.
Previous ArticleTotal War: Warhammer 2: Rise of the Tomb Kings ReviewNext ArticleThe Witch and the Hundred Knight 2 – Release Date Announced 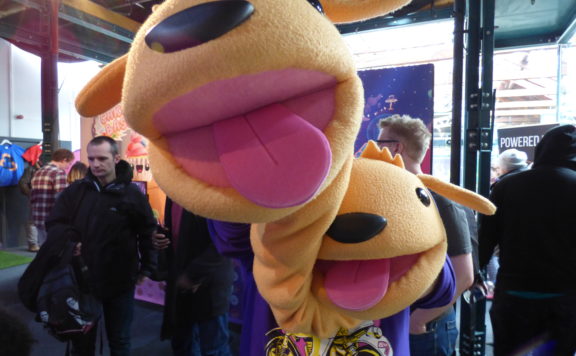