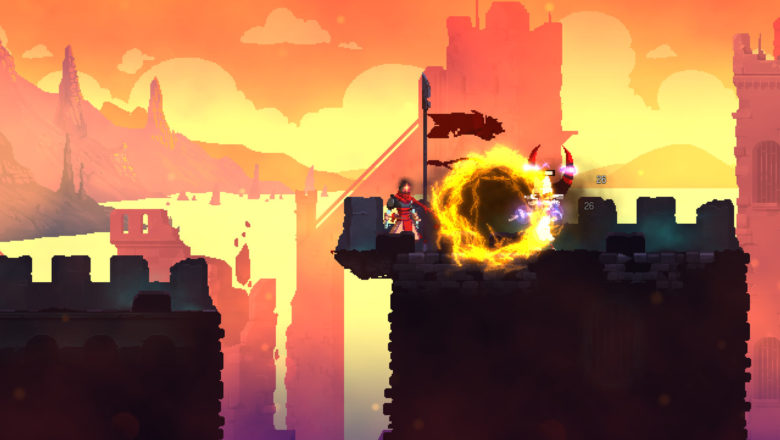 The big news to hit the industry this week is one involving plagiarism. In case you somehow missed it, former IGN writer Filip Miucin was accused of plagiarizing his (now taken down) Dead Cells review from YouTuber Boomstick Gaming. In this piece, I aim to explore the context behind it, and what I consider to be the most important aspect of this whole thing, the implications. First, forgive me while I provide some brief background and context in case you somehow aren’t aware of what exactly happened.

In short, in this video, Boomstick lays out his concerns and points out similarities between his own review and IGN’s review in the description of his video,

Boomstick: In Dead Cells you will need to kill your way through a labyrinth of levels all punctuated by boss encounters that starts off quite linear but the more you play the more routes and game mechanics open up to you. You might not be able to make it to the final boss on your current run but if you can manage to salvage some blueprints for some new gear or better yet, a ability altering rune, it makes it all worth your while….

Filip: In Dead Cells you fight your way through a ever changing labyrinth of levels with branching paths, your almost guaranteed not to make it all the way through on every run, but as your efforts lead you to blueprints that unlocked new gear, it makes it all worth your while….

Boomstick: In most games of this genres your coolest skills and spells are often set to stricky long recharge timers or a limited mana system but in Dead Cells, your abilities have incredibly quick recharges and allow you to seamlessly integrate these gadgets in normal encounters and doesn’t make you feel penalized for using your cool stuff. This combat system is fast, fluid, responsive and one of the most rewarding representation of 2d combat of the entire genre.

Filip: Most games limit your most useful skills with long cool down timers or a limited mana system but Dead Cells encourages you to use your deadliest gadgets with a fast recharge timer. It never punishes you using your best tactics. Fights are fast, fluid, responsive and hands down one of the most gratifying representations of video combat iv ever experienced.

As this whole event unfolded, this led me to two possible scenarios. Either Filip was too lazy to actually play the game and plagiarized the words of a smaller YouTuber hoping no one would notice.

Or, he did actually play the game and plagiarized the words of a smaller YouTuber hoping no one would notice. Of course, we now know that Filip indeed did play Dead Cells and logged at least 45 hours as was confirmed by Dan Stapleton on Reddit here and here.

Even though we know the latter to be true, that Filip did actually play Dead Cells, neither scenario is even remotely acceptable. In my opinion, both reek of incompetence.

In response, IGN took down his review, later posting this Tweet. Last week, this Tweet was pinned to their Twitter page. However today, it is not. This means that someone just looking at his own personal Twitter feed could easily scroll past it, completely missing it. The fact that this Tweet is no longer pinned, not even a week after this controversy as of this writing, is simply unacceptable to me.

Additionally, as of this writing, IGN’s statement is not readily present on their homepage. Meaning, unless you go digging for it, you cannot easily find it. In fact, even in their re-review of Dead Cells, this full statement is not present. 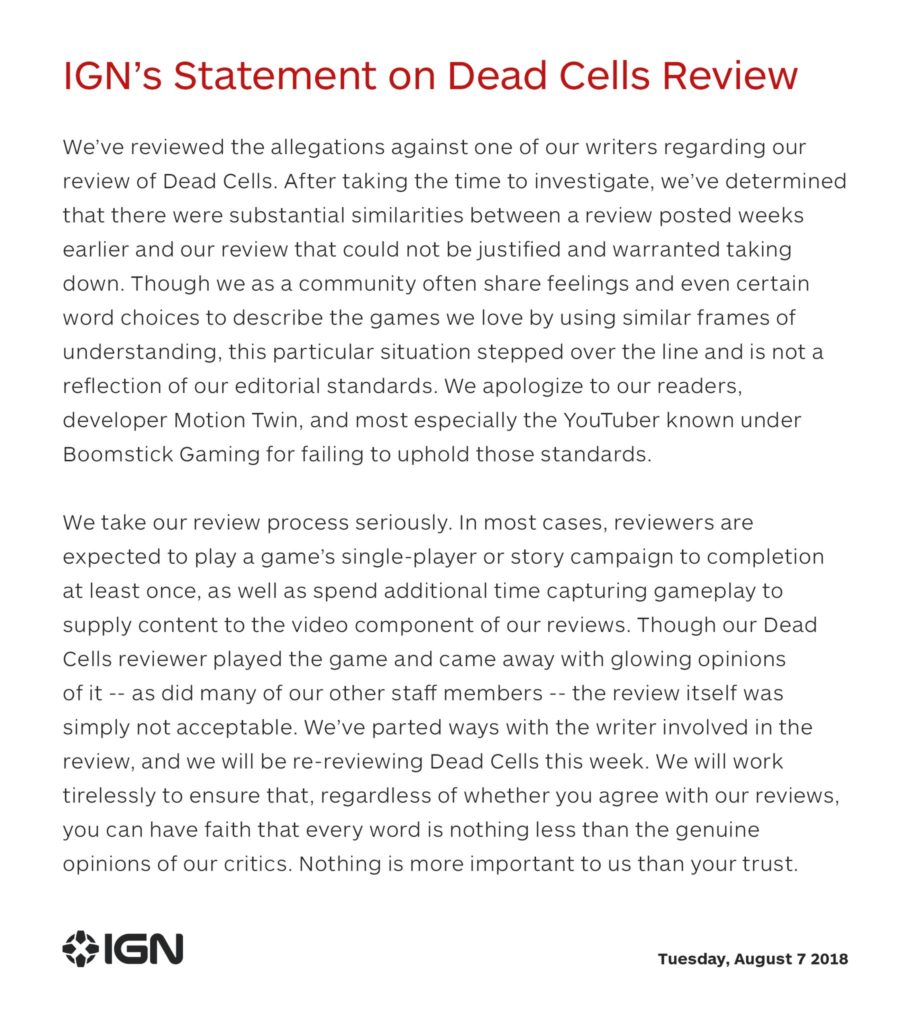 Again, I find this unacceptable. As easily the largest and most influential outlet, they have a responsibility and obligation no one else does. IGN is in a unique position here to genuinely shape and guide discussion in this industry and most importantly, to the consumer. I find it disappointing that they have not taken the opportunity to really set a precedent on how to have a genuine transparent discourse with consumers and the industry at large.

This isn’t to say individual editors and writers at IGN haven’t publicly engaged with their readers on this issue. They absolutely have. But at a larger level, at the policy and process levels, I haven’t seen any larger discussions being had with the public regarding change. Regardless of what your view may be of them, IGN is clothed in great power. Personally, it is frustrating to see them not leverage that power for genuine positive long-term change.

As Bradford and I discussed on our latest episode of our podcast, Gaming The Industry, this situation completely poisons the well for everyone now associated with IGN, through no fault of their own. Now because of Filip, all readers will justifiably question everything written and created by IGN. For example, the legitimacy of Bradford’s upcoming World of Warcraft review will no doubt be called into question through no fault of his own, a concern he laid out in our show. In fact, for proof, look no further than the comments to IGN’s video review of Monster Hunter World for PC. 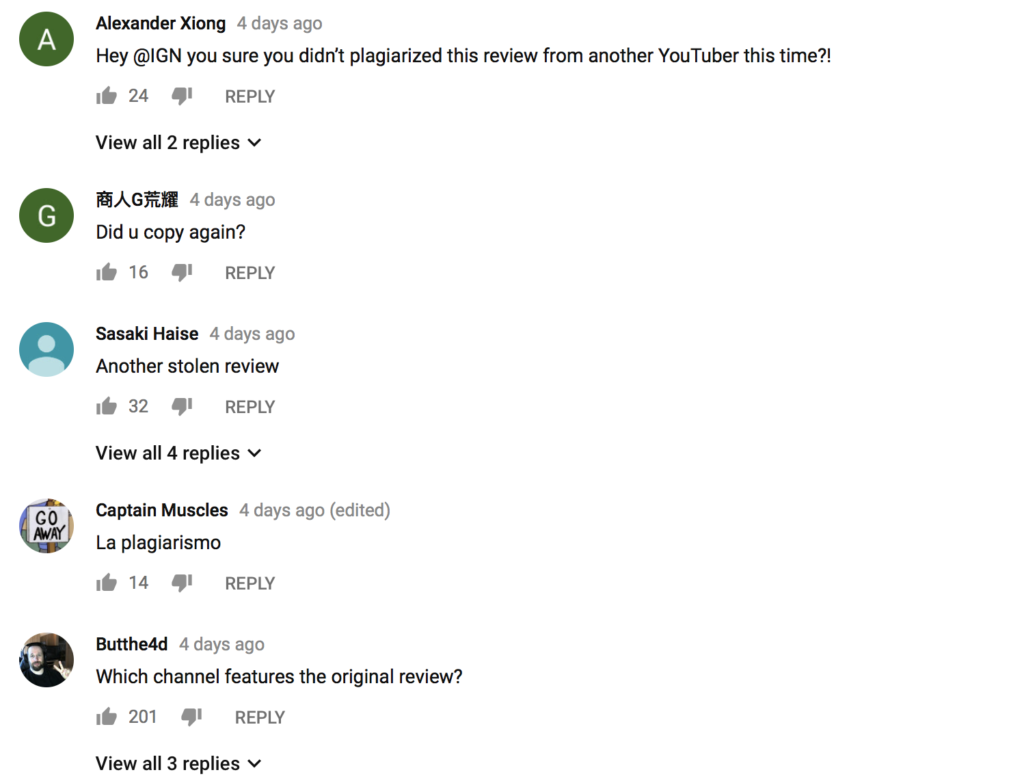 I’m not going to sit here and defend against this consumer skepticism. Pushback from consumers is vital to healthy discourse and competent honest coverage. At the same time, Joe Skrebels’ review is tainted by no fault of his own, giving rise to a different concern that is just as valid. I’m not here to say one perspective is more valid than the other. One must consider the situation holistically. It is only common sense that we do so. I’m simply saying this is now the reality.

What are the implications of this? Personally, I fully expect the industry to simply move on to the “next thing” in a week’s time. The attention span is simply too short and frankly, I simply don’t trust that consumers and media are willing to have an open and honest discussion. By having that discussion, they are recognizing the problem head on. But as is more often the case, it’s much easier to ignore the problem than confront it. This isn’t what I want to happen, but it is what I think will happen.

And this is the reason why I’m writing this editorial, almost a week after this whole situation. Something like this must be kept in the forefront of discussion henceforth, not quietly swept aside. In an effort to keep the conversation going, allow me to humbly offer some solutions.

First, I think the overarching issue in this industry is a lack of competence by way of critical thinking. For my full views on that, check out my thoughts here. This not only dictates how we perceive information, but how we create information. 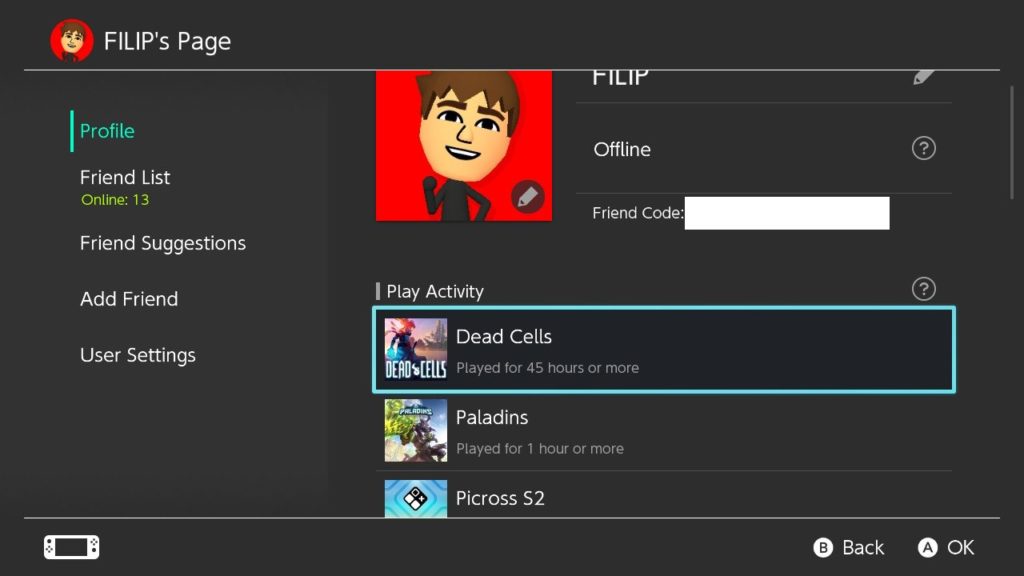 To that end, I fundamentally believe the hiring and vetting process must change. Narrow the scope of the process to really zero-in on extremely specific qualifications. Have more nuanced discussion with the candidates on their thoughts on major issues impacting consumers today, such as microtransactions, game marketing, review processes, etc. This will help the hiring manager to better understand the critical thinking skills and thought processes of these candidates, not just their ability to write or edit a video.

Go one level deeper, and ensure the people doing the hiring are themselves competent individuals capable of teasing out the nuanced thought processes of the prospective candidates. Now, some may say that interview processes are already in-depth. My response would be that if they truly got to the heart of the competence and critical thinking matter, then controversies like this wouldn’t happen.

In other words, a systemic problem requires a systemic solution. All of this connects and ultimately impacts the one party that I am concerned about most: the consumer. The statement from IGN, the re-review, all of these things are short-term fixes. But in order to change, in order to truly contribute to the discourse and positively contribute to the industry, the long-term solution is required. And unfortunately, I simply don’t see that happening.

If you’ve followed me this far into the article, congrats. Here are some internet points. If you’re looking for additional information, I encourage reading Jason Schreier’s investigation on Kotaku. It’s fantastic. I hope that, at the very least, I’ve inspired some critical thought from media and consumers from this whole ordeal. Perhaps, that notion is a bit hubristic of me. Regardless, I do want long-term change. That is why I write what I write. We’re long overdue.

Written by
Poorna Shankar
A highly opinionated avid PC gamer, Poorna blindly panics with his friends in various multiplayer games, much to the detriment of his team. Constantly questioning industry practices and a passion for technological progress drive his love for the video game industry. He pulls no punches and tells it like he sees it. He runs a podcast, Gaming The Industry, with fellow writer, Joseph Bradford, discussing industry practices and their effects on consumers.
Previous ArticleMagic Leap One Arrives for $2295 In Six Specific CitiesNext ArticleRoccat Vulcan 120 AIMO Gaming Keyboard: The Future is Bright with AIMO 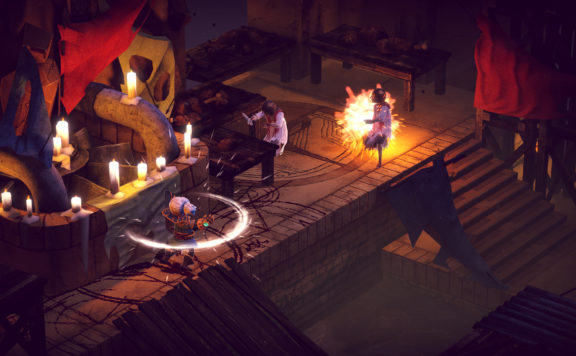 Our Review of Children of Zodiarcs
August 18, 2017