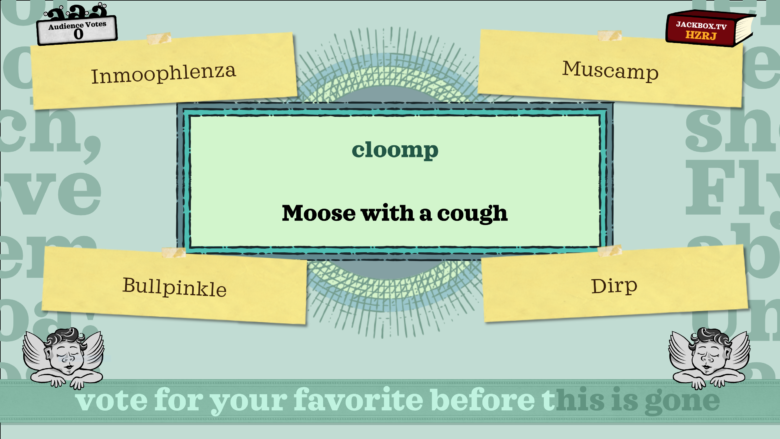 Jackbox games have always had a very specific brand of humor that is just plain weird. I don’t mean that in a bad way; I mean that in the wacky, endearing definition of the word. It is this off-the-way, non-sequitur humor that has kept me following their titles since the 1998 release of You Don’t Know Jack: The Ride. Within this review, we will be diving in the seemingly endless pit of oddities that is Jackbox Party Pack 6.

If you have lived in a shoe for the past three decades, the Jackbox formula has not changed much in that time. It goes a little something like this: take an idea for a fun party game – think trivia game, word puzzler, or some incarnation of charades, make that game do a whole heap of drugs, send that game through a dimensional portal to behind a Chicago Burger King to the magical land of Foon for a few years, and then drag it back to see turned into. The result is a collection of unpredictably erratic, out-in-space, and (occasional) non-sensical games that bring people together for a few laughs. Jackbox Party Pack 6 does exactly that with its collection of five games. 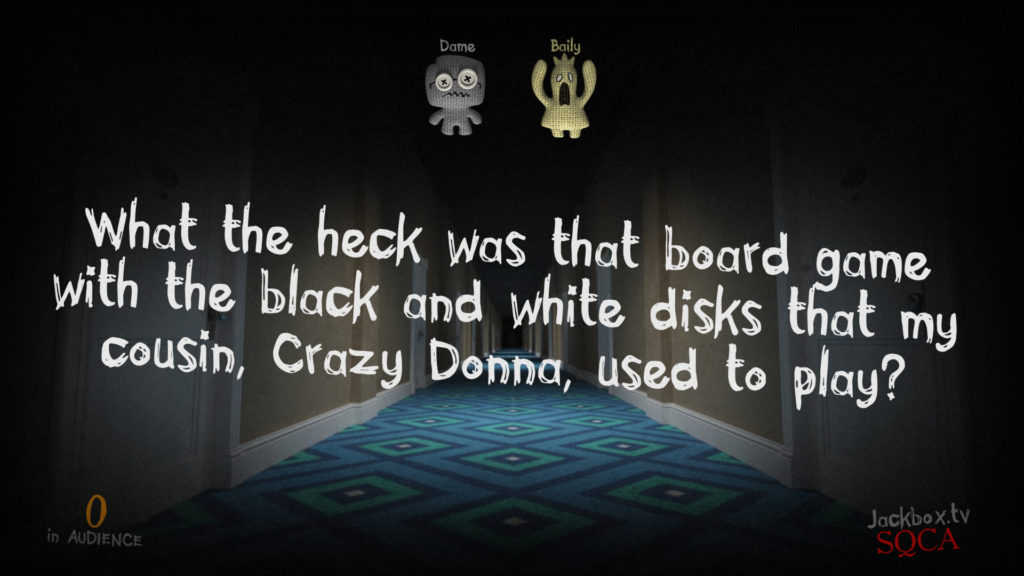 Beginning with Trivia Murder Party 2, players check into a spooky hotel only to be greeted by a mass murderer who likes to play with his food. Players will be asked a series of pop culture-related questions (i.e. “Which of these albums in NOT a Chance The Rapper album?”). Those who answer right are safe, those who do not are sent to the Killing Room. Each Killing Room has a different set of challenges – everything from drawing to dictation to picking a spot to hide in a box. If you answer correctly, you get to leave the Killing Room un-killed. If not, you go back as a ghost.

If you get turned into a ghost, don’t worry: ghosts still get to play during each round! At the end of Trivia Murder Party 2, if at least one player is left alive, that player is given a rapid-fire set of multiple-choice questions to make their way down the final hallway to escape. If a ghost overtakes a live player, they will possess that player, leaving them as the ghost!

Trivia Murder Party 2 can be played with 2 – 8 players. 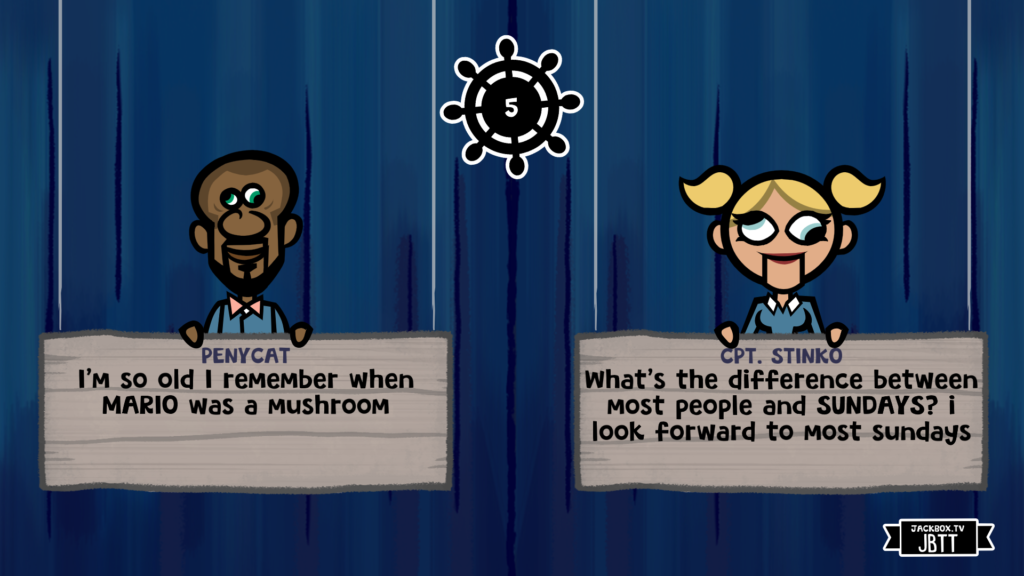 Next up is Joke Boat, a MadLib style of game where you serve as the entertainment aboard the S.S. Sea Minus – a cruise ship already in troubled waters and even more troubled for entertainers. Within each round, players are given the opportunity to choose a catchphrase, a signature word, and create jokes from prompts. Each comic will be pitted in competition with each other with voting to take place after each round. If a comic happens to use another’s signature word, that comic will score points as well! 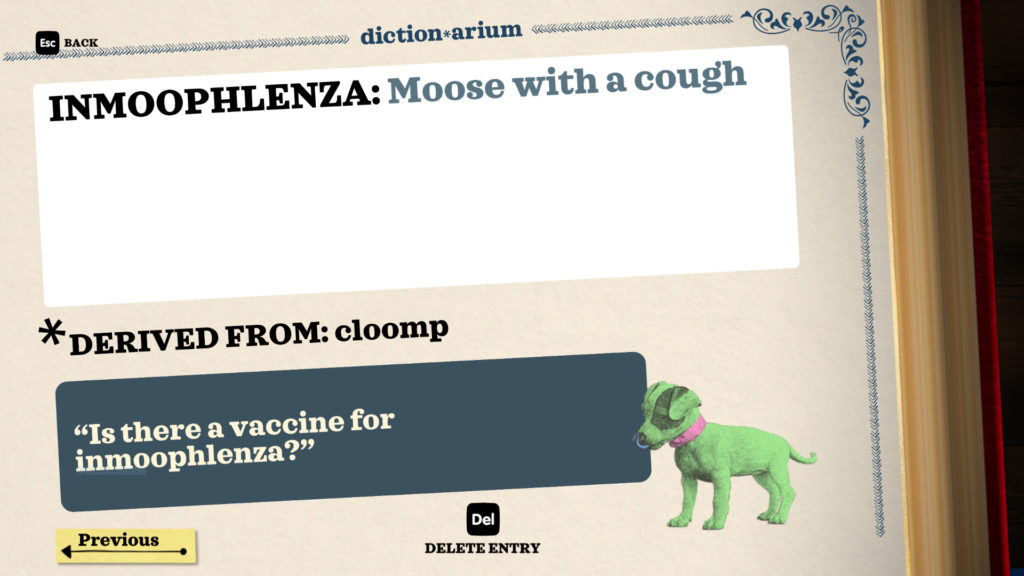 In Dictionarium, players enter a self-described “popularity contest for words.” This word game is well suited for a creative crowd that enjoys fictionary games like Balderdash.

In the first round, you are given a made-up word in which you will create a definition. Players will vote on which definition is the most fitting and then be tasked with creating a synonym in the second round. In the final round, players will use that word in a sentence. Once a round is completed, that word will be forever stored within the grand and glorious tomes of the Dictionarium. Oh yeah, and this game has a fantastic song at the end of it. Stick around through the credits!

Dictionarium can be played with 3 – 8 players. 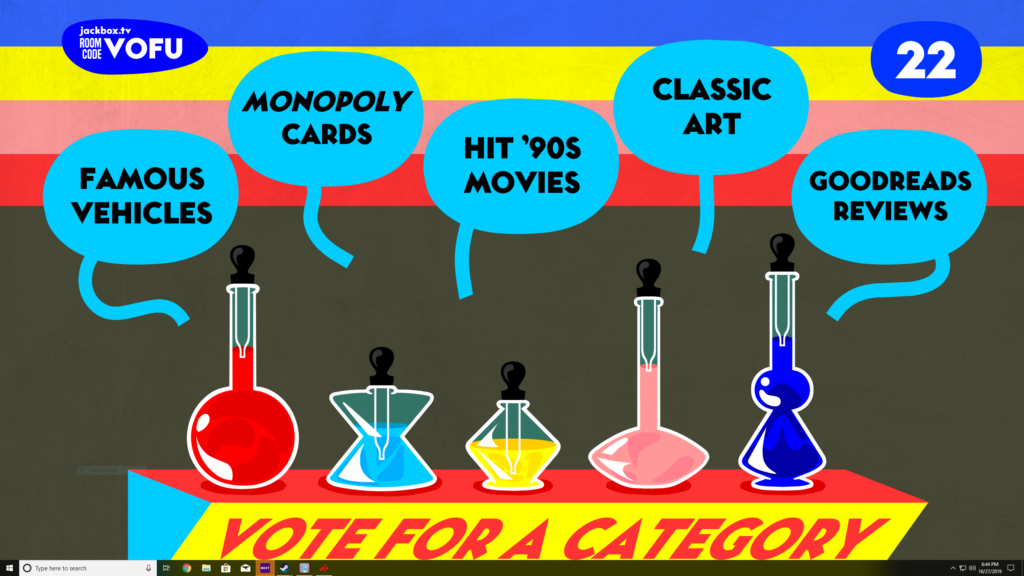 Role Models is a crowd-sourced personal test. Players choose a themed category and a series of descriptions within that category to associate with each person involved. For example, in the Classic Monsters category, each player is must be tagged in which monster (The Mummy, Dracula, Frankenstein’s monster, Werewolf) they most directly correlate with.

After a series of these questions and some individual bonus questions, a character description is given. You can even get your description printed onto a t-shirt if you so choose.

Role Models can be played with 3 – 6 players. 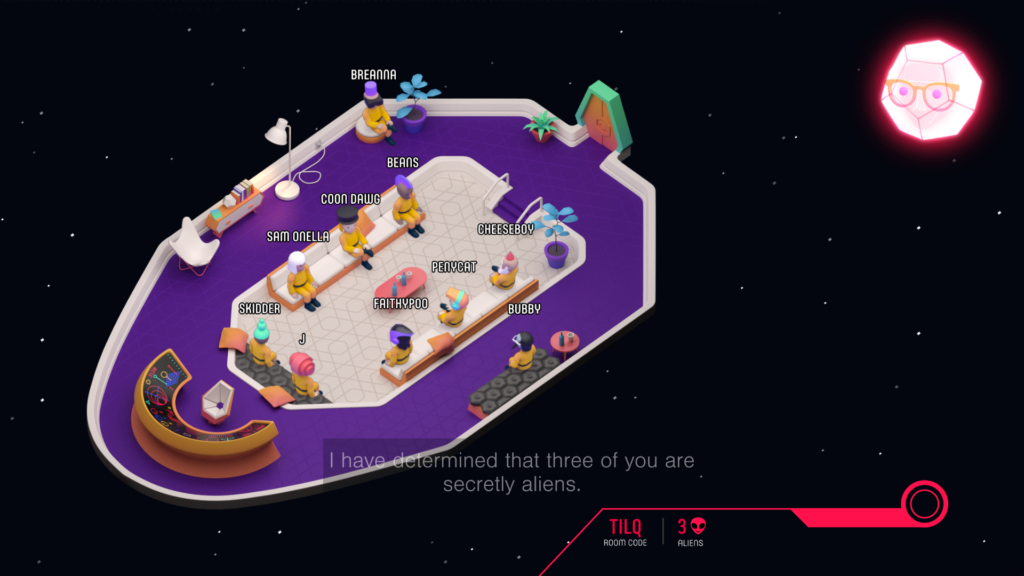 Finally, there is Push The Button – a game of suspicion and subterfuge. The game is set up like this: you are aboard a spaceship that has been infiltrated by aliens. These aren’t your friendly aliens, they have uploaded a virus that is slow deleting the ship’s onboard AI.

Throughout Push The Button, each person is given the opportunity to serve as the captain for a round. During the captain’s round, they will choose and exercise and the players to participate with an activity to determine whether the players involved are humans or aliens. At each prompt, the humans will be given a correct cue of what is expected from them, i.e. draw a bear. However, aliens will get a completely different prompt and have to defend their answers to whatever task is assigned within that round. In the end, each player will vote on who (if any) they think the alien or aliens within that test are.

You must identify within a specified amount of time who these aliens are, place them in an airlock, and vote to send them out of the previously mentioned airlock. At any time, a player can choose to do as the title suggests and push the button. Once the button is pushed, that player will select the people under suspicion of being an alien entity. The vote must be unanimous to accuse these players, otherwise, the attempt fails.

If an attempt fails, that player loses their ability to push the button for the rest of the game. The game is concluded when the timer runs our, when the aliens are rounded up and jettisoned, or if someone inadvertently sends poor Arnie from engineering out the shoot.

Push The Button can be played with 4 – 10 players.

Alright, that was a lot of information. So, how does all of this work?

Jackbox Party Pack 6 functions on a principle that we were all reminded of in 2018: that everyone has cell phones. By using your personal device, you can log onto jackbox.tv, enter a player name and a lobby code for the game. Players will use their devices to interact with the game, removing the need for specialized remotes or equipment, broadening the entry point for play.

This accessibility is what makes Jackbox games so great for entertaining within your home or on stream! Say that you have guests over and you want to pop into a low commitment game – something to keep the room lively. Games like Dictionarium and Role Models could be the ticket. Say that a streamer wants to host a community night, a night where they join in a round of games with their viewers? Push the Button can get the chat involved in crowdsourcing who those aliens might be! Maybe you just want to get competitive with people… that’s where Trivia Murder Party 2 and JokeBoat come into play. 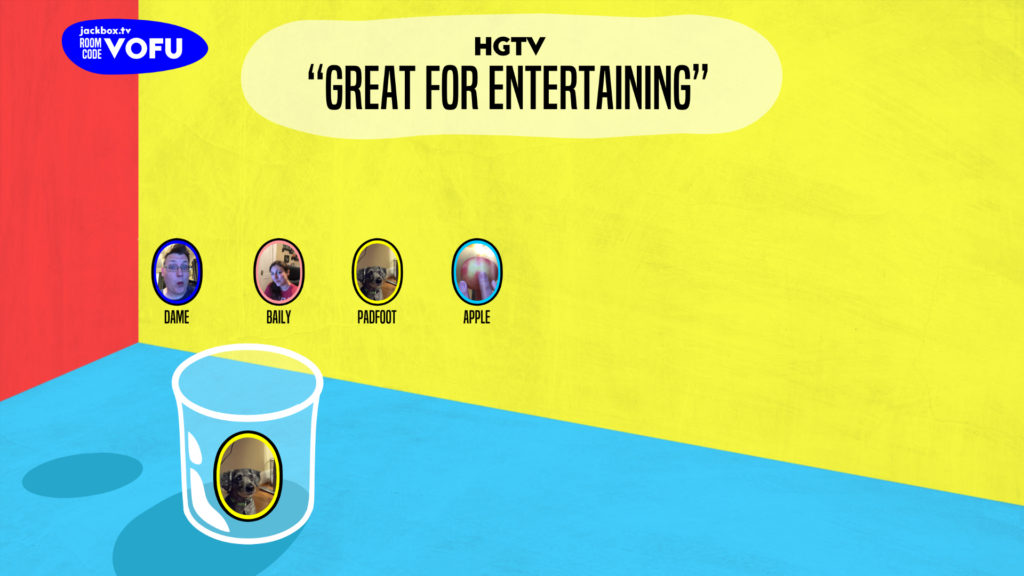 We had a few hitches with Jackbox Party Pack 6. We had some issues with a device where someone accidentally closed out of their browser during play and could not get back into the game. If someone got disconnected or was inactive, there was no way that we found to be able to remove them from the game. We did also have issues when testing out the Mac client via Steam that Role Models and Dictionarium would crash as we started to get a game set up.

With the barriers of specialized equipment removed and the option to keep things family-friendly (with the exception of Trivia Murder Party 2 – hard to take the “murder” out of Murder Party), Jackbox Party Pack 6 is weird, wacky, and wonderful fun with the right crowd. If you are looking for a set of party games that can be played in the living room or the chat room, it’s definitely worth checking out.

Jackbox Party Pack 6 is $29.99 on all platforms. For our review, we tested it out on Steam with a code provided by PR.

Tags: Dictionarium, Jackbox Games, Joke Boat, party games, Push The Button, Role Models, Trivia Murder Party, You Don't Know Jack
Summary
Jackbox games have always had a very specific brand of humor that is just plain weird. I don’t mean that in a bad way; I mean that in the wacky, endearing definition of the word. While it is this off-the-way, non-sequitur humor that drives it, but the accessibility of Jackbox Party Pack 6 has something for everyone across a broad audience.
Good
Bad
8
Great

Written by
Damien Gula
Born in the heyday of mullets and the El Camino to a tech-foward family, Damien (a.k.a. Dame, PastorDame) quickly embraced the reality that “normal” is just a setting on a dryer. Damien is a pastor by trade and loves talking with anyone who is interested about life, God, and video games (in no particular order) - so, much so, that he and fellow MMORPG/GameSpace writer Matt Keith (Nexfury) create a podcast dedicated to that conversation. At the end of the day, Damien is a guy who loves his wife, his Mini Schnoodle, and crafting gourmet bowls of Mac N’ Cheese.
Previous ArticleConstruction Simulator 2 US Builds Up To Nintendo Switch ReleaseNext ArticleStar Wars Jedi: Fallen Order – Launch Trailer