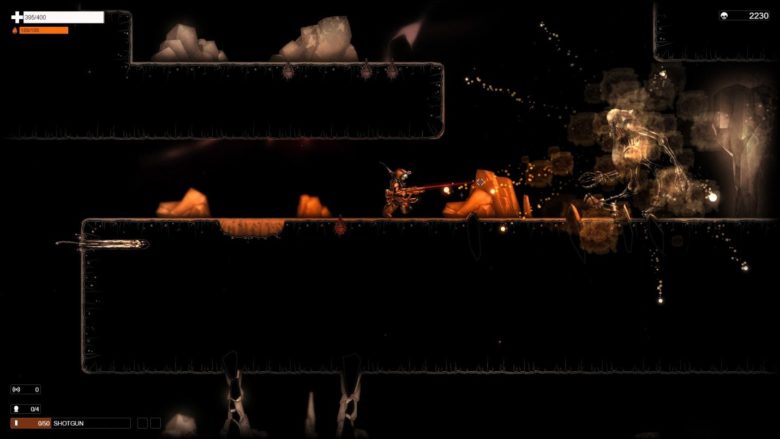 Orange Moon is a unique indie title, developed by Betelgeuse Zero and published by Meridian4, that presents as a Metroid-esque 2D action platformer with a variety of puzzles to open the path forward and a story that draws you from level to level as, even on a solitary moon, organizations struggle for power. While the graphics and animating employ a mostly monochromatic variance of orange, the implementation is expertly done and matched with a well-executed story and depth of environment the result is a strong instrument of immersive space and moon blazing adventure. This is our review of Orange Moon.

The story has the player landing on the orange moon to do some deep space mining, armed with a machine gun and flamethrower, to scout out harvestable veins that the player will mark with a beacon. The alien environment truly gives the impression of being alone in space and the alien life encountered is… well, alien; strange and dangerous to boot, even the plant life is out to get you! 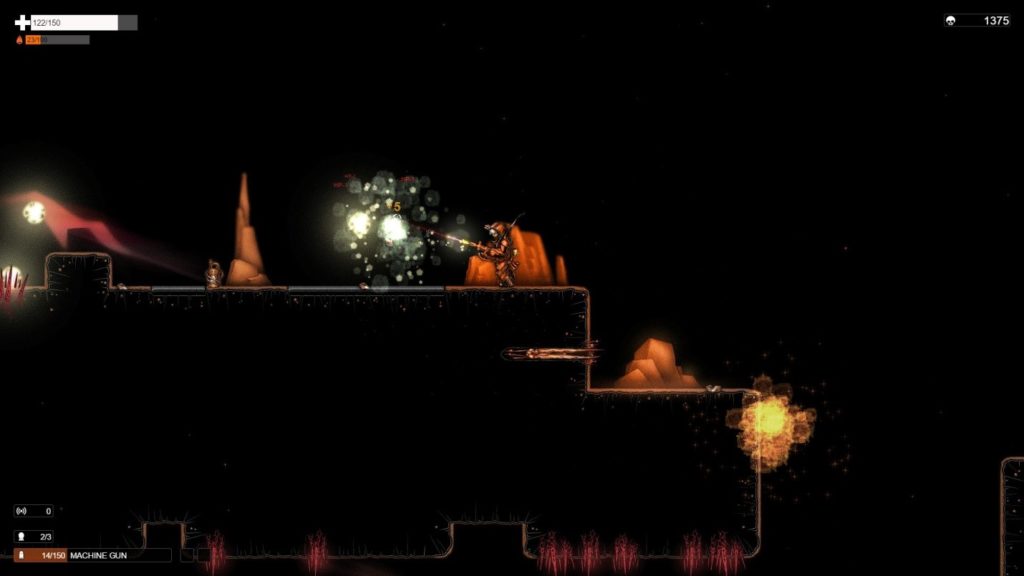 There are various natural resources to be found and used, as well as some items, of the less natural variety (unless the plants on this moon grow ammo cartridges as fruit?), found scattered through the levels. Burning or destroying some of the plant life and alien life may render usable benefits: a red coral looking shrub is damaging to the touch in its unharmed state but will result in a brief fountain of healing fluid once burned. Beneficial aspects of natural fauna can make the difference between life and death and I found myself leaving some untouched so that I could return and use them as necessary.

Your contact beyond this alien moon is a Mr. Anderson who is a representative of the Moon Resources Corporation, that you are apparently an employee of. Of course, it doesn’t take long for evidence to surface that perhaps the MRC has ulterior motives and things may not be all that they appear. Things get even more hectic with the appearance of raiders who seem to have taken a personal interest in foiling MRC and apparently enjoy playing mad scientist with previously captured MRC employees… or do they? The music and sounds that accompany you on your adventure pull you into and immerse you in the deep space ambiance, as the music starts with an infrequent, thriller-esque intensity, and from level to level increases its depth and intensity, effectively raising the strength of the game’s pull.

Upgrades to weapons and armor can be made at any time, as long as you have either found or can afford an upgrade canister, by activating the upgrade menu, the upgrade menu is simple and self-explanatory allowing  for upgrades of the suit, ammo, and weapons as well as offering the possibility to unlock other weapons. All in all, there are six weapons, four that can be unlocked through the upgrade menu which includes a shotgun, minigun, hand-cannon, and plasma rifle. The player also has a jump pack that is upgradeable with a fuel tank that is expandable. 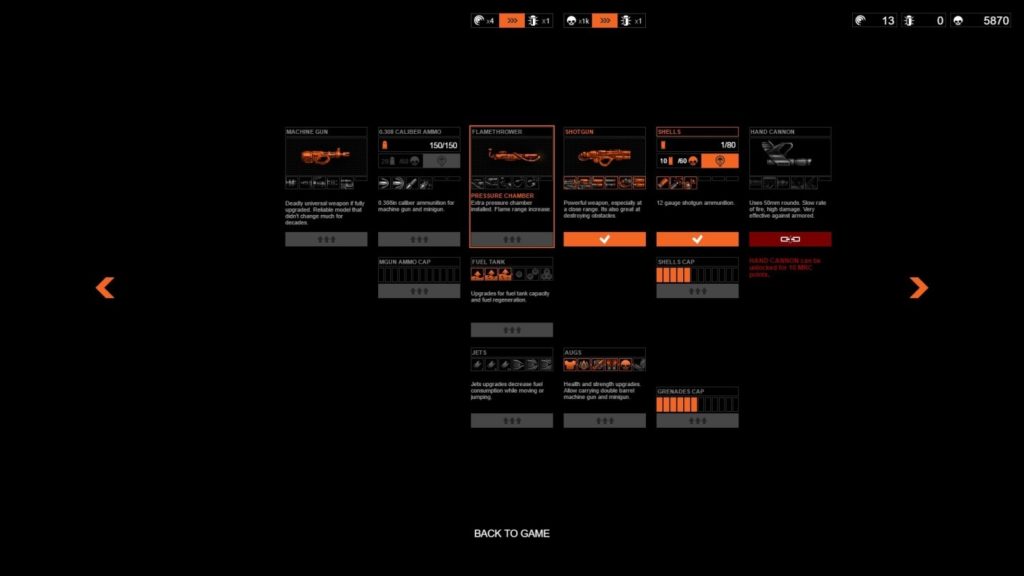 Currency can be earned by doing… what you do; wander around, killing space aliens, the random turret or twenty, and finding mining nodes. Regular currency is actually matter that is accrued as you dispatch enemies and you can either use that matter to purchase more ammunition in the upgrade screen or save up enough to purchase an upgrade canister that appears to be universal and can be used on any upgradeable item. The exchange rate of matter to Upgrade canisters is 1k to 1. Another form of currency,  MRCorp currency that is used to unlock weapons and can also be traded for upgrade canisters at a rate of 4MRC for 1 Upgrade canister. Upgrade canisters can also be found in the levels, usually in secret locations.

For game controls the player has the option using the keyboard and mouse or a gamepad/controller. Personally, I found the Gamepad controls to be frustrating as the ‘up’ on the analog is jump and it is all too easy to jump accidentally, or not get a jump when you want one. Being that much of the maneuvering through the alien caves and terrain require precise navigation, inconsistent jump mechanisms are bothersome.

While playing I experienced a few glitches, such as being stuck on a loading screen indefinitely,  inadvertently rocketing through solid walls, or being stuck in a single pose, giving the impression of skating across the screen. While the variety of glitches isn’t great, the frequency of encountering them became somewhat disappointing. 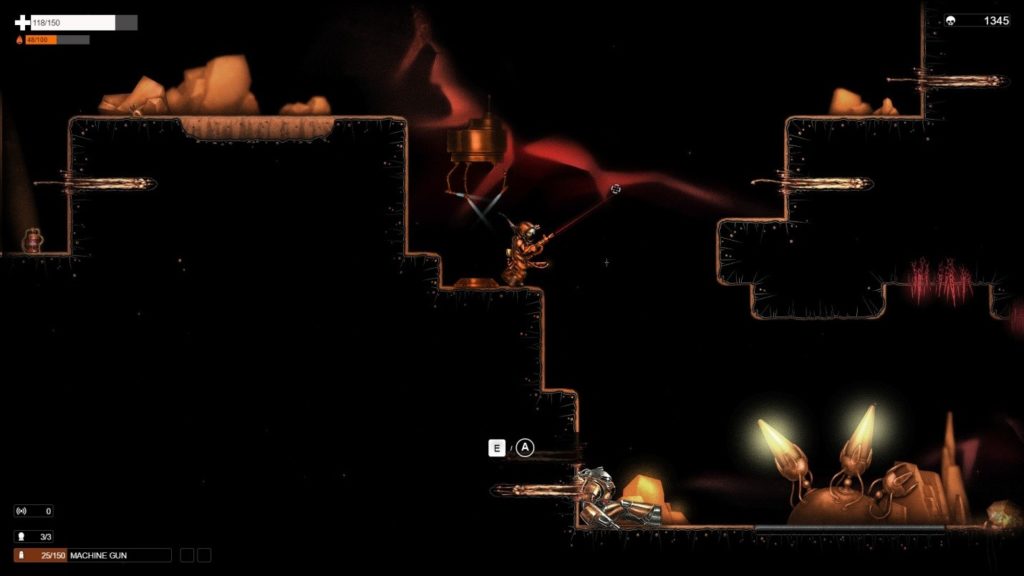 Despite any drawbacks, I found the game to be very absorbing and challenging. Gameplay requires a balance of skill and quick maneuvering as well as equipment upgrading and intelligent item use to keep you alive. After progressing through level after increasingly difficult level I found myself continually more compelled to play on and discover the intents behind the forces fighting for dominance on this dark and lonely moon.

Note: Our copy was reviewed on PC a code provided by PR.