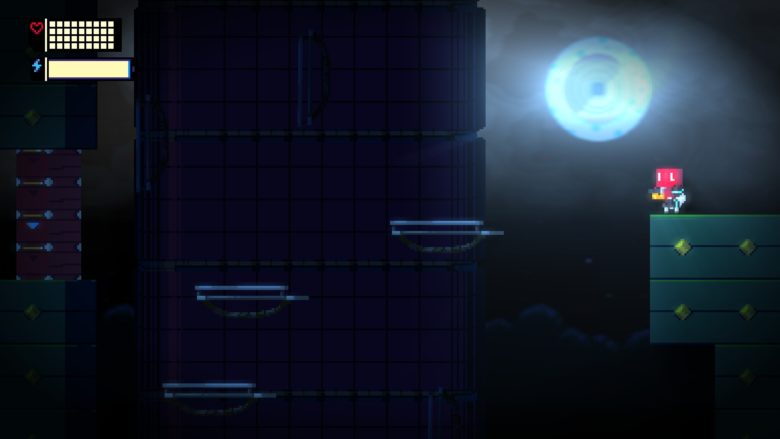 There is a handful of videogames that I make a point to play through every so often. It is a short list, but these games serve as a reminder of where I have come from as a gamer and what gripped me about the gaming experience. These aren’t blind nostalgia trips, but journeys through a digital scrapbook of sorts – bad haircuts and all. These games range from the RPGs (Chrono Trigger, Final Fantasy VII/IX, Secret of Mana) to FPS titles (Halo, Half-Life, Bioshock francises) to the Metroidvania games (Super Metroid, Castlevania: Symphony of the Night). This is our Gearend review.

While new RPGs and FPS titles aren’t in short supply, in recent years the latter genre has flourished with neoclassic titles like Axiom Verge and Guacamelee joining their ranks. It is in this atmosphere that a new indie title seeks to put us into the interchangeable shoes of a tiny, red bot that just might find it’s placed among the greats. 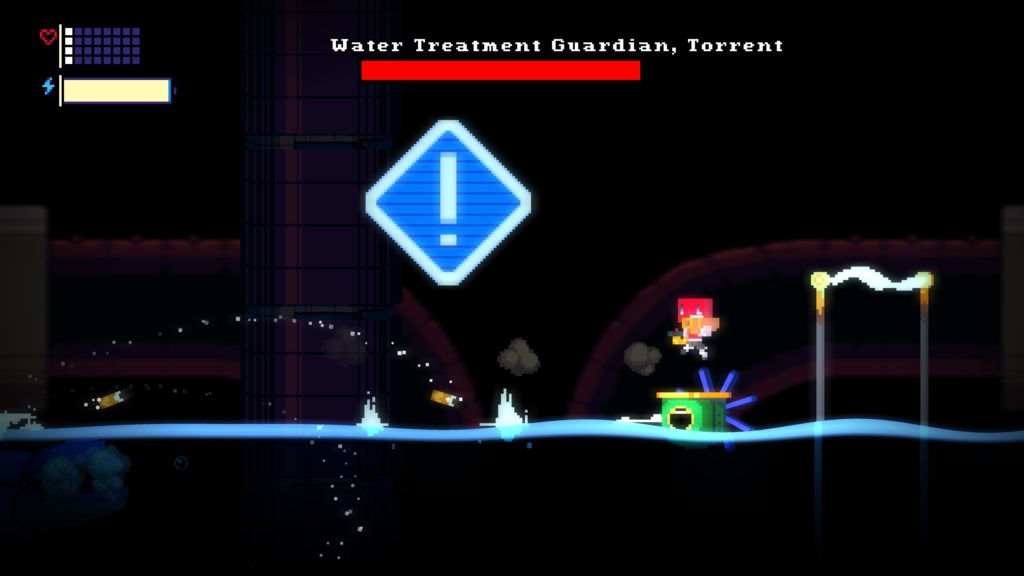 After a few years in development, Gearend was released by its developer, SolarLune Games (a one-man team), in November on Steam with PC and SteamOS/Linux support with MacOS on the horizon. While it had some performance issues out of the gate, this game is being lovingly cared for and updated by SolarLune Games. So, outside of being a Metroidvania style game, what is Gearend?

Gearend puts you in control of Epsilon-98, a charming red robot with a couple of problems. Epsilon-98 (also called Eps) is missing a couple arms and seems to have been powered on after a devastating, robot-led disaster. Along the journey, you will explore an overrun robotics facility to piece together what happened and to reunite with your human creator, Dr. Titus.

One of the unique features of Gearend is that all of Eps’ parts are interchangeable. Along the way, you find different arm types, legs, and torso cores that can be mixed and matched to your play style – all with unique benefits to your gameplay experience and how you explore the map. You will also find modules that will increase Epsilon-98’s damage capacity and energy reserves scattered throughout the world of Gearend. Let’s talk about that energy mechanic. 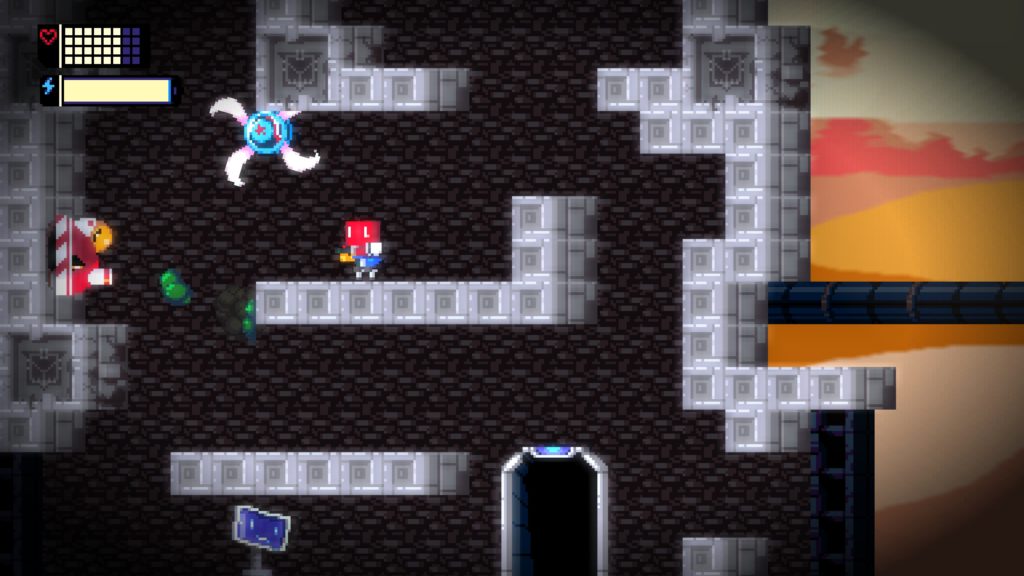 Your energy reserves make gameplay interesting as you traverse the landscape. You can’t just fire off laser beams or use leg power-ups willy-nilly, Eps has energy reserves that will deplete with their use. While they recharge eventually, your battery needs time to do so. This is especially noticeable early in the game and it makes boss fights more strategic. Where the Mega Man School of Boss Battles suggests that you nuke it hard (with the right weapon) until it’s dead, Gearend challenges you to make every shot count. You may only have a small window of opportunity to damage a boss, so it doesn’t make sense to be on a depleted battery!

So, what does this guy think about Gearend?

I will just put this right out there and say it: I am enamored with this game. To me, Gearend is a mix of Mega Man and Metroid (with just a hint of the Astroboy anime series) that I have been looking for for years. Its non-linear gameplay allows the player to explore the world and open up new possibilities as you gain new powers. The scenery has a gorgeous low-bit vibe going for it and the chiptune style of music is evocative of an era gone by. With all of that being said, the limitations of being the sole developer of a game means that squeezing in fixes has been a little limited since release. I had some glitches out of the gate, but SolarLune has been very responsive to the issues I’ve had and has helped to troubleshoot and fix them.

If you are itching for a Metroidvania-style game that will endear itself to you with charming characters and a soundtrack fitting to the style, Gearend is worth checking out. At this point, I can see Epsilon-98 and I having many, many adventures together. If Gearend is any indication of the creative potential of SolarLune, I want him to keep making games… because I will buy them, I will play them, and I will love them.

Here’s hoping that this little bot has many, many more adventures ahead of him. 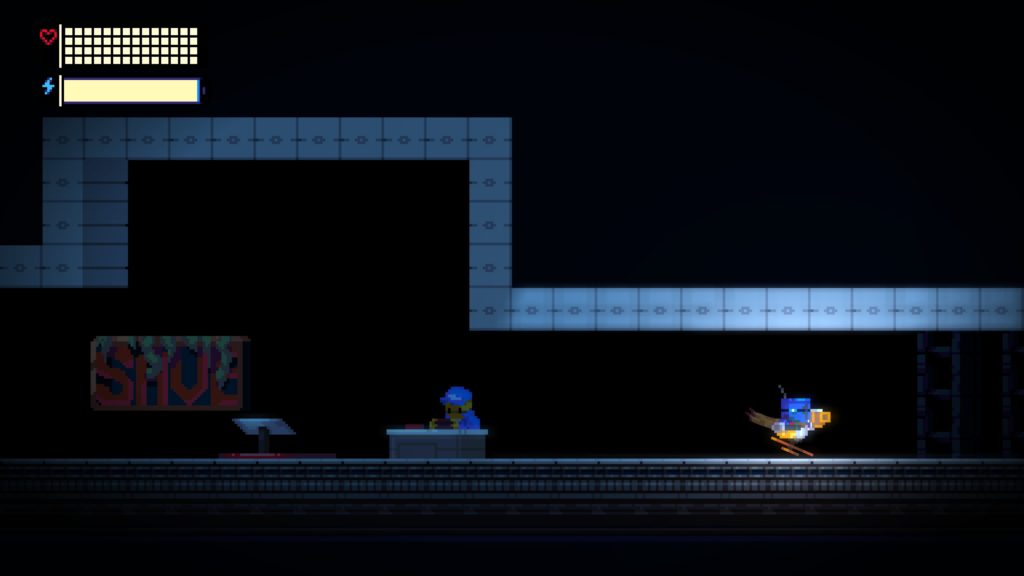 Written by
Damien Gula
Born in the heyday of mullets and the El Camino to a tech-foward family, Damien (a.k.a. Dame, PastorDame) quickly embraced the reality that “normal” is just a setting on a dryer. Damien is a pastor by trade and loves talking with anyone who is interested about life, God, and video games (in no particular order) - so, much so, that he and fellow MMORPG/GameSpace writer Matt Keith (Nexfury) create a podcast dedicated to that conversation. At the end of the day, Damien is a guy who loves his wife, his Mini Schnoodle, and crafting gourmet bowls of Mac N’ Cheese.
Previous ArticlePlanet Coaster – Update 1.5 & Adventure Pack DLCNext ArticleBrawlout Review