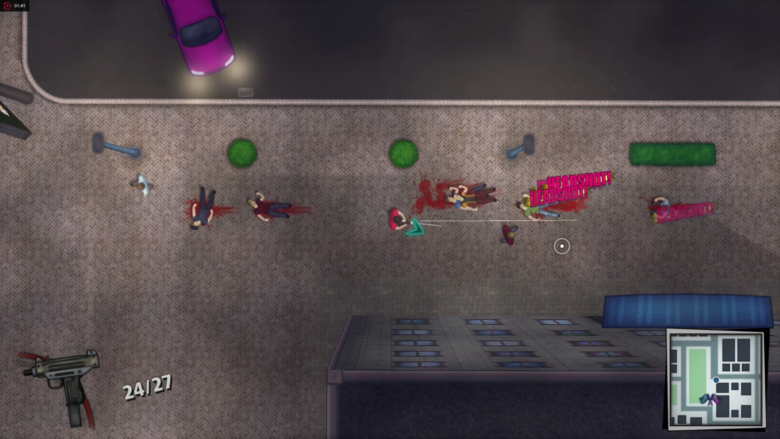 In Riskers, you will play as Rick, a garbage man that comes into possession of a briefcase full of cash. You decide to keep it, throwing caution to the wind and convincing yourself no one will notice. You are wrong. A couple of days later you come home to find your house was broken into, and your brother lying dead on the floor. From that point on, it’s kill or be killed. Do you have what it takes to get revenge for your brother’s death? We’ll see. This is our Riskers review.

The gameplay is split into two modes: open-world driving and indoor “clear the map” shooter. Both modes feature retro graphics with a top-down view. The only control option is mouse and keyboard, so movement is achieved with the WASD keys, while the mouse is used to aim and shoot. I would like to have seen controller support, as the keyboard controls felt clunky.

For anyone who has played Grand Theft Auto 1 or 2, the open-world driving piece of the game will be very familiar. The graphics, though retro, are a step up from circa 1999, past that, this part of the game falls short. Gone are the sounds of police radio chatter and pedestrians yelling at you as they narrowly escape their demise. These are replaced by speech bubbles, and lots of them, but this doesn’t bring with it the same level of charm. About the only thing you will hear is your footsteps, the hum of your engine, cars honking, and police sirens when you are being chased, none of which are done better than GTA. 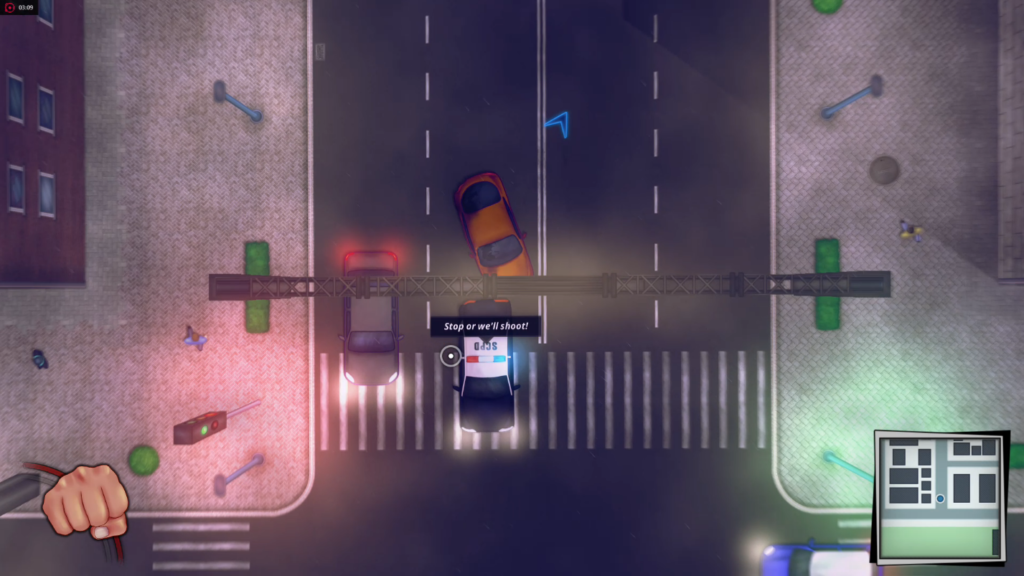 Worst of all, the driving just isn’t fun. In GTA you had a sense of speed that you won’t experience in Riskers. Different cars will travel at different speeds, but none of them ever made me feel like I was driving out of control. The only true difficulty in driving was getting used to the peculiar way the cars turned; it was as if every vehicle in the game had rear wheel steering.

There are several side activities to engage in while driving around the map. You can join races, take a Shizo pill and go on a rampage, and complete other various side missions if you like. As for the story mode, you will have some “get to spot X before time runs out” type of missions in the open-world, but mainly you are just going from your current location to the next building you need to clear out to advance the story. 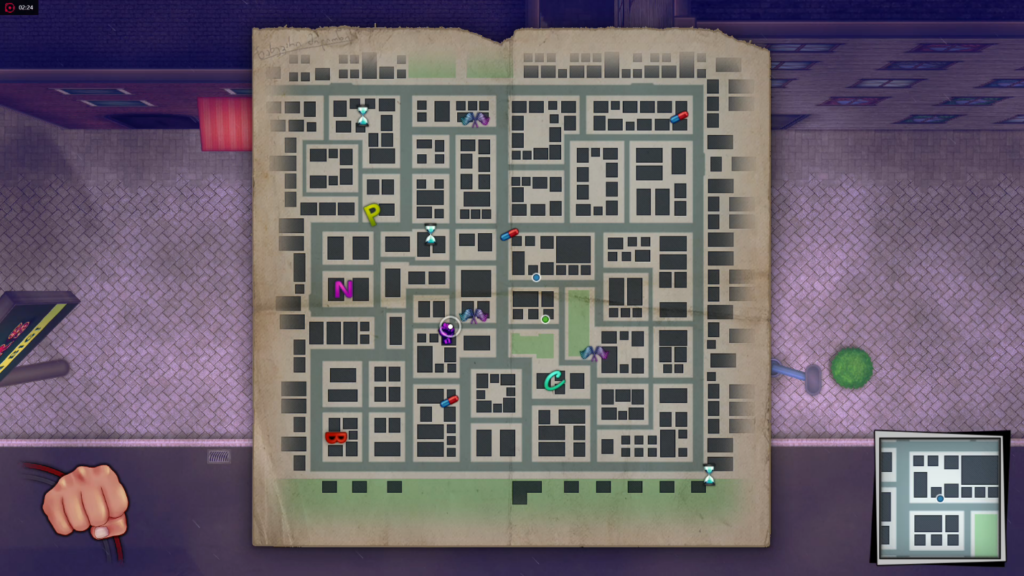 As for the interior shooter missions, again the gameplay will be very familiar. Anyone who has played Hotline: Miami will feel right at home in Riskers. You will start each mission without any weapons, and as you go from room to room killing your adversaries you can collect their weapons and ammo. You will be able to carry multiple weapons (they will transfer over with you to the open-world after each mission), switching freely among them if the need arises. Each weapon has its own characteristics such as being stealthy (fists and bat), more damage (shotgun), longer range (sniper rifle), etc.

In the end, it didn’t really matter how many weapons I could carry. The AI could only detect you in a very narrow field of view, and only able to hear shots that were relatively close by. You can walk right up behind an enemy and two hits from the bat would have a blood pool on the ground. I even had times where I would only hit them once to make them fall down, only to have them get back up and act as if nothing had ever happened since I still wasn’t in their line of sight. 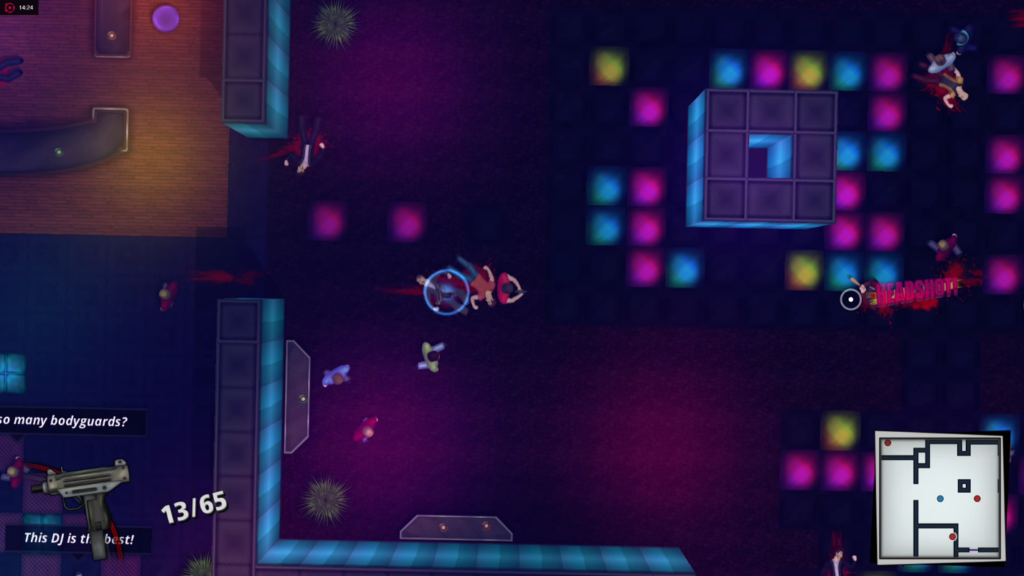 After the first couple of rooms, I would have enough ammo to just fire away with impunity. Pathing is very rudimentary, having every enemy taking the shortest path to reach you, making mowing down hordes of thugs easy as pie when they all converge into a straight line. To make matters worse, Riskers has a mini-map that shows the locations of enemies long before they are within visual range. And since bullets seemed to fly forever, all I had to do was funnel everyone through a doorway, shooting them before I ever saw them. The only challenge I had was when I got sloppy and rushed into a room out of boredom.

Many of my favorite games from back in the day just don’t hold up to the test of time due to outdated graphics, sound, or controls. In general, I don’t mind new games that get inspiration from some of these older hits, as long as they find a way to improve upon their predecessors. Unfortunately, Riskers doesn’t pull this off. The open-world lacks the reckless abandon found in GTA, and the shooter missions are not up to par with the stylized graphics and pace of Hotline: Miami. If I didn’t have any prior knowledge of the games, I would swear GTA and Hotline were the evolution of Riskers, not the other way around.

Written by
Mitchell Gassner
Old enough to have played retro games when they were still cutting edge, Mitch has been a gamer since the 70s. As his game-fu fades (did he ever really have any?), it is replaced with ever-stronger, and stranger, opinions. If that isn't the perfect recipe for a game reviewer, what is?
Previous ArticleRoad to Dunkirk DLC Expands Sudden Strike 4Next ArticleShin Megami Tensei V officially coming to the Switch