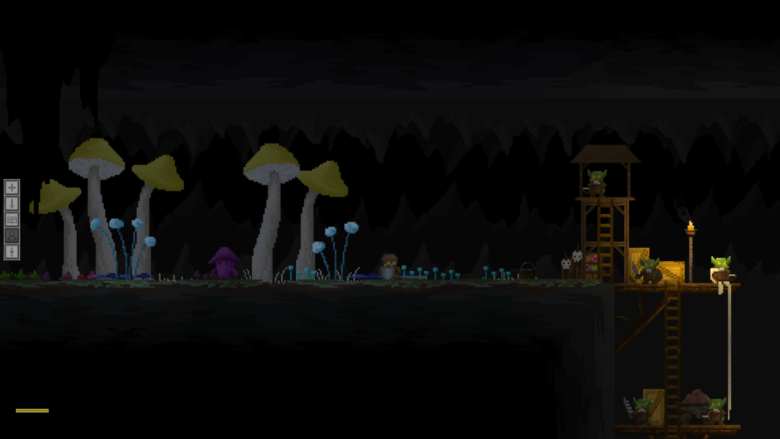 Across the landscape of many mythos, dwarves have a limited range of activities that they truly find joy in. Typically, those things fall into three categories: mountains, mining, and mead! One cannot blame them for their reclusion in a world of Man though, specifically in Tolkien’s Middle Earth. I imagine that they would find themselves often mistaken as taller, hairier Hobbits or short, squat men-folk. This is our Regions of Ruin review.

Dwarves are a proud people. If the Son of Glóin taught us anything, it is that you should never toss a dwarf anywhere unless the circumstances demand it… just don’t tell the elf! Well, we are about to toss conventional, dwarven wisdom out the window with our bearded brethren and toss a dwarf or two out from under the mountain and into adventure!

Developed by Vox Games, Regions of Ruin tells the story of the impact of dwarven complacency within their world. While a great war raged between Men and Centaurs, the dwarves retreated to their halls under the mountain. But the engines of war find fuel for their fires among the willing and unwilling without discrimination. With their glorious halls overrun by orcs and goblins, dwarvenkind found their world surprisingly different than the world they left generations ago. It was ravaged, desolate… their people were scattered and their great cities in ruin. 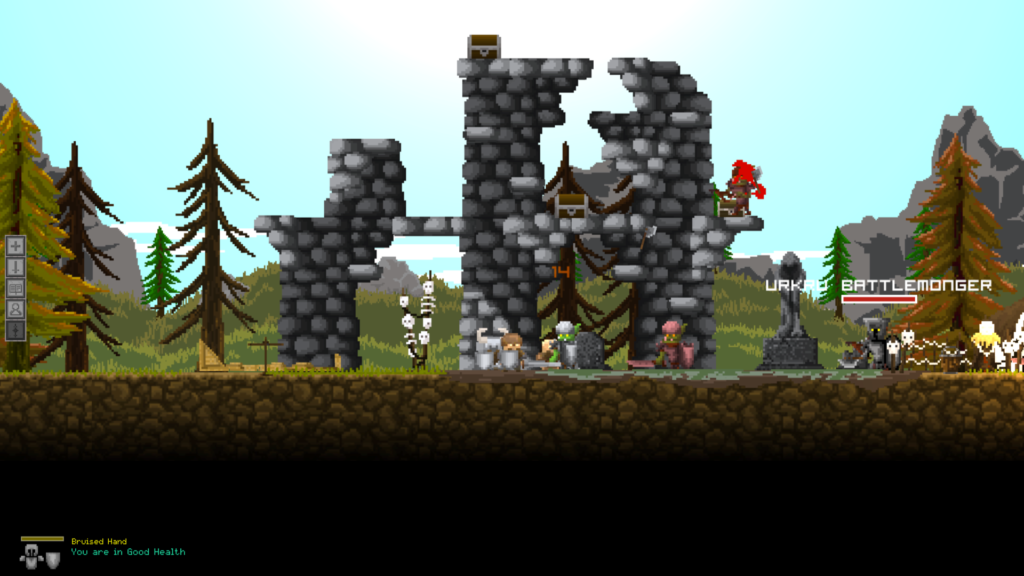 It is here that we find our hero: you. It is within this world that you must reclaim territory though exploration, conquest, and colonization. As you take back land, you free and reunite with kin to reestablish the glory of dwarf-dom. So, how is this done:

Regions of Ruin is a 2D, side-scroll, hack and slash RPG. The controls are fairly simple – you have your standard movement keys, one for jumping, one for dashing, one for sneaking, and one for shield blocks, along with your three attack types: quick, heavy, and throwing. But be careful with your actions; while dwarves are dangerous at short distances, quick actions require stamina – a resource which depletes as you jump, dash, and swing your weapon. This resource does recharge, but it takes time.

On your journey, you meet other dwarves whom you recruit in your quest to rebuild the dwarven empire. For some dwarves, they need convincing of your valor and determination before they will assist you. For others, it is simply a matter of freeing them from their captors. 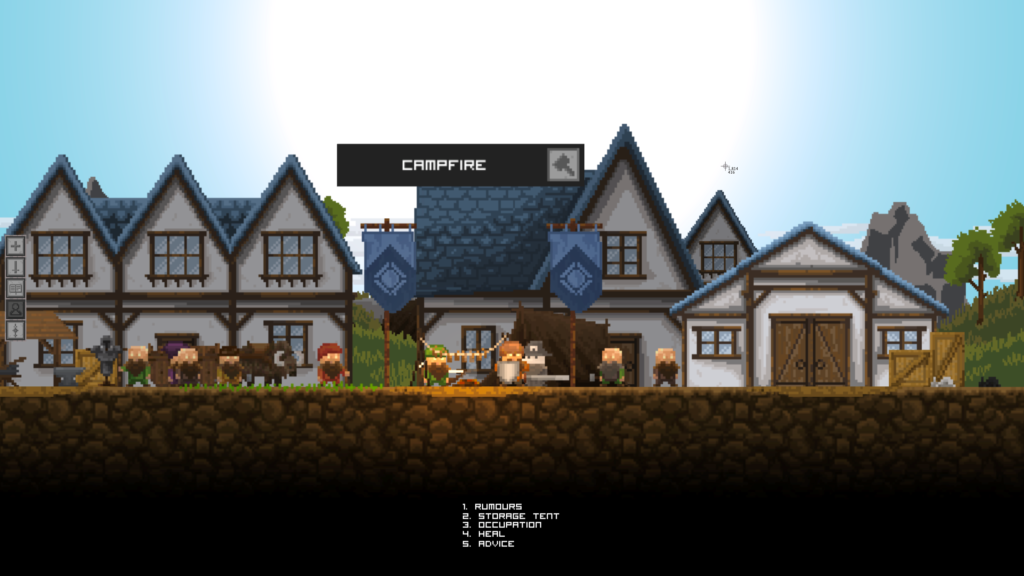 Then, there are those whose blades find loyalty if the coin purse is heavy enough. Hiring dwarves to fight alongside you can be the tipping point in claiming a new territory. Some areas require a little extra muscle and each mercenary has their own skill set to aid you. Extra territories won mean more resources to fuel the new settlement.

“We built this city…”

With each new area you conquer, you gain access to the land’s bounty. These resources are useful as you build and upgrade buildings within your settlement. The settlement is your home base where you level up, craft equipment and supplies, heal, repair items, and listen for rumors of where you are needed next.

When I said “flesh wounds,” I really meant it. Regions of Ruin has a ridiculous list of potential wounds which can inhibit your movement speed, rate of stamina recharge, and jumping height. It’s almost comical to watch the long list of status ailments afflicting you character after a hard battle, all while marveling at the resilience of dwarvenkind! 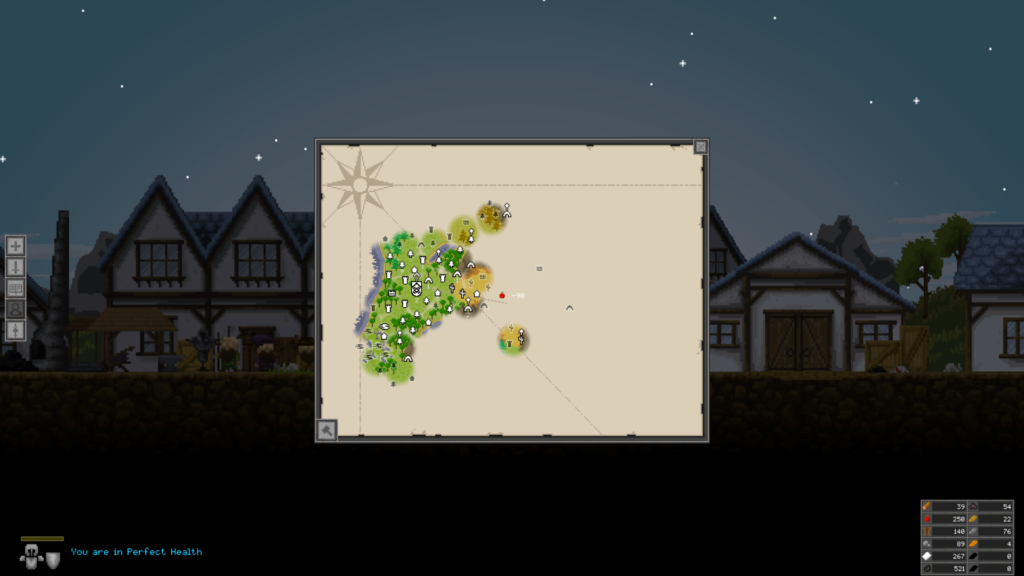 Final thoughts: “Over the hill and under the hills we go!”

Regions of Ruin is a fun indie title. It is a refreshingly different take on a fantasy-themed game. Where most would have you dawning the mantle of a heroic human or elf, it’s nice to see a dwarf take center stage.

The challenge in that is that your character moves like a dwarf: rather slowly but, (as I stated before) dangerous at short distances. The dash mechanic helps this matter and its exploitation is limited by the stamina meter. The place where this gets a bit cumbersome is when you have greater distances to close. The pacing of leveling up also feels sluggish, too. On the plus side, most of the regions that you visit are fairly linear and contained, with boundaries that fade into darkness instead of stopping – a neat touch.

While I’m not typically a fan of the Lo-Def art direction, it works for the medium without getting in the way too much. The rugged pixels seem to mimic the tone of the game itself, but there are a few places where this makes platforms difficult to find and some flying projectiles difficult to see. Guess that’s just another ruptured spleen for you… 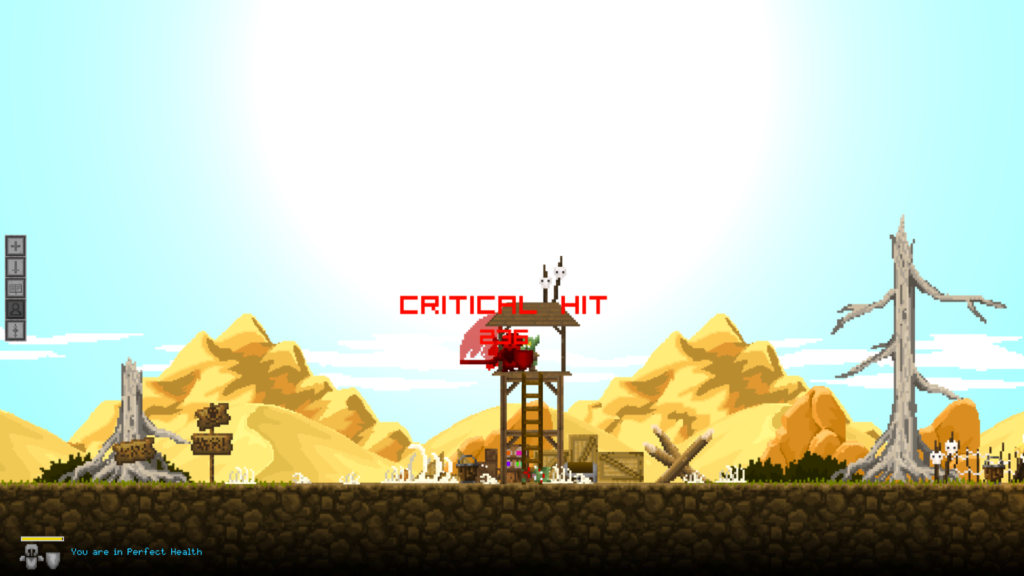 If you like side-scrolling action with RPG mechanics, Regions of Ruin is a fun romp. For $16.99 USD on Steam, it’s not a terrible price for an indie title with the type of depth and care for lore that it contains… and there is a lot of it. This might be to your liking or not – depends on whether or not you like to read quest text.

As for me, I’m going to keep bringing the thunder from down under the mountain. Those mines and leftover mead aren’t going to take care of themselves!

Written by
Damien Gula
Born in the heyday of mullets and the El Camino to a tech-foward family, Damien (a.k.a. Dame, PastorDame) quickly embraced the reality that “normal” is just a setting on a dryer. Damien is a pastor by trade and loves talking with anyone who is interested about life, God, and video games (in no particular order) - so, much so, that he and fellow MMORPG/GameSpace writer Matt Keith (Nexfury) create a podcast dedicated to that conversation. At the end of the day, Damien is a guy who loves his wife, his Mini Schnoodle, and crafting gourmet bowls of Mac N’ Cheese.
Previous ArticleBattlefield 1 – Turning Tides Release DateNext ArticleCrimsonland is out today on Switch