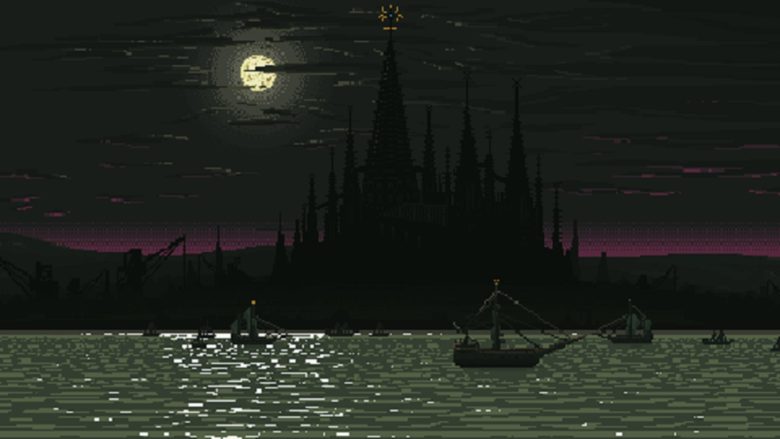 The Lovecraftian mythos has been all the rage in board and video games for the past decade or so, and Sea Salt looks hops aboard this trend like a diseased, possessed rat.  The game features an RTS-like system where you, the player, portray Dagon, the dark lord of the fishes.  Does the game do Dagon justice?  Can you truly find fulfillment in meting divine punishment upon your wayward parishioners?  Find out below – this is our Sea Salt review!

Sea Salt is a pretty game.  I really like the pixelated aesthetic.  Charming sprites are used to portray monsters, villagers, and heroes alike, each of which is animated and presented very well.  Impressively well, in fact.  Some animations that really grabbed my attention are flames spewing from an enemy with a flamethrower and another enemy rolling past my minions à la Dark Souls.  The artistic rendition of Dagon’s apostles (essentially which class you play) is also well done.  The audio (music and sound effects) are thematic and enjoyable. 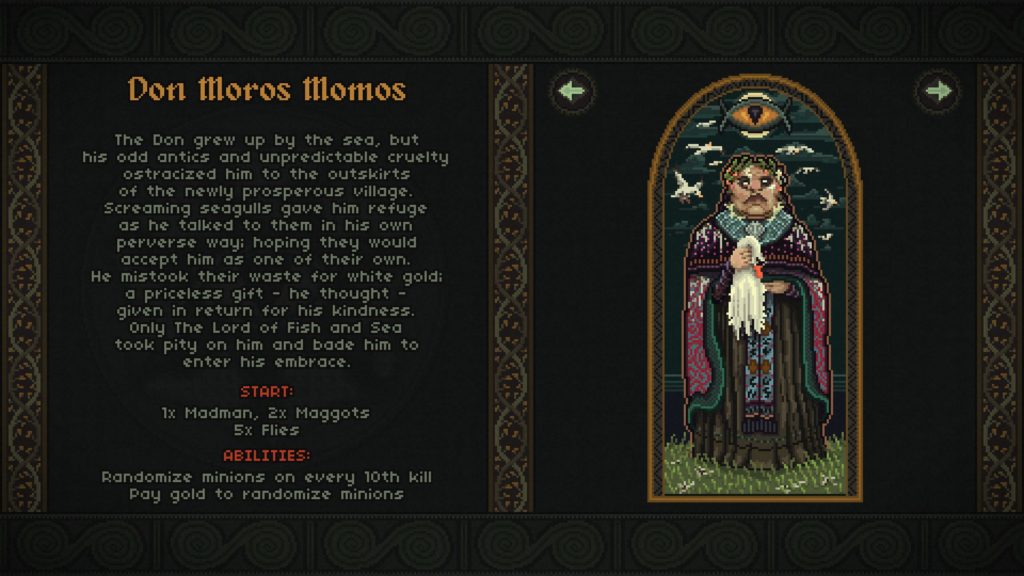 Sea Salt starts with a cut-scene showing Dagon’s high priest rebelling against his god, because, you know, he’d rather not kill himself just because.  The god you portray is appropriately butt-hurt and promptly sends his minions forth to destroy all of his followers.  Ok – so storyline-wise, not a great start.  I suppose we needed a reason to unleash the forces of the deep upon the land, but I feel like the developers could have tried a bit more.  As the game progresses, additional cutscenes show how the high priest has spun his rebellion and their impending doom as a test of their faith and subsequent mobilization of defenses.

The world appears to be the Earth as Lovecraft knew it, with the approximate time period landing somewhere between 1600 and 1850.  You’ll see wonders such as alchemy, necromancy, firearms, and similar wonders as you parade around the city on your quest to the cathedral.  As you complete each level (comprised of several screens that must be cleared of enemies before progressing), you’ll be presented with the world map and occasional opportunities to pick alternate paths.  This suggests the possibility of re-playability, but wanting to play the game more than once is a tough sell – more on that later.

Is there a benefit to the various paths?  Yes, as it turns out.  On at least one out-of-the-way level I explored, I ended up finding a witch that was to be killed for… witching, or whatever.  I was presented with an option that yielded a new type of unit for me as a reward.  Unfortunately, there does not seem to be a sense for exactly how many minions are unlockable but trying to figure that out adds some joy to the exploration of the game. 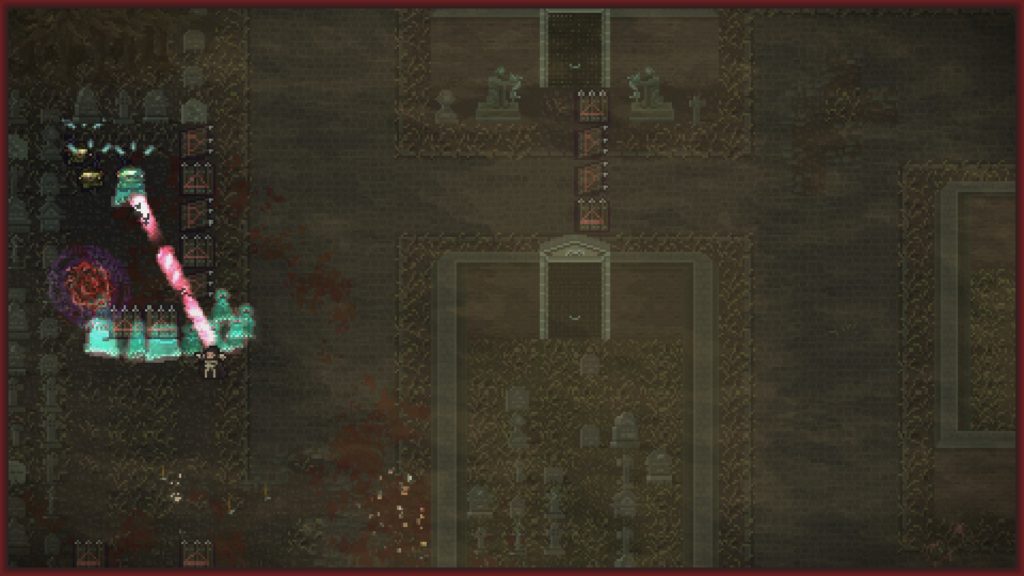 The systems are very simplistic.  The player moves the eye of Dagon around the battlefield with a standard WASD control scheme, and minions use that as a focus to follow.  Pressing space bar instructs minions to attack enemies near the player’s focus.  Occasionally enemies drop gold, which can eventually be used to purchase additional minions, although alters can also spawn new minions of the player’s choice.  That’s pretty much it.  Using those mechanics, the player must travel the map and slaughter enemies which use a variety of different attack types, including bullets, melee weapons, fire, and alchemical glue bombs.  It is nice that even if killed, one can restart from the beginning of the present screen with what troops one began with.

The mechanics are generally smooth, but some bugs do exist.  Occasionally, for example, a leaping minion of mine would get trapped in a wall.  The translation and editing are also sub-par in places, not to mention the writing.  In fact, the script seems to be the least polished portion of Sea Salt, and something that playtesters really should have found.

The game’s overall difficulty (only having one beginning difficulty and one hard mode unlocked after normal mode is finished) starts rather weak and ramps up sharply in the late game.  Level difficulty is predicated largely on what enemies are available, what terrain features protect them, and what hazards are on the level.  One level, for instance, had fields of grain that would flash burn if exposed to fire, whereas other levels had ballistae that did massive damage to the unwary minion.  Levels often had boss fights also, which, though not particularly complex, I genuinely enjoyed.

Sea Salt also features an arena mode that has levels based on levels that the player has already completed.  Each round of the arena spawns new enemies for the player to attack.  I didn’t notice a sharp increase in the arena’s difficulty as rounds progressed, but it seemed to me as if the enemy types did evolve over time from less difficult to more… but that wasn’t necessarily a hard and fast observation. 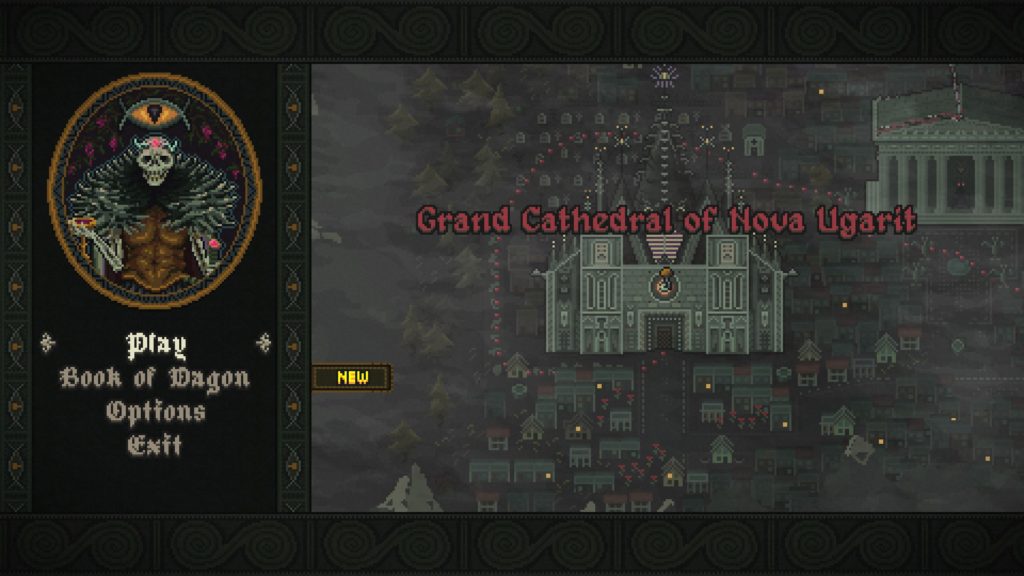 Progression in Sea Salt is not much more complex than the mechanics.  One can unlock three apostles in addition to the starter apostle, as well as an unknown number of minions.  I didn’t find all minions to be altogether useful, so I stuck with a few tried and true critters and felt ok with it.  The completionist in me wants to collect all minions (one of which you can only get by finishing the game), but I’m not sure I want to put that much energy into the game.  All of this points to an opportunity for re-playability, but not a huge amount of incentive to do so.

Frankly, had Sea Salt come out in the 1990s, it would have rocked the gaming world.  Its graphics and unique storyline would have been revolutionary.  Unfortunately, in the present age, Sea Salt simply doesn’t offer enough to merit a place among the greatest of games.  That doesn’t mean it isn’t worth playing.  This isn’t a game for someone who craves a traditional RTS or RPG, but if you really enjoy Lovecraft or other games that feature the player as the ‘bad guy,’ then this game may be a good fit for you.

A PC/Steam game key was provided for this review.

Tags: lovecraft, pc, pixel art, review, Sea Salt, steam
Summary
Sea Salt looks and feels like one of the great DOS games of yore. It features complex and well-designed pixel graphics with an interesting premise – being a dark, Lovecraftian god and punishing the unfaithful in the best way dark, Lovecraftian gods know how. This review explores this horror-themed, indie real-time strategy game – check it out, if you dare!
Good
Bad
6.5
Fair
Previous ArticleHere’s what’s coming to Rocket League in Winter 2019Next ArticleSee a tiny bit of gameplay from Command & Conquer Remastered