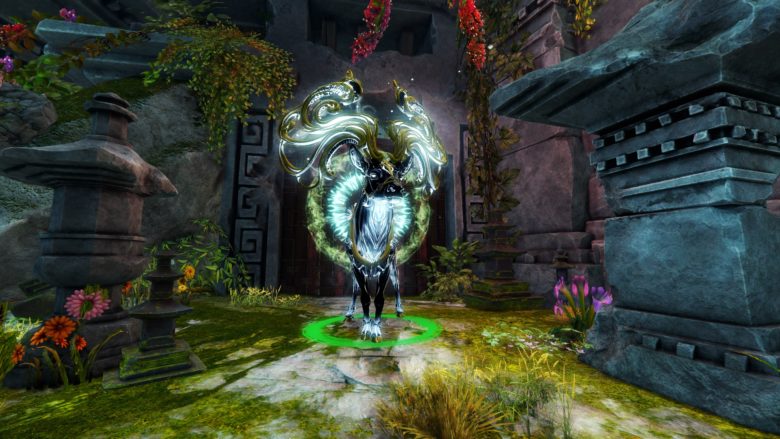 Guild Wars 2 is back with a brand new Fractal and for those of you ready to peek into the Mists, Gamesapce got an early look at Sunqua Peak.

While ArenaNet’s PvE focus may have slipped from Fractal content of late, these stand-alone adventures still provide a unique opportunity for the team behind Guild Wars 2. Raids might be great for engaging players and providing long term investment, but fractals allow ArenaNet to craft short takes and give a glimpse into another world. It seems fitting, therefore, that the latest Fractal follows the recent announcement of a third Guild Wars 2 expansion. With Cantha confirmed and ArenaNet heading back towards the Jade Sea, Sunqua Peak jumps headfirst into yet another disturbance in reality. Set somewhere between the “Winds of Change” storyline and the beginning of Guild Wars 2, this is an unabashed taste of what Commanders can expect when they arrive on the shores of Cantha again. 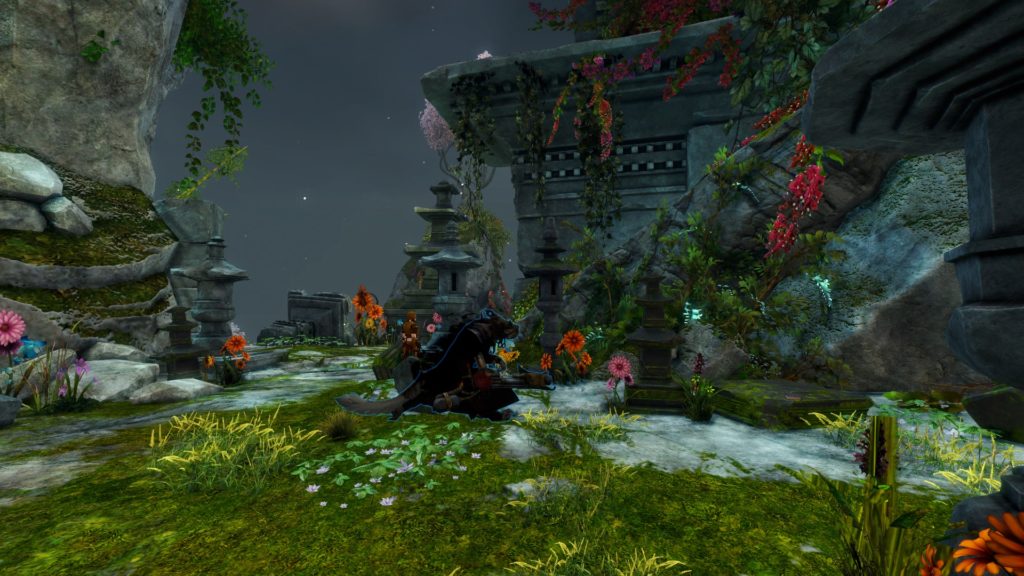 Don’t expect Sunqua Peak to be a direct interpretation of the upcoming expansion. While ArenaNet ushered us through our hands-on with this new trip through time and space, they confirmed that Sunqua Peak is still built with a distinctly Canthan aesthetic in mind. Stepping through the Mists and into the base of Sunqua, you’ll find a challenge snatched right out of Sunqua Vale. The Canthan influence on the weather worn architecture is obvious through this new Fractal, with archways and structures surrounded by bamboo and cherry blossom. While the pink fauna gently sways in a surrounding storm, you might hear a glimpse of what’s yet to come. If you have a moment, turn your volume up as you ascend Sunqua peak for a faint whisper of what we will probably hear in the next chapter of Guild War’s story.

Sunqua Peak doesn’t just differ thematically from other fractals either. This little corner of Cantha has a distinctly different approach to other Fractals you’ll find. Previous CM fractals like the Shattered Observatory and Nightmare are mostly divided up into three boss fights with a bunch of trash to tide you over between each encounter. Sunqua Peak, instead attacks this tale in time as a chance to take on a more cohesive narrative structure while attempting to still give players some overwhelming challenges.

Starting out at the base of a formidable set of stairs, you will find a mysterious spirit and a spiritual balance entirely out of kilter. The storm that rages around you is at least evidence of this. Proceeding along a path up the mountain this fractal, like so many others reminded me why Charrs are not meant to fly. Early on you’ll find a series of floating ledges, an ancient staircase that now hangs aloft and seems to be home to some unwelcoming air elementals. While these little cretins have a nasty habit of blasting interlopers into the air and occasionally off into oblivion, you’ll find some new tech to get you where you’re going. 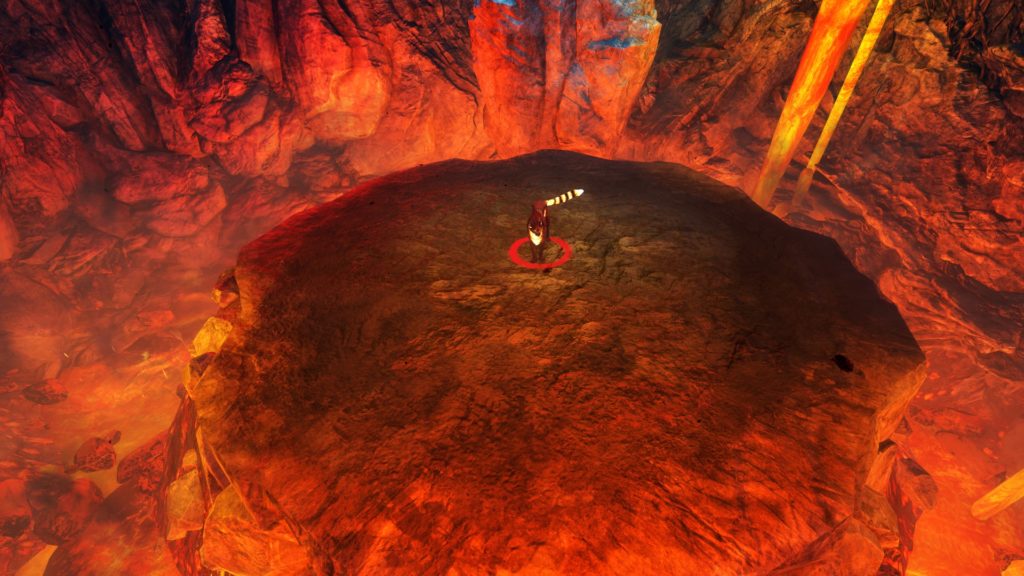 A nice little addition to the early moments of Sunqua Peak is a brand new buff providing players with the opportunity to jump even higher than they should reasonably be able to. There are no new action buttons, no mushrooms, and no mastery tracks in sight here. This little spark of magic simply adds a bit of wind in your sail and, like so many other fractals, is the first of many mechanics required to beat Sunqua Peak’s early bosses.

Jumping puzzles aside, progressing between boss fights is a fantastic opportunity to take in the changing backdrop for this ascent. Split into three very distinct zones, Sunqua Peak starts out in a section of a verdant cliffside, eventually delving deep into the mountainside before depositing players in a desperate firey dance with an opponent that you might be familiar with from the recent Sunqua Peak trailer.

Like the first boss, before it, This blazing hot encounter brings in plenty of new mechanics and a particularly vicious melee attack waiting for anybody getting too close for kitty comfort. Moving on from this, your adventure comes to a conclusion atop Sunqua Peak, facing off against a culmination of different mechanics from across this adventure. While we’re not going to ruin the mechanics or narrative tale, it’s safe to say that if you’ve never tried a fractal before, this narrative-heavy challenge is an inventive experience and an easy entry for those who haven’t’ tried a Fractal since the agony and fury of trying to take down that early Moss Man encounter.

While Sunqua Peak’s challenges aren’t tuned to be as unrelenting as a raid, things do ratchet up to be adequately unforgiving when they get hectic while still providing an entry point for new players. besides the glimpse into Cantha and a fun trip into the past, there are other reasons to take on this new Fractal.

Achievement hunters should naturally flock to this new weather-worn mountainside. Sunqua Peak adds a bunch of new achievements, but there’s more. Alongside a new reward currency, successful players can pick up Abyssal Fractal weapons back in the main Fractal Lobby which takes on a purple hue that is reminiscent of the tormented skins of old. There’s also an Endless inner Demon Combat tonic, which is best experienced yourself and players can work towards a brand new Abyssal Infusion. 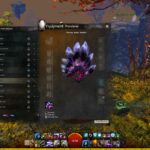 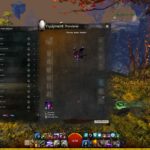 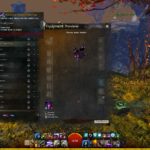 Sunqua Peak isn’t going to overhaul Fractals, but it definitely feels like a much-needed injection of content for this game mode and tells us plenty about what to expect from Cantha and Fractals going forward. You can check out Sunqua Peak in Guild Wars 2 now.

Written by
Ed Orr
For those of you who I’ve not met yet, my name is Ed. After an early indoctrination into PC gaming, years adrift on the unwashed internet, running a successful guild, and testing video games, I turned my hand to writing about them. Now, you will find me squawking across a multitude of sites and even getting to play games now and then
Previous ArticleActivision Targets CoD: Modern Warfare Cheat SiteNext ArticleConan Exiles Isle of Siptah Launches Today