Last year I reviewed The Bard’s Tale 4: Barrows Deep and found developer inXile had done a good job of blending in some gameplay mechanics found in recent dungeon crawlers while keeping the charm of the original grid-based games of the franchise. There were some technical issues plaguing the game, keeping it from being the best it could be. To top it all off players wanting an old school experience were put off by the modern design choices and at the same time, other players were claiming inXile didn’t go far enough in adding the current conveniences they have grown accustomed to. Over the last year, inXile has been addressing all of these concerns and last week released The Bard’s Tale 4: Director’s Cut. Were they able to cut through the technical issues of the original game and at the same time somehow magically satiate two diametrically opposed player bases? Pull up a chair and listen to the tale of my second adventure in the Bard’s Tale 4 world. This is our Bard’s Tale 4: Director’s Cut review.

We could spend a lot of time going through the core features and gameplay of The Bard’s Tale 4: Director’s Cut but, honestly, the basics haven’t really changed since my initial review.  For anyone who hasn’t played the original release and is here trying to decide if it’s time to pick the game up, I would suggest checking out my original review to get you up to speed on what the game has to offer. Then head back here and check out the changes if you’re still on the fence.

For returning players, some of what we will cover here may seem very familiar to you. inXile has been adding in a lot of the fixes over the last year and depending on when you played the original they may or may not have already been implemented. At the very least you are getting a new end game dungeon, The Royal Necropolis of Haernhold, some new opponents to slay and subsequently new loot to plunder. There have also been a ton of tweaks, rebalancing, and bug squashing going on behind the scenes as well.

I am sure many people, myself included, wondered whether inXile had addressed the community concerns, and overall they succeeded in attacking all the major concerns. Let’s start with the big-hitting changes.

My preferred choice of control has always been a keyboard and mouse, but there are many people who like the compact nature of a controller. The BT4:DC has support for the Xbox One controller, and I must say that it’s quite intuitive. Sticking to normal convention, the left stick replaces the WASD keys for movement and the right stick controls the camera free-look. In grid-based movement you can even use the D-pad for authentic old-school 90-degree snap turns. 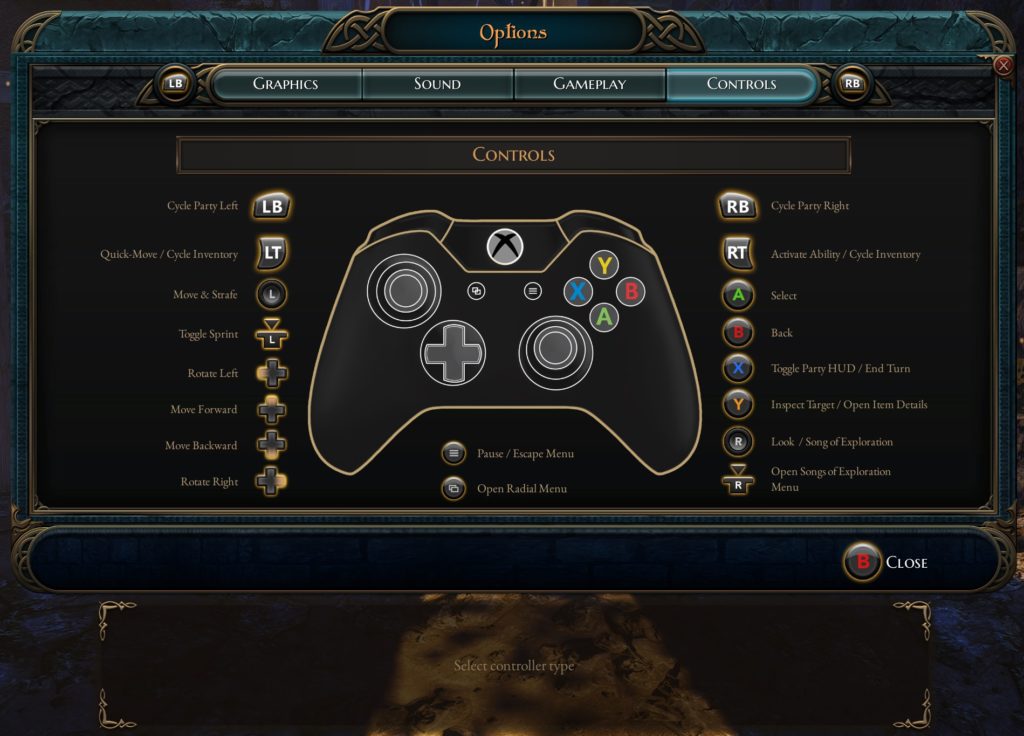 My biggest praise has to be in the use of a radial skill bar during combat. Selecting a skill or spell is as easy as pushing the left stick in whatever direction the skill is located on the circle and pushing the A button. This may seem a minor choice, but so many games keep a horizontal skill bar and I detest having to tap back and forth on the stick to select a skill. I always end up either too far or not far enough and then select the wrong skill on accident. This radial selector is also used on some of the UI menus as well. Again, it only saves a second or two but it just feels smoother than moving up and down to select a menu item.

Overall, the little things like the radial menu have turned me to the dark side of PC gaming and I found myself using the controller instead of mouse and keyboard to play through the game. If all games could implement the use of a controller as well as inXile did for the Bard’s Tale 4, I would be a happy camper.

The grid-based movement was one of the iconic elements of the genre thirty years ago, and the move to a more modern free movement system was one of the loudest complaints from the old-school regime. inXile didn’t go all the way back to the true grid-based system from the original series but they have found a compromise that should check another complaint off of everyone’s list.

With a true 3D environment and a free view camera, it isn’t always obvious which spot you are going to move to. inXile overcomes this by representing each grid space with a glowing glyph on the ground. These glyphs are blue, and whichever one you will move to is changed to green. It is a simple yet elegant solution. Devs showed they listen too. They heed the mistake of not giving options and have provided an option so that it can even be turned off if preferred.

The only missed opportunity I see with the grid-based movement is very minor. I would like to see an option to have the camera auto-center when you move. When using a controller this would make movement very fluid. 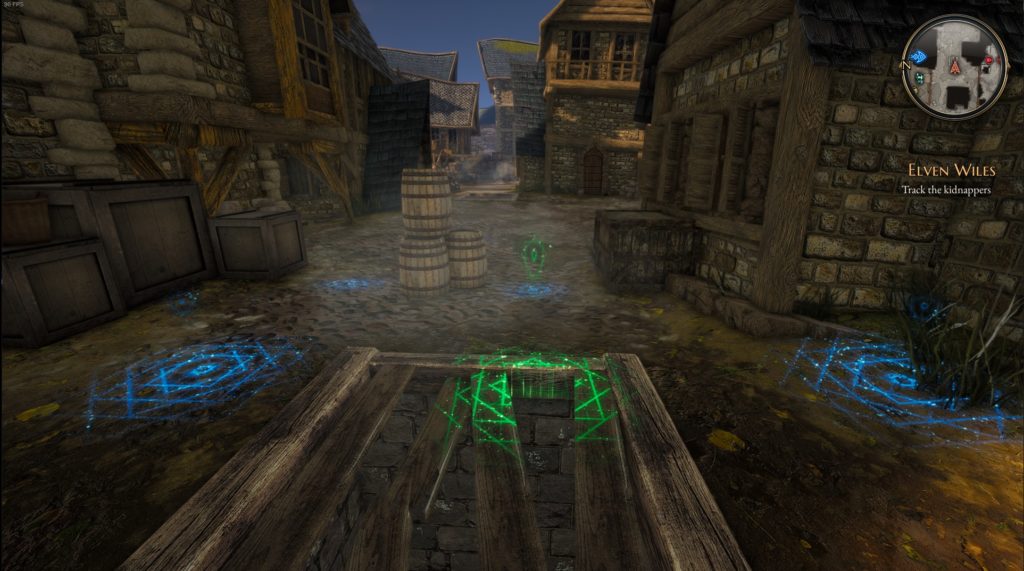 I had accepted the design decisions to modernize certain aspects of the game as a necessary evil to make the game appeal to all but the most hardcore players searching for an authentic grid-based dungeon crawl. For me, the technical issues at release were what held The Bard’s Tale 4 from being better received. The game had plenty of bugs and not the variety that you had to go out and kill. No, I’m talking about the kind that can ruin your immersion.

I consider myself lucky since most of the problems I encountered were infrequent and not game-breaking. A perfect example is the annoying pause encountered in combat as I had to wait 10-20 seconds for an enemy frozen mid-attack to finally finish their move. Some players had it much worse and had to deal with frequent game freezes and crashes to desktop.

My biggest issues were centered around graphics. First and foremost was frame rate consistency. In my experience with Barrow’s Deep, I could only achieve frame rates in the high 20s with a Vega 64 graphics card at 2550×1440. That was the best case, with frame rates dipping into single digits at times. Switching to a lower resolution did help with maximum frame rates but the stuttering and freezing from the stalls still remained.

Another graphical issue was having black bars on the sides of my screen since even though 3440×1440 (my default monitor resolution) was listed in the options but wasn’t actually supported. I know, first world problems, but if you say a game can do something it should damn well do it.

I am happy to say that my time in The Bard’s Tale 4: Director’s Cut has been much improved on the technical side. I still haven’t encountered a single crash to desktop and the long pauses of combat have been virtually nonexistent. All around, everything feels more responsive and is most likely due to the squashing of bugs and optimization of code over the last several months.

That optimization is undeniable when it comes to frame rates. Not only does the 3440×1440 resolution work this time around, even at the higher resolution I am getting a good 15fps higher than I did a year ago at 2550X1440. I still see a dip in frame rates from time to time, but usually, it is when I swing the camera around quickly after just entering a new area and is nowhere near as big a swing as it was in the past.

Sometimes the little things are all it takes to make a big difference, and the Bard’s Tale 4: Director’s Cut is no exception. There are a plethora of minor additions, tweaks, and changes that make the Director’s Cut a better game. As a one-off item these could easily be missed (and I did miss some until I read the patch list and went back to check them out). Let’s start with the new stuff: 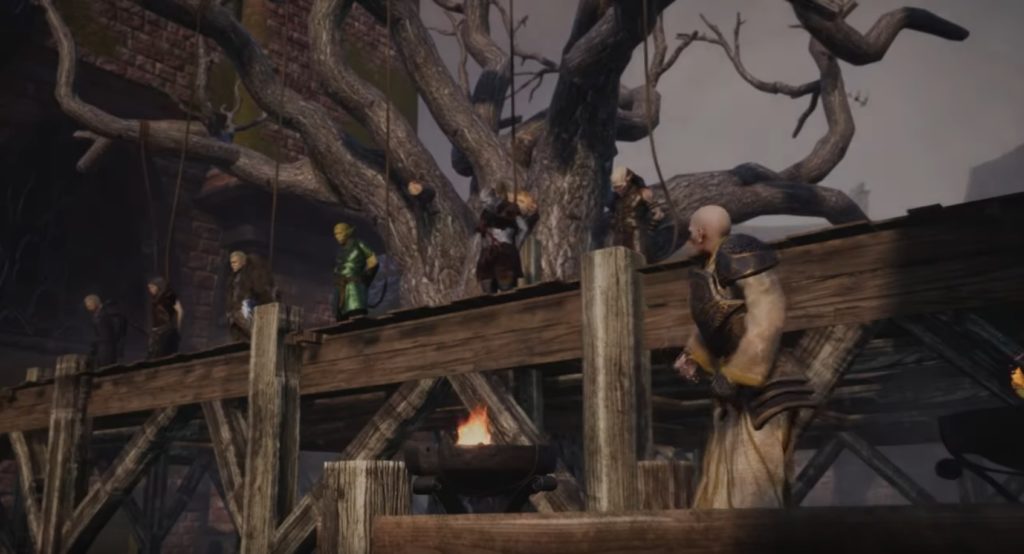 Now let’s highlight some of the back end changes.

These are just the tip of the iceberg and represent just some of the bigger changes I noticed. A full list of changes and additions made for the Director’s Cut can be found here.

With the release of The Bard’s Tale 4: Director’s Cut,  inXile has done a solid job of addressing much of the community’s concerns with the original game. They were able to give the players the options they wanted, allowing each person to tailor the game to whatever level of old-school vs. modern style they wish to play. All of the technical improvements and bug fixes have made the Director’s Cut a much cleaner and optimized game, and the horde of minor tweaks and additions have added a little more meat to an already good gameplay experience.

One thing I can’t quite wrap my mind around, and most will find it very nitpicky, is coining this version of the Director’s Cut. Generally speaking, a director’s cut takes an already completed product and adds in extra content that got cut and just didn’t make it into the original release. In this case, many of the changes and additions were added in previously through patches over the last year. It is all really semantics, and whether inXile decided to call this the Director’s Cut, Barrows Deep 2.0, or the ‘We Just Wanted To Fix The Things You Didn’t Like About Our Game’ version, they took an already good game and made it better.

Tags: Bard's Tale 4, Director's cut, grid-based dungeon crawler, old-school rpg
Summary
inXile has spent the last year upgrading the original Bard's Tale 4. The release of the Director's Cut is the culmination of all their hard work. They were able to address many of the community complaints with the addition of new game play options and have squashed many of the frustrating technical issues of the game along the way. The Bard's Tale 4: Director's Cut is the version of the game we deserved.
Good
Bad
8.5
Great

Written by
Mitchell Gassner
Old enough to have played retro games when they were still cutting edge, Mitch has been a gamer since the 70s. As his game-fu fades (did he ever really have any?), it is replaced with ever-stronger, and stranger, opinions. If that isn't the perfect recipe for a game reviewer, what is?
Previous ArticleArcheAge Unchained Livestream RecapNext ArticleFree realm transfers announced for WoW Classic