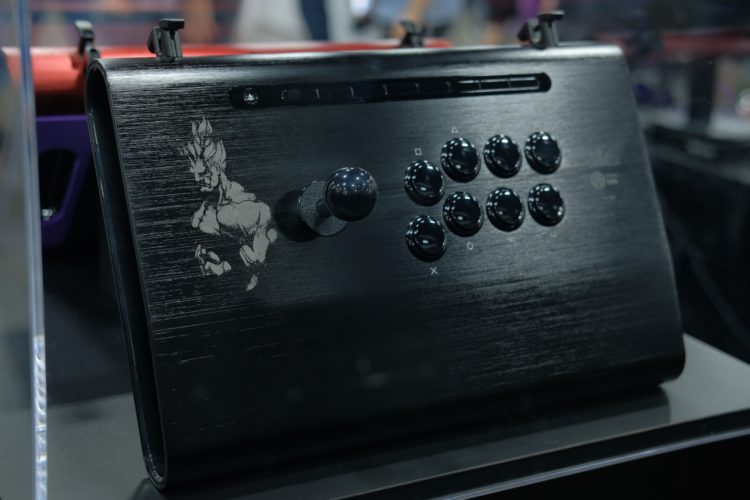 Of all the major events that grace the gaming calendar each year, the Evolution Championship Series, also known as Evo, takes the cake. This incredibly diverse community of fighting game fans come together for one goal: to prove they are the best. One company, San Diego-based Victrix, wants to help those players by providing them an option to game with the best fightstick around. Enter the Victrix Pro FS (Fightstick), a new venture for the young company who are better known for their eSports audio headphones.

Announced earlier this year, Evo 2018 was the first chance for fighting game fans to go hands on with the Pro FS. Built with the tournament player in mind, the Pro FS features a full-anodized aluminum body, Sanwa Denshi buttons and some quality of life features as well. The joystick, for instance, features the ability to take it out of the body and store it in the compartment underneath, making it easier to travel with. Additionally, the USB-C cable is fullly detachable and wraps easily around the top of the body of the stick for easy cord management. Every aspect of the stick has been thought out to make, in Victrix’s minds at least, the Pro AF the best fightstick on the market.

Which is a tall order especially considering the names who have supported the FGC for years.

Qanba, Mad Catz, Razer, HORI – all names players know as synonymous with quality fightsticks. Even Qanba’s lower-end option, the Drone, is a good performer for those players who don’t want to break the bank. Victrix, on the other hand, is relatively new to the scene and needs to establish a name for itself among the FGC. Thankfully, the attention to detail with the Pro AF help to set it apart from some of the competition.

“The victrix pro FS is a unibody, extruded aluminum,” Victrix General Manager Ozhan “Oz” Maker detailed. “So we extrude it – one piece of aluminum comes out as this sort of race track shape and then we CNC the buttons, the openings on the stick, the gates and then it’s polished, brushed and anodized. That is by far the biggest cost element of the stick. The buttons are from Sanwa Denshi. Also, when we started working on this, the speed and the accuracy and responsiveness were a big deal and that’s not just as a result of the switch itself but also the PCB. So we developed our own PCB in-house, so it’s laid out by our own engineers. Right now, this stick the PS4 version the fastest as far as we know (response time/input latency).” 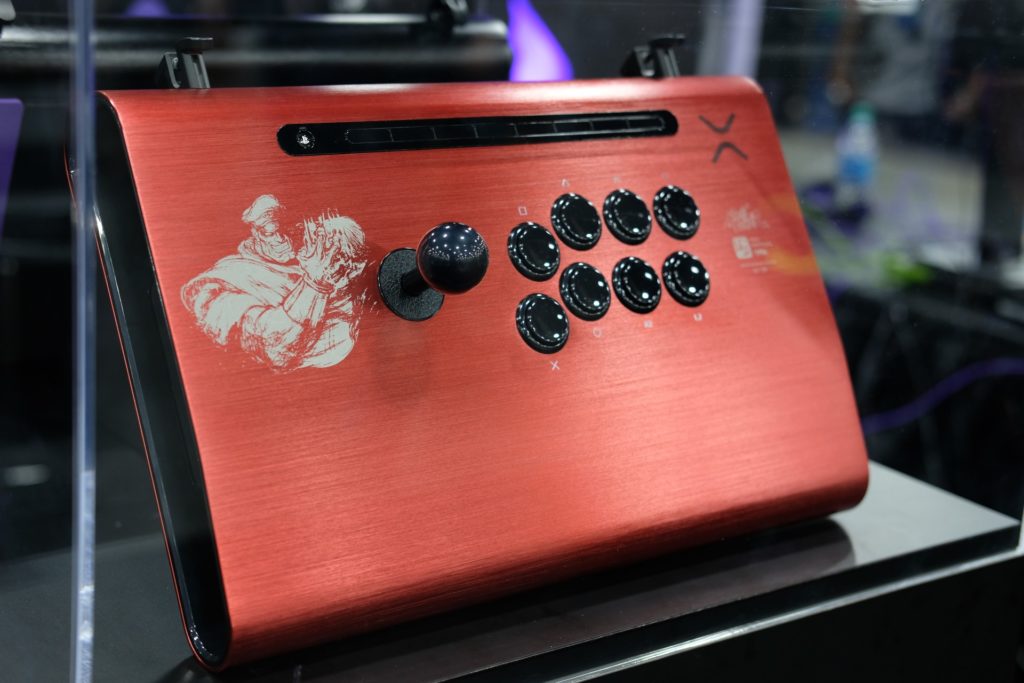 One of the Victrix Pro FS fightsticks on display at Evo 2018. [Image via Victrix]

One major comfort factor is the slight incline from the bottom of the body towards the stick and buttons. There is usually an incline on other sticks, but it’s often abruptly stopped with a hard plastic edge, and since a lot of players rest their forearms and wrists in that spots, fatigue can quickly set in. I know using my Qanba and Razer stick that is often the case. However, in my time testing the Victrix both at Evo and in my own gaming environment, there has been no such fatigue. The incline is so gradual that your forearms rest soundly on the board, grounding you to the stick. The Pro FS also weighs heavier than your average stick, but not so heavy that it’s a detriment. Weighing in at around 8 lbs, it’s lighter than its nearest competitor, the Qanba Dragon, but it’s heaver than the Razer or Mad Catz offerings. This helps in making the Victrix Pro FS feel as though it’s solid and grounded, not easily moved by combos or mashing.

After spending more than 20 hours between multiple fighting games such as Street Fighter V, Dragonball FighterZ, King of Fighters XIV and more, the Victrix pulls away as the best stick I’ve used so far. But that doesn’t mean anything if it doesn’t translate to tournament success. Oz knows this and as a result, multiple top players and influencers have been given to opportunity to beta test and provide feedback on the stick before it goes on sale this November. However, the feed back at Evo has been glowing. Every player I interviewed at Victrix’s booth was blown away by the stick – thought many did question why it cost so much. At the end of the day, though, of the multiple players I interviewed, every single person said they would love to own a Victrix. Professional players such as PandaGlobal’s Lee “Infiltration” Seaon-woo, one of the world’s top players, has expressed interest in owning the stick. Other players such as Alex Valle, Echo Fox’s Justin Wong, SherryJenix and more have been given a chance to test drive Victrix’s foray into uncharted territory and only time will tell if we start to see pros using the Victrix as their tournament equipment in the near future.

It’s also brilliant to look at. The brushed aluminum and LEDs that change color depending on the settings you establish on the stick itself give the Pro FS a lot of style. Add in the Street Fighter Special Edition sticks that Victrix showed off at Evo and the Victrix may not sport the incredible Anime inspired designs of other sticks in the field, but the original Street Fighter art on the special edition Pro FS sticks really add a lot of character. 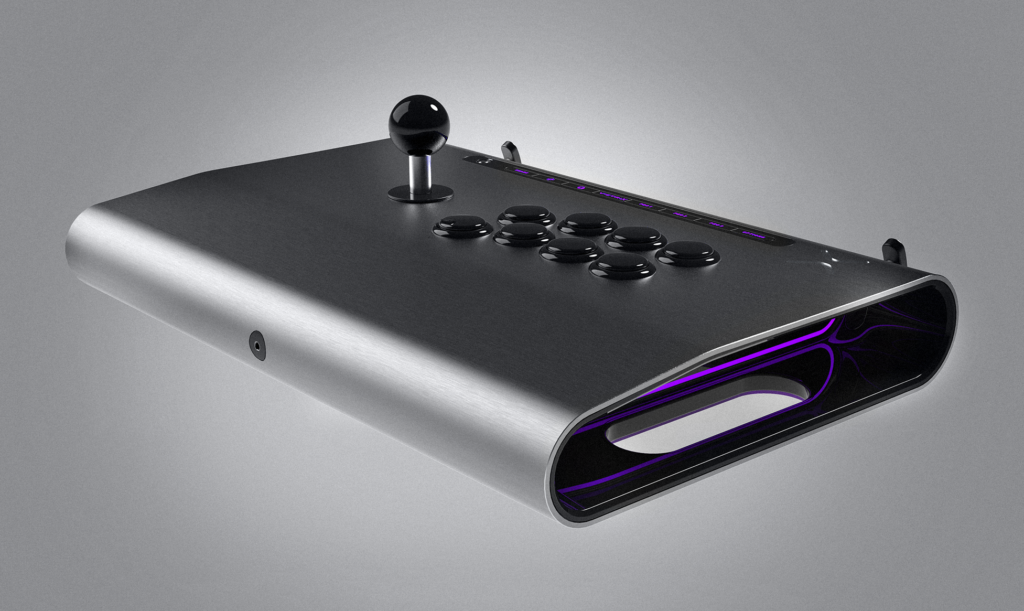 Fully moddable, the Victrix Pro FS looks to stand at the top of its class in the competitive FGC scene. [Image via Victrix]

All this is to say that the Pro FS is a very good stick. Victrix has since its inception been a company that is about the higher-echelon of gaming peripherals. This is embodied in their Pro AF headphones, the TeamAmp the company is releasing and now their fightstick. But that quality does come at a cost. The Pro FS is $350 – the most expensive stick on the market to date – and while the Street Fighter edition prices have not been announced, you can be sure they will cost more. Victrix knows that these sticks cost a premium, but they feel that the price is justified because of the premium quality of the product.

“[Players] are used to that $250 price tier,” Oz explained. “And then you have a $300 tier with [Qanba] Dragon, so when they hear $350, some of them flinch. It’s justified, in fact I find people justifying themselves they go ‘Jeez, $350….’ but then they end up going, ‘It’s metal, it’s better built.’ I think people appreciate the fact that a lot of time and effort went into that. Like the headset, we asked ourselves ‘What if we don’t cut any corners? And we did just that.”

Victrix is confident that they’ve built the highest level product to fill that niche in the fighting game scene much like they did in the esports tournament realm with the Pro AF. However, this is a beta still and the company is working out some of the kinks in the Pro FS. For instance, the joystick that detaches from the body does some times stick, making it hard to remove. This is an issue Victrix is already aware of and is moving towards eliminating in general production, but by and large the quality and performance of the stick is top notch. The fightstick natively supports PC use as well, and while the one I’m using is also meant for Sony’s Playstation 4, Victrix is preparing an Xbox One/PC model as well.

At the end of the day, the Victrix Pro FS offers players who are looking for the most premium product another option different than the gaudy hunks of plastic already available. The other fightsticks are phenomenal in their own respects, but the Victrix Pro FS aims to take that notion just one step further – pushing the limits of what’s possible in a pro-level fightstick.

Written by
Joseph Bradford
Joseph has been a freelance games journalist for the last 5 years, having written for multiple mainstream outlets. He loves all things technology and gaming and relishes the chance to write something new about them. When not writing, Joseph enjoys spending time with his wife and daughter in his home town of Las Vegas and explaining in detail why Balrogs do not have wings. You can argue with him on Twitter at @LotrLore.
Previous ArticleDoom Eternal Will Run at 30 FPS on Nintendo SwitchNext ArticleA NEW TRADING SYSTEM IN FORTNITE – YAY OR NAY? 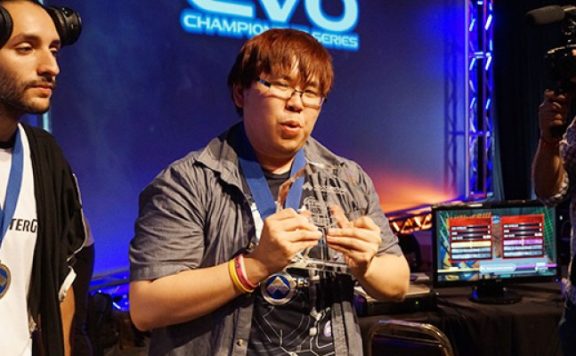