Ship Of Heroes launched it’s CCT beta-character creation test-this past week, and I was able to pop in and take a look at it. Many thanks to the folks manning the desk, as I had a bit of a hiccup concerning the donation, and they managed to not only fix it but do so within a matter of hours. If nothing else, their Customer Service has turned out to be top-notch, thanks, guys!

Honestly, I’m not comfortable with labeling this as a beta, even though having it be purely for character creation, it does fit. Why? Because the folks at Heroic Games also decided to let us run around in game, and the game itself still has some very rough edges that will need some work before I’d consider it truly beta ready. Gameplay-wise, it’s in alpha, the powers work but there’s nothing to fight-though there are some testing dummies on the roof of one of the buildings and some of the various models and animations show some real problems. 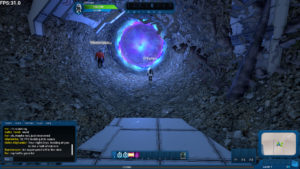 For example-this is the entry to the beta club-for a good part of the test, it was only admitting a handful of people and clogging the servers, which meant on my first attempt, I couldn’t get in.

That aside, this is a beta for the character creator, with just the added bonus of running around. Until some of it gets fixed, I can’t be certain if that really was a bonus for the studio itself, as so much was still lacking.

The character creation was, as expected, good, but still very limited, and perhaps I was expecting a bit too much from a small indie studio. There are only three base body types, two more masculine, and one feminine. I’d like to see that at least equaled out. However, and this is a big one-there are a ton of sliders to customize your hero’s build. Some of them aren’t working as of yet, and some only have a few options, but it’s a solid ground to start from. 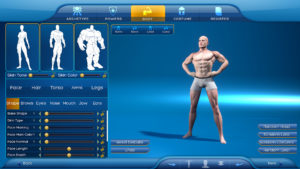 Costumes are, unfortunately, also limited in choice, as are hairstyles, but I can see where there’s a lot of room to grow into. There are the typical clipping issues, which are simple enough to be resolved, but the hair textures are a lot better than I’ve seen in a while. They’re certainly ambitious. And Shiny. 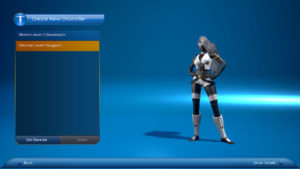 I made two different characters (both female) just to test it out-but look ma-no heels! (though she seriously needed something under that top after closer inspection….apparently it’s rather chilly out)

And, point for women, your footwear will not be limited to ridiculous heels while the boys run around in much more practical footwear, though I suspect heels are coming, given their nearly hallowed place in the comic book universe. They also didn’t have capes in that I could see unless they’re super spiffy invisible ones. 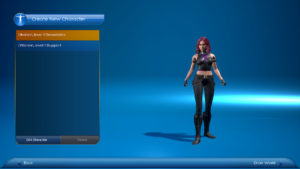 For a bit of variety. I didn’t play too extensively with the creator but I did poke around a bit here and there.

At this point, there’s still a lot of room for growth, but this is definitely more of a foundation than a finished product, it has a ways to go before it gets anywhere close to City of Heroes/Villains, but it shows a solid build that could get there with some more blood, sweat, tears and probably, a lot of cursing. 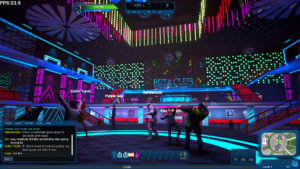 At the beta club-as you can see there still weren’t many per instance, and some of the models and textures need a bit of polishing. …it wasn’t really my kind of decor, but the people were pleasant. I’ll put up with some eye-searing brightness for decent online folks.

Is it something you should buy into now? I’d wait first, it’s already showing where some of the divides from other hero genre works might pop in, so I’d sit and see how they polish it up before you decide if you want to jump in. It’s hard to decide if a game is good when a lot of the major parts are still missing.

If, however, you have some spare cash to send to some very nice indie developers and are a fan of the superhero genre, I would jump on in. It may be a while before it comes out and it does need work, but so far the devs have been great folks, and have been trying to cultivate a great community, if mostly on the forums. 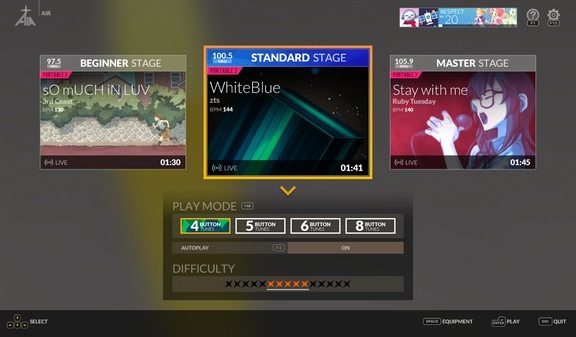