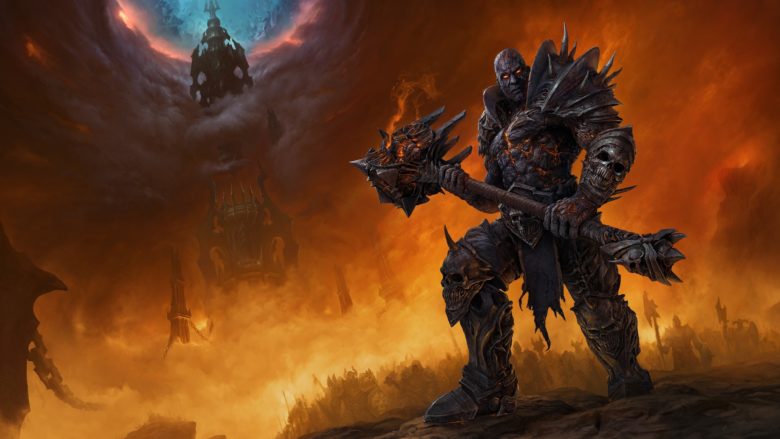 John Hight unveiled that the beta for Shadowlands will be starting next week, and Ion Hazzikostas pitched in, detailing the content that will be unfolding over summer, including but not limited to Covenant Campaigns, Castle Nathria raid testing, etc.

What the devs didn’t tell you is that some lucky players among the press got a chance to try out some of the new content on special event servers. In addition to having access to the alpha content, we were able to pledge to the Revendreth Covenant and unlock the Covenant Sanctum as well as venture into the Maw to challenge the big bad of the expansion right in the center of his domain. It is not an easy task to escape the clutches of the Jailer! 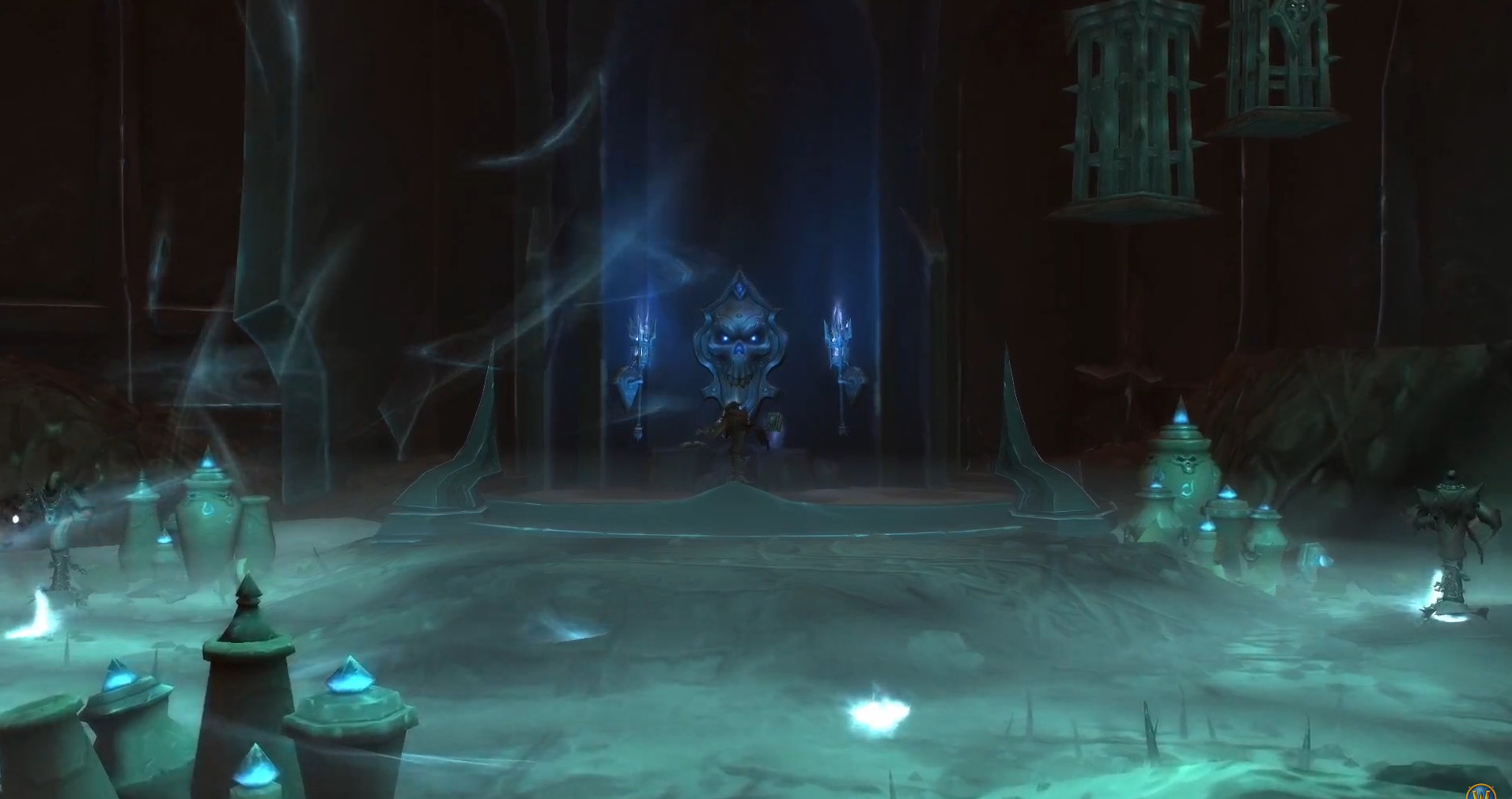 The team from Blizzard had previewed the Venthyr Covenant in April to give players a glimpse at what awaits them in gothic Revendreth.

Venthyr are in charge of treating the souls of repentant sinners, but it does not mean they are above intrigue or arrogance themselves. The Court is filled with inner tension as Prince Renathal opposes the Master – Sire Denathrius.

Once you reach level 60, you can pledge your loyalty to the Venthyr Covenant, gaining a variety of bonuses: 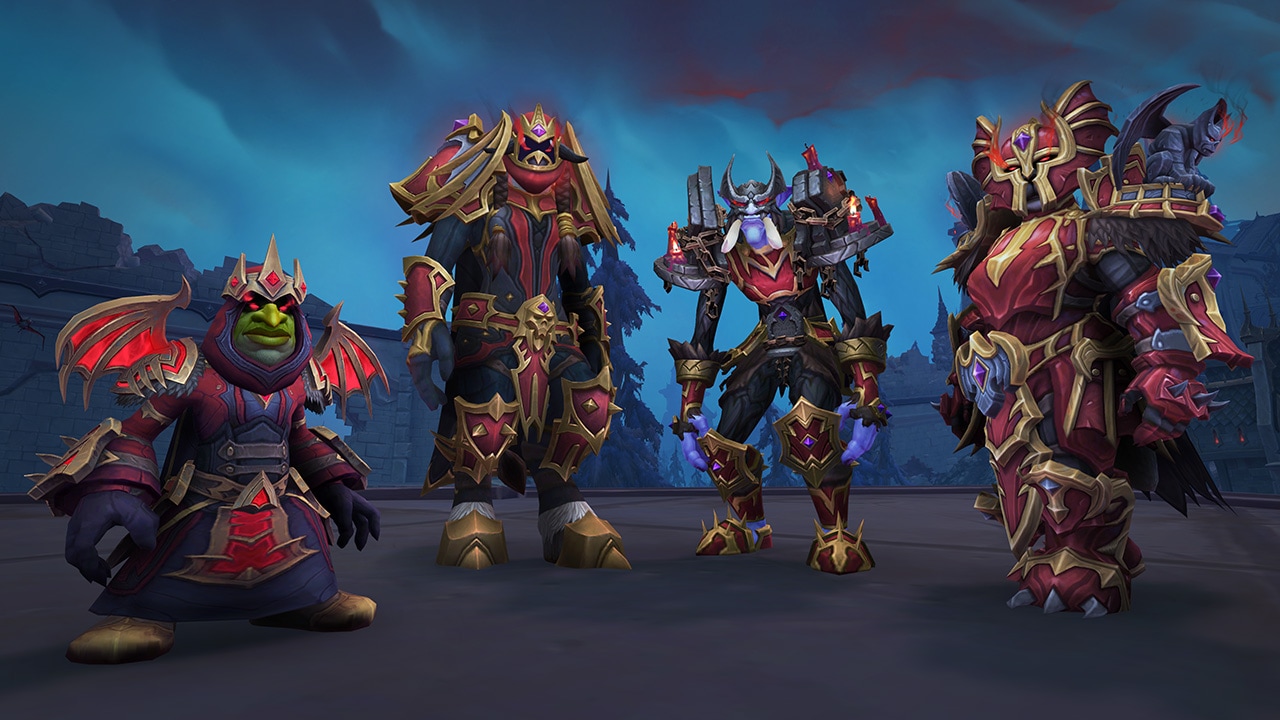 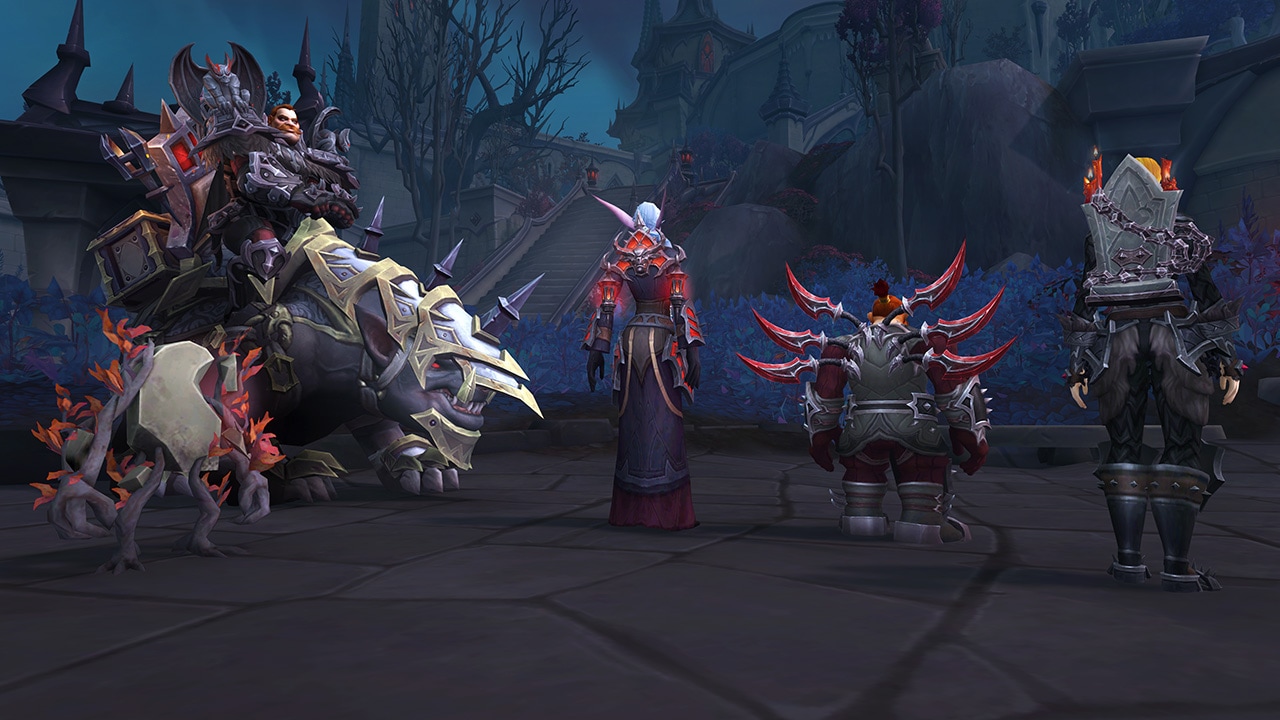 The three other Covenants – Night Fae in Ardenweald, Necrolords in Maldraxxus and Kyrians in Bastion – will have similar rewards and bonuses. Blizzard already promised extensive catch-up to ensure that new players, those who switch Covenants and those who had left the game for a time don’t fall behind too much.

That is not all, for Venthyr Covenant allows you to throw a party! You get to hold the Ember Court, visited by the coolest Venthyr NPCs around. It is up to you to care for your guests’ needs – clean up around the court if they prefer the cleanliness, deliver tea for those seeking formalities and brawl with attendants if your guests prefer a rowdy evening.

The final mood of your guests decides the score and thus the reward you get.

Additionally, you can also upgrade your court with Dredger Pool, Guardhouse, decorations, extra staff, buildings, more guests and so on. Honestly, how can other Covenants beat Revendreth?! 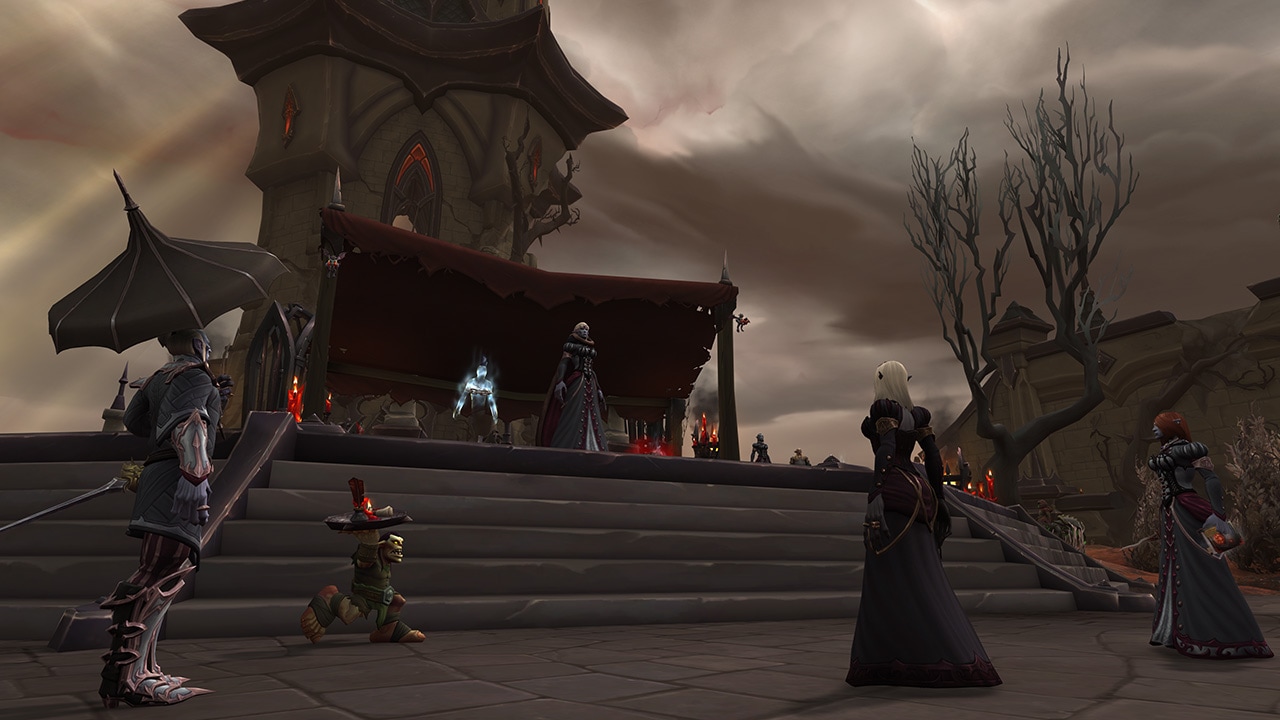 The event realm allowed participants to go through the quest chain to access the Maw and the tower at its center, Torghast. Admittedly, the quest chain was lengthy but not exciting, with a lot of back-and-forth and repetitive actions and going through the horrible worm holes that connect the four Covenants and Oribos.

During the Developer Update, Ion Hazzikostas described the Maw as “sandbox content inspired by Timeless Isle and Mechagon”. To me, it felt more like a greyed-out Tanaan or Argus, filled with densely packed mobs and plenty of events in some places and empty swaths of land in others. Both Mechagon and Timeless Isle had a slighty crazy and by design colorful surroundings while the Maw and Argus are close in theme being intentionally bleak and unwelcoming. Logically, the Maw is an oppressive wasteland: in the beginning, you cannot even mount up in the zone. You can buy a few upgrades with one of the Maw’s currencies, with one having something to do with “comfort of travel” so maybe it will change in the future. Or could it be by design and we’re to spend the next two years in the Maw on foot? Stay tuned to find out.

Obviously, things are going to change and be expanded upon from alpha to beta to live version of the game, but as of this moment, the Maw leaves much to be desired.

Ve’nari is a mysterious broker who lives among the shadows and, through unknown means, has managed to survive. For a long time. She is the closest thing you’ll find to a friendly face in this realm. 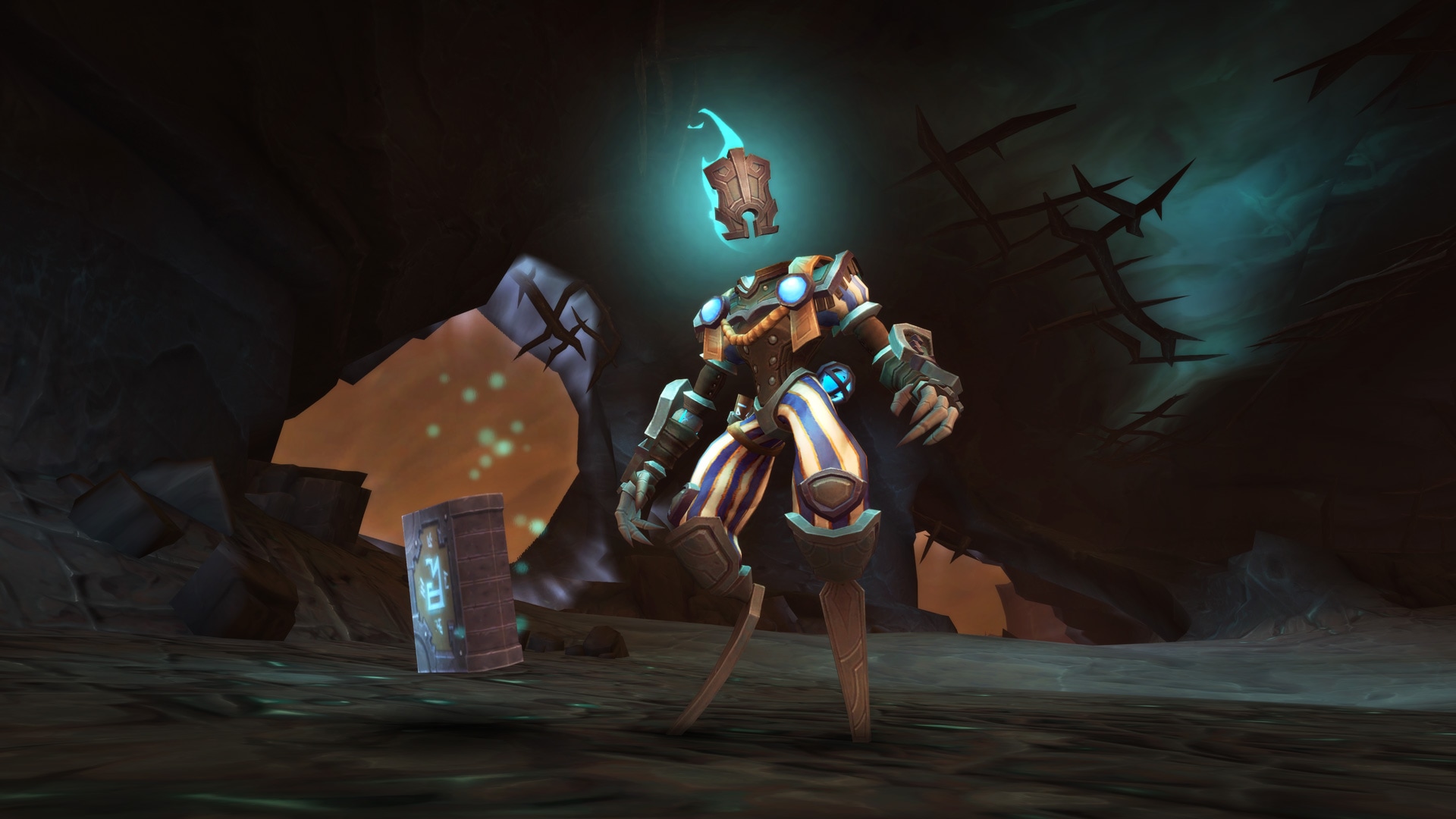 Shortly after your first arrival in the Maw and saving Baine, you will get a word from Bolvar Fordragon that he can feel the presence of Azeroth’s adventurers in the Jailer’s holdout, Torghast. According to the datamining, those stuck in the Maw include Jaina Proudmoore, Thrall and Anduin Wrynn, with the possibility of Night Warrior Tyrande also being there.

As it currently happens on the event realm, you will have to do half a dozen Torghast runs back to back on Bolvar’s call. The introductory quest runs created to familiarize you with the tower only take you to the Floor 6 so each run does not take too much time. However, when you have to run a number of them in row, it gets quite repetitive even if it gets its job done by introducing you to the main mechanics of the place – Anima powers, traps, freeing souls, etc.

I fully expect the quest chain to free the “architects of peace in Azeroth” to be spread through a greater period, perhaps taking you to Torghast every three days or weekly.

Sadly, at this point I had to wrap up my playtime so I did not get to try out the Theater of Pain dungeon. 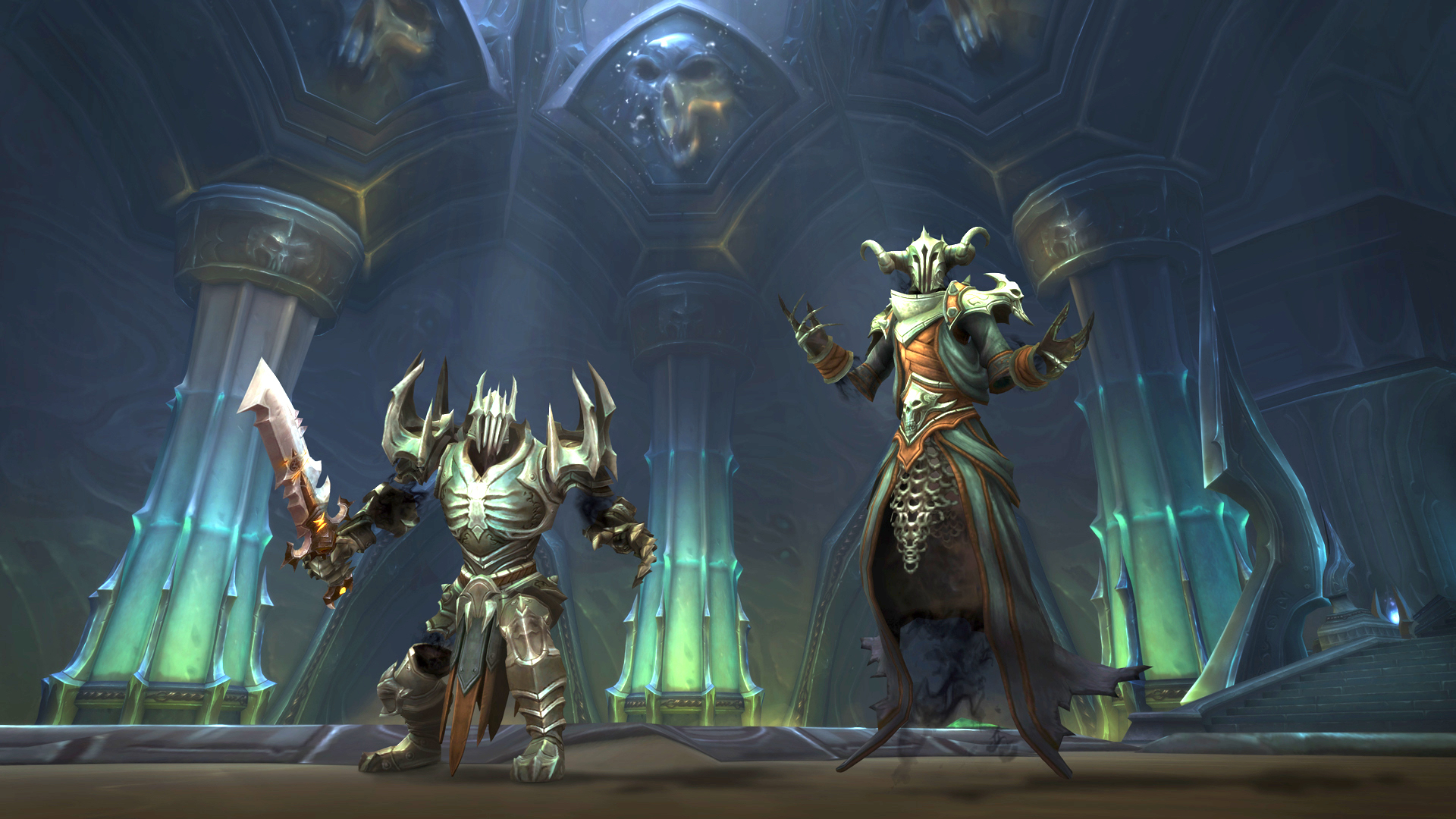 For the purposes of checking out Revendreth Covenant and the Maw, I created and played a Marksmanship Hunter. It has been a while since I last played WoW and admittedly I am a little (a lot) rusty. But a few hours I spent in the game allowed me to draw my conclusions about the state of the spec – and the class.

Typically, I play archers in every game I can with a single exception of Dragon Age where all my characters are Mages. The archetype of a bow or gun user is my jam. Throw a pet in the mix, and I am a happy gamer. This is why I find it even more disheartening that Blizzard seems to be un-enthusiastic or uncaring about their own single archer class in the game, or to be precise the two specs that use three unique weapon types.

It shows in a variety of ways: three months of total silence on the alpha community feedback (not to mention the Legion and the BfA feedback going unanswered), lackluster animations, a destruction of a long-time beloved Ranged spec and overall meager presence of the class in lore.

Sure, there are plenty of big name NPCs wielding bows and even whole organizations of archers – Sylvanas, Alleria, Shandriss, Tyrande (in BfA where she rerolled melee), Blood Elven Farstriders, Night Elven Sentinels,  Silver Covenant’s Spellbows, Suramar’s arcane archers, Forsaken Dark Rangers and so forth. But none of them are actually Hunters like the player character. The best-known WoW Hunter is mok-nathal Rexxar, who keeps flopping between Survival and BM in a variety of Warcraft-related games. But who is the most frequently appearing Hunter, using bows or guns? Raking my brain, I could only think of Hemet Nesingwary. Now compare that to Thrall, Gul’dan, Tirion/Uther, Illidan, Arthas, Malfurion, etc.

While minuscule on its own, these things tend to stack and leave a sour impression when you sum it all together. 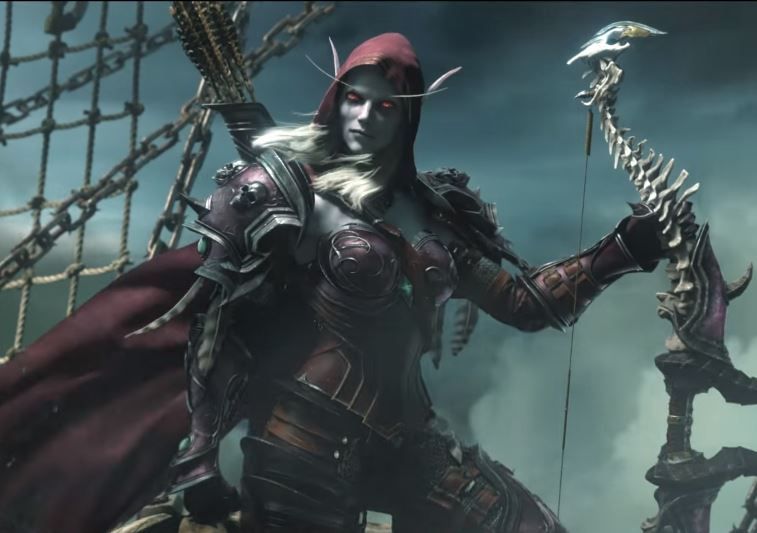 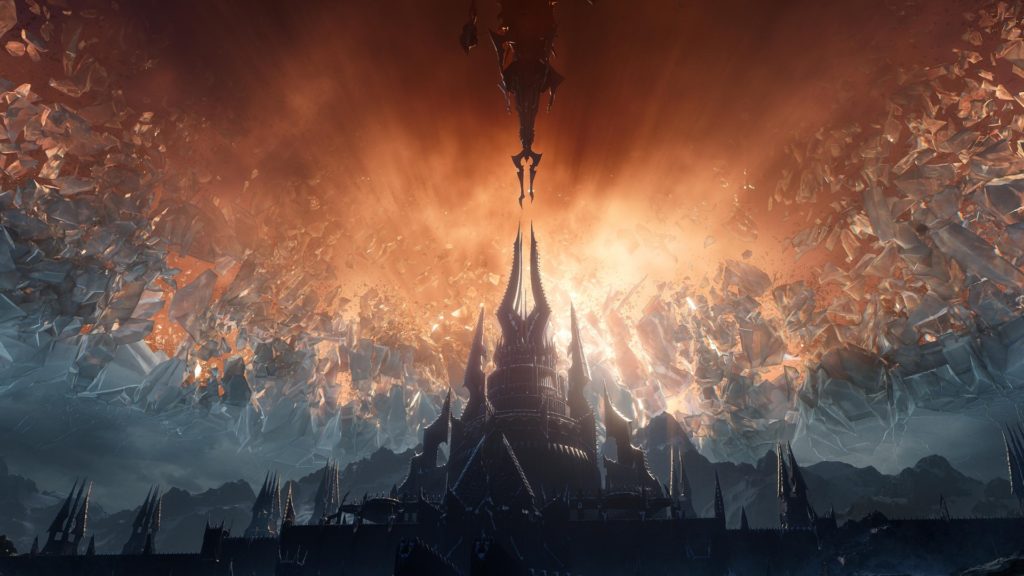 Playing the alpha event left me with mixed feelings. On the one hand, the leveling experience via questing, the world-building in the new zones, new races, characters, etc. – all of that is simply amazing. Every time I think Blizzard can’t do better than, say, Zandalar in BfA, they prove me wrong. Revendreth is an amazing location with deep characters that make you fall in love with them immediately – as long you can take some dry humor.

On the other hand, the alpha has a number of issues.

First and foremost is the class design. I know that it is not even close to being finished yet, being alpha and all, but there are specs that feel awkward or plain not fun, chief among them Shadow Priest. My personal opinion is that the very core of any given specialization – the basic abilities you have without even having to choose talents – should be smooth and enjoyable, further expanded upon by talents, gear sets, trinkets, stats and so forth.

Since Legion Blizzard adopted the approach of rented power-ups – Artifacts, Heart of Azeroth with their connected features such as Netherlight Crucible, Azerite Gear, etc. Shadowlands takes a step closer to “classic” design with the unprunning, but players still receive their temporary power-ups via Covenants, Soulbinds, Conduits, etc.

It feels like those power-ups are being stuffed in the holes of the basic class design and when it is time to leave them behind and move on, the bare bones show. 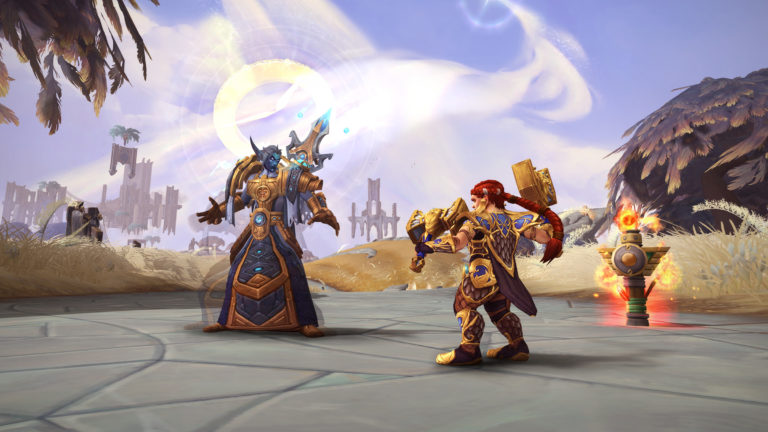 Many players were overwhelmed with the number of systems in Battle for Azeroth, and it seems Shadowlands plans on outdoing its predecessor both in quality and quantity. In your very Covenant, you will have to deal with the Sanctum, its Anima Network, Adventures aka Table Missions, the Renown Grind, Maw grind locked behind time-gate, leveling up Soulbinds and buffing it with random spec-specific Conduits, gathering materials for your legendary in Torghast, doing your special Covenant feature (Ember Court for Revendreth) and more.

That is without mentioning the features that will be carried over from previous expansions such as PvP Honor/Conquest farm, reputations and Paragon boxes, Mythic+, crafting.

Throughout Battle for Azeroth, I couldn’t shake off the feeling that the Warcraft team wanted to leave behind the legacy of previous developers and bring forth something new, something unique, something their own. Just look how quickly the murderhobos of Azeroth went through epic villains years in the making!

Faction War, Azshara, N’zoth, all stuffed into a single expansion with each being given a thematic patch, meanwhile Deathwing (an Old God minion himself!) took an entire expansion on his own.

Shadowlands is a yet unseen part of the universe greater than Azeroth, with the team being free in their artistic vision and future story hooks. We still get plenty of recognizable characters, of course, such as Jaina, Bolvar, Thrall and others, but the game also actively creates the place for new characters, new places and new stories.

With BfA being a glorified intro to Shadowlands, it feels like entirely too much is riding on Sylvanas and her mysterious plan. Too much can go wrong too easily with the playerbase still tense after BfA.

I also have my concerns with the state of the Horde after losing almost every major face – starting with Cairne and going through Garrosh, Vol’jin, Sylvanas, Nathanos, Gallywix and Saurfang for large players – and a number of less important characters. Especially with Alliance-leaning pseudo-neutral characters like Calia Menethil and Valeera Sanguinar being featured alongside the weak Horde roster.

Written by
Catherine Daro
While growing up in the wilds of Russia, Catherine learned to talk, write and game at almost the same time. You can follow her attempts at latter two at MMORPG.com and GameSpace.
Previous ArticleWoW Shadowlands – Hunters & Horde & Hairstyles…OH MY!Next ArticleThronebreaker: The Witcher Tales Launches on iOS 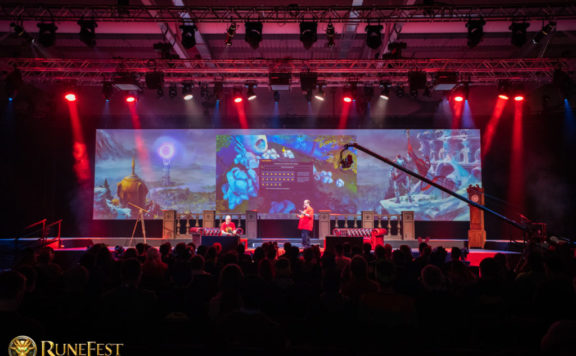 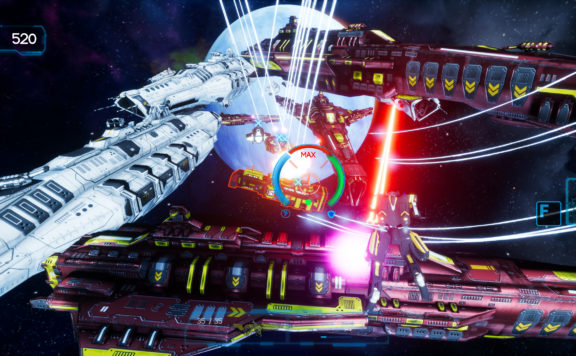