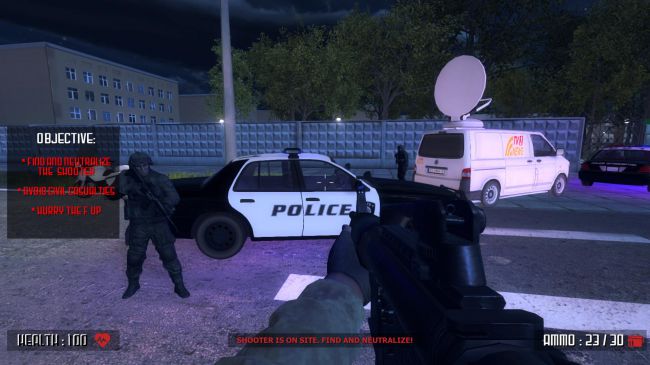 In a move of poor taste that outshines the most trolly of troll moves, Revived Games launched a game on Steam called ‘Active Shooter’ which allowed players to simulate being a murderous, gun-toting, madman shooting up schools, police, and more.  I’m not really sure how Active Shooter ended up on Steam but it was recently removed by Valve and the developer banned.  Valve states that the man behind the development company “Revived Games” is a troll with a history of abuse.

“This developer and publisher is, in fact, a person calling himself Ata Berdiyev, who had previously been removed last fall when he was operating as ‘[bc]Interactive’ and ‘Elusive Team’,” a Valve rep explained.

“Ata is a troll, with a history of customer abuse, publishing copyrighted material, and user review manipulation. His subsequent return under new business names was a fact that came to light as we investigated the controversy around his upcoming title. We are not going to do business with people who act like this towards our customers or Valve.”

In addition to developer Revived Games being banned, the publisher of the title, Acid’ is banned from the Steam platform as well.  What remains to be seen is if any steps will be taken by Steam to prevent this kind of public troll game to come to light to begin with.

Written by
Robert Baddeley
Robert is a full-time Respiratory Therapist with the U.S. Army but that doesn't stop him from doing what he truly loves: playing and reviewing games and staying up to date on the latest and greatest PC hardware. He also streams part time on Twitch when he works nights (www.twitch.tv/waffleflopper) and writes for MMORPG.com.
Previous ArticlePartnership With TeacherGaming Brings Cities: Skylines to the Educational MarketNext ArticleLEGO DC Super-Villains Official Trailer And Release Date!