Have you ever viewed a Hieronymus Bosch painting and thought “Whoa! That’s messed. Gimme!” It was wrapped in that very cloak of dark enthusiastic joy that I found myself launching the completed “Agony”. Only to laugh and to laugh hard at the very first screen. Agony certainly wasn’t messing around! Curious? Like Dante with Virgil, please join me on a tour of Hell. In video game form. This is my Gamespace review of “Agony.”

In the interest of transparency, I should mention that I backed “Agony” on Kickstarter. How could I not?

Whether it was the stories I heard when I was a young, my first experiences with “Doom” or any number of related movies or TV shows I probably shouldn’t have been watching as a boy (looking at you “Blood on Satan’s Claw”), I have always been fascinated with the place. Not that I really wanted to visit. But in the comfort of my own home, I could bravely imagine myself traipsing through fire infused landscapes, breathing atmospheres of benzine and horror, and finally looking into the abyss to see if it would actually look back.

And there I was, with a video game that promised to depict the terror that was Hell. 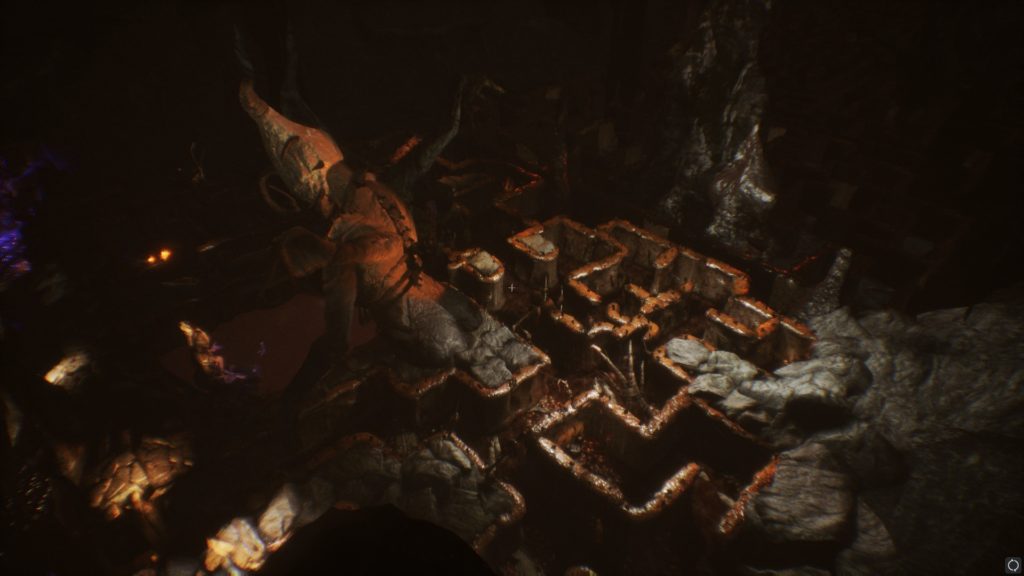 So back to the laughter. When I started the game for the first time there was a screen warning me that the game had flashing images that could prove problematic if I suffered from seizures or epilepsy. Except the screen was flashing and sputtering something fierce! At first, I thought “Whoa Agony! You took the Hell thing too far you cheeky monkey!” I then realized something was wrong.

It seems there is a bug that causes a graphical glitch when the game is in “Full Screen” mode. Not everyone experiences this issue. The fix? Set the game in “Full Window.” It immediately solved the problem.

I then looked at my choices. There was Story mode and Agony mode and (as I discovered while writing this review) Succubus mode. Agony mode is a multiplayer experience where you are given a procedurally generated map and you must survive as long as you can. There are rankings, so you can compare yourself to other players.

As I mentioned, there is “Succubus Mode.” Damned if I know. The game doesn’t let on. But I had no interest in these modes as I wanted to go directly to Hell!

For difficulty, you are given Easy and Normal as well as Custom. Custom allows you to turn off such things as “Destiny Lines” that show you to your next checkpoint or make it so your checkpoints (creepy mirrors) are destroyed after the first death. I picked normal and was then brought to the gamma screen. Agony is a very dark game. I mean that literally, it’s dark. Don’t worry about setting your gamma correctly the first time as you will have to revisit that screen multiple times (five for me). When the game starts you get a nice cutscene beautifully rendered, but I suspect the voice-over text could have used another rewrite and at one point they changed the voice-over but didn’t change the text. Small nitpick, but there it is. 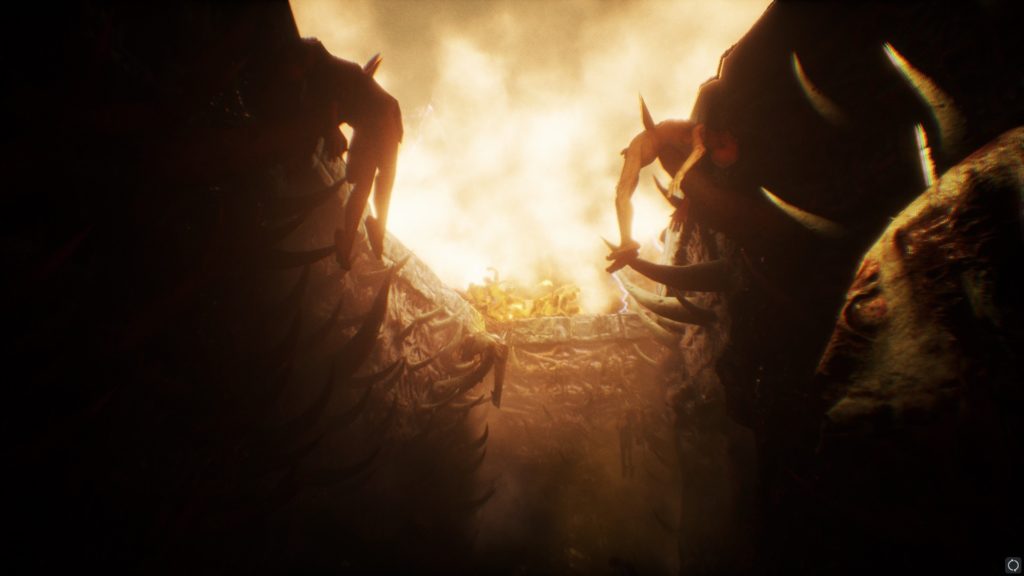 Also, and I’ll spoil it because the game doesn’t seem to care, you are told the Red Goddess is the answer! I hadn’t even officially stepped foot into Hell and I already had the answer! Clearly, I was moving up in the world. Er, “down!” In truth, it would have been nicer to discover this while playing the game. But “whatever,” onward and downward.

As you play you will get tutorial hints along the way. While they are helpful, you might miss the hint that you can put points into your character to make it better. You must hit escape and then go to the skills menu. You are then given the choice to make your character a little quieter or make it so that you can hold your breath longer. There are not a lot of choices, but in theory, these are a big deal.

The game wants to be a “survival horror” game. Ok, “whatever”. I believe they are trying to channel “Alien Isolation” in that you want to do whatever it takes so you aren’t noticed. Like holding your breath. The problem with Agony’s system is that, at least at the start, it’s useless.

Here’s how it played out for me:

“Oh no! A demon and it’s 15 feet away. I’ll crouch and hold my breath. Holding … holding … HOLDING! I’m out of breath and its butt is in my face. Now it’s ripping me apart.” End Scene.

When you “die” or “re-die”, you become a spirit. You then need to find a body or demon to possess. If you fail and time runs out, the Red Goddess scolds you and then “gives you a drink and sends you to bed.” More precisely, she playfully scolds you and you restart at your last checkpoint.

This spirit mode is very problematic. Everything goes “more dark” and you suddenly can’t see a thing. You then float, disoriented, and control is difficult. At one point I was walking against a wall and didn’t realize it. Look for a glow that indicates a body you can inhabit. There is spirit vision but damned if I know what it does as nothing happened when I used it. What? Not hard enough for you? Heck, toward the end of your timer the game throws bloody sigils in your face so you REALLY can’t see a thing. I think it’s supposed to indicate a countdown, but it only impedes you when you are at your most desperate. But what were you expecting? This is Spart_, I mean Hell! Man up Nancy boy you have pits you need to fall into! And don’t slouch.

There is a feature for hiding. You will find these nooks here and there. You can duck into them to lose a chasing Demon. I also learned when testing this that Demons can die when they blithely walking over a fire. There I was, hiding, and I saw the demon walk through a fire and it died. Maybe they come back though I suppose if you’re dusted you shouldn’t ever come back. Must have rules. 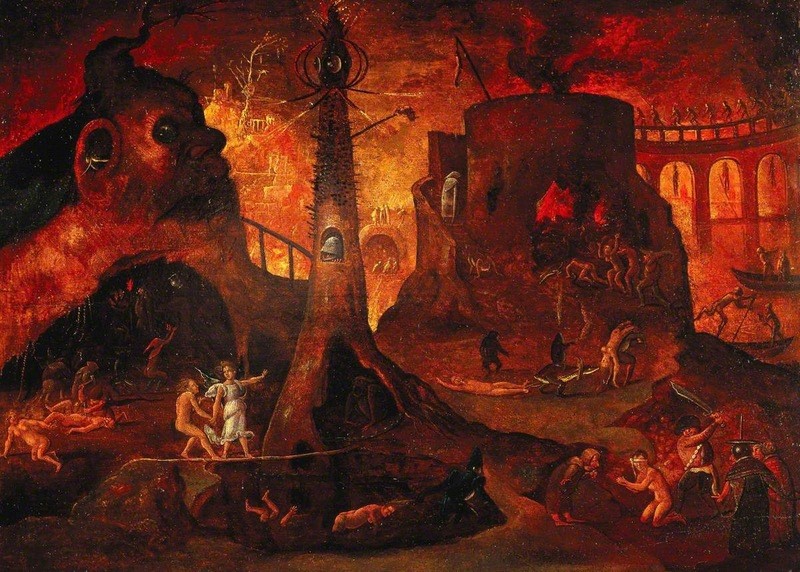 Let’s talk about fire. The game wants you to balance whether you walk in the dark or whether you use a torch but risk luring any demons in the area. I can’t tell you how many times I walked off a path because I didn’t have a torch. Fire isn’t bad! It’s good! Except when there are demons about. But carrying the torch can be annoying. Every time you turn slightly it moves a bit too far in front of your face. Very distracting.

As far as the “world” of Agony, it’s filled with “demons and bodies and blood, Oh my!” The art design is one of the game’s strongest points. This game is set in a horrid, horrible place. I came across a sort of “vignette” where a man was building a wall while talking to you. His use of an alternative mortar is going to be disturbing to some people.

There are bodies and limbs and the sound design is simply wonderful with screams and shrieks and weird for the sake of weird. It’s definitely a labor of love for the designers. It’s Hieronymus Bosch but turned up to Eleven. But some will find it very self-indulgent and the incessant use of blood, guts, bones, and “weird” will turn some people off. And that’s the thing, you must be “all in” for this game experience because in the end, that’s really Agony’s strong point. It’s the art design and the “experience”.

There are puzzles but they’re “ok.” I like the “study the painting” puzzles to help you move on through the game world (you’ll see) but for the most part, they’re going to be lost on some people. The sigil puzzles could have been better. Perhaps they could have taken a page from “Hellblade: Senua’s Sacrifice.” Some NPC’s will give you information and sometimes you will hear a tortured soul repeating a phrase, only to engage them in conversation and hear the same text. A bit disappointing as some of what they initially say is creepy and interesting

Tags: agony, pc, review
Summary
If you are predisposed toward the infernal if you enjoy the gory and the journey this game might be for you. If you are looking for solid gameplay and perpetual darkness is an issue, then you will see more devils than this vast hell can hold. Note: Our copy was reviewed on PC with a code provided by the reviewer. IE - he backed it. COMPARE TO: Sort of like Alien Isolation but not as rich or polished. Or maybe Amnesia where you make your way through space, learn some lore, some story and try not to get killed in the process.
Good
Bad
6.5
Fair 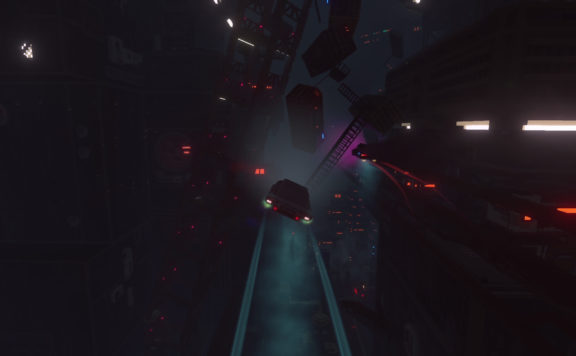 Have you ever viewed a Hieronymus Bosch painting and thought “Whoa! That’s messed. Gimme!” It was wrapped in that very cloak of dark enthusiastic joy that I found myself launching the completed “Agony”. Only to laugh and to laugh hard at th...
0
Average User Rating
0 votes
Have Your Say!
Your Rating: 0
Submit
Write A Review