Ubisoft Quebec’s Assassin’s Creed: Odyssey certainly lives up the title. The journey that this installment takes you through is an outstanding evolution of more than a decade of storytelling and game creation that continues the odd dichotomy of progressing the “present day” Assassin versus Templar conflict by reaching further and further into the past. This visually beautiful, immersive game steps confidently and aptly further into the role-playing genre and allows the player to experience ancient Greece and the Peloponnesian War as a mercenary who’s loyalty can alter depending on the proffered rewards. Welcome to your Odyssey, and may you choose profitably.

Consulting with Ubisoft’s Montreal studio and making use of AC Origin’s fine-tuning bet365 sign up offer and changes, they have gone a step further into the RPG experience than previous games of this series. Giving the player world affecting choices and interactions adds a whole new element to the game. Even choosing when and how you want to participate in the overall war effort and which side you fight for is pretty much up to you (aside from a few story-required situations). Aside from the main story missions, side missions are varied, both in what they require, whether it is for one of the conflicting nations, and whether or not it suits you to take it. 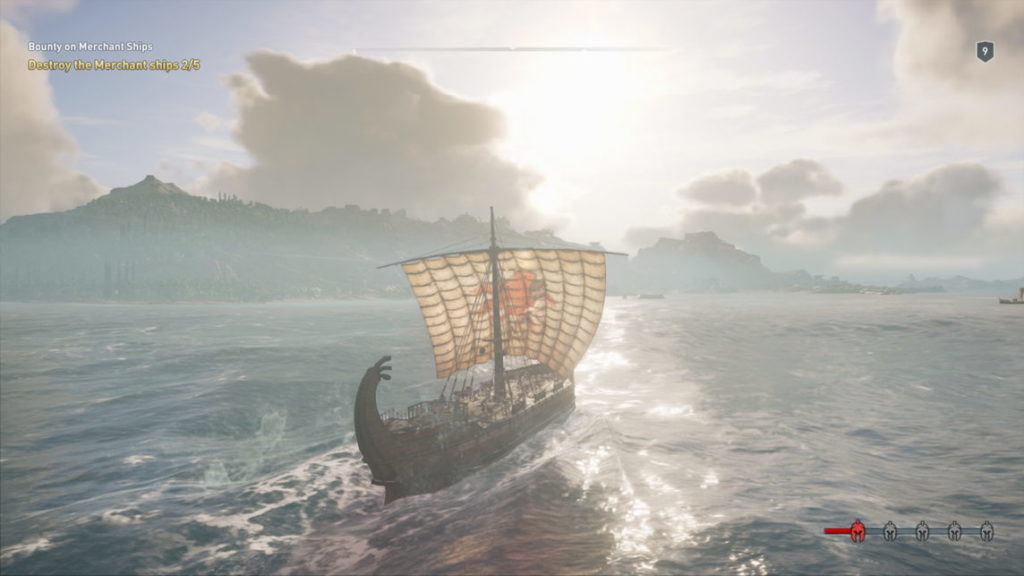 Your first choice of the game is that of which of the two siblings you want to play as. Choosing either Alexios or Kassandra doesn’t change the game much, it’s more of a personal preference. Even when approaching romance, gender has no bearing on your attraction value. However, what did make a significant difference in my mind was the voice actors’ interpretations. While the words and events are the same, like all good actors, they are able to bring two entirely different perspectives to the game just with the nuances of their voices.

The choices, in general, go a long way to promote a feeling of freedom in this game world, as does the return of the open sea. Bringing back the aspect of commanding your own vessel, going where you want to go, fighting battles you want to fight, is the ultimate embodiment of freedom (I feel like there could be a Captain Sparrow quote in there); and with it comes a healthy assortment of aesthetic choices for your ship and your crew to further personalize its feel. Not to mention that you can begin recruiting your own choice crewmates from those whom you have worked with, for, or against as you traverse the world.

Gameplay is quite fun and challenging, and if you’re familiar with how Origins played, you’ll be pretty set to jump right in with only minor changes or differences to take into account. Even if you’re not, I found the controls streamlined from previous AC games and much more intuitive. I had a lot fewer instances of approaching a contextual point that went awry than in other of the titles. It’s always nice when you find yourself running at a wall with the intention to climb it, to not inexplicably vault backwards off of it right onto the waiting weapons of your pursuers. 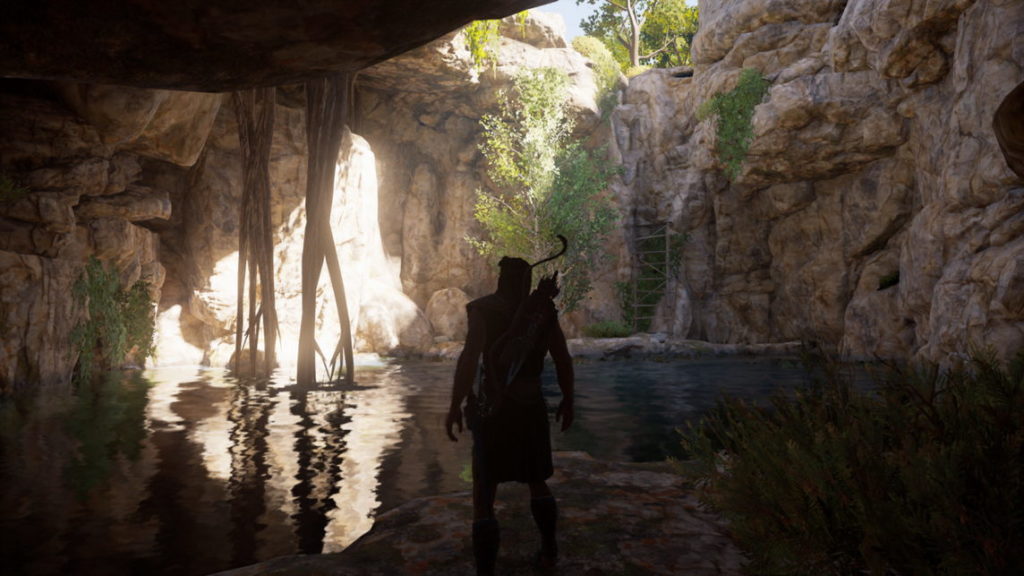 Weapon choices are quite varied, both aesthetically and functionally, as is the way you choose to approach combat with those very weapons. Armor is also varied, both in appearance and heftiness. A really nice aspect is that if you find a specific weapon or armor that you want to keep, you can have it upgraded as you go to match your level. I personally didn’t encounter any situations that allowed you to upgrade the quality of the weapon, so if you’re gonna pick one, make sure it’s of high quality.

Dual wielding will only allow you to use one single-handed weapon of your choice, however, as the off-hand weapon will always be your iconic spear. Don’t worry, the spear kicks ass. And yes, you can still assassinate, quietly if you so choose, with a large weapon equipped. Your characters preferred tool for assassinations will always be their favorite spear.

The story and plot are fantastic, aside from a few overly long, unskippable cinematic sequences (some flashbacks would happen in the middle of a conversation and would be so long I’d forget what the conversation was about). With the fact that it takes place within the backdrop of the Peloponnesian War, I found a lot of options opened up as far as skill and story progression goes. There are different story arcs that converge on each other (in fact, they seem to catalyze and propel one another), and for the most part, you may pursue one (at least as far as I have played) without having to further the other. Not to mention that there are a good number of daily missions that pop up on the job boards that you can spend hours doing without even approaching story-based missions. Of course, exploration alone can occupy quite a bit of time, and doing that will also reveal other side missions that need doing. The real limitation that I see in the idea of going wherever you want is the area’s NPC levels. I wouldn’t call that a problem, however, as there is so much to do and explore that you’ll get there soon enough.

Then, of course, there is the abundance of the “go deliver”, or “go kill” types, which wouldn’t have warranted a mention except that the mission givers often give you these really interesting reasons as to why it needs to be done… which makes it incredibly disappointing to complete the task and get the standard, “Hey, thanks! On your way now, nothing to see here.” ending for so many of them. There are a few that have a fittingly amusing denouement, such as the elderly lady who wants ingredients for a potion to make her husband more virile, but all too many do not fulfill their potential. Personally, I found myself wishing for a little more follow-through, I actually wanted to know what became of the situations and people involved. Now, it is well within the possibility that some of them could possibly affect things later, so I won’t give up all hope. 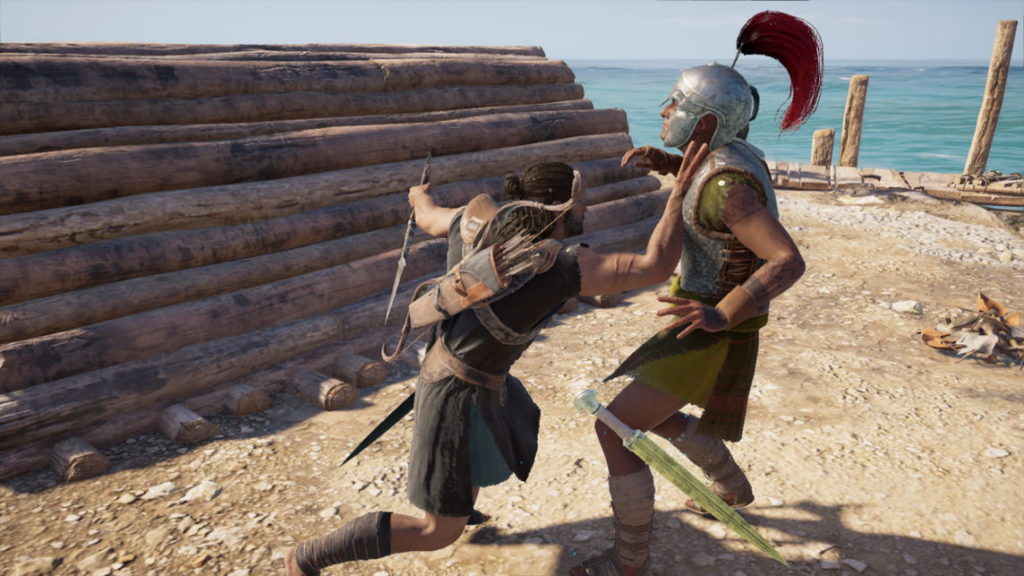 While you have the option of refusing most side missions or jobs on the board, keep in mind that some are time sensitive. Whether because they will only be available for a limited time, or just that you will have a limited time to accomplish them, be aware and act accordingly. Some of these time-sensitive missions show up on your map with an hourglass, fittingly enough. So if you’re looking for a little extra funding, go check them out. You can always refuse to take the job if it offends your sensibilities. As a proper mercenary, I tend to want to take ALL the jobs, despite whether or not they conflict with my current goals and agenda. Drachmae is drachmae, after all. Keep in mind that completing certain jobs for one side of the war effort or another can affect the power balance in that area. So, if you’ve chosen a side, be sure not to inadvertently lead the other side to victory just because they offered you a bit more drachmae. As mentioned above, I like to avoid choosing a side at all. Hell, keep the war going forever. More drachmae for me.

Note: Our copy was reviewed on (Xbox One) with a code provided by PR.

Tags: Assassin's Creed: Odyssey, ps4, review
Summary
To wrap it all up, I am very much enchanted by this game. It is not without its flaws, for certain, but I didn't find any that broke the game or my appreciation and excitement for it. I feel that the step that Ubisoft Quebec took to make this experience more immersive and personal for gamers was a strong move, and they did it with style and a competence that greatly benefits the game as a whole. If these are the kind of evolutions we have to look forward to in the future, I eagerly await the next releases from them. Until then, go forth and let the drachmae roll in.
Good
Bad
9
Amazing

Write your own epic odyssey and become a legendary Spartan hero. Forge your destiny in a world on the brink of tearing itself apart. Influence how history unfolds in an ever-changing world shaped by your choices.
7.7
Average User Rating
9 votes
Have Your Say!
Your Rating: 0
Submit
Write A Review
Genre:action-adventure
Rating:Mature
Developed By:Ubisoft
Publisher:Ubisoft
Modes:Single-player
Series:Assassin's Creed
Engine:AnvilNext