I’ve never seen or read Attack on Titan, nor did I play the first game. But I always loved the gist of the story – massive people-eating giants attack humanity, and so humanity crafts three enormous walls to hide behind. When the Titans break through one, all hell breaks loose, and a new way to fight the giants is needed. Attack on Titan 2 roughly follows the story of Season 2 of the show, though you play a character with his or her own story to tell, alongside the main characters of the first season like Eren. Omega Force games always feel rather hit or miss, and I’m happy to report that aside from technical issues, Attack on Titan 2 is a really fun Action RPG romp with plenty of replay value.

After spending a good 20 hours with AoT2, I’m convinced I need to read the manga or watch the show. It’s pure adrenaline-pumping action, but also manages to be a really heartfelt story about finding your purpose in life, surviving in a world that seems stacked against you, and relying on your friends to get through it all. While the narrative in the game takes a while to get going, once it gets its hooks in you, it won’t let go through the couple dozen hours the main game takes to play through. 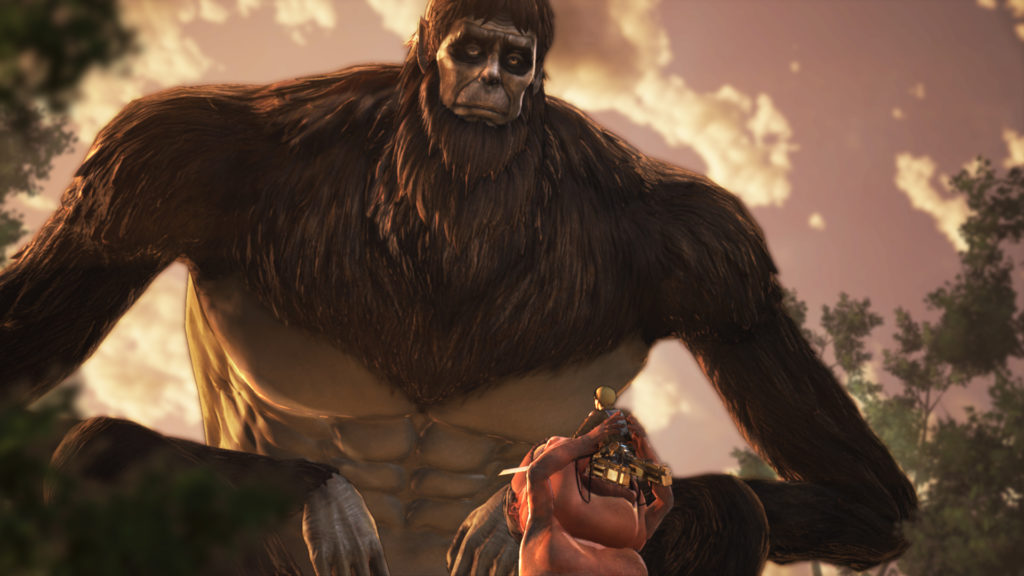 The big improvement over Attack on Titan 1, from what I’m told, is the revamped ODM system – basically waist-strapped grappling hooks and gas jets that let you fly all over the map, hooking onto everything, like Spider-Man. But your arms are free to dual-wield massive blades that cut down the TItans limb by limb, or slice their neck open in gory fashion.

It’s worth noting that Attack on Titan 2’s giants are all naked, creepy, and flat in front like Ken. My son watched me play a bit, and kept laughing because their behinds are just as weird as their awkward grinning giant faces. I was worried he’d be afraid, but they’re not scary, and they’re not intimidating… the power the ODM gives you makes it so you really do feel like you can take them on easily. Later stages of the game and special variations of the Titans mean things get more difficult, but Attack on Titan 2 does a great job of making you, a fly compared to these massive beings, feel really powerful.

Blood and gore can be turned off, which also makes the game feel a bit more kid-friendly, for those who are worried. 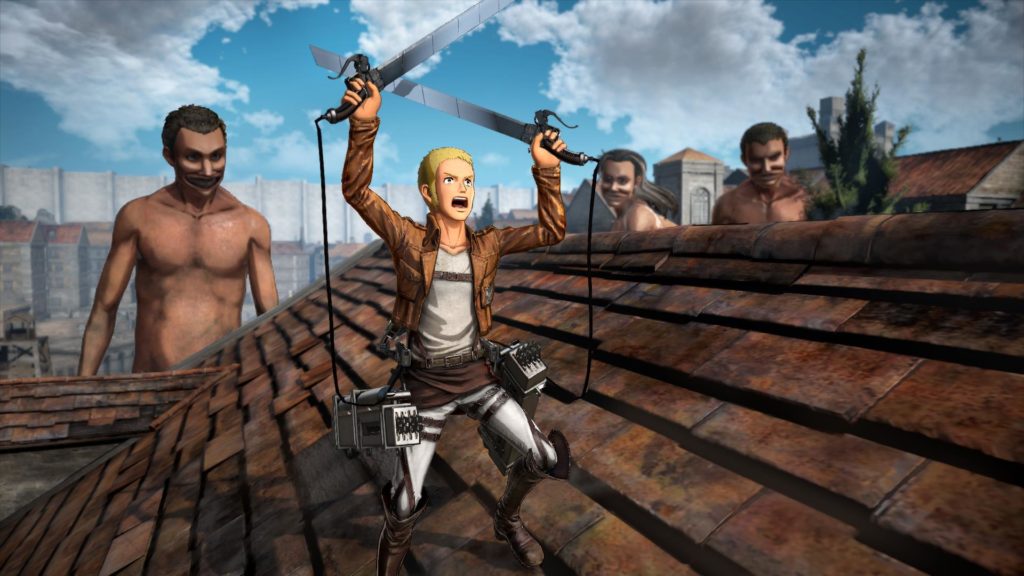 There’s a good deal of RPG in this action adventure too – your created character, oddly referred to as “Our Man” even if you make a woman, can upgrade their skills, add special talents, craft new gear, and more. It’s really a nice way to add a deeper layer of customization to a game that could have easily just let you play as main characters Eren or Mikasa. You unlock more characters as you go, and can play special modes aside from the main story too.

The camera can get caught on buildings, but it does a pretty excellent job of keeping up with you as you fly all over the map, too. What’s more troubling on the Switch is that on the more crowded levels, the action can get really slowed down in terms of FPS drops, especially in handheld mode. It’s not too troubling, but it’s noticeable and somewhat frustrating.

And while I know many prefer the original Japanese voices in games like this, I can’t help wanting an English cast, because of how good the story gets the deeper you go. Of course, that means it would need to be an excellent cast to avoid feeling awkward and that’s not always easy either. 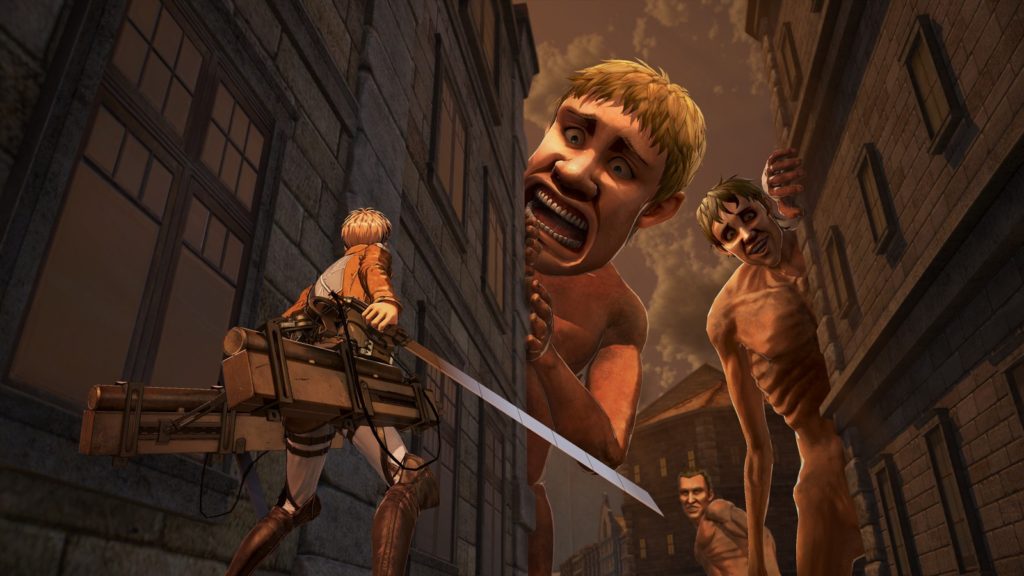 Attack on Titan 2 is still a great deal of fun, despite a slow start and some wonky performance on the Switch. In a time where every week seems to have a great game, it might be easy to skip this one as just another Koei Tecmo anime release, but you’d be doing yourself a disservice. Attack on Titan 2 is a very unique action game, with a great story, great controls, and fun as hell combat. Recommended. 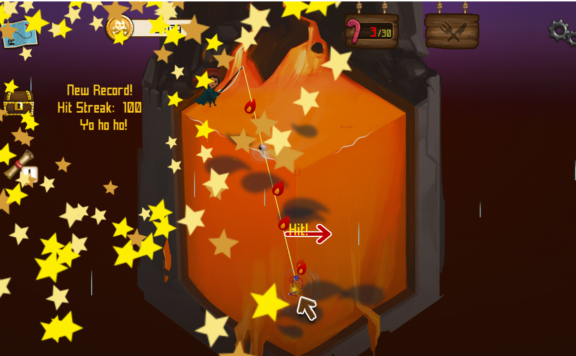 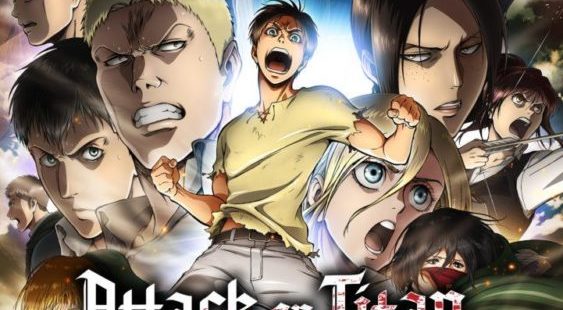 Attack on Titan 2 is the second game in the ongoing series developed by Omega Force and published by Koei Tecmo. The game follows the first two seasons of the Japanese anime and features well-known series characters. Players will find several game modes including Story Mode, 'Another' Mode, Inferno Mode, and cooperative Online Mode. The latter allows two teams of four to compete against one another to eliminate Titans or capture bases or competing to score the most points based on executions.
0
Average User Rating
0 votes
Have Your Say!
Your Rating: 0
Submit
Write A Review
Genre:action-adventure
Rating:Mature
Developed By:Omega Force
Publisher:Koei Tecmo
Modes:Online Multiplayer, Single-player
Series:Attack on Titan