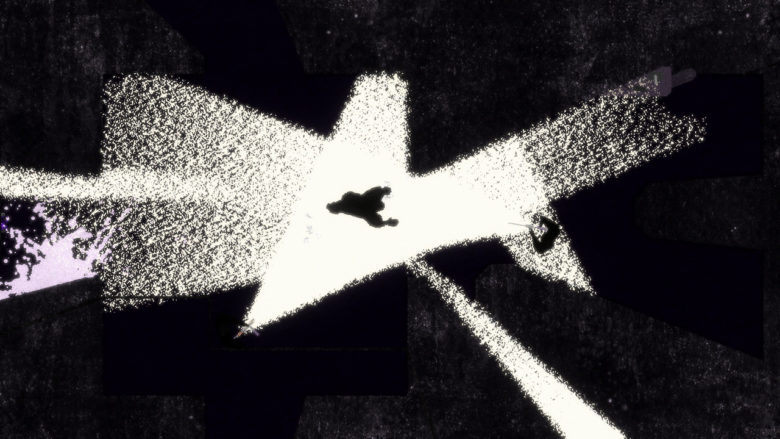 In the opening moments of 2019, we’ve seen an avalanche of AAA titles land on our doorstep here at Gamespace. That might be a cause for celebration but follow the trail of devastation, crushed hopes, and wrecked Playstation 4’s and you might not agree. What makes today different is Ape Out, a seemingly simple indie game and a potential break out hit.

The team behind E3’s best onstage debacle, Devolver Digital bring Ape Out to PC and Nintendo Switch, and it is just as utterly unique as the publisher’s pedigree suggests. Ape Out comes from the minds of and developers Bennett Foddy, Matt Boch, and Gabe Cuzzillo and puts players in the paws of an aggrieved ape. Subjugated and set in chains, players must break out of their confinement using nothing but their wits and the brute force strength of one giant gorilla. Ape Out is set against a variety of backdrops that include high rise office blocks and war-torn bunkers, all constructed around a manic dance of destruction and set to some funky jazz beats that put definite punch into proceedings. 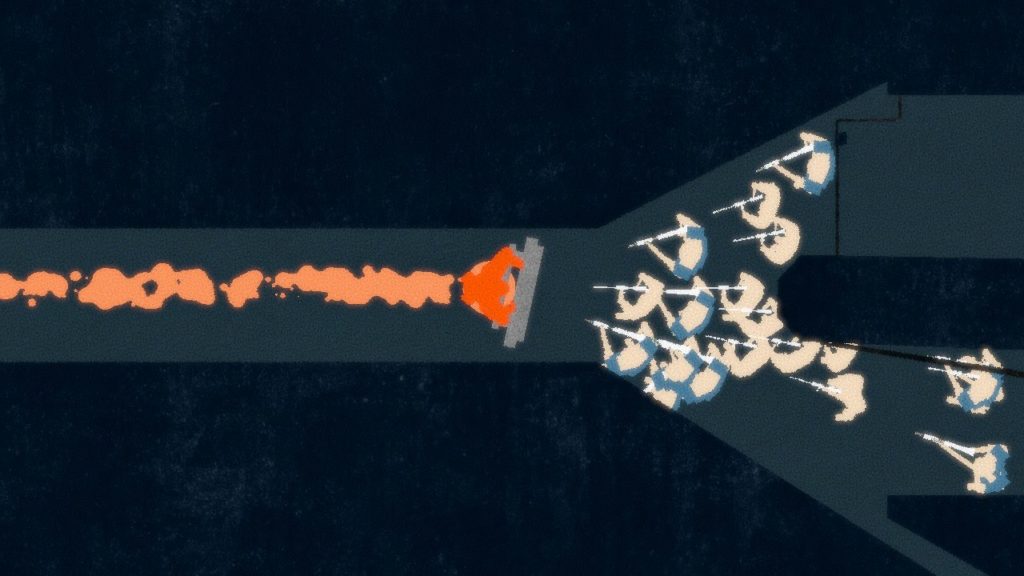 We tried monkied around with the Nintendo Switch version of Ape Out and from the moment you load up this primate adventure, things look deceptively concise. A faux 35mm grain builds on a simple, but bold, color scheme that apes the iconic work of Saul Bass and could easily have been torn straight out of any Hitchcock B roll. Our man in a suit is a massive orange gorilla that sits well in the minimalist animation and utilitarian architecture that seems adequately oppressive before the first hint of human resistance appears on screen.

Taking a top-down approach, Ape Out does not make it particularly difficult to navigate your way into trouble. The titular ape can be dragged around any of the game’s levels using the Joycon analog sticks. Stumbling through open corridors or smashing unceremoniously through glass windows, Ape Out’s orange antagonist gains momentum as it barrels along, picking up speed and even the odd human guard. A simple set of additional controls allow players to grab these guards, pull open environmental objects, and smear unfortunate bystanders across the same corridors you are trying to escape. Controls don’t get much more complex than this, yet Ape Out takes this uncomplicated idea and keeps things fresh with lots of well-considered variation.

Levels in Ape Out are generally short, with f four or five stages to scoot through and never cost more than a few minutes. This does not mean that levels are easy. You will not make your destination first time. As your ape barrels across a labyrinth of walkways, a range of enemies pop up to take you down. Guards with handguns, machine guns, and even grenades stand in your way as you make a bid for freedom. With no obvious health bar and a thin skin, players might get one or two slip-ups before falling. The pressure to pulverize your captors before another unannounced army comes marching around the corner adds real agency to the visceral ape em up that occurs, and this is undeniably a bare-knuckle brawl. 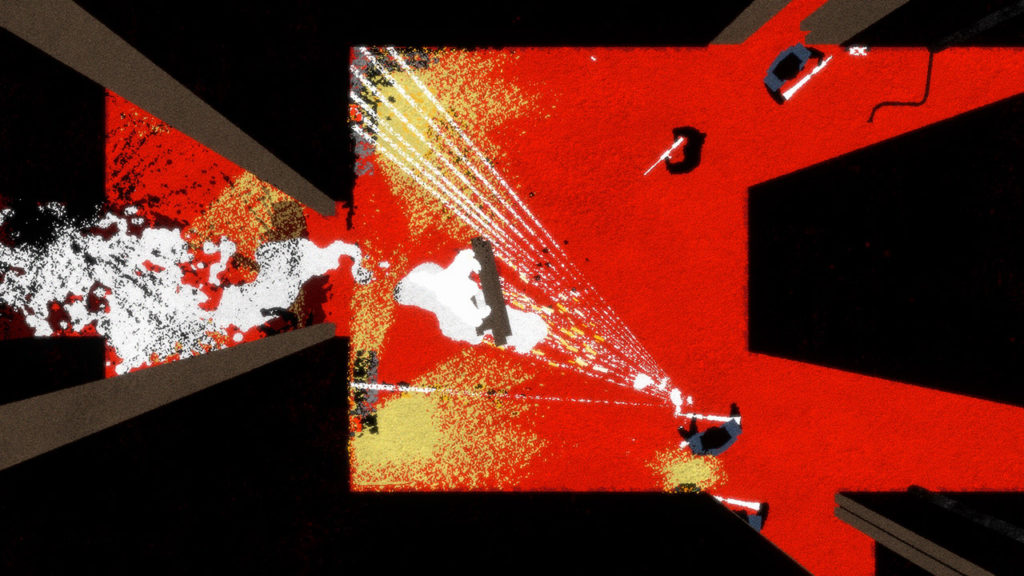 As you traverse Ape Out, go wild, knock armed human guards around, and crush the odd innocent bystander. Ape Out is a decidedly cathartic experience. Human meat sacks explode in a bloody mess as they slam into walls while eviscerated body parts, blood, and some of your own orange-utang insides decorate the hallways. Fire, explosions, and the din of automatic machine gun fire add to the intensity of the experience. The unnecessary gore is made even more enjoyable by the utterly outstanding musical soundtrack that accompanies events. The jazz-funk percussion that plays in the background ramps up in intensity as you build momentum. When guards get on your tail the game seems to know to ramp up the tension, increasing the attack of the snare and throwing in player-driven percussion to accompany the elimination of enemies. Watching a guard explode against a wall as a cymbal crashes in response, still hasn’t gotten old after hours of play through.

The Soundtrack, which acts as a dynamic procedural backdrop to the adventure, is intelligently tied to level design. Levels are titled as tracks and a set of tracks makes up Side A and B of an album. This thematic throwback to old school vinyl records means that the music changes as level themes change in a really satisfying manner. It also allows for repeated play through via an on-screen record collection. 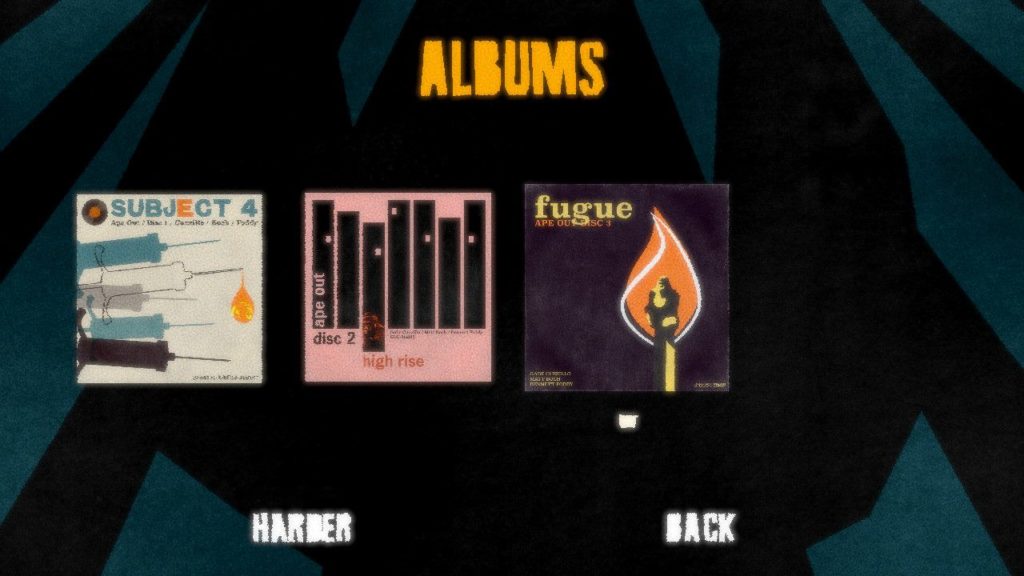 Honestly, I adore Ape Out. Visually it seems very uncomplicated, but step into the shoes of this gorilla and you will find that its simplicity belies a very considered approach to game design. As I barge through a maze of opposition, lots of little considerations make me smile. From my gorilla’s paw prints as I plod through a guard’s mangled body to the level changes and an utterly outstanding soundtrack. This is not a perfect game, however, and if you don’t take to the aesthetics or need a narrative function to your bid for freedom you will be left wanting. However, if you remember the cathartic joy of Carmageddon or love Hotline Miami, there’s something in Ape Out for you. Get your gorilla on and Ape Out, it’s fantastic! Ape out is available now on PC and Nintendo Switch. Alternatively, check out more information on the official website.

Written by
Ed Orr
For those of you who I’ve not met yet, my name is Ed. After an early indoctrination into PC gaming, years adrift on the unwashed internet, running a successful guild, and testing video games, I turned my hand to writing about them. Now, you will find me squawking across a multitude of sites and even getting to play games now and then
Previous ArticleWorld on Fire Blasts Onto MobileNext ArticleKilling Floor: Double Feature Comes to PlayStation 4 and PlayStation VR 21 May