A number of classic franchises have received the “Warriors” treatment over the last few years. Zelda and Dragon Quest being chief amongst them. Some have even been so successful with the crossover they have earned their own sequel. Bill gave the first Dragon Quest Heroes: The World Tree’s Woe and the Blight Below high marks over at MMORPG. It should come as no surprise that Square Enix and Koei Tecmo assuming we could never have too much of a good thing and are releasing Dragon Quest Heroes II later this week in the west. (You can already find 1&2 bundled together in Japan for the Switch). This is our Dragon Quest Heroes 2 review.

Dragon Quest Heroes takes the best from both the Dynasty Warriors franchise and the Dragon Quest franchise and mashes them together. Dynasty Warriors is known for its fast paced quick twitch combat that essentially has you fight wave after wave of enemies across battlefields to capture and hold strategic points. Most of the time you can get by with just mashing buttons but for harder battles, you are better served by performing combo attacks. Dragon Quest is a franchise of RPGs that has been around for the last 30 years and is originally known in the west as Dragon Warrior. 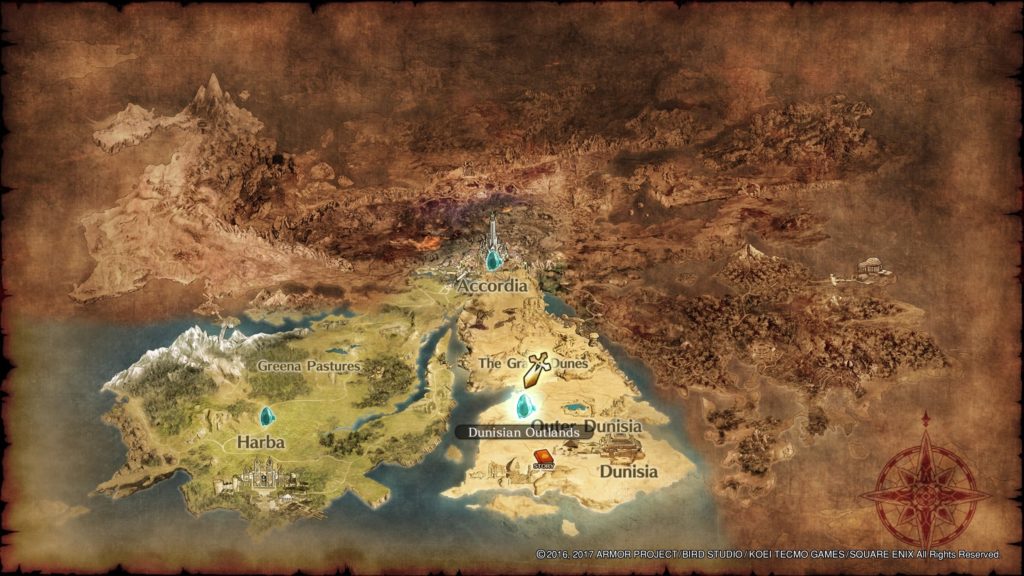 Dragon Quest Heroes II takes the original Dragon Quest Heroes formula and builds upon it. While the World Tree’s Woe and the Blight Below was a fun game some of its core RPG elements were underdeveloped. While Square Enix and Koei Tecmo have not gone back to the drawing board and rebuilt this game from scratch they have refined elements of it. Most noticeably they have expanded upon exploration and the quest system has been tweaked. You’ll also discover a hub city, in this case, Accordia, faster than you discovered the hub in the previous entry.

In Accordia you can upgrade your characters through purchasing armaments, improving their skills, and check on completed achievements to earn a special currency. You’ll also be able to change your party composition. It’s also from here that you can travel to new contested overworld areas.

Exploration has taken on new meaning in Dragon Quest Heroes II. Previously you went from map to map and completed quests by killing monsters. From time to time you’d be called back to the same location to clear it on a harder difficulty. In the newest entry, you’ll explore out from Accordia and enter into large zones. In these zones, you’ll be able to discover treasure, monster encounters, and NPCs. NPCs will help guide you on your main quest or from time to time offer you side quests. Completing side quests is not required but will award you with bonus experience. So feel free to let that mindless villager get eaten by a pack of mummies for being dumb enough to wander the desert alone. He deserves it anyway and you won’t be penalized for it. This is an improvement over the first game. 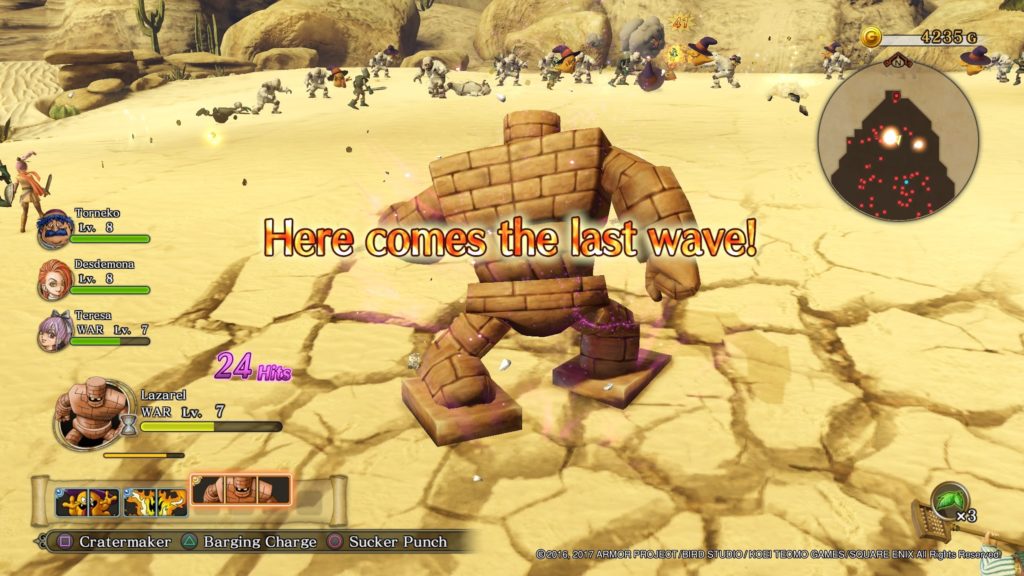 While most systems received an upgrade the camera overall feels lacking. You do have options that allow it to trail or follow you, set presets to zoom, and it does offer an auto lock on mode. The auto lock will target big bosses but it won’t sub-bosses or smaller monsters. Most small monsters don’t warrant to be targeted but some of the larger ones do. These you can still manually lock on but this leaves you character moving at weird angles around the monster. You’ll look like you are facing away from the target and run to the side yet you are still able to attack it. You don’t circle strafe your target as much as you run in circles around it. It would be better if the camera was looking over your shoulder in these situations but it doesn’t.

One of the few systems changes that I didn’t enjoy was the monster coins. In the past, you could collect and use monster coins in a variety of ways. Some of the larger monsters you could summon and use as guardians. These summonses could help you press the attack or you could leave them on defense as a rear guard. Now, these larger monster coins allow you to play as that monster for a short period of time. It does let you live out some vicarious fantasies of playing as a golem but I feel it takes away from the strategy element on certain missions. 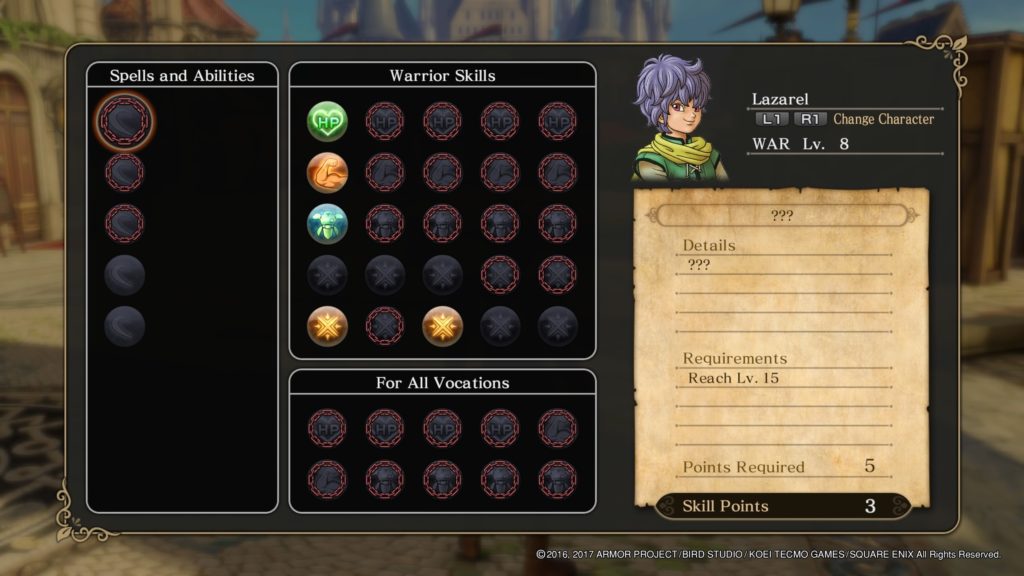 The weakest link in this game full of fan service is the cast of characters. It does include a wide range of people to play as that encompass a variety of marshall sets. Ranged, melee; physical, magic, are all present, even if it does skew melee heavy. The personalities of the main characters are what I find lacking. I don’t view Lazarel or Teresa as milquetoast avatars of the player left to be filled in by our own imagination of them. They have their own characteristics, I just find them boring. However another series newcomer Desdemona is well developed and would be right at home in a mainline series entry. Of the characters that have crossed over from the other games in the franchise, Maribel and Ruff stand out the most.

Dragon Quest Heroes II is successful in carrying the torch from where the first entry in the franchise ended. Heres II has enough improvements over previous systems to make it feel more like an RPG and less like a game focused solely on hack ‘n’ slash. Unfortunately, the characters didn’t click for me the same way they did with the first entry. If you are looking for some button mashing fun though you’ll find it aplenty in this game.

Note: Our review was conducted with a copy of the game given to us by Square Enix PR.

DRAGON QUEST HEROES II is a hack-and-slash, field-roaming Action RPG that sends players on a new adventure to restore order in a once peaceful world filled with hordes of monsters and battles of epic proportions. Up to four players can band together in cooperative multiplayer to conquer swarms of enemies and defeat challenging boss monsters. There is also a cast of many playable characters each with unique moves and abilities – including a host of familiar faces from the DRAGON QUEST series and four brand-new heroes that must team up to defeat an unknown threat looming over the Seven Realms.
7.5
Average User Rating
1 vote
Have Your Say!
Your Rating: 0
Submit
Write A Review
Genre:Action RPG, hack and slash, RPG
Rating:Teen
Developed By:Omega Force
Publisher:Square Enix
Modes:Single-player
Series:Dragon Quest Heroes
Engine:Unreal 4