If you’re as old as I am (about three years shy of ancient) then you most likely remember the old saying, “if it ain’t broke, don’t fix it”. Drinkbox Games, the studio that brought us the original Guacamelee!, has taken that to heart with the release of Guacamelee! 2. Originally released back in August of this year, this Metroidvania platformer will find a new home on the Nintendo Switch December 10. I’ve had the privilege over this last week to spend some time with this wacky sequel on the Nintendo Switch and am ready to dish out the details on this latest port. So grab that coffee, kick back and check out the Gamespace.com review of Guacamelee! 2.

Set several years after the original game, Guacamelee! 2 finds our protagonist basking in the glory of hero retirement. Having saved the girl, the town and the world of the living, our hero has settled down to a life of family, food and familiarity. However, with a new threat looming on the horizon, our hero Juan Aguacate jumps back into action this time not only setting out to save his own world but that of the mexiverse.

Pulled into the Darkest timeline by his once mentor, Uay Chivo, Juan sets out on a task of stopping a Luchador named Salvador who has become corrupted by the power of his own mask and seeks out the three relics that will give him the Sacred Guacamole making him all powerful. The story sees our hero jump from timeline to timeline, between the world of the living and dead and through a host of new locations and settings. 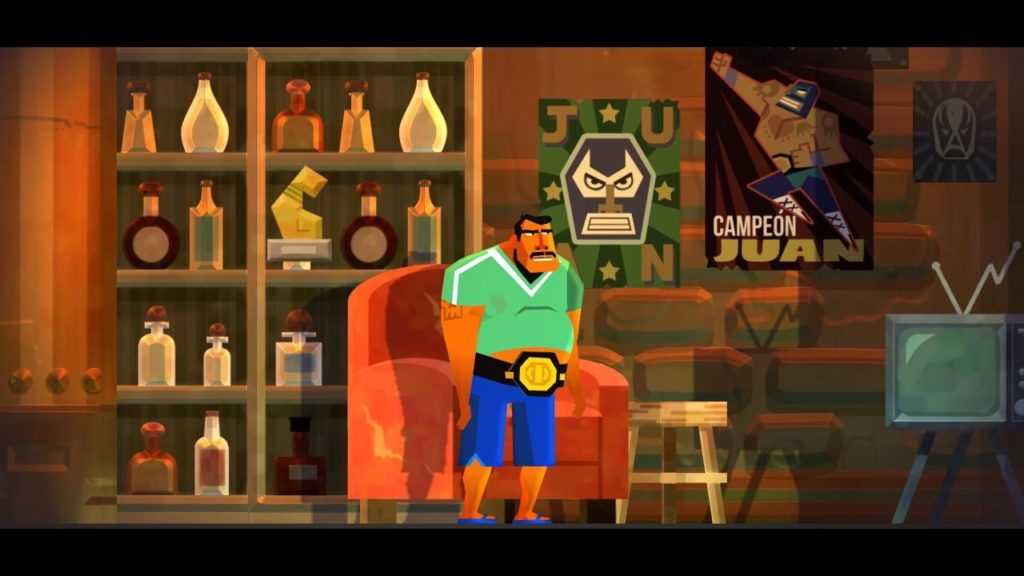 As crazy and over the top as the first title in the series was, Guacamelee! 2 manages to top its predecessor without making it feel like the same old song. In fact one of the most impressive parts of Guacamelee! 2 is how at its core it is the same game as the first but still manages to present an interesting (albeit wacky) story that makes the whole thing feel fresh.

Combat and platforming follow the same basic formula as the first game with combos being the bread and butter of combat. Progression comes in the form of powerups and item collection. The former are purchased at shrines with coin collected while adventuring. Things like stronger attacks and more heal can be purchased. Alternatively, pieces of hearts and other items can be collected and once pieced together give a permanent stat increase. This encourages exploration of the wonderfully crazy world around the player and rewards those willing to test their platforming skills.

The Nintendo Switch handles both the platforming and combat exceptionally well with the later feeling quick and responsive during gameplay. In fact, the game plays and looks as great on the Switch as it does on other consoles but with the added bonus of portability. In fact, one of my favorite thing about playing this on the Switch was that Guacamelee! 2 rewards even short play sessions. This coupled with the Switch’s mobile nature have created a wonderful combo for players. 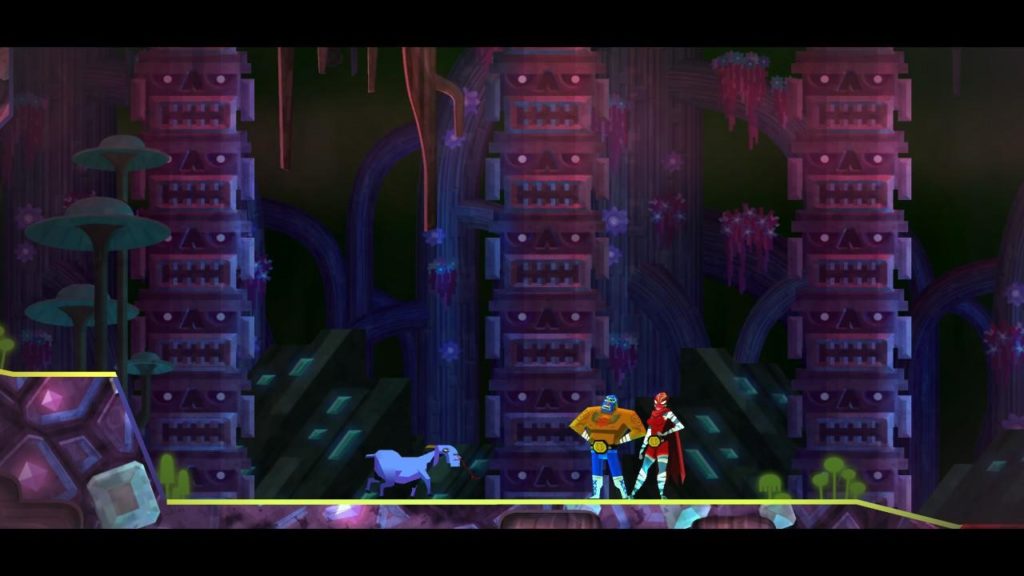 The platforming is well balanced with some creative and challenging moments throughout without being so difficult as to cause rage inducing controller throwing. In this case that is especially important considering that throwing a controller with the Switch generally means pitching the console as well, an act you would most certainly regret. Overall the world building is as refined and well thought out as its predecessor.

Speaking of portability, multiplayer for Guacamelee! 2 works exceptionally well. While my son and I were recently waiting for an event to start we spent some time playing with the local co-op features. Removing the Joy-Cons from their home on the sides of the console we were quickly platforming our way through the game. My only real critique has nothing to do with the game and more to do with how small the bumper buttons are on the Joy-cons when playing local co-op. As the left bumper is linked to dodge roll, it can be a bit frustrating to try and mash the tiny bumper button. However, with time and practice, I was able to successfully master the dodge roll on the individual Joy-con.

Tags: Guacamelee 2, nintendo switch, review
Summary
Guacamelee! 2 is a great sequel that manages to carry over everything that worked in the first game while offering a fun, zany new story for players to discover. The Nintendo Switch port brings the added bonus of portability and makes short play sessions possible for on the go players. Local co-op can be a bit rough if only using the Joy-cons but this is hardly a deal breaker. If you haven’t picked up Guacamelee! 2 yet I highly recommend picking it us on the Switch as it offers everything the other consoles do with the perks of mobility.
Good
Bad
9
Amazing

If you’re as old as I am (about three years shy of ancient) then you most likely remember the old saying, “if it ain’t broke, don’t fix it”. Drinkbox Games, the studio that brought us the original Guacamelee!, has taken that to heart with t...
0
Average User Rating
0 votes
Have Your Say!
Your Rating: 0
Submit
Write A Review