In a year already jam-packed with great games, Little Nightmares not only holds its own but also provides a unique experience which is both entertaining and intriguing. There aren’t many platforming games which leave me contemplating their game world long after I finished playing but Little Nightmares has taken up residence in my brain and I know I’ll be thinking about it for a while still. This is our Little Nightmares review.

The first thing I realized while playing Little Nightmares is pretty much everything can be interacted with. I couldn’t always do something meaningful with items in the various levels, but I could do something even if it was only hanging from a latch on a door which doesn’t open. Seeing what items, I could pick up and throw or smash in-game was entertaining because it isn’t uncommon for most items in games to be there just for looks. However, I did manage to sort of screw myself over once because I was just throwing things around and not paying attention to where they went. After I was done with that I realized I needed one of the items I had thrown… somewhere. I’m sure it was still in the room but I couldn’t find it and had to reload. So have fun playing with everything, just also pay attention to what you’re doing. 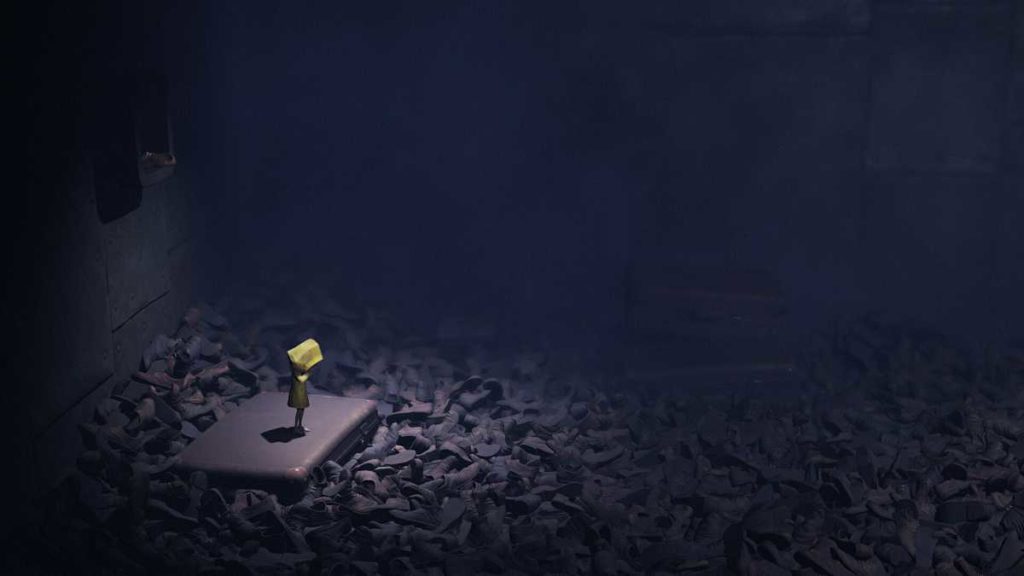 Checkpoints happen automatically and there’s no on the fly saving, which is nice in a way because it freed me from having to constantly save and I could focus on just playing the game. The downside of this was sometimes the checkpoint I’d get sent back to after dying was much further back than I expected it to be. Also, sometimes the point I was sent back to after dying wasn’t the same point I’d be sent to if I closed the game and came back later which was confusing.

For example, I was stuck in a room I have dubbed “the bookshelf room” and I died a lot in there. When I died, I was sent back to the entrance of the room which was no big deal at all. However, after spending more time than I’d like to admit trying to figure the room out, I decided to close the game and go back to it later. I figured the checkpoint was clearly the entrance to the room so it really wouldn’t be a big deal. When I returned, I was back at a previous puzzle I had figured out. It only took me a minute or two to backtrack, but it was a pointless place to start me from and really made no sense.

Another oddity with the checkpoints is there are lanterns and candles spread throughout the game. When they are lit, it seems like it is a checkpoint but they aren’t, however they do stay lit even after you die. So, they might be a modified checkpoint, maybe? There were a couple of times where they were in an area where the purpose was clearly to give me light while I was trying to do something. Most of the time the lanterns and candles just sort of seemed to be there for no reason at all and it was disappointing because everything else is done with purpose. 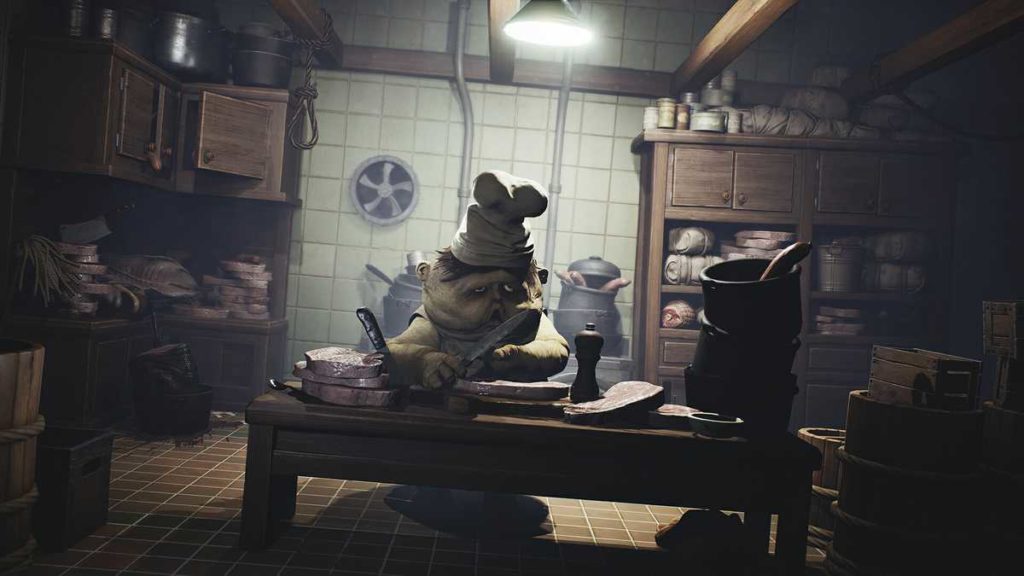 One of the other joys of Little Nightmares is Tarsier did a great job of instilling a sense of dread and foreboding throughout the game without really employing a lot of the standard horror tropes. There’s no real gore in the game and precious few jump scares; instead, there are environments disturbingly covered in what appears to be blood, creatures which have apparently killed themselves, some extremely creepy monsters to avoid, and a brilliant soundscape.

I honestly can’t overstress the importance and genius of the sound design (see/hear below) in Little Nightmares. Every sound has a reasoning and a precise placement which really enhances the setting. Most of the time there isn’t music playing, but when there is music it really punches the creep level up. I played through this game three times already and in each playthrough, I noticed another aspect of the sound design I hadn’t noticed before which is impressive because this is an aspect of games I am always highly keyed into.

One of the very few disappointments I have with Little Nightmares is I wish there was more variability to how the game can be completed. My first playthrough took me about eight hours to complete, which is on the high side because I checked out everything I could and I did get held up a couple of times on figuring out puzzles. But when I tried to play the subsequent times I was not able to find a different path to take and I could easily blast through everything. There are some collectibles to find and some secrets to figure out (neither of which are necessary to complete the game) but aside from those two things, there’s not a whole lot of reason for most people to replay Little Nightmares.

Overall Little Nightmares is a great game and I loved playing it.  The odd checkpointing and not having multiple paths through are small issues with a very solid and entertaining game.

Immerse yourself in Little Nightmares, a dark whimsical tale that will confront you with your childhood fears! Help Six escape The Maw – a vast, mysterious vessel inhabited by corrupted souls looking for their next meal. As you progress on your journey, explore the most disturbing dollhouse offering a prison to escape from and a playground full of secrets to discover. Reconnect with your inner child to unleash your imagination and find the way out!
0
Average User Rating
0 votes
Have Your Say!
Your Rating: 0
Submit
Write A Review
Genre:Action, Adventure, Horror, Platformer
Rating:Teen
Developed By:Tarsier Studios
Publisher:Bandai Namco
Modes:Single-player