It’s been nearly 25 years since I first strapped in plunged into Descent. Now, Sublevel Zero Redux is about to haul me back into the same madness as it launches on Nintendo Switch.

Originally an expedition on PC, Sublevel Zero Redux is one of a plethora of games that the late great Descent spawned when it took the Doom shooter series and gave it six degrees of freedom. It’s something of an unknown classic and yet it’s still busy inspiring respawns today. Like many other indie experiences, Sublevel Zero Redux takes the same basic concept that made the aforementioned progenitor great and plays it with a modern twist on the Nintendo Switch.

Designed by Sigtrap games, Sublevel puts players in charge of a lone space fighter. Searching the cosmos for advanced tech and answers to the galaxy’s slow spiral into oblivion, you find yourself trapped in a facility with no way out but through. With a ramshackle space fighter at your disposal players get the full six degrees of movement that you would expect and can see each challenge from almost every angle.

That freedom is one of the most exhilarating things about Sublevel Zero and easily the thing you will notice first. The Nintendo Switch port provides a more than adequate attempt at covering every base and contained among the claustrophobic corridors of Sigtrap’s game is the full range of 360-degree movements, strafing, and a roll function. It doesn’t sound like much but when placed against a wealth of very grounded games playing modern warfare, this freedom still feels revolutionary.

Between those moments of soaring exhilaration and turbo boosters, the same 1990s feeling of claustrophobia kicks in as the game regularly pushes players through a range of blind corners, choke points, and tight maneuvers just to get to the next level. It’s brutal but wonderful for those who remember beating this sort of challenge in their youth. 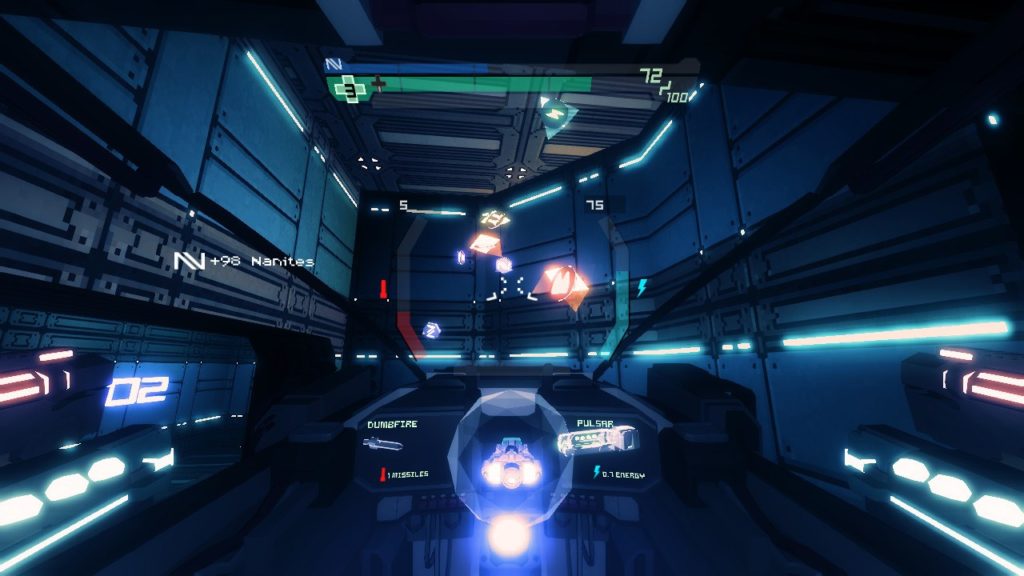 As you might expect, even the best pilot isn’t going to navigate their way around the army of defenses that lie in wait. Gun turrets, tanks, flying missile silos, and a bunch of other unrecognizable enemies block the path out of this trap. Players must make their way through a series of mazes and blow their way through a final challenge to fly further into trouble. The expectation is that you’ll find something to save your skin before the facility swallows you. In order to make that happen Sublevel Zero Redux equips a hail of weaponry to your ship. Players have space for two sets of guns and multiple missiles. These come in a variety of shapes and sizes. Bullets, blasters, energy weapons, homing missiles, swarms, and even flamethrowers are available to take down enemies. They provide an adequate variety of attacks and sometimes are just a blast to use. For example, the flamethrower is mostly atrocious to use but it’s the most fun addition by far.

Weapons don’t all come for free. Players powering through Sublevel Zero can grab gear and ammo from downed enemies and use them to craft new weapons. Different situations seem to pop up and extra gear is ultimately available each time you run through a level. The act of crafting gear sounds like a reasonable proposition until you loose potential supplies of ammo putting together a new contraption for your missile launcher. This means you will need to choose wisely when opting for anything new and shiny.

Taking down enemies is generally quite straight forward, with triggers attached intuitively to the Switch Lite’s shoulder buttons and aiming square and center. Sublevel Zero Redux does make the odd adjustment for its Nintendo Switch port with the inclusion of gyroscope support. This allows players to move their field of vision and aim by tilting the Nintendo Switch. When it works this can be a fantastic aid. When it doesn’t, I usually find myself crammed against another commuter unable to make the ship do what I need it to. It’s a gimmick that you will either love or hate and that is largely the tale of Sublevel Zero Redux. 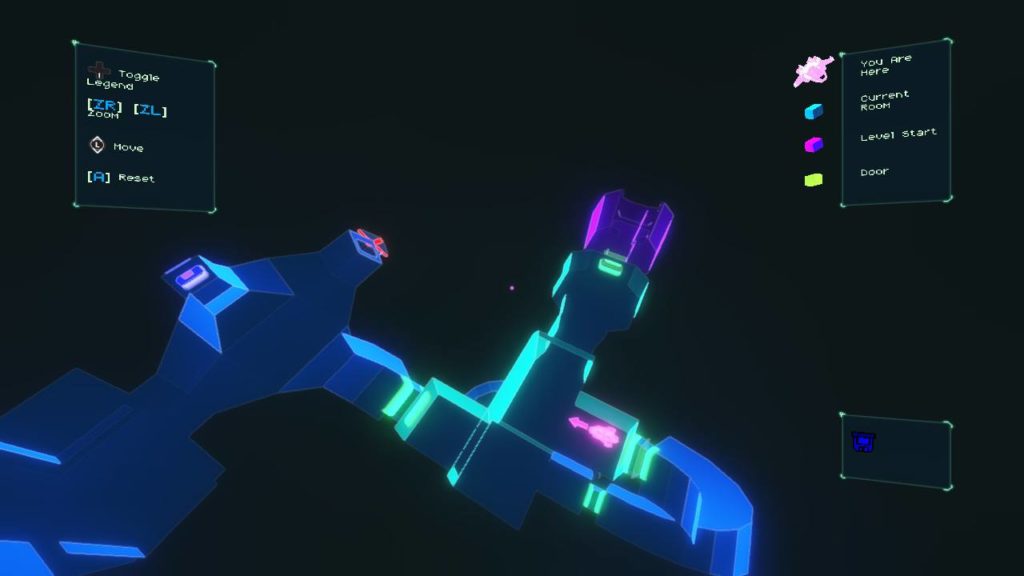 The aesthetic and general design of this inner space shooter is definitely within the same sector as Descent. Its retro stylings sling players into a cockpit pod that looks distinctly familiar. Less subtle is the retro-styled graphics of Sublevel Zero Redux. The space-age pixel art design plays to my own nostalgia, pitting players against floating polygonal shapes that hide how hi-def they actually are behind some simple concepts. Floating past neon lighting, particle effects and the glow of reactor cores, it is evident that this is a deliberate intent to rekindle those early impressions fo the genre.

This throwback works fantastically for me and the soundtrack just enhances the experience. The ambient dim and space-age synth has a retro flavor that evokes the action of old without sounding dated. The three hours of punchy hooks that Will Bedford put together for Sublevelzero redux are, in fact, the easiest part of the game to interact with and worth a listen on their own. 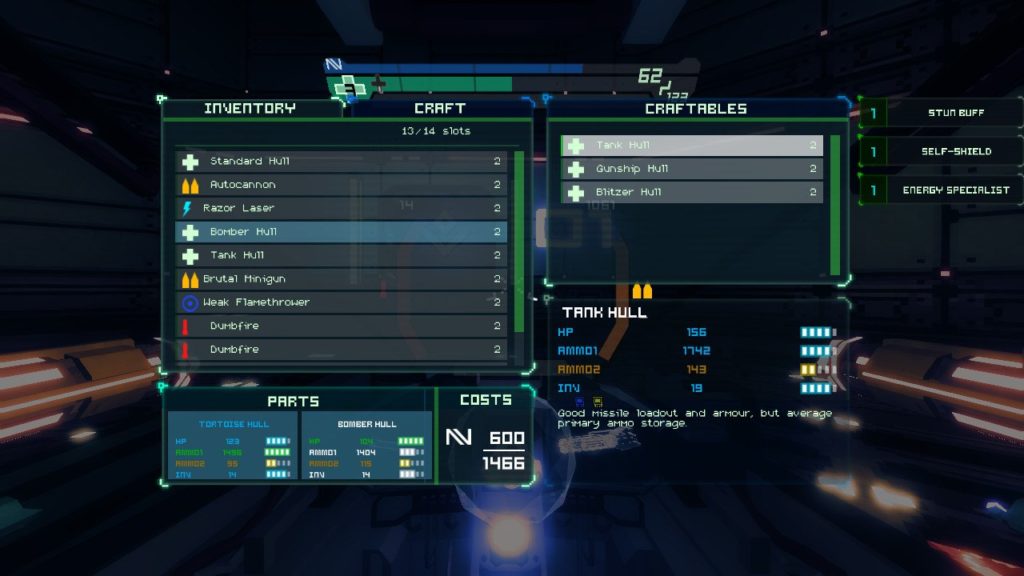 While this adventure looks and feels like a fantastic ode to my own experiences, it is going to be incredibly divisive. While the graphics are hit and miss for some players, they are well polished and really work well at presenting the Sublevevl Zero experience as intended. The combat and controls are going to be the deciding factor for many players. While the six degrees of freedom and procedural generation bring plenty of challenge to a relatively short six level or so experience, the whole thing can actually feel a bit overwhelming sometimes. Just as with Homeworld, which rewrote the concepts around 3D strategy, Sublevelzero redux requires the same level of awareness. Cramming the extra roll controls onto a console controller just about works but for anybody who is more used to the Star Wars school of space battles then this adventure will be a harsh awakening.

The use of the gyroscope is, as we mentioned, a hit and miss operation and while I found the combat fun, it was also difficult enough that I took several runs before I got good. This learning curve coupled with the permadeath aspect of the roguelike qualities makes Sublevel Zero Redux the type of game to pick up if you know you either want a challenge or remember the ridiculous difficulty of end game Descent with glee.Sublevelzero Redux is out now on Nintendo Switch and available on the Nintendo eShop. Thanks to publisher Coatsink we were able to give this a bash and there’s even a copy for you to win for the weekend. Just keep it here for your chance to win this game, later today. 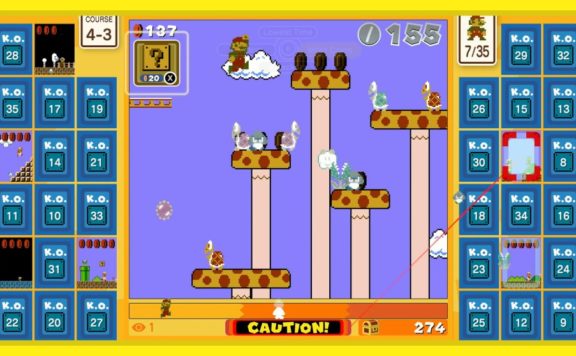 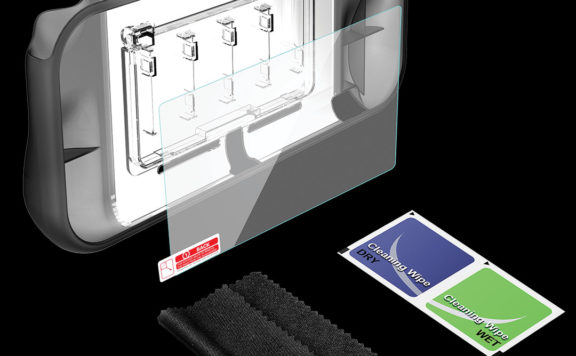 It’s been nearly 25 years since I first strapped in plunged into Descent. Now, Sublevel Zero Redux is about to haul me back into the same madness as it launches on Nintendo Switch. Originally an expedition on PC, Sublevel Zero Redux is o...
0
Average User Rating
0 votes
Have Your Say!
Your Rating: 0
Submit
Write A Review
Publisher:coatsink