Bushnell’s law states that “all the best games are easy to learn and difficult to master”. Mushroom Wars 2, the successor to 2009’s PS3 hit Mushroom Wars, captures perfectly the sentiment of that statement. Developer Zillion Whales has created a layered title that on the surface seems to be a simplified RTS with some simple concepts and controls. However after spending some time with game one quickly realized just how many layers this RTS has to offer. Originally released on iOS back in October of 2016, a Steam and console release is planned for October 06, 2017. With my hands on the Steam version for the last week, I have had plenty of time to try and tackle some of the many elements to this light-hearted Mushroom themed RTS. So without further ado, grab that coffee, sit back and check out our Mushroom Wars 2 review.

Set in a war-torn mushroom kingdom, Mushroom Wars 2 finds four tribes in a never-ending conflict to reign supreme over all the lands. With beautiful almost hand-drawn visuals, this title us a huge esthetic update over the original. The game sets you on the path of claiming glory and territory for your tribe with each of the four campaigns featuring you at the helm of one of the four. Each group has its own unique look and set of heroes (more on these later) that helps mix up what is essentially the same combat and units. This is all pretense for what is essentially a simplified but engaging take on the RTS formula. Building off of its former titles success, Mushroom Wars 2 works hard to present some new and unique ideas that help build the many layers that make up the core of the game. 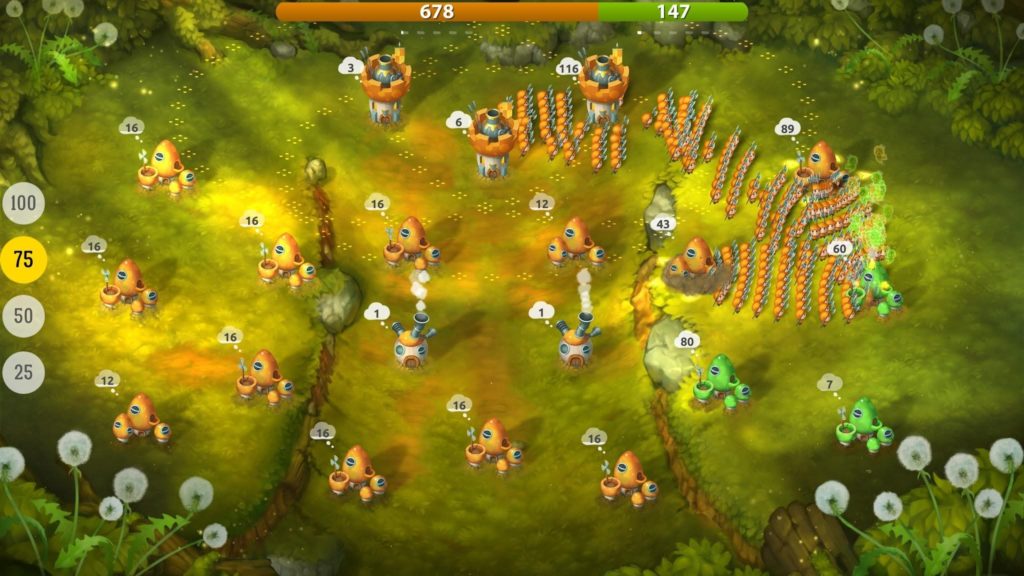 The game’s combat is beautifully simple cutting out much of the complexity of other RTS by doing away with managing multiple units in groups, memorizing the rock, paper, scissors systems of other games multiple units and managing the collection of multiple resources. Instead, combat and control focuses on simply overwhelming the enemy ‘zerg style’ as well as managing your own defenses. With one combat unit produced at the games only resource producing building called villages, one defensive structure in the form of a tower and one upgrading structure in the form of a forge, much of your time will instead be spent on balancing your units between protecting your territory and engaging another’s.

With one combat unit type available the only edge you can really gain comes for the forge which offers upgrades for your units. This coupled with the upgradable towers really become your only line of defense and offense. What makes combat so engaging is the constant back and forth between offense and defense. With the removal what other RTS’s would consider build time, you will find yourself in immediate peril right from the beginning of a match. This tension is what makes Mushroom Wars 2 so engaging, there is no downtime. The pressure is always on and forces you to make quick decisive decisions where one wrong move can really be the difference between victory and defeat.

The game becomes even more engaging when you factor in the morale and hero systems. The former is a system that offers a star based buff to your units and buildings based on how many units you currently have. The more stars you have the bigger the buff with no stars simply meaning your units and buildings operate as normal. It’s an interesting system but during my playthrough I have to confess that with the constant influx and death of units I really didn’t feel the impact of the buff at any point. As I only played a few multiplayer matches I didn’t really get to see the full potential of how this system works but could imagine that in a four player free for all having a two-star morale buff would definitely come in handy. 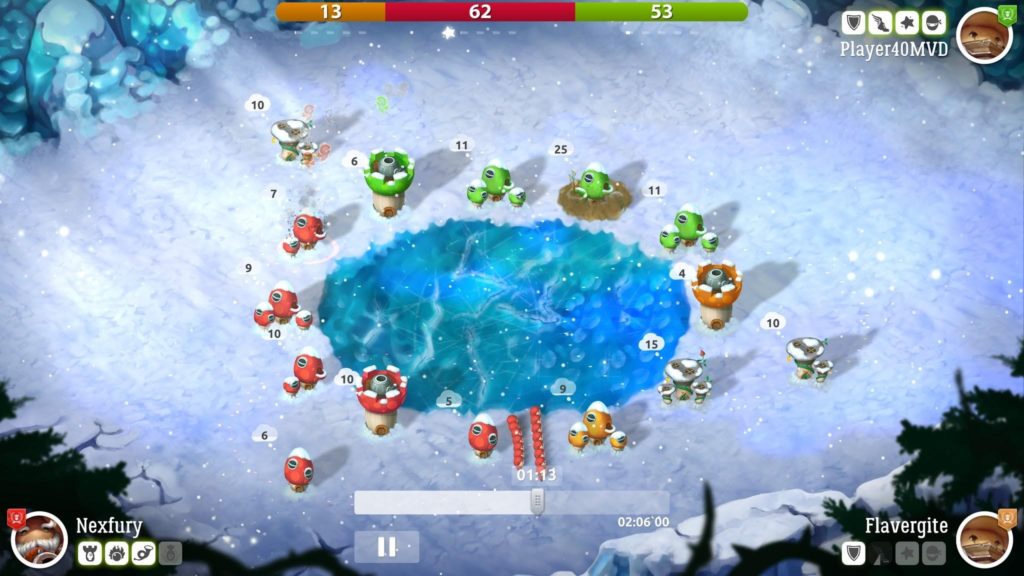 The Hero system is what really thrusts Mushroom Wars 2 into a challenging, competitive experience. Each hero (two per tribe) comes with his own unique set of abilities to deploy on the field. With powers that impact either units or buildings, selecting a hero dramatically changes your strategy on the field. These abilities are cast by collecting the souls of the enemy so the faster you can take out enemy units the faster you will have these abilities at your disposal. This system really allows for playstyle diversity which, in turn, creates a really new and engaging experience every battle. Multiplayer really allows the Hero system to shine offering some great ‘clutch’ situations where casting the right ability at that crucial moment sees the scales tip in your favor.  The hero system is a great part of the game’s DNA and helps to add yet another layer to this unique RTS.

Multiplayer offers some great variety in gameplay with everything from up to four players free for all to a two verse two co-op mode. Much like the first game in the series the longevity of Mushroom Wars 2 will come from its competitive multiplayer. With online play with both friends and random people offered upon release, one could spend many an hour conquering their fellow mushroom’s kingdoms and with the morale and hero systems in play the experience can vary dramatically between matches.

Mushroom Wars 2 was a surprisingly engaging for me. I really wasn’t expecting myself to get pulled into what seemed on the surface to be a simplified RTS. Yet with it’s engaging, layered combat, easy to pick up and play attitude, four episode campaign and some great multiplayer offerings, Mushroom Wars 2 is a title worth spending some time with. Be sure to check it out when it releases on Steam, Xbox One and PS4 starting October 6th.