Pylon: Rogue by Quantum Squid is very much a click-fest of hack and slash combat interspersed with defensive right-clicking to keep from mangling your poor mouse’s left click button. The game is a top-down adventure, monster hacking game that is simple, well animated, and fun, while simultaneously creating a challenge of timing and control. When playing games of these types it is easy to just want to mash your way through; however, that would prove wholly ineffectual and only help you on your way to becoming deader, faster. And dead you will be. Unfailingly. This is our Pylon: Rogue review.

In Pylon, the entire content of the game feels focused around the idea that you will die; in fact, some of the accomplishments and unlocks in the game are explicitly dependant on the player committing to run after run on various characters and dying in various ways. And don’t think I’m kidding about dying, the very first loading screen I was presented with when booting up the game assured me: Death happens. And it did, quite liberally. The closest thing I have ever played to a game like this is Diablo’s Hardcore mode, in which there is no respawn for your character. You simply go until you die and challenge yourself to last longer next time. But in Pylon, you at least have the satisfaction of knowing that your culmination of deaths may possibly garner you an unlock. That is satisfying… Right?

But let’s examine this a bit further. The gameplay is fun and entertaining. Nothing groundbreaking, but well implemented and some of the effects can warrant a smile; such as turning your foes to gold so you can beat them into (oddly enough) gems to use as currency. I found the gameplay, as I mentioned above, to be similar to a Diablo-esque game, with the difference of having combos dictated by your left click patterns and a defensive ability that, if you are skilled, you will find yourself using almost as often as the offensive abilities. 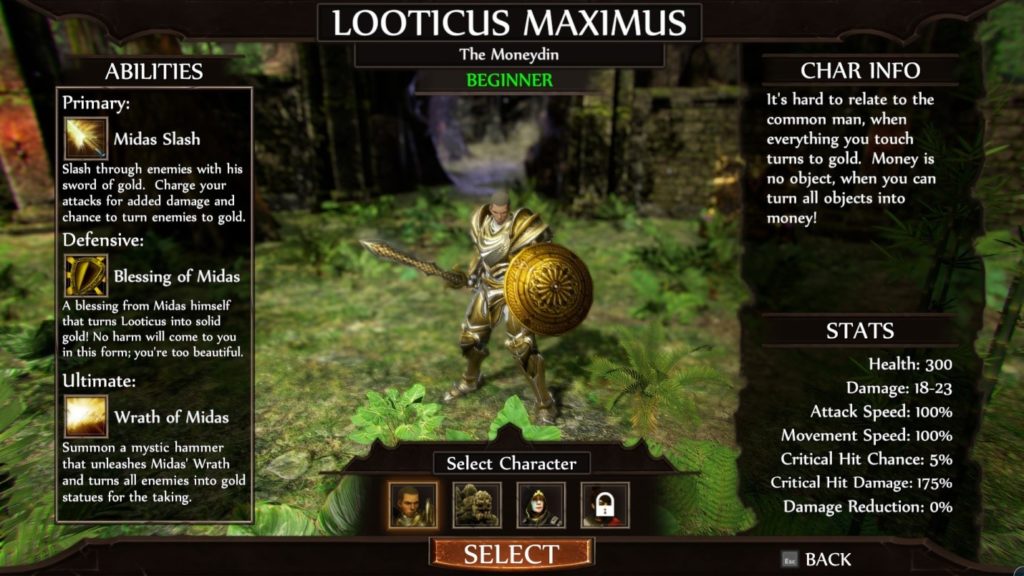 The title screen menu presents the player with the option of starting a new run, an option to continue your current run, an option to view your unlocks, and finally a save and quit option. Selecting New Run will take you to a screen that gives you a choice of four characters to choose from, each embodying a difficulty setting. Looticus Maximus the Moneydin, as the “beginner” is essentially the paladin/knight type and comes with two weapon combinations (sword and shield or shield and shield) that can be chosen between before each run and will change your offensive, defensive, and alternate abilities. The “Intermediate” skill level is comprised of the next two character types, Rokk and Ms. Underhood. Rokk the Rock (my personal favorite) is a giant rock golem with amusing names for his abilities, such as Smash Fist and Rolling Stone (get it? Rock, Rolling Stone) and will potentially have different elemental attacks rather than weapon combos to choose from, although currently he is limited to earth. Ms. Underhood the Sureshot is a ranger type and I found her “intermediate” to be much more challenging than Rokk’s. Finally, the “Expert” difficulty is embodied in the rogue/assassin: Killyana the Stabstress, who is locked to begin with and only unlockable by defeating the final boss. Which may be more challenging than it sounds.Like Rokk and Looticus, each character will, at a later point in time, have up to three different weapon types to choose from; currently, however, only Looticus has more than one.

The player, after having chosen their character/difficulty level, will find themselves on a randomly generated world map in which a series of locations are connected, confining the player’s movement to the linked routes between locations.  If you are lucky you will find a chest laying out in the open waiting for you to claim its contents. This may reward you with an item, or with gems to spend in the Item Shop. 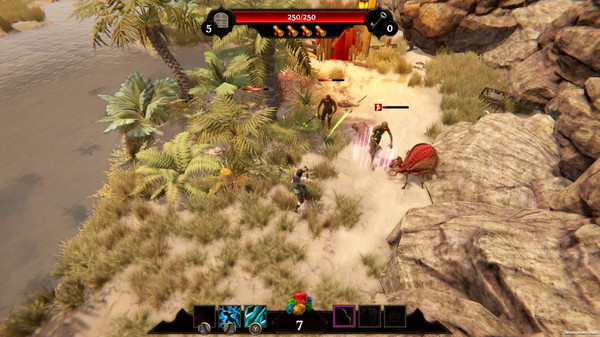 The Item Shop can be accessed from the world map at any time by holding down the 1 button and contains a variety of items that are intended to help you.  The store consists of its own area with four stalls available, each stall carrying three of a specific item type for purchase. For example, the artifact stall has three artifacts available for purchase. Sometimes the artifact in one purchase slot can be a duplicate of an artifact in one of the two other purchase slots, which further limits your options. Occasionally I had the same item in all three slots.

Unlocks, gained by completing specific achievements, allow for greater variety in the item shop, and unlocks remain despite dying. Which is the only thing you keep when you die; everything else: gems, obtained items, and the current world map (along with your progress) are all zeroed out. And remember, unlocking an item merely gives you a chance that it might show up in your item shop, which refreshes after each location is defeated.

The goal is to defeat four areas per map to unlock the map boss so that you can confront him, then defeat the next world map to confront that boss, and so on until you fight the final boss. This is not as easy as it sounds as each area, or stopping point, on the world map contains several rooms, the number of which is indicated when you step on the location tile. It will also indicate how many locked chests are in that location, which will require a key to open. Keys are dropped randomly in the rooms, or can sometimes be purchased in the item shop. 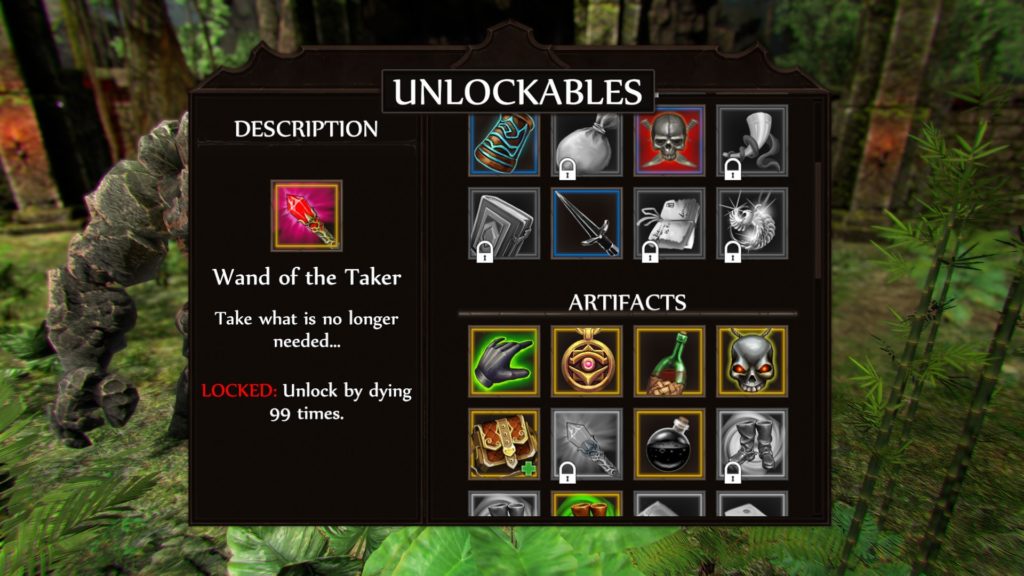 Each location has a number of rooms that you can traverse, and once committed, must be traversed until the completion of a room presents an exit, which, if you are lucky, sometimes might happen before the final room. Each room presents a significant challenge, and you may find yourself in dire need of health after one or two rooms. On the occasion that an exit does pop up before the final room,  it is in the player’s best interest to use the exit, as it will count as an area completion regardless of the number of rooms you have defeated. Alternately, rooms may present with a chest of gems or health. This can get somewhat frustrating as your character may need to leave to get health from the item shop and may not get the exit when needed. Leaving the location point by escaping to the main menu will revert the location point to its pre-entry status and remove any items or gems acquired within. You may, however, find that to be a decent tactic for a quick reset if you find your tactics were ineffective. If you are lucky, one of the assailing monsters may drop some health, but that is usually a rare occurrence even on easy.

All in all, Pylon: Rogue has proven to be a very challenging hack and slash that will require quick adaptation, decisive accuracy, and a great patience with frequent death. The game is graphically pleasant and fun to play and even throws in a range of different tactics and mechanics. If you like hardcore challenges, this is definitely a game to try out. 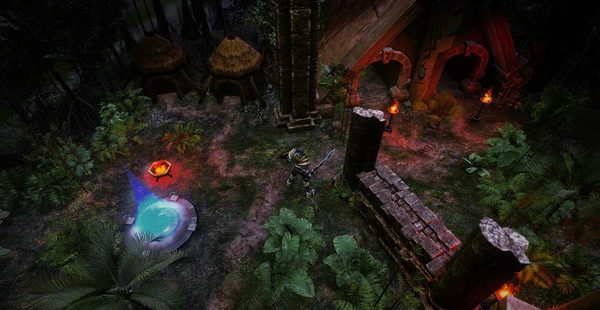 Pylon: Rogue by Quantum Squid is very much a click-fest of hack and slash combat interspersed with defensive right-clicking to keep from mangling your poor mouse’s left click button. The game is a top-down adventure, monster hacking game that is simple, well animated, and fun, while simultaneously creating a challenge of timing and control. When playing games of these types it is easy to just want to mash your way through; however, that would prove wholly ineffectual and only help you on your way to becoming deader, faster. And dead you will be. Unfailingly.
0
Average User Rating
0 votes
Have Your Say!
Your Rating: 0
Submit
Write A Review
Genre:Action RPG
Rating:Teen
Developed By:Quantum Squid Interactive
Publisher:Quantum Squid Interactive
Modes:Single-player
Series:Pylon