You’d think a game about animal revolutionaries would be cute and cuddly, like a drunken squirrel. But, in spite of its charming and nostalgic visuals, Tooth and Tail is oftentimes as harsh and cruel as a gasmasked badger dispensing poison. Or pigs with handguns, tending to a slaughterhouse. Tooth and Tail consistently does an excellent job of setting expectations for the player and surpassing them, managing to charm, shock and even delight the player with its subtle, tight mechanics and evocative setting. This is our Tooth and Tail review.

Tooth and Tail is a tightly-executed RTS from Pocketwatch Games, the company that produced stealth-action game ‘Monaco’ back in 2013. In keeping with the standard set by their first game, Tooth and Tail has been executed with a laser-focus on the game’s core concept, leading to a remarkably well executed and consistent experience that is impressive, fun, and memorable.

In the world of Tooth and Tail, anthropomorphic animals live together: from pigs to mice, squirrels and chameleons, lizards, owls, foxes et cetera all coexist in a society with technology roughly consistent to that seen in World War 1. And, unfortunately, they’re all starving. 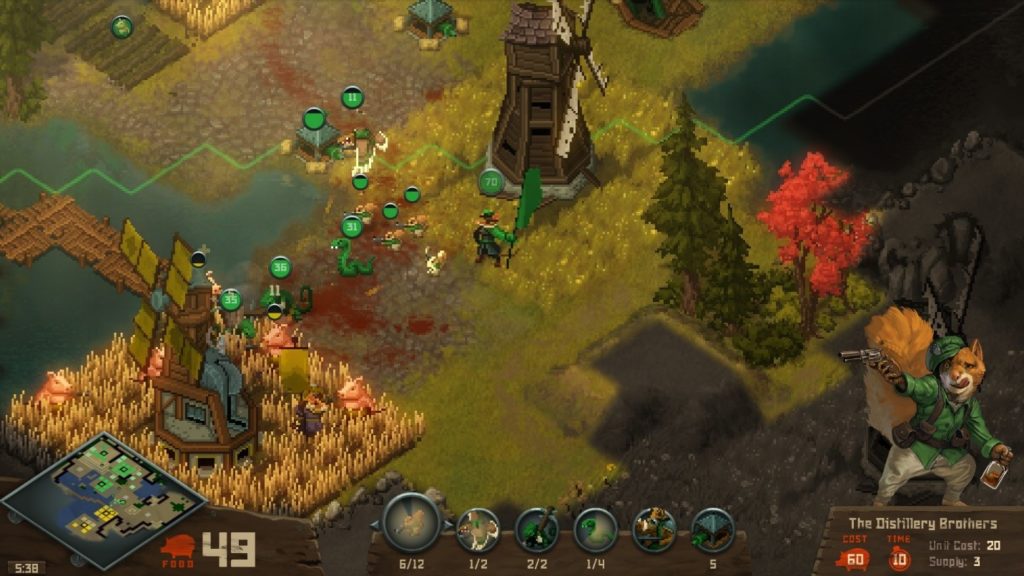 The higher classes in the society seen in Tooth and Tail are comprised of predatory animals, who consider it beneath them to feast on the food of, well, their food. They won’t eat grains, so they turn to murdering and eating each other, which doesn’t sit well with broad swaths of the populace. So, when the nobles start eating the poor, war breaks out. Yeah, a game with cute anthropomorphic animals centers, essentially, on what amounts to large-scale cannibalism.

From the outside, one might have expected some sort of Brian Jaques-eqsue Redwall tale about good versus evil, virtue and camaraderie amongst furry animals. But Pocketwatch was reaching for a larger target, telling a tale of suffering and hardscrabble bitterness, coated in a candy shell of adorable pixel art. And the campaign itself is solid: levels quickly ramp up from easy to challenging, and the story draws you forward to learn more. Between missions, the hero character you’re currently following is free to explore their current base of operations, check in on their troops (which often provides exposition into the bitter state of their world) and often select the next mission from a number of options. 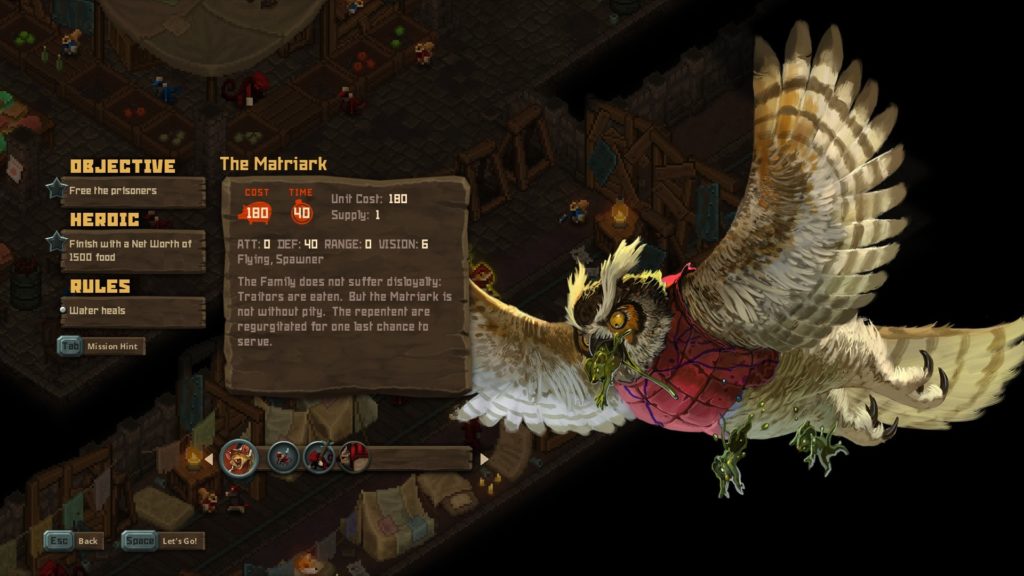 I hate to use popular titles as a point of comparison, as it’s often lazy, but the between-missions exploration, exposition, and mission selection does seem to have taken a nod from the StarCraft 2 campaigns to its benefit. The format works quite well, as Blizzard showed us time and again through the 3 SC2 campaigns, and lends a depth and vibrancy to the world of Tooth and Tail, which serves to reinforce the tone that Pocketwatch has expertly set for the game.

As I said before, Tooth and Tail has a laser focus. It doesn’t have tons of units, skins, or bells and whistles. It sets out its mission: to be an RTS focused on territory control and accessibility, set in a brutal WW1-era world, and it uses every tool at its disposal to reinforce that mission.

The game controls are simple, but require a bit of learning, especially for long-time RTS players who might be used to games like StarCraft or Company of Heroes. Instead of a free camera, players’ actions are directed through their hero unit. The hero places structures underneath itself, and is the player’s primary tool for scouting and directing their army, meaning positioning and timing are critical to successful play. But the game has virtually nothing in common with MOBAs: the hero unit has no attacks nor abilities, serving basically as an animated cursor: move orders are issued to the hero’s location at the time of the order (holding right click will issue a non-combat move and continually update unit’s move destination). 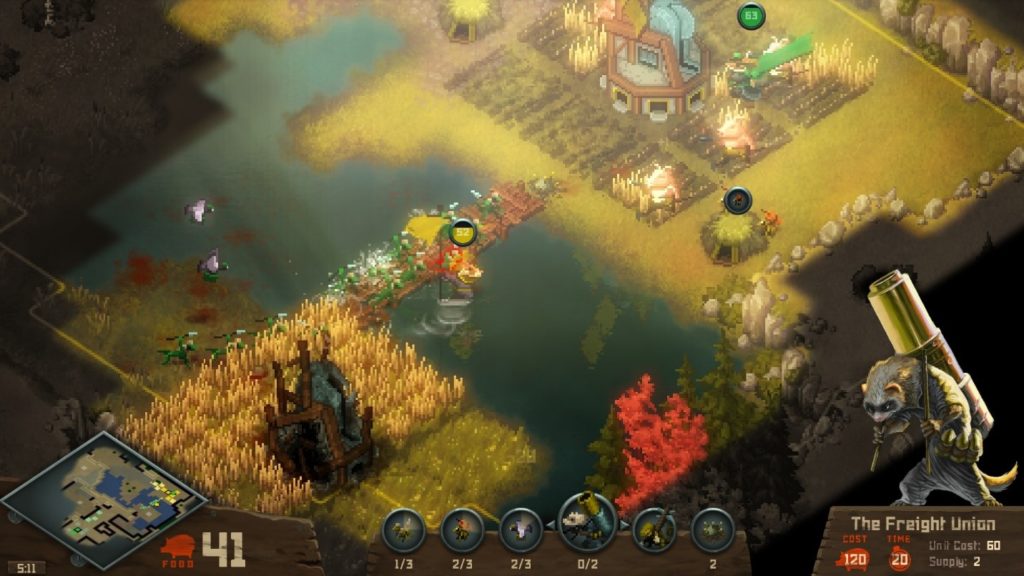 The player can issue orders to all units of a specific type, or to all units: there’s no fine-grained selection of local units, which can make coordinating one’s army a challenge. Gameplay, however, is fast and ferocious, with most units and structures being whittled down very quickly. The gameplay itself can feel almost frenetic at times, with expansion, production, scouting, and combat all vying for attention: units are produced automatically from their production structure, provided there’s food to pay for them, but returning to your own territory to plop down a production structure can leave an opponent open to operate unseen, or one’s army exposed. It’s challenging and engaging, and a surprisingly deep system for how simple it is to control.

If I have two main criticisms of the game, they are these: first, players are able to bring 6 unit types along with them into combat. This is a fun, pseudo-deckbuilding experience which can lead to interesting synergies and tactics, but it’s quite easy to leave gaps in one’s arsenal that the enemy can exploit: flying units, in particular, can be prickly in this regard.

My main criticism though is the game’s complete reliance on the food resource: everything revolves around having enough food. While this is certainly thematic, it can lead to some really frustrating situations in combat, where a larger army can simply overwhelm a defending player, who only has the recourse of food-purchased units by which to defend themselves. The gameplay, therefore, feels highly preventative, with little option for successful reactive play. It also makes gristmills (base locations) a fragile, high-value target. 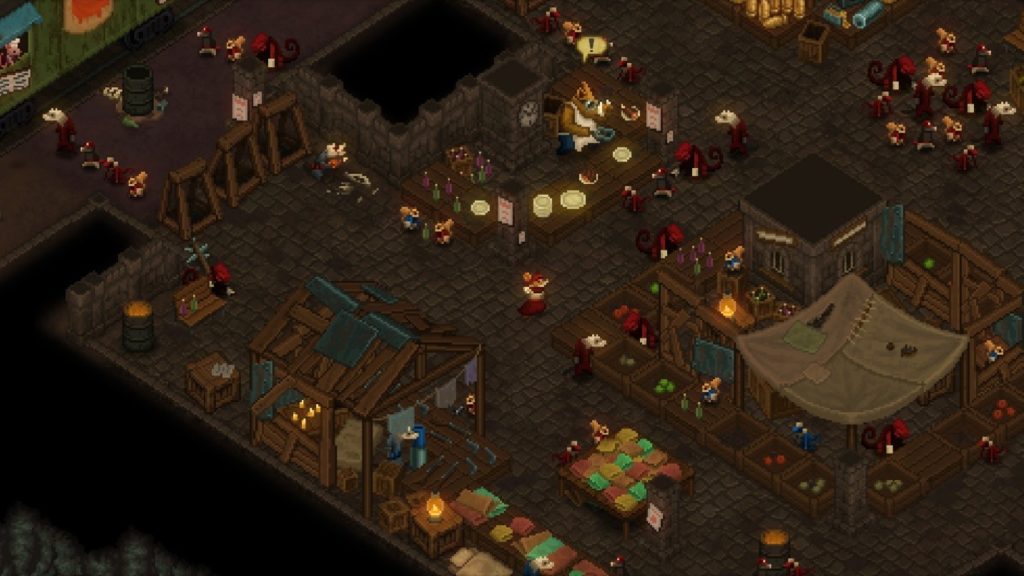 Those two semi-complaints aside, I definitely think that Tooth and Tail is worth a look. It has a compelling and well-crafted world coupled with beautiful pixel art graphics and a challenging and interesting campaign. It has a unique and fun multiplayer mode that has grown on me despite my quibbles. And more than anything, it shows the power of a studio determined to execute on their vision and the dedication to achieve a design laser-focused on providing a specific experience.

Tooth and Tail is an RTS with a twist: Players lead a deadly army of furry creatures in a quest for food. Factions include the Longcoats, the Commonfolk, the KSR and the Civilized. The objective is, of course, to decide who eats and who is eaten. Maps are procedurally generated and factions can be customized for every game experience. No two will be alike. In an additional twist, matches are only 5-12 minutes in length with controls designed for splitscreen couch play and for a gamepad. "Tooth and Tail is a popcorn RTS for veterans and newcomers alike".
9.5
Average User Rating
1 vote
Have Your Say!
Your Rating: 0
Submit
Write A Review
Genre:Strategy
Rating:Teen
Developed By:Pocketwatch Games
Publisher:Pocketwatch Games
Modes:Local Multiplayer, Multiplayer, Single-player