Pyre is the newest game from Supergiant Games and though it is a pretty big departure from their two previous games, Bastion and Transistor, it’s also clearly influenced by them. In this party based RPG Supergiant tells a deep and interesting story where player choice affects every aspect of the game and how the story plays out.

Supergiant Games at their Best

The gameplay of Pyre has two distinct modes. The first mode is the story sections where you learn not only about the world everything takes place in but also about the various companions who are gathered up throughout the game. As Pyre progresses depending on the choices I made I learned more about some things while I clearly missed some other areas (judging by achievements). The second mode is the Rites which are the main vehicle which moves everything forward and provides the short-term goals in the game.

Every character in Pyre, including the player character, are exiles who are trapped in an area known as Downside. The only way to earn your freedom is by participation in the sacred Rites which are essentially a trial by combat. In a Rite two teams of three face off against each other to reduce their opponent’s Pyre to zero by throwing an orb into it (alternatively you can also jump into the pyre with the orb). Each character has a different set of abilities and of course strengths and weaknesses, and the same goes for every other team you fight. Additionally, each time a team is faced they will have gained abilities and talismans and will be more difficult than they were previously.

Your team, the Nightwings, are the team by which all others are measured by. The Nightwings take part in the trials and help establish the team rankings for everyone else. When the fates allow the Liberation Rite will be held and one player from each team will be selected as having a chance at freedom. The stakes on the Liberation Rites are high since only the teammate on the winning team will be freed and this has long term implications for the larger goals of the team. Losing does not result in a game over but it will reduce your chances of having a positive outcome at the end of the game.

There’s an interesting mini-game to be played here with which characters you choose to liberate in what order. There were certain characters I had a greater affinity with when it came to the Rites because how their abilities worked just really clicked with me, whereas I struggled with some of the other characters. In this case it’s less of a comment about the characters themselves being weak and more about how I play games and my mindset. Different people would probably find different characters the most useful. Making sure I kept teammates who I was effective with while also liberating characters who would be of the most use for the end game was an interesting balancing act.

The first chapter of Pyre is linear and there is very little choice about where you go or how you get there. The unfortunate part of this is since this first chapter is not only introducing everything about the world, characters, and the rites, the chapter tended to drag a bit. There were a few points where even though I was keenly interested in everything I was also a bit frustrated because it seemed like it just went on with no end in sight. However, after the first Liberation Rite the pace of everything picks-up and is even more engaging. After the first chapter, I had a lot more control over where my group went and what we did which also helped prevent the feeling of everything dragging on. 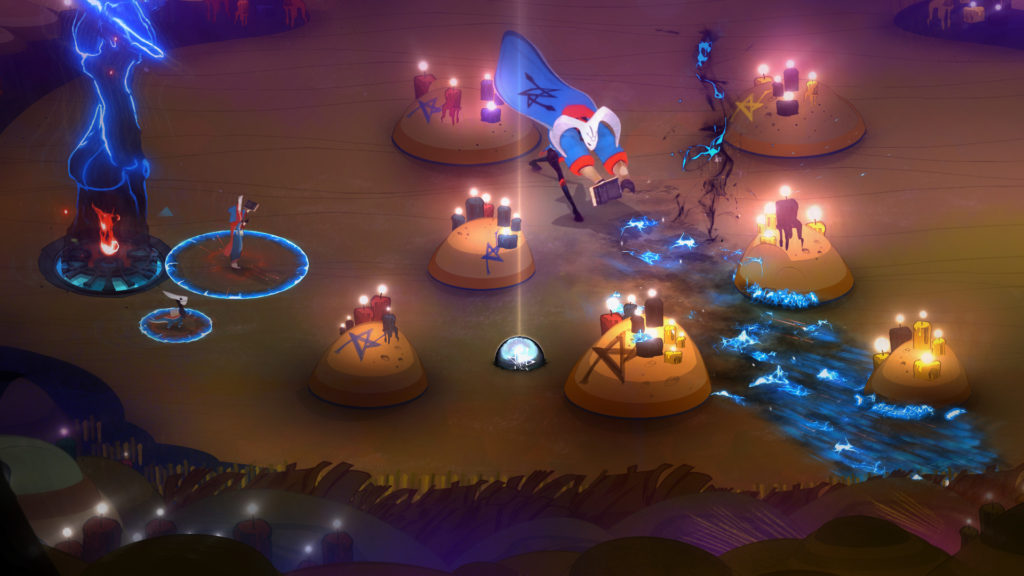 When characters participate in rites they earn Enlightenment which is the main way of leveling characters up. This enlightenment is earned even if your team doesn’t win but bonuses are given for winning. Any character who doesn’t participate in a rite will instead earn Inspiration which increases the rate at which they earn Enlightenment when they do participate. At first, I tried to keep everyone even, but after a while, I decided to focus a bit more so I could get their skills faster. There didn’t really seem to be a right or wrong way to go about doing this and just matters how you choose to go about things. One important thing to note is a character can only be selected for liberation after they have attained a certain amount of enlightenment.

When a character reaches high enough level (seemed to be shortly after attaining level three) their Scribe Trial becomes available. These trials are specialized for each character and pit them alone against three opponents who play to the character’s weaknesses. For example, a character who is slow moving would find themselves up against fast moving opponents. I really enjoyed these trials because they often forced me to use the characters in more creative ways and to think more strategically than I generally needed to. If the trial is failed it can be retried as many times as it takes whenever you have the option to go to your wagon. Defeating these yields a powerful talisman specialized for the character who completed the trial.

One other thing which surprised me is there are a few ways in which a character might become ineligible for a rite for a limited amount of time. One way is through the story a character might become sick and unable to participate. Another way is occasionally a character or characters might get banishment sickness and need to sit out. At first, I thought banishment sickness was the result of using one character too much but later three characters got it at the same time even though I hadn’t used them multiple times. Also, another character who I constantly used never got it. It is possible it results from getting banished during a fight too much because the character I used consistently without getting banishment sickness also had a talisman which prevented he from being banished when she went into the fire with the orb. 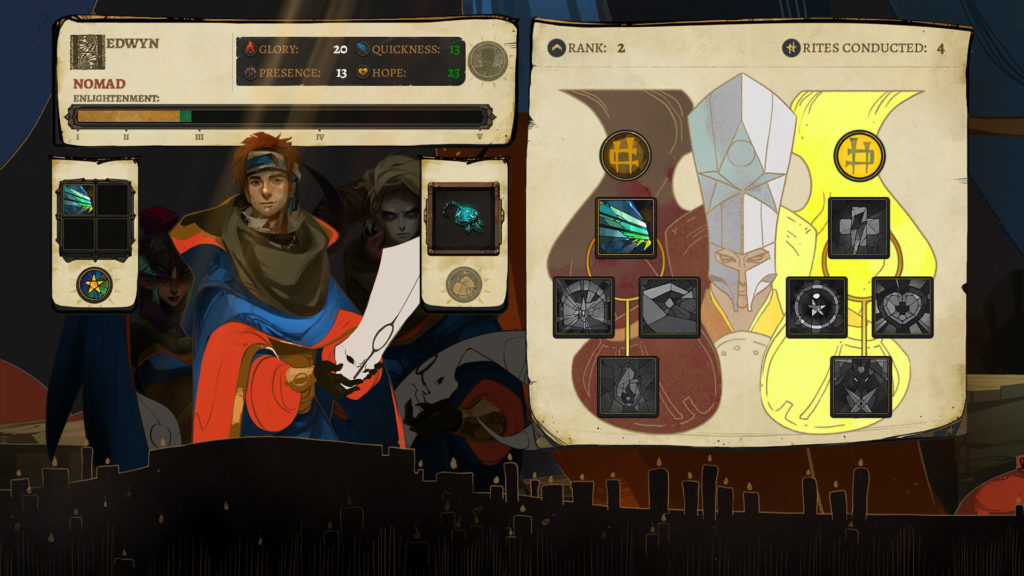 There are occasional moments of downtime during the game where I had the opportunity to work on three vocations: Foraging, Studying, and Mentoring. With foraging, you basically wander around and look for valuable items which can be sold to the Slugmart. I found this useful early in the game but later it was less useful; though I also sold everything I didn’t need which helped keep me flush with coin throughout the game. Studying involves reading more of the book of Rites and the benefit here is it grants a bonus to various stats for every character. Mentoring a character is an ideal way to help any character who might have fallen behind on Enlightenment catch-up a bit.

There is a ridiculous amount of choices which I had to make during this game and nearly all of them had a direct effect on how things played out. Of course, no choice is more important than choosing who you’ll set free and when because it not only affects the outcome of the game but it also immediately affects your options for proceeding. Losing a rite isn’t game ending but it does come with some real costs, especially if you lose a Liberation Rite. Because of all of these variables Pyre has a really high replayability value. 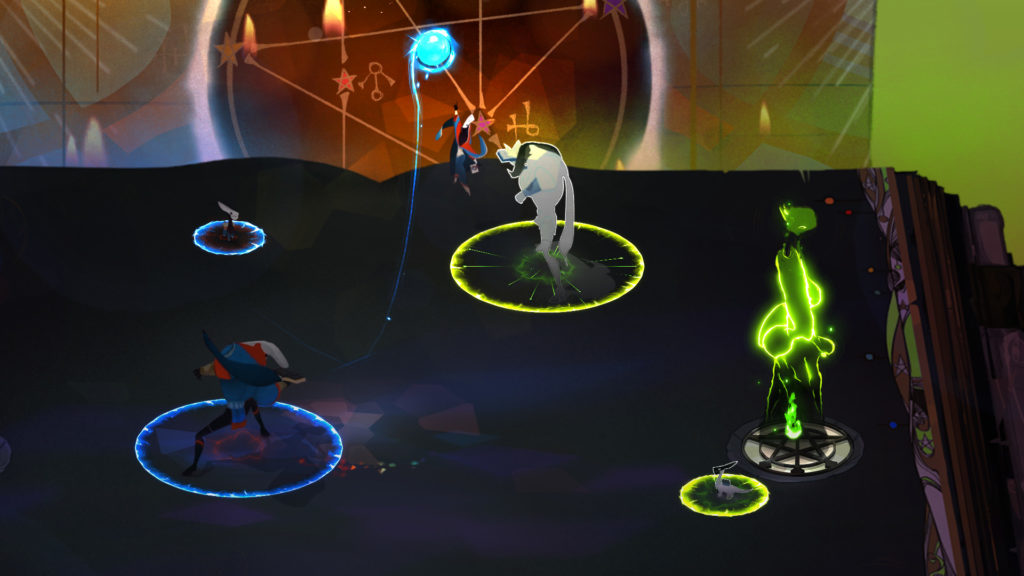 As far as the story goes it’s honestly the best story Supergiant has told thus far. Every single the character was interesting, well done, and I thoroughly enjoyed getting to know all of them, even my opponents. It was interesting to see how well tonality and emotion was expressed through facial animation and gibberish auditory dialogue. Essentially the VO for most of the characters was gibberish, but they managed to convey the emotions behind everything very clearly.

I also must give special mention to The Voice who is the commentator during the rites. The thing to know about The Voice is he doesn’t want you to succeed at your larger goal, but he is duty bound to carry out the results of the Rites. As a result, there is a great amount of push and pull with him as I succeeded time after time he became more and more frustrated and snarky. The writing and VO for the Voice was a real joy to behold.

Overall Pyre was a ton of fun to play, and I honestly believe its Supergiant’s best game thus far. Yes, I know Transistor and Bastion were great games. I loved them too. Looking back at this point I can see a clear progression From Bastion to Transistor, to Pyre and this is not only the best story they have told but it is also most well-executed game on all fronts. For anyone who enjoys party based RPGs, this is one game you really shouldn’t pass up.

Note: Our review was performed on PC with a code provided by PR for Supergiant. 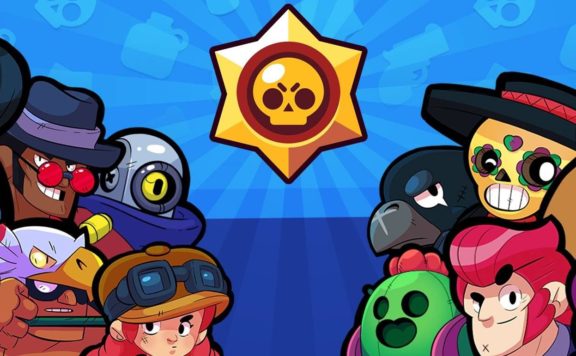 Pyre is a party-based RPG in which you lead a band of exiles to freedom spread across a vast, mystical purgatory. Who will return to glory, and who will remain in exile to the end of their days? The game comes to us from the team behind the critically acclaimed Transistor. It features a 3v3 turn-based battle system. No two games will play the same as the story continues whether the battle is won or lost. On the more technical front, Pyre allows players to use controllers or mouse / keyboard combinations with totally customizable controls for PC users. In addition, players can enjoy 4K ultra HD graphics. Lastly, local "versus mode" is available for those who want to best their friends in one of the game's fast-paced ritual showdowns.
0
Average User Rating
0 votes
Have Your Say!
Your Rating: 0
Submit
Write A Review
Genre:Action, Indie, RPG
Rating:Everyone
Developed By:Supergiant Games
Publisher:Supergiant Games
Modes:Local Multiplayer, Single-player
Engine:Unknown