Super Cane Magic Zero is out now and available on Nintendo Switch, PlayStation 4, and PC. It is a collaborative effort and brings a distinctly oddball style thanks to Italy’s Studio Evil and popular Youtuber Simone “Sio” Albrigi. It is Sio’s influence that is immediately obvious from the moment Super Cane Magic Zero loads. The 2D cartoon animation that bursts onto the screen is immediately recognizable as Sio’s work. The bright basic colors, thick haphazard lines, and odd stick figure creatures that waddle around the world are consistent with the work that fills his Youtube channel. It sets the tone for the whole experience and is not the only thing that is out of the ordinary about Supre Cane Magic Zero.

This dungeon crawling experience is set in a surreal world where a magic dog has set to work turning logic to spaghetti. What might once have been unremarkable factories of public parks are now weird and wonderful places to explore. Waking with no memory and strewn across the middle of a cakey looking crater, players open the story of Super cane Magic Zero as one of 18 playable characters, each with their own particular class. The story mode proceeds to descend into a world with pumpkin farmers, talking baked goods, and mysterious dungeons. Let’s be clear, Super Cane Magic Zero stands apart from the moment you load into an adventure. The deliberately infantile aesthetic borders on something like a top-down doodle crossed with an ARPG adventure that would fit perfectly on the Nintendo DS. It isn’t taxing but it perfectly accommodates the unbelievable world that you are about to enter. 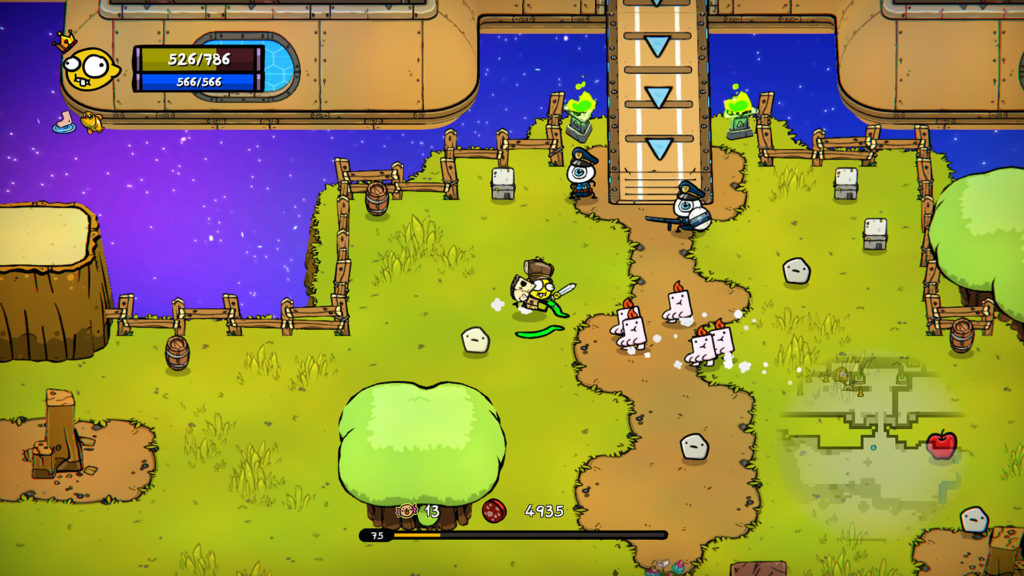 While the presentation of Super Cane magic Zero might seem a bit on the eccentric side, much of the game is clearly still an ARPG. Picking up a controller or keyboard, up to 4 players can enter Sio’s creation and fight their way through a story that pushes players around a series of dungeons. Picking from a range of classes, players start off the game with their own basic set of stats and unique magical ability. Bakers, Influencers, Wizards, and Plumbers all make for a different twist on the traditional Barbarian or Knight. Progressing in any of the locations that make up Super Cane Magic Zero allows players to level up and dive into a number of unusual progression trees. Dormancy, Candygenesis, and Astral Origins allow players to enhance their abilities with upgrades like Space Jam and Coffee Ice Cream. These systems enhance characters with a range of quite clear stat and skill boosts, despite the weird naming conventions. Upgrade systems like these feel like an adequate reward for time invested in this sugar-coated world, 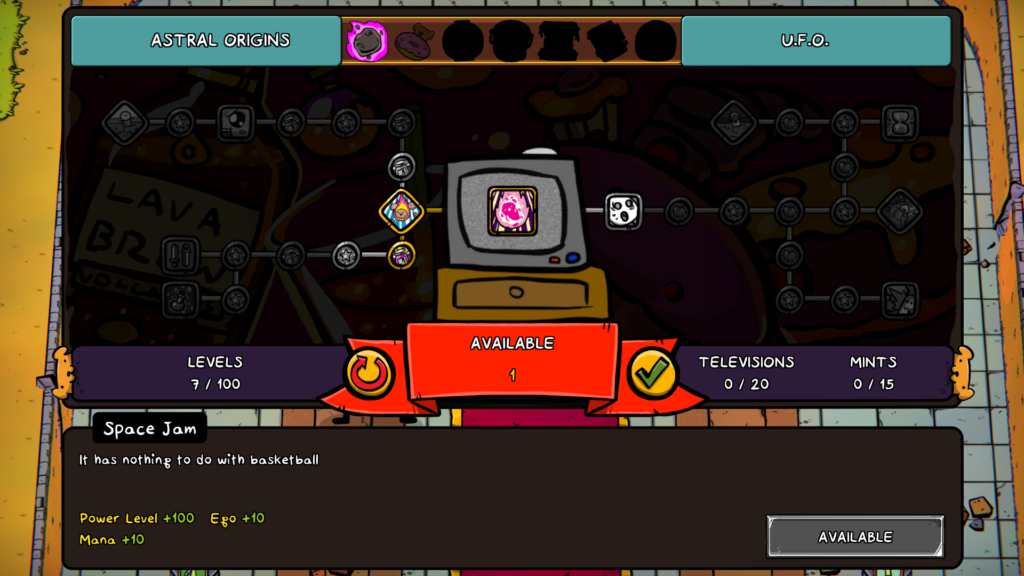 Progression trees are not the only system that you might have seen before. Crashing through the darkest of dungeons allows players to loot or trade for equipment upgrades. A fully flexible system could find any class wielding a stick, sword, gun, or a pair of fancy pants. Everything from accessories to the sharp end of your wooden sword are open to loot and use. This is an adequate accompaniment to the game’s progression and upgrade system, giving players the greatest flexibility in how to build a unique character.

Despite the malleable approach to gear, upgrade and gear systems feel unwieldy as players ease into their adventure and decipher what exactly is going to work best. However, Super Cane Magic Zero isn’t the sort of game you will ever need to min-max in to get by. In fact, most of the time encounters are simple enough to allow adventurers to play their own way. If you’d rather grab a magic scepter or a melee weapon then running around the open world or delving into an instanced dungeon is generally an intuitive experience. Controls do not take much to get used to and the games, mix of petty melee and ranged mobs never gets too overwhelming. Even during the odd boss fight, the handcrafted experiences that lie in wait for players are only at their most difficult when trying to get the joke that is lost in translation.

If you do find things getting a bit much then Super Cane Magic Zero is full of power-ups and potential pitfalls to stick ion your mouth. In one of the more off the wall additions to this title, players will find a whole host of edible options strewn around the world. These are used to provide extra hp, mana replenishment, and sometimes power-ups. Various other objects are also on offer that can explode, knock out enemies, and cause other debilitating effects. Just like in the real world you can ingest all of these. Also just like in real life, if you stick something in your mouth you’re not supposed to then there are likely going to be some ill effect. Just, don’t eat the fire.

While the story campaign makes up a good 20 hours of content, co-op arena content is where Super Cane Magic Zero really shines. Eight arenas are available to play around in, challenging up to 4 other players to blast, lob, and much your way to victory. While the rules of each arena very mildly and the end goal is consistently simple, I found the constrained maps and cartoon aesthetic to be reminiscent of a less chaotic Duck Game. 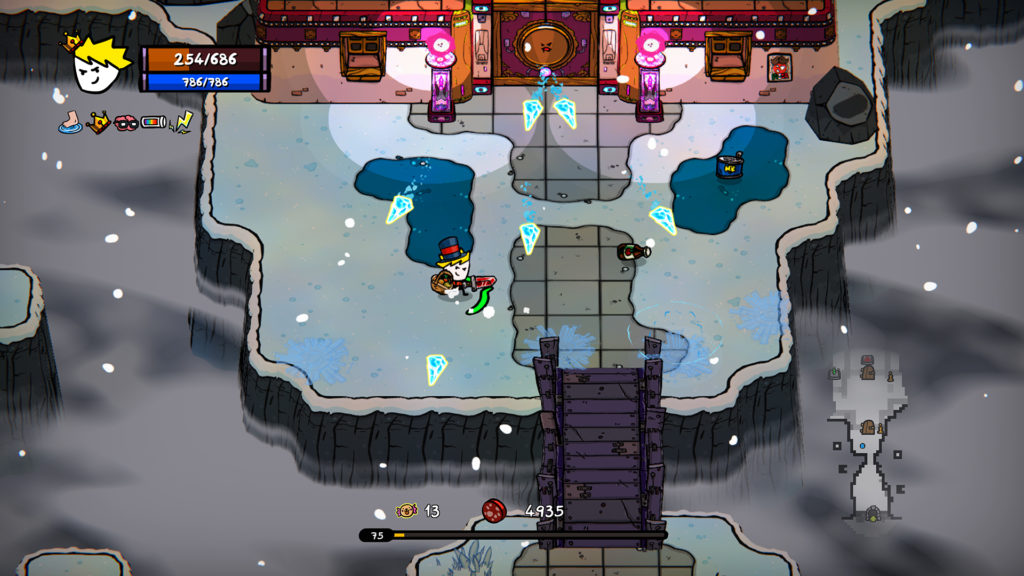 Local co-op arenas work well in Super Cane Magic Zero due to the simplicity of the content and this is true for most of the game. The attraction of the game’s aesthetic is mostly because it is bright and oddball. Combat is not particularly taxing, and the character customization all makes some sort of fundamental sense. Where Super Cane MAgic Zero starts to fall down is the absolute insistence on being quirky. For some players, the jokes and odd narrative approach will work wonders. Players like me will find that trying to work out the reason behind a particular character’s status or what my direction is, just frustrating. The naming conventions for weapons, worlds, and progression skills make little sense. While that random chaos is firmly rooted in its own world, I would still generally tend towards something like Pathfinder Kingmaker, where lore is consistent. Super Cane Magic Zero tries hard and for some gamers, the jokes are going to be utterly lost in translation.

That said, Super Cane Magic Zero is fun. It is bright, bold, mostly an engaging attempt at doing something different. If you like the oddball work of Sio then you’ll love this. Do bear in mind that most of the game is hand crafted so there is not a ton of replay value in it. This is in comparison to something like Double Fine’s upcoming RAD which is entirely procedural and distinctly different in its own right. If you want something that is filled with more cheer than a chest full of dank dungeon loot then Super Cane Magic Zero could be for you. Super Cane Magic Zero is out now on PlayStation Store, Nintendo eShop, and is available on PC via the Steam and Humble stores. 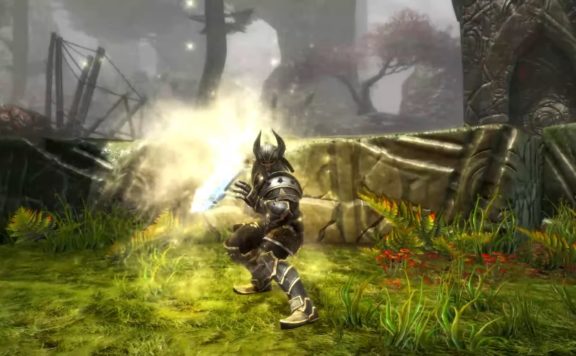 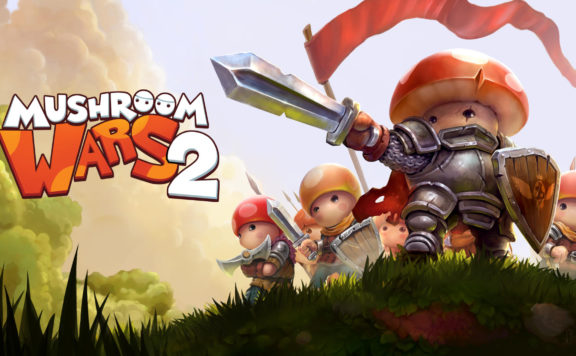 Multiplayer ARPGs like Super Cane Magic Zero are far from a new experience and standing out among the torrent of Diablo clones is certainly not easy. So, it was with some trepidation that I stepped into Super Cane Magic Zero to take on one ...
0
Average User Rating
0 votes
Have Your Say!
Your Rating: 0
Submit
Write A Review