Mario + Rabbids: Kingdom Battle shouldn’t be this good. It takes Mario, gives him and his comrades high tech guns and bombs, and pits them against raging Rabbids – creatures who are the videogame equivalent of the Minions from Despicable Me. You either love them or you hate them, there is no middle ground. And yet, here I am on review day ready to preach to you that not only is Mario + Rabbids a great game, it’s probably one of the best crossovers between two very different IPs in a long time. Mario + Rabbids: Kingdom Battle is best described as XCOM for Everyone, and it’s a joy to play – plain and simple.

The story doesn’t matter that much, truth be told. When has the story in any Mario or Rayman game really mattered? But as a glue to pull these two divergent universes together it’s both charming and cute. A brilliant young gamer scientist is working on a device that will be able to combine any two objects. It’s not ready though and keeps short circuiting.  When she leaves her desk unattended one night, the Rabbids arrive in their interdimensional washing machine, steal the device, and use it to combine themselves with the Mushroom Kingdom. 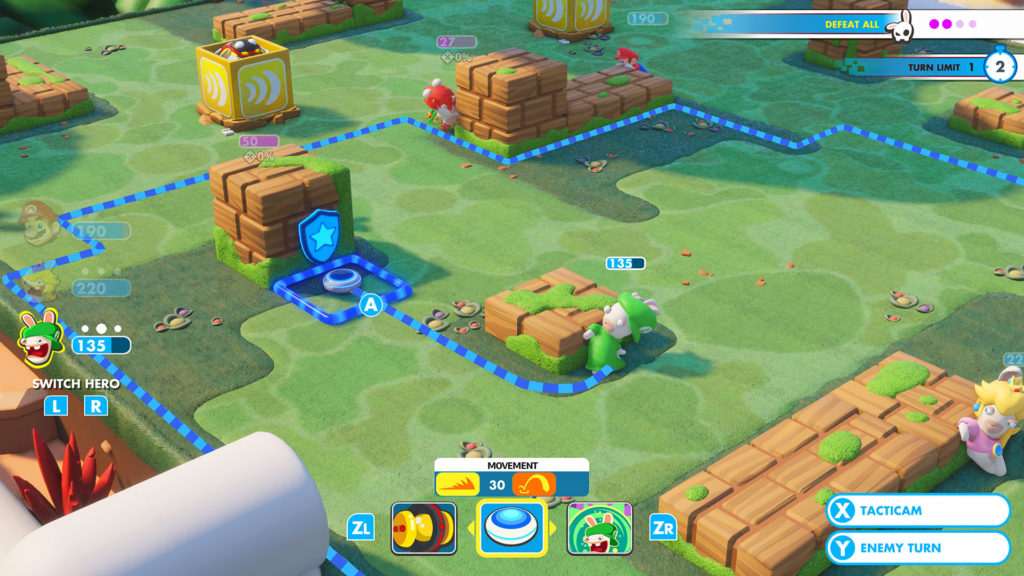 Of course, this is where Mario is recruited to lend a hand, along with the AI of said young Scientist (a Roomba with bunny ears). Oh, and two Rabbid + Mario characters – Rabbid Luigi and Rabbid Peach. As you work your way through the Kingdom, you’ll face tons of maniacal Rabbids, some combined with other Nintendo characters (our writer Rob Lashley is fond of Rabbid Kong), some combined with nature, as there’s one Rabbid that somehow fused with the matter combining device itself and he’s now unwittingly tearing through the Mushroom Kingdom wrecking havoc. It’s your job to find Spawny and stop him before the entire Kingdom is destroyed by this massive glitch.

It’s such a simple and brilliant idea. Take one of the greatest games in recent memory, an admittedly hardcore experience, adorn it with Mario and the Rabbids, and make it more accessible to the masses. This is Kingdom Battle, in a nutshell. The use of cover, vantage points, the line of sight, special skills, RPG leveling, and customization – it’s all there. There’s even a home base, Peach’s Castle, where you can go rest, play co-op, test out weapons, view art and other collectibles, and take a breather from the levels. But, Kingdom Battle isn’t a procedural game. Like all Mario games, its levels are designed deliberately. The familiar World 1, Chapter 1 lineup is here (1-2,1-3,1-4, and so on), and you can go back later and play each level to try and get better results and uncover secrets that were previously blocked because you were missing some power or skill.

Mario + Rabbids can still be difficult but not nearly to the extent of XCOM. Mario and his partners in heroism don’t die. They can get knocked out, but are always revived at the end of a level or if you use the “Easy Mode” before each fight which refills health and resurrects knocked out characters. The beauty of this is that Mario + Rabbids doesn’t punish a player for wanting an easier time. You get more health, but the fights are the same. The enemies still hit hard, and often outthink you – yes, Rabbids can be smart in this one. But by giving the player more health and letting them hit a little harder, the burden of death is mostly removed from the player. You can be free to just play, let your kids help, and enjoy the ride. 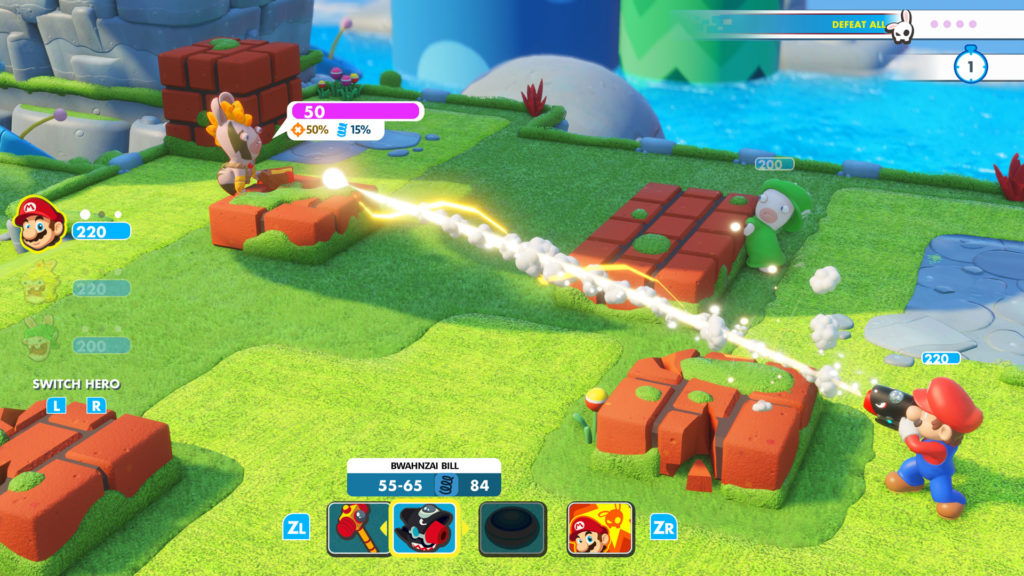 REMINISCENT OF A CLASSIC

In some ways, not only does Mario + Rabbids remind me of XCOM (that’s an obvious influence), but it reminds me of the Super Mario RPG from Squaresoft on the SNES. It’s got the same undeniable charm, the bravery of trying new things with an old hero, and the end result is also the same – this is a helluva a fun game. I felt the same way when Mario& Luigi Superstar Saga debuted on the Gameboy Advance. I felt the same when I first tried Mario Kart, or Paper Mario. What seems like a game that shouldn’t be fun somehow always is when Mario’s involved.

The care put into the recreation of the Mushroom Kingdom and the effort that went into each level’s design is top notch. Cinematics are brilliant and charming, boss fights have unique mechanics and are challenging, and just when you think the game’s fights have gotten stale they introduce something new like a tornado or a new rabbid combatant to keep things interesting. There’s so much content here, too. Loads of replay value, a fun co-op mode, and lots for completionists to go after. Will I replay the main story through again? Probably not. There’s no randomness to it like there is with XCOM, and the lack of permadeath, oddly, makes defeat feel a little too trivial. But this is at the cost of a cast of characters that make sense and fit in the world. You can’t very well have tons of generic soldiers running about a game that’s supposed to be about Mario.

Still, the sense of progression and power increase you get from new skills or buying new weapons is huge, and as the story unfolded, I genuinely found myself smiling from the hijinks. There was a spark through E3 when this game was unveiled. Its rampant praise caused the creative director to tear up and become a meme. Let me tell you, the hype is real. Nintendo, as always, in a sea of dark and gritty games reminds us that purely aiming for fun can be enough. Mario + Rabbids: Kingdom Battle is a testament to fun, wrapped around a game filled with depth and creativity.

If you own a Nintendo Switch, you want this game, period. I didn’t know I wanted this mashup, but now that we have it, I can’t wait for the DLC, and I definitely want sequels. 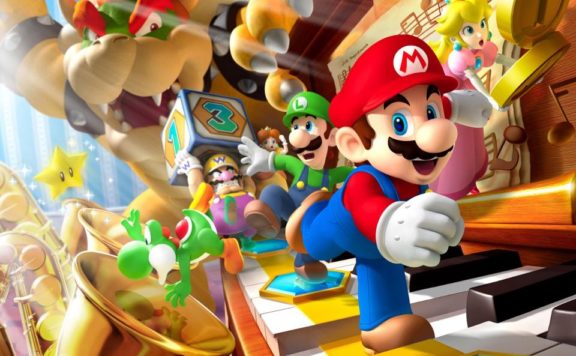 Mario and his friends will use hundreds of never-before-seen weapons to strategically take out enemies in true Rabbids style – with the occasional well-timed misfire. Players will use turn-based combat to strategically move their heroes across the battlefield to gain higher ground, utilize the pipe system and destructible environments, and receive a friendly boost from their teammates to get into their optimal firing position. Utilizing combat tactics and the cover system, players will explore the four unique worlds with their team of heroes defeating foes, gathering collectibles and solving puzzles along their quest. In the main campaign for Mario + Rabbids Kingdom Battle, players will form a team of three unique characters, customizing their abilities via each character’s dedicated skill tree to form the perfect trio. In the game’s additional co-op challenges, players team up with a friend in local multiplayer, where they’ll play three levels of difficulty, taking on adversaries as a team. Mario + Rabbids Kingdom Battle will take advantage of the ability of Nintendo Switch to be played anywhere, anytime and is fully functioning on the go for both solo and co-op players.
9.1
Average User Rating
3 votes
Have Your Say!
Your Rating: 0
Submit
Write A Review
Genre:Adventure, RPG, Strategy
Rating:Everyone
Developed By:Ubisoft
Publisher:Ubisoft
Modes:Co-op, Local Multiplayer, Single-player