After spending last week playing the demo of Nine Parchments by Frozenbyte I was quite excited to be given a copy for review Monday. After spending every spare moment huddled over my Switch wielding a variety of staves, casting incredible spells, and traversing the lushish world surrounding the Astral Academy over the last couple of days I am finally ready to share my thoughts on This co-op isometric twin-stick shooter. So grab that coffee, kick back and enjoy our Nine Parchments review on the Nintendo Switch from Frozenbyte.

Set in the world as the Trine series, Nine Parchments follows a group of flunking students of the Astral Academy who, in a last-ditch effort to bring up their grades, set out on a quest to retrieve the nine pages of a power spellbook that have been scattered all over the kingdom. Armed with your wit and a few basic spells you set out either alone or with up to four people on an adventure that sees you venture into the dangerous wilderness.

The game world itself carries many of the vibrant colors and design that made the Trine series so beautiful and it works well here in this setting. The isometric viewpoint harkens back to some of Frozenbyte’s earlier entries and looks and feels great to play in. Offering some beautiful vistas and interesting level design Nine presents a beautiful, layered world. 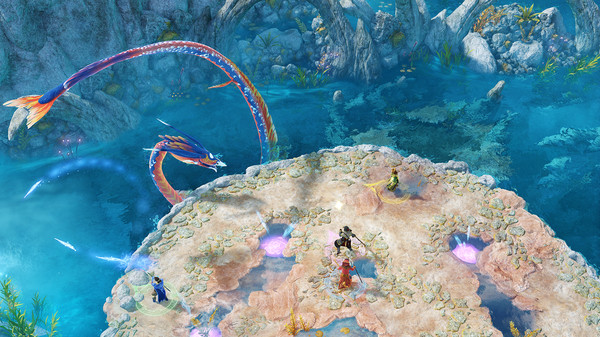 Combat is handled like most twin-stick shooters, with the Switches analog sticks feeling tight and smooth while casting and blasting the enemies on screen. The bumpers allow for quick rotation of your spells and a nice elemental spell system force you to switch through your arsenal regularly in order to take on the next challenge. Combat in single player feels solid and rewarding as you dash, dodge and dive your way out of enemy fire while throwing your own fireballs, ice beams and lightning spells back.

Multiplayer adds a much more chaotic and challenging experience as your spells can and will hurt your friends if miss fired. This was a bit of a challenge when first jumping into the fray with friends as communication became paramount do survival. However, after some coordination and timing, we found a great rhythm to our combat.

Interestingly I found that the game felt dramatically different between the single player and multiplayer experience. Single player was good, but alone the levels began to feel a bit repetitive. However, when I played with friends the game took on a whole new feeling. It was engaging, challenging and seemed to offer a more enjoyable experience. 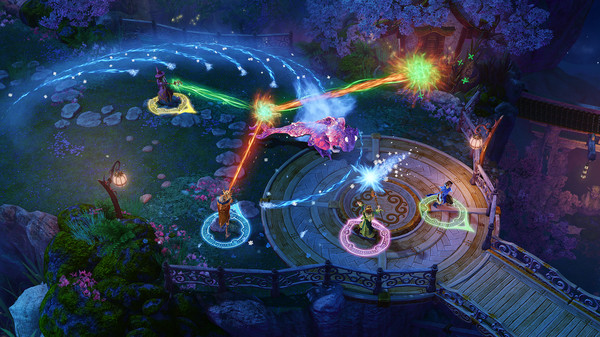 As with the aforementioned Trine series the game excels at creating an excellent co-op experience, with each wizard adding his or her own spells to the mix. The students (or at least the ones I had unlocked at the time of writing) worked really well together. This became especially important early on when each student only has their starter spells. Having the added bonus of another player with an entirely different set of spells offered a wider range of ways to fend off and defeat enemies and bosses.

Progression in Nine Parchments is a straightforward affair with each level offering another point to be spent on a passive skill tree. As you progress through the levels you will be rewarded with scrolls that allow you to learn another spell that is added to your active spells list. In game collectibles in the forms of hats and staves (both equipped with stats) offer another layer of customization and personalization to your character. New characters are unlocked through discovery, challenging feats and collection which definitely creates an opportunity for replay. 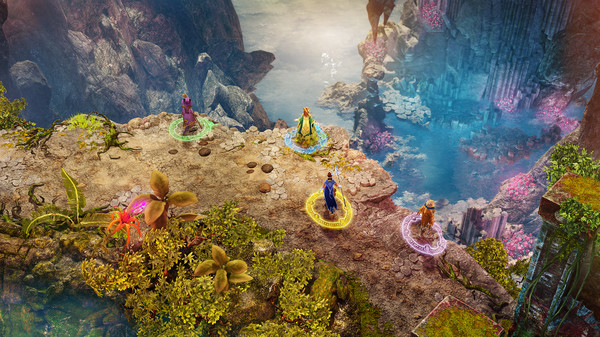 Nine Parchments is a solid twin-stick, isometric, Action RPG with some great multiplayer fun. As a single player title, it does begin to feel a bit repetitive but this is offset by the exceptionally fun multiplayer. If you own a Switch or PC, or other console and are looking for something to scratch that twin-stick shooter itch but with a magical twist, Nine Parchments is definitely worth checking out.