Not very long ago, I took an early look at Closers, a modern approach to side-scrolling beat ‘em ups. It melds a massively multiplayer RPG and some engaging systems to innovate on a well-worn model. So, when Phantom Breakers Battle Ground: Overdrive arrived on the Nintendo Switch, I was curious to see if this retro spin-off still has anything left to offer. This is our Phantom Breaker Battle Grounds Overdrive review for the Nintendo Switch.

Phantom Breakers Battle Ground Overdrive, is a spin-off from the 2011 Phantom Breakers beat ‘em up. Already available on Xbox arcade, PC, and PS Vita, as Phantom Breakers Battle Ground, it takes characters from the 2011 and 2013 2D arena fighter, strips them down to 16-bit glory and throws them onto the mean Tokyo streets. This is a side-scrolling adventure, clearly inspired by classic arcade beat ‘em ups, pushing players through a variety of bright city backdrops as a variety of colorful enemies and boss battles block their path.

Developer 5pb has regressed from the high definition perspectives of the Xbox 360’s arena fighter and opted for a more retro aesthetic with this particular entry in the franchise. Overdrive is a bright 16-bit love letter to a bygone era of arcade machines with a crunchy chiptune soundtrack. Takeshi Abo’s soundtrack, is an appropriately nostalgic accompaniment, including a PSG soundtrack option, while still making use of the Nintendo Switch’s modern hardware. Despite squeezing into a more diminutive package than its arcade predecessors, Overdrive still looks fantastic. The Nintendo Switch’s 720p screen easily handles the bold graphics as a torrent of dancing cat boys teeters menacingly towards players. 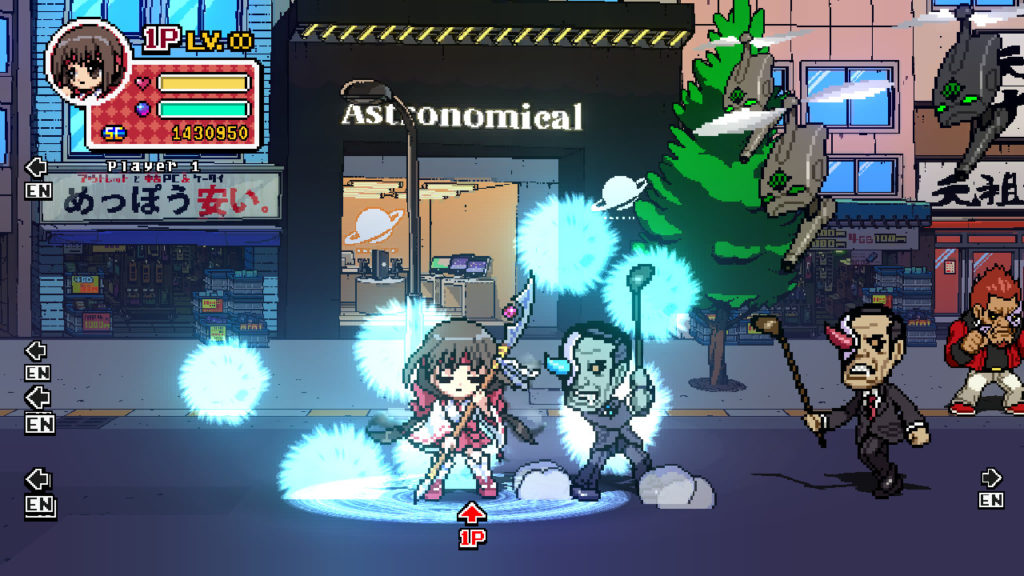 Each of the available avatars is equally fitting, transposing Mikoto, Waka, Itsuki, and Yuzuha from the original Phantom Breakers Battleground and adding two playable characters, previously locked behind DLC content. Despite this limited roster, each of these does contribute a unique fighting style to skirmishes, from close range brawling to nippy assassins. Mikoto, Waka, Itsuki, Yuzuha, Kurisu, and Frau are all easy to get to grips with. While studios like Platinum provide an incredulous amount of combos to memorize, an overwhelming number of bonuses, and challenging achievements, Overdrive has a limited, if solid, set of moves that do not fundamentally change much between characters. Light and heavy attacks, blocking, and super moves are all triggered using the same set of keys, making Overdrive easy to just pick up and play. Characters do begin to diversify with the game’s progression model. In an effort to add more value to this title, Overdrive includes a character progression system. It is an extremely simplified version of something like En Masse’s Closers, providing access to a limited skill tree and some basic stats. After the closing moments of particular levels, players can exchange exp for stat points or skill enhancements, such as double just and dash attacks. The skill system, in particular, feels successful in adding depth to the game’s heroines, elevating it above plain mediocrity. Still, despite these power enhancements I did come across a few issues and had to ask for some help from a friend.

The Nintendo Switch excels at local co-operative play, and Overdrive makes excellent use of its ability to bring people together. Breaking off the two Joycon controllers allows additional players assist with the onslaught of enemies, with up to four players supported at any one time. Adding more players to the screen can get a little disconcerting as super moves blaze across the screen and avatars get lost in a forest of appendages. Overdrive also ratchets up the difficulty in response to new players, but one of the fundamental joys of the Nintendo Switch is playing together and Overdrive utilizes that feature to its fullest when playing the title’s co-operative and battleground modes. While co-operative mode pushes players through the game’s story, battleground drops up to four friends into an arena, in a battle for glory. 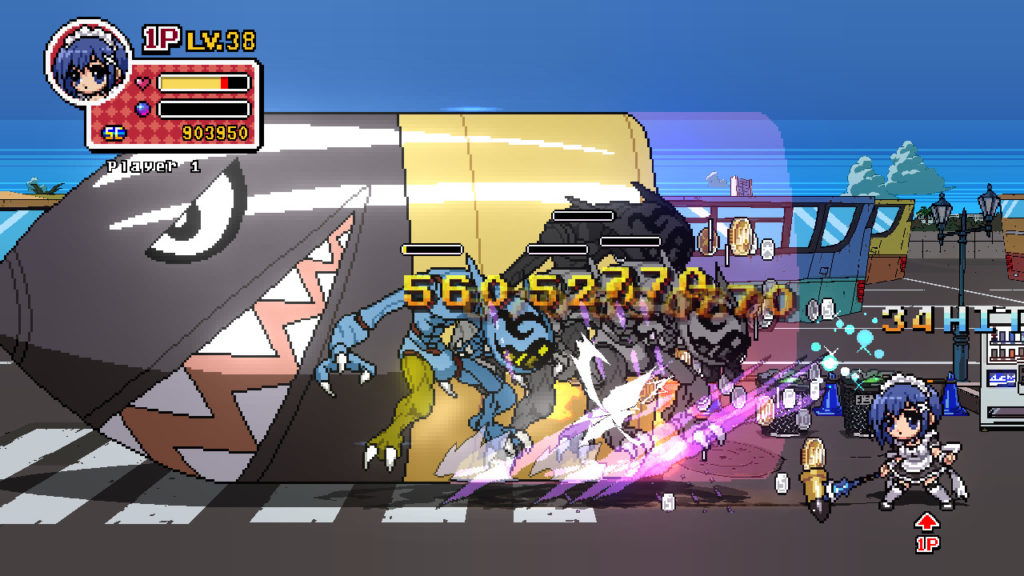 Try not to be too smug though, it is highly likely that you will need that helping hand to get into Overdrive. Content that initially seems inviting and frivolous takes a decidedly difficult turn, with very little warning. Cheesing your way through a blistering array of flashy animations and trash mobs comes to an abrupt halt as boss encounters begin. While boss battles are intentionally challenging, I encountered a very imposing learning curve. On normal modes, boss AI is far more competent than new players and their design does not generally provide a sense of progression, using phases for example. Players trying to get into this game for the first time will find the change in difficulty distinctly off-putting and likely resort to grinding levels until they are able to simply overpower their objectives.

Providing difficult challenges is entirely reasonable, but this is where Overdrive becomes wildly problematic. Nostalgia can only elevate so many issues, and modern players are used to a slightly more sophisticated experience.  The nostalgic audio and pixel art are all fitting but do not offset the ill-judged difficulty or repetitive nature of the game. Phantom Breakers Battle Ground is charming and has potential, but after experiencing a modern interpretation of this genre, I can’t help feel that a little more work on balancing the game and expanding its progression would have made this a game with a much wider appeal.