After almost complete silence since Gamescom 2013, Tequila Works seem to be on a creative flourish of late. Hot on the heels of unveiling Rime at EGX Rezzed, their latest title has just arrived on PC, Playstation 4, and Xbox One. The Sexy Brutale is a point and click murder mystery, developed by Cavalier Studios and Tequila Works, featuring time travel, masked villains, and a propensity for voyeurism. This is our The Sexy Brutale Review.

Players start out The Sexy Brutale a little dazed and confused. Woken by the chime of a nearby clock, players inhabit the role of Lafcadio Boone, an ageing priest who seems to be an unexpected arrival at the enigmatic Marquis masked ball. Players are swiftly presented with a broken stopwatch, a quick tutorial, and a series of bloody murders. Your goal is not to solve these murders, as you might expect, but rather to stop them from occurring in the first place. What follows is mad dash across an exquisite mansion, intrigue, spying, and occasional meddling with the furnishings, before time catches up with you and the entire day resets.

Like Rime, the artistic direction in The Sexy Brutale is striking. From the opening moments stepping through the entrance to the titular casino to exploring the quirky guest rooms and secret passages, The Sexy Brutale paints the Marquis’s grand casino mansion in a bright, eccentric, but knowingly dark visage. Music equally reflects this with a jaunty tune that seems to be inspired by 1920s jazz Americana. This successfully manages to create a sense of opulence while still calling back to the mysteries and superstitions of the deep south. 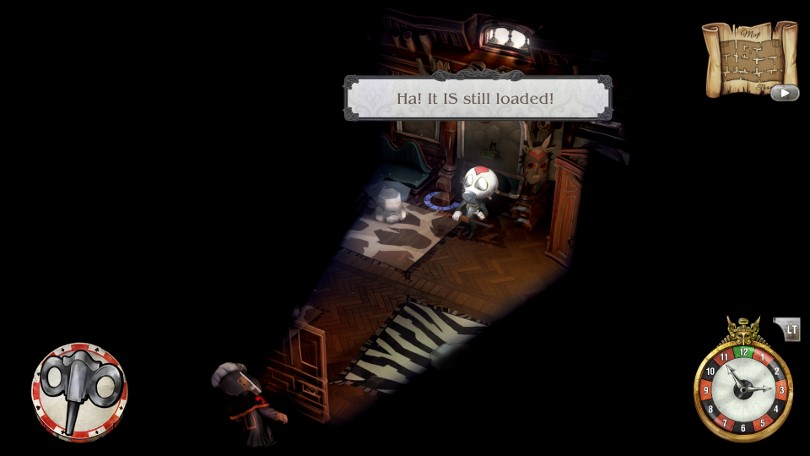 Character design is just as impressive, with each of the Brutale’s guests sporting their own distinctive theme, backstory, mask, and untimely death. Willow Blue’s macabre painting, skull mask, voodoo facade probably features as one of my own favorites. A total of ten characters are dispatched by the maniacal staff, some of which it is necessary to save at the same time, and every one of these deaths is a joy to behold. Tequila Belle’s murder at the hands of a psychotic pianist is worth watching through at least once for her performance alone.

Thankfully, this act of voyeurism is a fundamental part of The Sexy Brutale. Where other point and click adventures distill the experience down into a clicking marathon in order to uncover their mysteries, The Sexy Brutale encourages players to simply follow the victim, restart the day, and solve the necessary puzzles. Players can tail guests, listen in on conversations and peer through keyholes to uncover clues. Putting that into action and saving the day does, however, take some precise planning. The masks worn by staff and guests make direct intervention impossible for the central character. Intrude upon a guest or mansion staff and their mask will float off and chase you from the scene of the crime.. While this doesn’t present any impending threat to players, these masks can eventually kill you, and the conceit works well enough as it forces  players to watch the results of their handy-work unfold from the shadows.

Upon saving each potential victim, the game rewards players with that character’s mask. Collecting these masks imbues Lafcadio with a collection of abilities, that compliment the design of the victim’s mask. Some will enhance player’s ability to contort time, some will let players talk to ghosts, and others improve the central character’s hearing. These abilities are not just useful additions, they tend to be vital to preventing further bloodshed, usually the next victim’s blood. 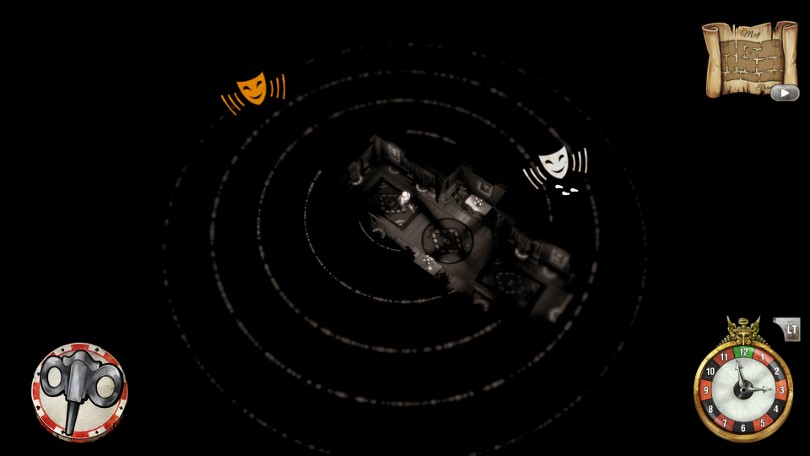 It is this tightly scripted arrangement of opportunity and ability that helps to make puzzles in The Sexy Brutale feel completely natural. Tthe game’s inaugural puzzle involves an old shotgun and a blank cartridge, which players must find and load into the chamber before it is used. Items, like mask abilities, tend to have a very specific use. The game does not blind players with an unnecessary array of options or fill inventories with useless trash. Unfortunately, these items are lost when a day resets, although Lafcadio does manage to retain everything he learns, meaning security codes and information obtained remain available. This presents a satisfying series of solutions, some of which only reveal themselves as characters react to a player’s intervention. Successfully scurrying in behind a victim to grab an item that just became crucial proved to be one of my highlights of this all too short encounter.

After just a few hours of gameplay I reached the conclusion of The Sexy Brutale, and its briefness is possibly my only possible complaint. The game is fantastic in so many ways  with a solid ending that might feel jarring in other hands, yet I was left wanting more. By its very nature the incredibly tight scripting of real time events mean The Sexy Brutale has little replay value. Outside of a series of collectable playing cards and guest invites, there is not much else to do once player’s resolve the mystery of the Marquis Mansion.

Despite this minor frustration, I was utterly enthralled by The Sexy Brutale. The exaggerated characters and isometric art breathes a kind of life into point and click mysteries that leaves other members of the same genre feeling listless and two dimensional. Puzzles prove themselves to be entirely accessible for newcomers, and the script is just fantastic. Take a gamble. Try The Sexy Brutale and if the house wins, just go back and try again.

Welcome to the Mansion! All the guests are being murdered — horribly! — at this extravagant masquerade party set all across the sprawling and bizarre Sexy Brutale casino mansion.  Then at midnight, the clock re-winds and the grisly pantomime all plays out again in exactly the same way. You awake on the floor of one of the rooms wearing a mask with a bloody handprint across it. It protects you from the worst of the evil that lays across the mansion, but you can only watch, and spy, and try to learn each guest's secrets so you can save them from their bloody fate.
9.4
Average User Rating
1 vote
Have Your Say!
Your Rating: 0
Submit
Write A Review
Genre:Adventure, Puzzle
Rating:Teen
Developed By:Cavalier Game Studios
Publisher:Tequila Works
Modes:Single-player