I know hunters in real life that will take multiple trips to their preferred hunting grounds prior to hunting season to look for the perfect hunting spot. Then, on opening day, they wake long before sunrise to get into their chosen spot, only to wait for hours on end in the hopes that a big buck will come into view. Depending on individual skill, they will either come home with a kill, or more likely, a story of how they almost got the “big one.” the Hunter: Call of the Wild is your chance to experience that thrill. This is our Hunter: Call of the Wild review.

You will start off in one of two locales: the Layton Lake District in the Pacific Northwest, or the Hirschfelden Hunting Reserve in Europe. You will be able to freely switch between the two areas, so don’t spend too much time fretting over your choice. Wherever you decide to start, you will be equipped with a rifle, a basic scope, ammo, and deer calls.

The local ranger will be your audio guide throughout the story missions. The first few missions will take you through a sort of tutorial, teaching you the basic game mechanics. You will learn how to navigate the map, stalk your prey, and quickly get your first kill.  You will also be prompted to visit different areas of the map to discover lodges (quick travel points) and local points of interest, along with introducing you to the various animals you will be hunting.  Later missions will have you helping out the local inhabitants complete various tasks such as tracking animal movements or thinning the population of a species in a specific area. Each map comes with a separate story and all skills and items you acquire transfer with you between maps. 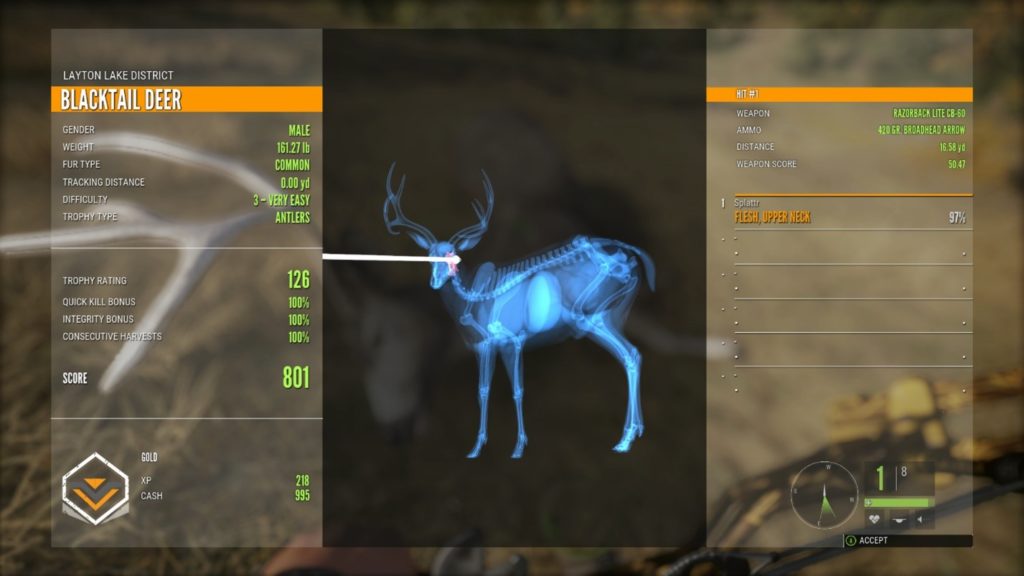 As noted above, you start with a basic rifle capable of taking down a deer with one well-placed shot. With the cash you earn, you will be able to purchase 4 weapon types: rifles, shotguns, handguns, and bows. Within each weapon type, you will be able to obtain more powerful variants to help with taking down larger game. To help you along in your endeavors you will also be able to purchase new scopes and ammo, as well as a variety of animal calls and scents. Real hunting enthusiasts can throw their hard-earned cash at hunting gear such as portable blinds, tents, multiple styles of camo, and even ATVs. Strangely missing is an oversized 4X4, duct tape, and trucker hats.

Your gear isn’t the only way to improve your hunting prowess. As you gain XP and level up, you will be able to improve your hunter’s abilities. At each level, you will be able to improve a skill or perk. Skills are focused on identifying and stalking your prey, while perks are centered around weapon use. Some of these are very useful, improving your aim or use with lures, for example, while some (I’m looking at you 15% health increase) seem to have less utility. Progression is slow, but you will notice a marked improvement in your abilities after just a few points.

“This is a hunting game, so enough with the fluff. How realistic is the hunt?” you may ask. Good question and I must say the game hits the mark, almost to a fault. Unlike many of the more arcade type hunting games out there, Hunter CotW does not just plop you down in an area full of creatures that you can just point and shoot at. You will be required to use real-life skills to take down trophy quality game. 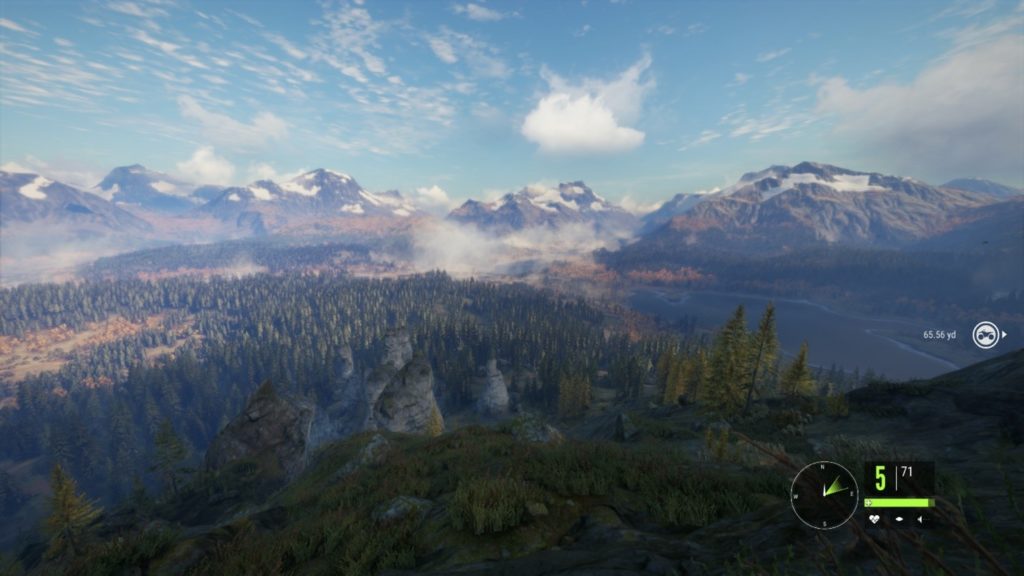 You have various cues to help you in finding your prey.  There are several visual indicators such as animal tracks and droppings. You will hear mating calls, as well as warning calls if an animal is alerted to your presence. As an animal approaches you will even hear their footsteps and the rustling of branches and bushes. To aid the novice hunter, many of these cues can be enhanced to make tracking easier. Tracks and droppings will have a glowing outline and a directional cone to help guide you to the next set, and the audio cues will have a visual aid to help identify the direction of origin. Expert hunters can leave the enhancements off, making tracking much more realistic.

You can start by randomly following tracks you come across, and they could possibly lead you to a kill. You can increase your odds of finding a target by checking the animal droppings to determine how recent the tracks are and watching wind direction to avoid detection. To get bigger or more elusive animals, you will need to incorporate more advanced tactics. You will need to locate rest, feeding, and watering areas for the animal you wish to hunt. Once you have found your hunting ground, you will need to find good cover, watch the wind, use the proper scent to mask your presence, and lure your prey in with a well-timed call. If you are lucky, you will be presented with a chance to take your shot. When you ready your shot you will need to take into account wind direction and distance to the target. Oh, and remember to aim for a vital area. With a little bit of practice, and a bit of luck, your shot will be on target, resulting in an instant kill. If not, be prepared to follow the blood trail.

Assuming you can find your kill, the game will score your harvest on several factors. Each animal will have a Trophy Rating which starts with a difficulty rating from 1 to 9 (based on size and general awareness relative to others of its species) and Trophy Type (antlers, horns, weight, etc). This base rating is multiplied by an Integrity Bonus, (use the appropriate weapon caliber for the size of the animal), a Quick Kill Bonus (decreases the longer a creature suffers before it dies), and a Consecutive Kill Bonus (increases with each successful harvest). The result is a score from 0 to 1000, which impacts your XP, cash, and rating (bronze, silver, gold, diamond) for the harvest. 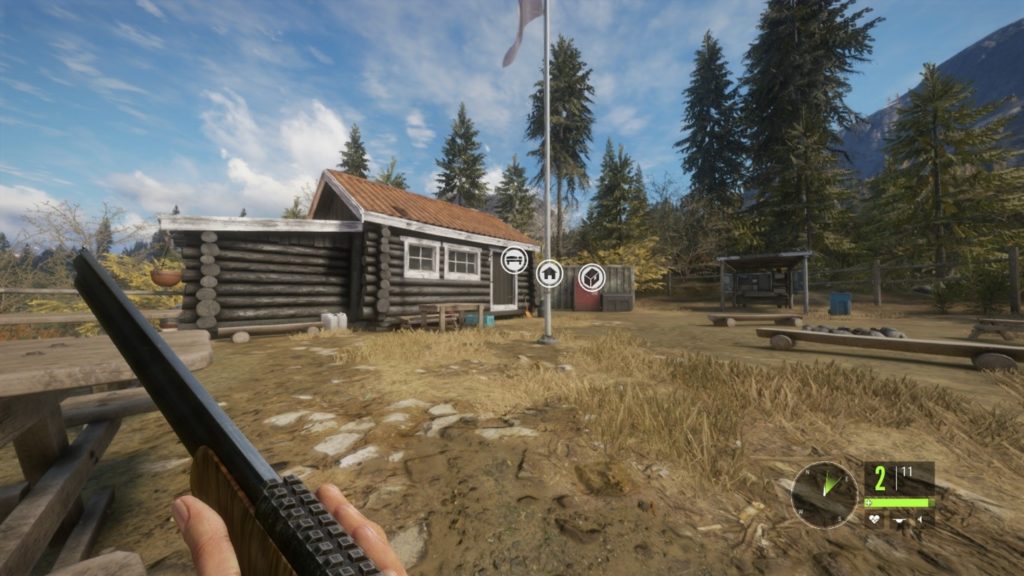 For many hunting games, shooting your prey is all there is to do. Not so with Hunter CotW. Exploration is a game within the game. Both maps have several zones to traverse, each one littered with lodges, observation towers, and landmarks to discover. You will also come across artifacts and shedding. These will earn you money, but the addition of a collection section in the game codex is something that will be sorely missed by a completionist type.

The environments are beautifully rendered by APEX, Avalanche’s proprietary open-world engine. Each map is large, and traveling from one end of the map to the other will take quite a while. I am not sure exactly how long, as each attempt I made to time the trip would end with me becoming distracted by the scenery and veering off in a new direction to explore my immediate surroundings. You will find all types of terrain, from dense forests to open fields with hay bales scattered about. There is a day/night cycle, and you will see some breathtaking views; my favorite was from the top of a cliff looking down upon a fog covered valley as the sun was just starting to come up over the horizon.

Even with all that Hunter: CotW has to offer visually, there is one thing missing…variety. Even though both maps offer beautiful locales with their own distinct flora and fauna, they are just too similar. I would have loved to see a desert biome or a snow-covered tundra. A larger variety of animals would also be nice. Out of the twelve species to hunt, five are deer. It would have been nice to add some turkeys or ducks to the mix. Perhaps this will all be coming in future DLC? 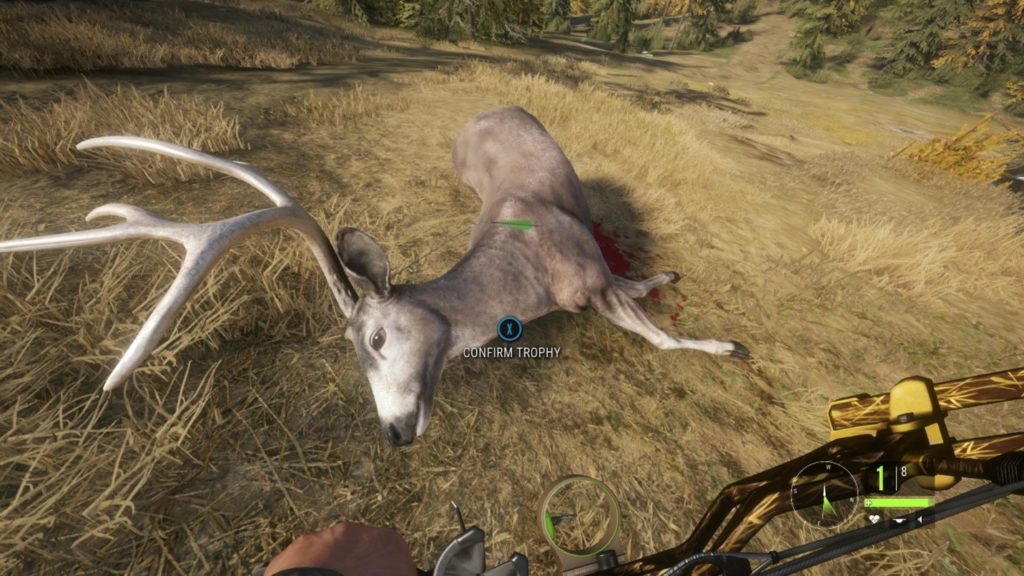 The game can be played solo, but there is also an eight-person multiplayer option. Multiplayer sessions can be started in either map, and you can invite in your friends, or just let random people join. Instead of the story missions, all the hunters will compete in challenges. These are fairly basic, along the lines of “Kill 2 Whitetail Deer” or “Hit an animal in the heart.” I made several attempts to try multiplayer, but each time there would only be myself and the host in the game. If you have several friends who would like to play, your mileage may vary.

The Hunter: Call of the Wild claims to be the most immersive hunting game to date, and it easily achieves this. Older games like Big Buck Hunter were just reflex games. Even more recent games like Cabela’s Big Game Hunter: Pro Hunts (the last hunting game I played) still had a lot of arcade elements to them. The Hunter: CotW drops most of the arcade style and replaces it with a slower paced, more realistic hunt. At first, I thought this would limit the audience to a more narrow scope of player. That is, until my 9-year-old daughter quit playing Minecraft, sat down next to me and asked, “Can I play?” Since then, she has logged more time playing than I have.

Hunter: Call of the Wild

theHunter: Call of the Wild offers the most immersive hunting experience ever created. Step into a beautiful open world teeming with life, from majestic deer and awe-inspiring bison down to the countless birds, critters and insects of the wilderness. Experience complex animal behavior, dynamic weather events, full day and night cycles, simulated ballistics, highly realistic acoustics, scents carried by a completely revamped wind system, and much more. All systems work together to increase immersion and bring out the hunter in you.
8.5
Average User Rating
6 votes
Have Your Say!
Your Rating: 0
Submit
Write A Review
Genre:Adventure, Hunting, Shooting, Simulation
Rating:Teen
Developed By:Expansive Worlds
Publisher:Avalanche
Engine:APEX