Starship Corporation is a new spaceship tycoon game from indie developer Coronado Games and publisher Iceberg Interactive. It consists of one part spaceship builder and one part real-time ship survival simulator, all bundled into a turn-based corporation tycoon wrapper. Design began over five years ago, made its way into Steam Early Access last year and, unlike many games, finally reached full launch on May 3rd. If you are wondering whether Starship Corporation made a successful launch towards the stars or if it crashed and burned, you are in luck – this is our Starship Corporation review.

Upon starting the game, the tutorial will be your first step towards the stars, as it gives you a brief overview of each segment in the game. Don’t expect to leave the tutorial with the knowledge needed to build a successful galactic megacorp, as its main purpose is to make you familiar with the menu system, and only runs you through the building and testing of a ship with just the vital components needed to function – bridge, engines, and the like. You will learn how to choose and place components, and then how to run the crew through a slew of real-time simulations to test the survivability of the ship.

Once you have completed the tutorial you will be able to start the game in earnest. Whether starting in the sandbox or campaign mode, you must first define a few parameters for your company and galaxy. Along with picking a name for your company, you will set your starting funds, maximum credit limit (going below this threshold results in immediate failure), and one of three victory conditions – make tons of money, research all the tech, or complete a specific contract.

The shipbuilding portion of the game moves away from the typical external focus (hull design, aerodynamics, flight physics, etc) of games like Kerbal Space Program, and instead places the focus on internal ship layout. You still have to place engines, life support, fuel cells, and pretty much every other system you would expect to find on a functioning spaceship, but the process is more about space and resource management than anything else. 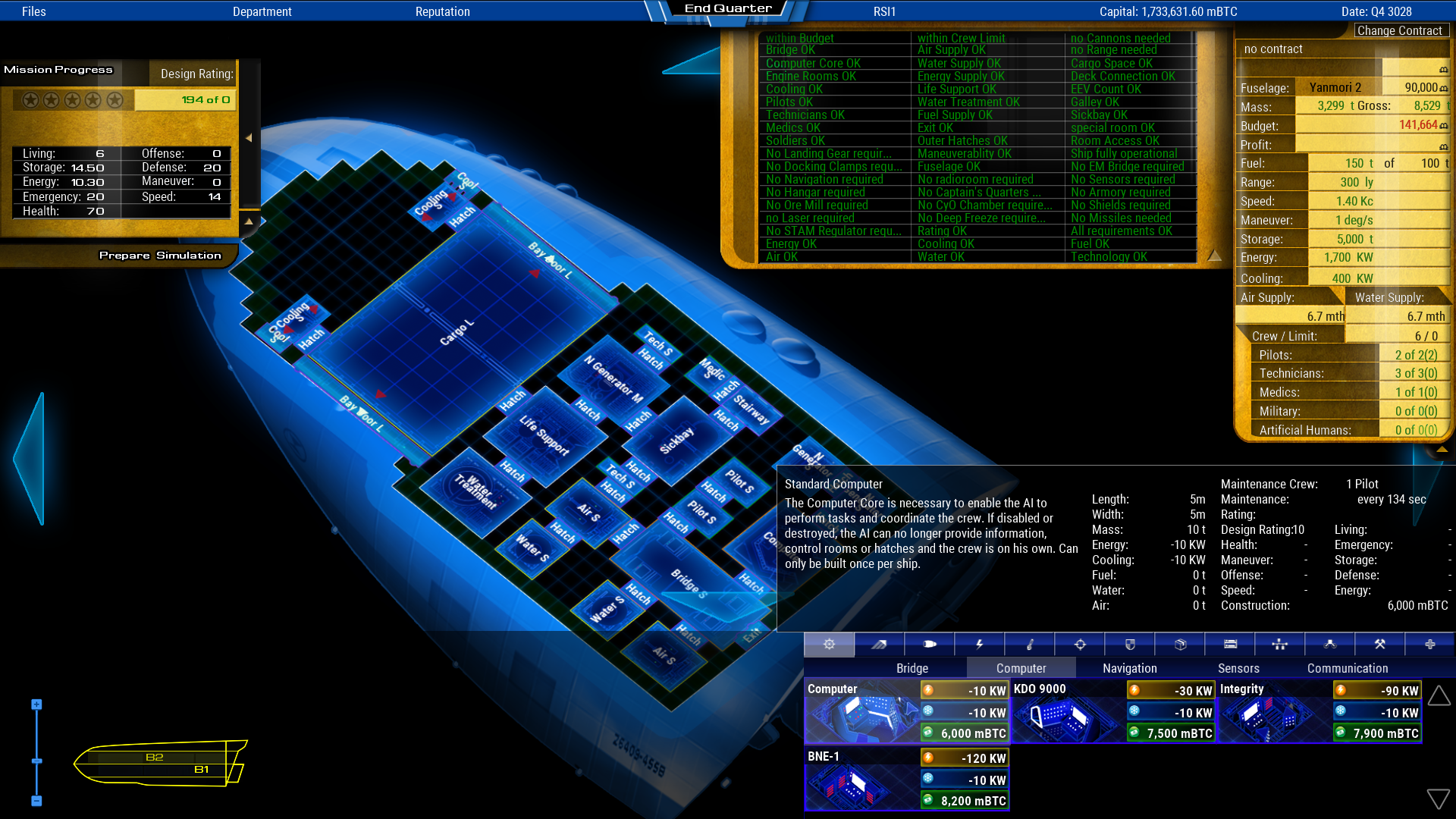 Your first step in creating a new ship is picking its hull type. There are 5 categories to choose from – shuttles, cargo ships, military, mining, and racing ships. Each category has multiple designs available, giving a total of 22 ship layouts to play with. These categories don’t pigeonhole the ship into any specific function, as each type can be used for any purpose, but each category will have properties that make it better suited for certain roles. For example, military ships have more space allocated along its hull that can be used to place armor, while racing vessels have more points available to place engines.

Each ship has a unique set of properties: 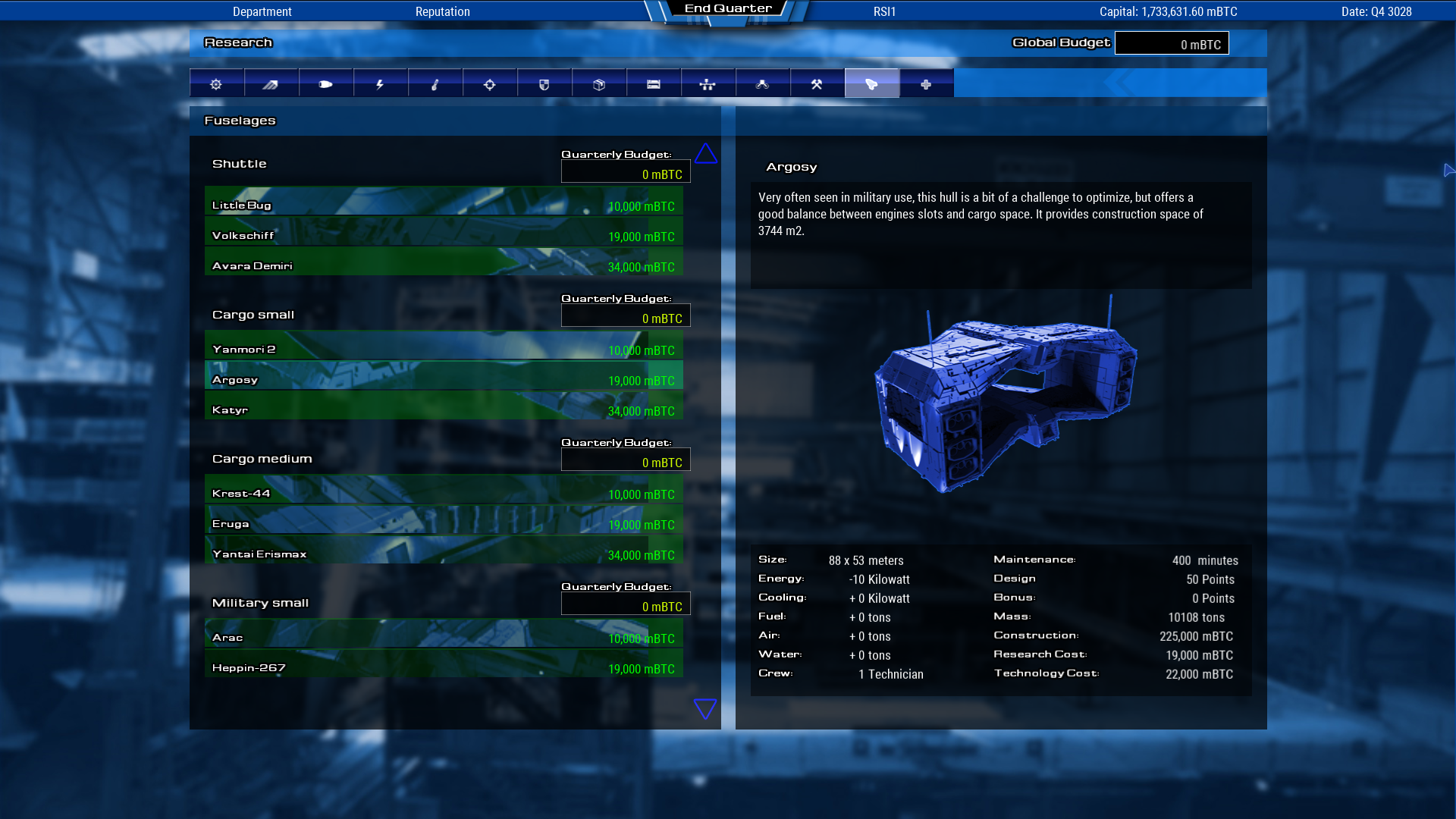 There are 13 different types of rooms, ranging from living quarters to engine rooms to weapons to shield generators. In total, there are 200 rooms spread across the different categories, with the cost rising as you advance through the tech levels. As you research new rooms, this increase in cost will yield more power or higher efficiency, and in some instances a savings on space needed to fit the room. Each choice you make affects the price of the vessel, and spending too much on research too quickly is a sure way to bankrupt your company.

When you pick a contract to build a ship there will be certain criteria that must be met. This could include using a specific ship type or adhering to a maximum budget, having a requirement for a particular engine or tool, or survivability minimums such as range or life support needs. All of this means you have to be diligent in your choice of equipment and its placement or the ship design could be a total loss. Fortunately, designing a ship doesn’t cost anything until you build it, and before that happens you will get to put the ship through its paces.

Once you have completed the design of your ship, your next stop is to visit the Crew Management department, where you will run the ship and crew through a series of scenarios that test the space-worthiness of the ship. These real-time missions are broken up into 3 groups:

With a total of 20 scenarios to play through, this piece of the game can quickly suck up hours of your playtime, especially the first time you are building a ship for a specific purpose. For those who don’t want to invest the time required to get the highest scores possible, there is the option to auto-resolve the scenarios. I found it easiest to auto-resolve the whole list, then manually run through the scenarios that were keeping me from attaining the score I needed. 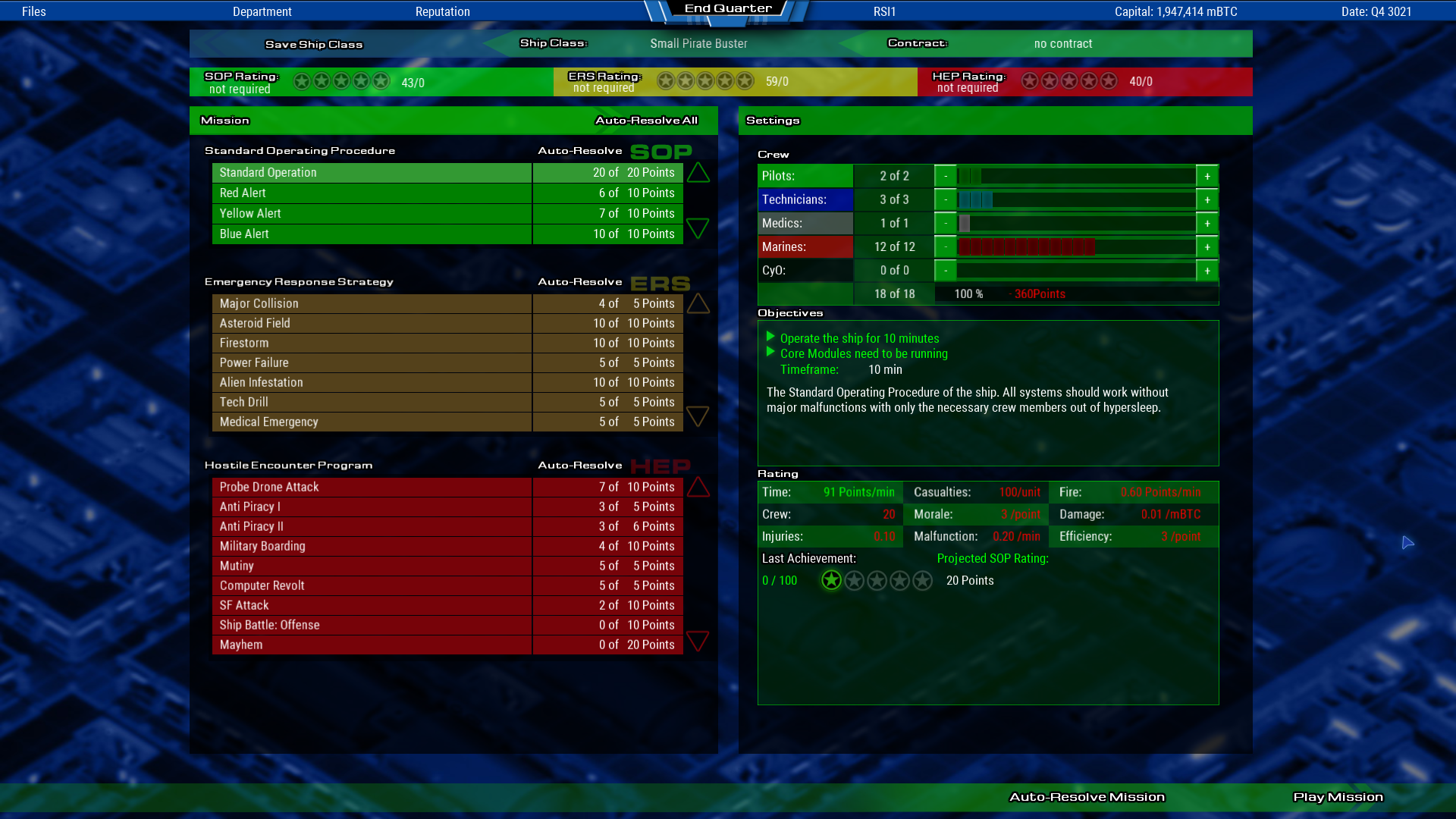 These tests are not just a pass or fail affair that will send you back to the drawing board, but merely show the survivability of your design under all possible situations that may be encountered in space. The contracts that you take on will have certain thresholds of success for each group of tests that must be met for you to get your payout, and it may just be a minor tweak to your design that is needed to meet your customer’s expectations. For example, my first few contracts didn’t require any survivability in a pirate attack, but I was able to take an older design and repurpose it as a pirate hunter by moving the outer hatch far enough away from the bridge to allow the crew to respond to an enemy boarding.

Like most tycoon games out there, the goal here is simple – start off with a small company and grow it into a goliath the likes of which the universe has never seen. You start with a single facility located on Mars and a handful of contracts available to fulfill. Pick a contract, build a ship to the required specs, and then test its survivability in the simulator. As you complete contracts and build your own personal fleet, credits will hopefully start to roll in. Those credits will be used to explore the galaxy and build more facilities in new star systems. Rinse and repeat.

At the beginning of each turn, you are presented with your company’s quarterly report, giving a simple overview of income and expenses. From there you will head to the galaxy map which acts as the main hub for all of your actions. Each turn you will choose which ships to build at your available factories, accept contracts, and give orders to each of your ships. Besides just building ships you will also have contracts to clear trade routes of hazards like asteroid fields or pirate activity. There are also some interactions with family members, business partners, and politicians, where they ask for your help. These requests are often of the quid pro quo variety, such as a politician asking for campaign funds in return for a future tax break when they are elected.

This piece of the game is definitely the weakest aspect of Starship Corporation. With so many other space exploration and tycoon style games of the past offering up so many options, it was disappointing to see such a bland galaxy. The galaxy map is pretty small, and what space there was feels lifeless. The first time I accepted a contract to clear a spot of pirate activity, I expected to be thrown into the simulator to act out the battle in real time. Instead, a window popped up informing me I had encountered a pirate ship, and that I had a good chance of winning the fight. When I hit OK, it automatically resolved the combat, and once again a window popped up informing me of my victory. It seemed strange that there wouldn’t be an option to resolve the conflict manually since that option was available in the mission simulator. 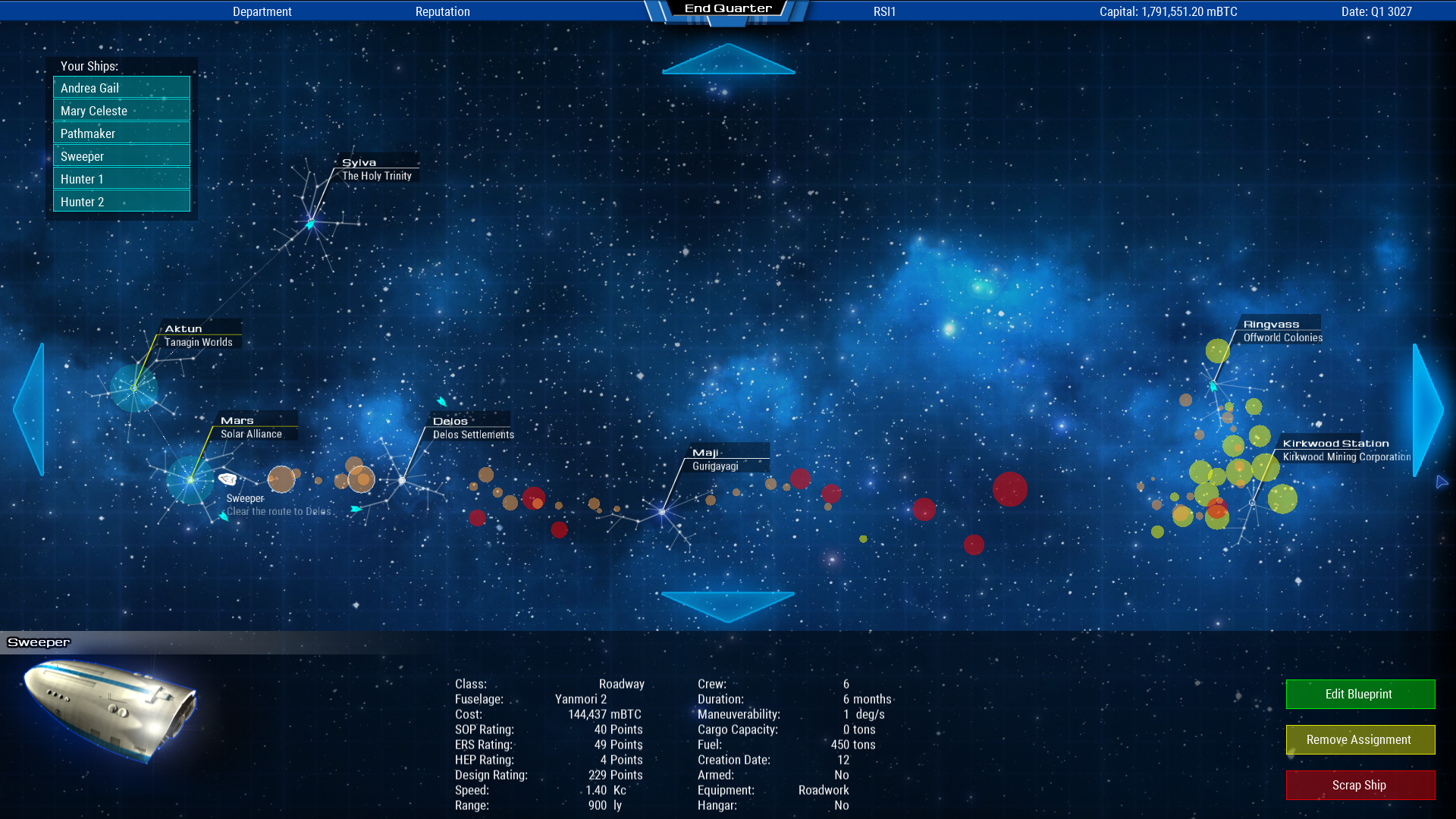 The same was true for any event that occurred. When one of my ships went through an asteroid field, I wasn’t thrown into a real-time scenario where my crew had to repair any damage. Not once did anything go wrong that needed my attention as my ships traveled the galaxy. This made the whole process of expanding my company unfulfilling. I never lost any ships due to my own negligence. I never had to worry about running out of money. I never had to worry about anything. I merely chose which contract to fulfill, built ships, and sent them off to do whatever task was needed to complete the contract and get paid.

Shipbuilding was difficult at first, but after a few disastrous attempts I began getting the hang of the systems available and was able to churn out functional designs. It is quite challenging, yet enjoyable, to tinker away at a blueprint, doing everything possible to reduce design costs while utilizing all the resources available.

The exact opposite is true of the crew simulator. As soon as I became proficient at ship design, the real-time simulations became boring. The individual missions become repetitive and easily completed, so much so that I eventually quit running the missions manually and accepted the auto-complete results as long as they met the minimum score required for the contract. It just wasn’t worth the extra time to milk every last point out of the simulator since it didn’t have any real effect on the gameplay in the campaign.

And that takes us to the verdict on the campaign. To be perfectly blunt, the campaign is forgettable, to the point that the game would be better off without it. I would rather the galaxy map be stripped from the game, and the focus is put on acquiring and completing contracts.

Tags: Coronado Games, spaceship simulator
Summary
Starship Corporation is a mixed bag. The learning curve on shipbuilding is steep but well worth the time to master. The mission simulator is fun at first but becomes repetitious and predictable after a short while. The galaxy map and turn-based empire builder portion of the game lowers the overall quality and experience of the game, and dropping it completely would have garnered a higher review score. It is obvious Starship Corporation is a labor of love. There are some definite flaws in the game, but while many games feel like a cash grab, you could tell the developer was doing the best they could. It would be great to see a bigger developer jump on board and give this game the resources and polish it deserves in a version 2.0.
Good
Bad
5.8
Average

Starship Corporation is a new spaceship tycoon game from indie developer Coronado Games and publisher Iceberg Interactive. It consists of one part spaceship builder and one part real-time ship survival simulator, all bundled into a turn-bas...
9.4
Average User Rating
1 vote
Have Your Say!
Your Rating: 0
Submit
Write A Review