Astellia, the fantasy MMORPG that promised to take us on a nostalgia trip back to our favorite, classic MMOs, has had a fairly quiet run since its release on September 27th. What began as a surprise for many fans of the popular genre, has fizzled out in the previous weeks that we’ve kept a close eye on the game. Overshadowed by the chaotic launch of the buy-to-play ArcheAge Unchained, Astellia has drifted into the background of gaming news and almost disappeared off the radar completely. But, other shiny new toys for gamers to play with can’t be completely blamed for the derailing of its hype-train. If you’d like to read our review in progress you can find the first part here, and the second part here. Follow along with us as we dive into what makes or breaks the game experience. This is our Astellia review.

You control an Astellian, a special sort of human able to command a diverse cast of fallen, celestial beings referred to as Astels. The story begins simply enough, allowing you to gain your bearings in a rich world where you are surrounded by friends and your little sister. Suddenly, you are thrust into the midst of a cosmic war between humanity, astellians, and demons, and your little sister is ripped away from your grasp. From this point on, the story gets a little hazy and uninteresting. 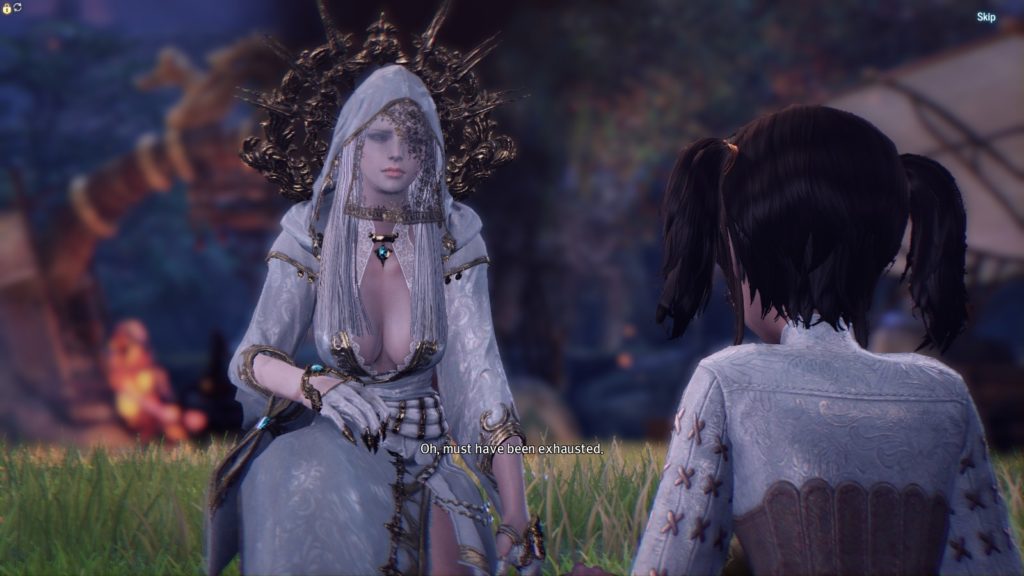 Astellia’s storyline isn’t absolutely terrible, but it’s somewhat forgettable. I truly wanted to care about the story. I was actually pleasantly surprised that they used the kidnapping trope on a family member instead of a romantic interest. The romantic interest trope is used far more than it should be in games, so it was a nice turn on your character’s motivations. While you are making an effort to get stronger, you aren’t doing so just for power. Your journey is based on a mission to protect the innocent and reclaim what is precious to you. In this sense, the game sort of feels more like an RPG rather than an MMO, because of how personalized the story is to your character.

The world of Astellia is breathtaking. If there is one thing the developers really knocked out of the park, it was the environment. Cities and villages give off a feeling that the NPCs you see moving about do actually live there. The assets and decorations are placed so well that I found myself having to stop and admire little nooks and crannies nestled throughout the towns. The backdrop of the cities set against a beautiful mountain or a waterfall only adds another layer to how immersive the world is. The creators of the world knew exactly what they were doing when they designed these zones and each rock, tree, tent, or waterfall feels purposefully placed within the world. 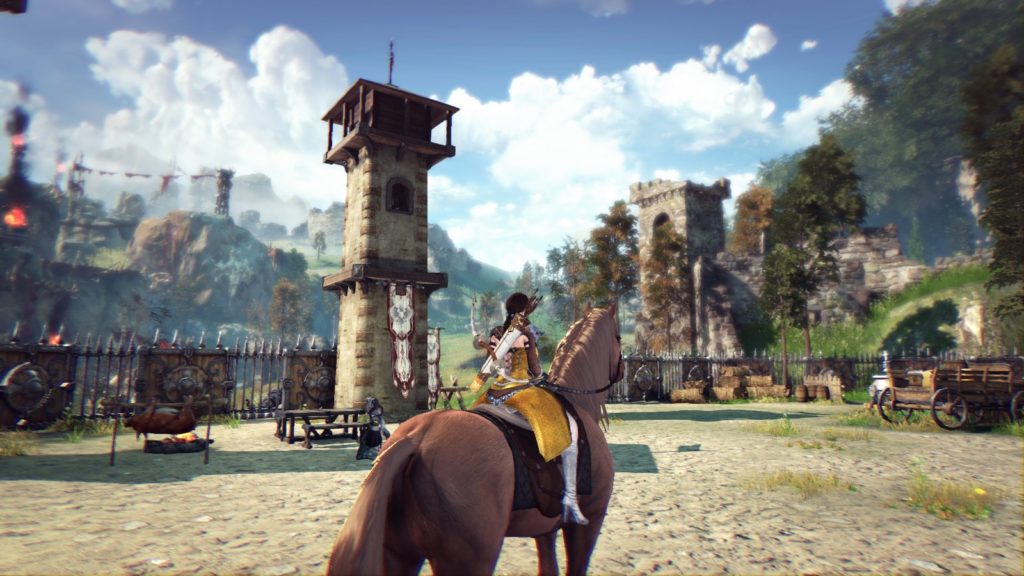 The music throughout your questing experience is also extremely pleasant to listen to. Soft orchestrations or piano pieces don’t command your attention, but instead, aim to enhance it. It doesn’t ask for your undivided attention and instead seeks to add another layer to the environmental experience.

Unfortunately, to say that I enjoyed the combat while I was questing through zones would be a dishonest, monumental lie. Astellia promised to bring you a nostalgic experience when it came to combat, but as an archer, I felt like the combat was more of a chore than anything. There are combos here and there that add some interest to the standard combat rotation, and you are allowed to dodge out of the way, but with the movement in the game already feeling clunky I was left at a loss for what I could do to increase my combat experience. Twenty levels into the game, and I was already considering starting a brand new character because I couldn’t stand how sticky and ineffective my class felt. Combat and movement are a core part of Astellia. You need to be able to defeat monsters and progress through dungeons to play the game. So if you don’t enjoy how combat feels, you aren’t going to progress very far. 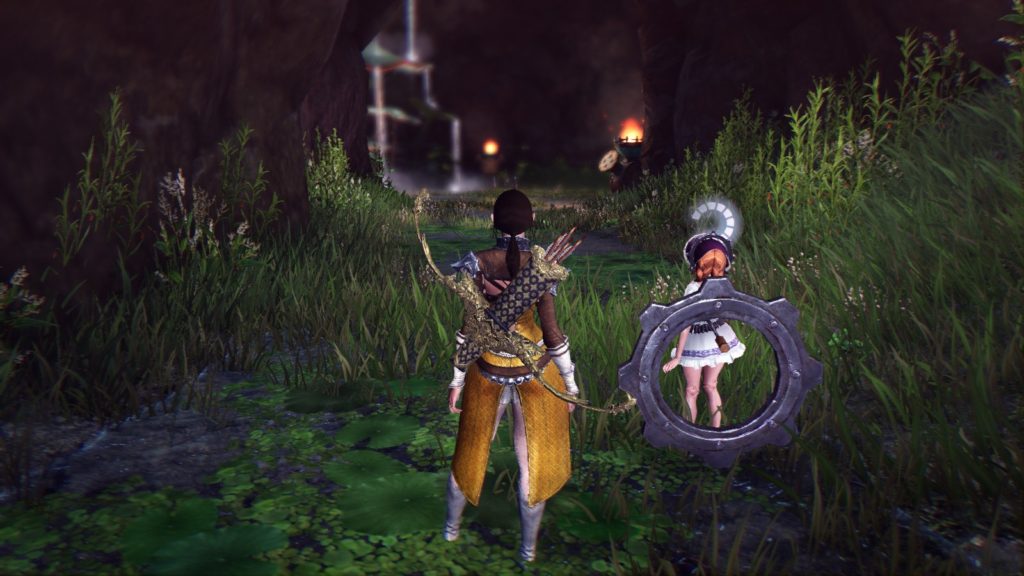 Astels are part of a primary collection feature of Astellia. As you go through your main story quest, you can collect various celestial beings that take on the shapes of adorable animals, cute loli girls, or serious edgelords. Having taken a break from the game for a few days to take care of real-life priorities, I came back to my character and her Astels and felt extremely frustrated when I couldn’t move them out of their “resting” mode. Eventually, I once again figured out where the “modes” were for the Astels. The UI isn’t awful, but some parts of it feel extremely non-intuitive and require heavy tweaking to ease the burden of a busy screen. 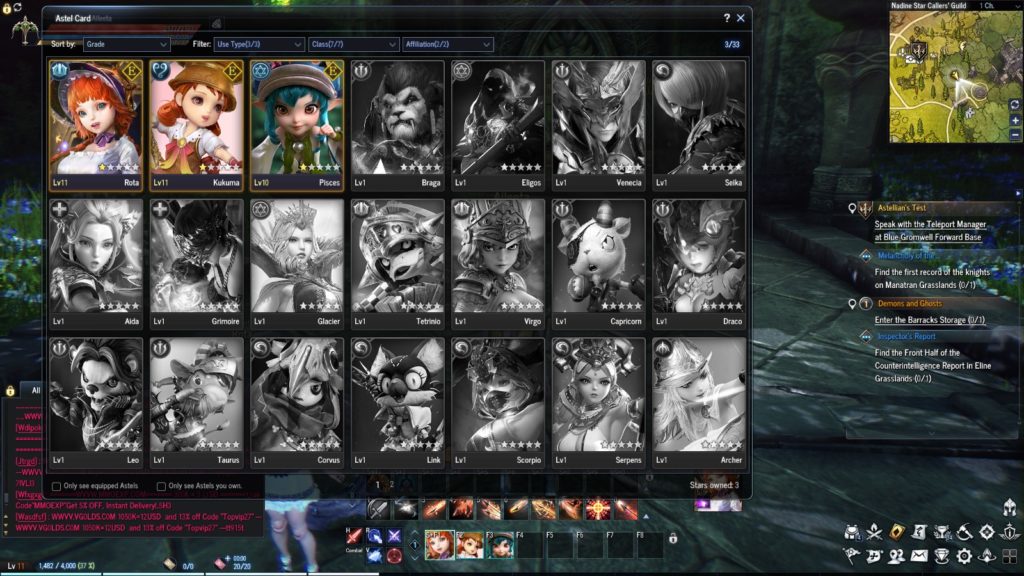 At first, I wasn’t fond of the Astels. They felt useless in combat and good lord was their quest dialogue cringy. Once I finally fell back into my groove however, I began to appreciate the different roles that they brought into my life. As useless as I felt as an archer, my main Astel Rota had a skill that pulled agro onto herself, giving me some time to replenish my health before I unloaded my skill combo on the mobs once again.

Being able to collect so many companions at one point had me questioning the players around me later on. The storyline tended to focus on how rare Astellians were. And yet, there were Astellian players gallivanting all around the zone with their own Astels in tow. Not only that but with a full party of Astels, what was the point of reaching out to other players for help completing content? I seemed to be getting by well enough on my own. It’s at this point that I found myself really wishing that Astellia had been just a single-player RPG with the option of grouping up with players for dungeons. Similarly to how Monster Hunter World allows you to group with friends or strangers to complete missions. 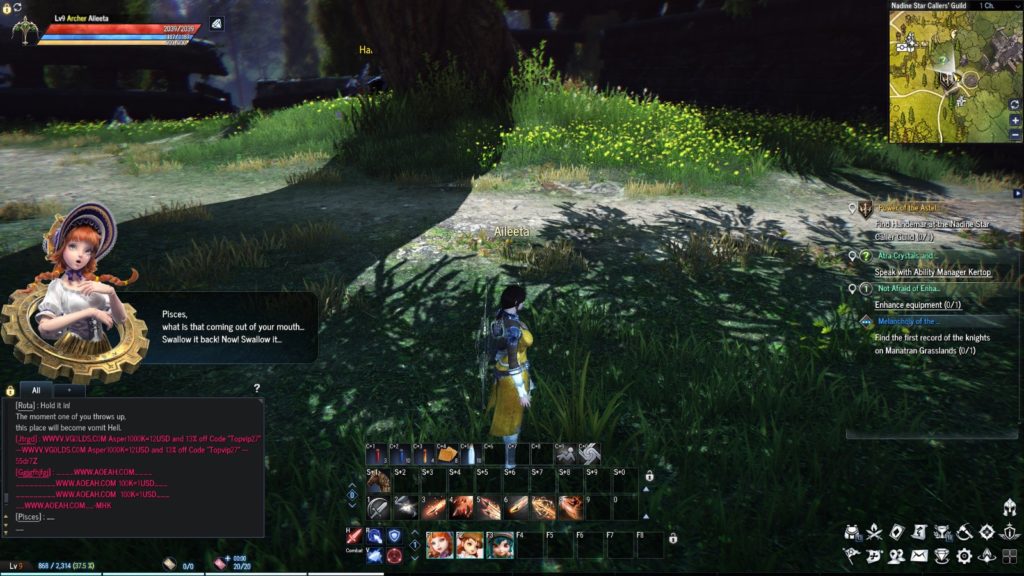 Continuing on with the subject of Astels and the world, who exactly is the target audience for Astellia? It tries desperately to blend gritty fantasy and over-sexualization with cute, cartoonish themes. There are even dances in the game that show off moves reminiscent of K-Pop girl bands set to modern, upbeat music. While these dances are fun, it just doesn’t fit in with the world that was established at the beginning of the game. None of it does. The hyper-sexualized armor that female characters are given to wear, coupled with the extremes from which you could push character creation and questionable character model physics had me wondering who exactly they meant to target. I could take a few guesses, but I don’t want to stereotype. Also, let it be known that I absolutely hate being called “Master.” I do not dig. 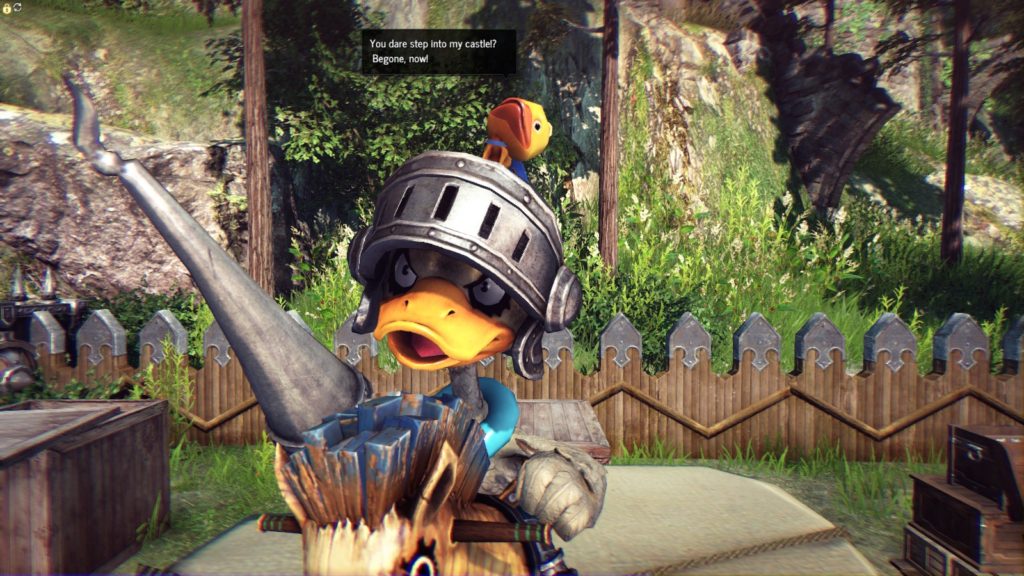 I’m not saying that I don’t enjoy playing an attractive character. I am always thrilled when I have the opportunity to use body sliders to make characters curvier, but the over-sexualization of female player characters felt like just another ill-fitting puzzle piece in the grand scheme of things, designed with an ulterior motive to hold the player’s attention. Astellia earns a few points back in my book for how they handled their cash shop. There are two forms of currency: Zender(loyalty) and Gems. Zender can be earned in-game and spent on specific items that might have otherwise been deemed as “pay-to-win” were they offered for Gems instead. Gems are a form of currency that you purchase for real-world money to buy cosmetics and some quality of life upgrades. 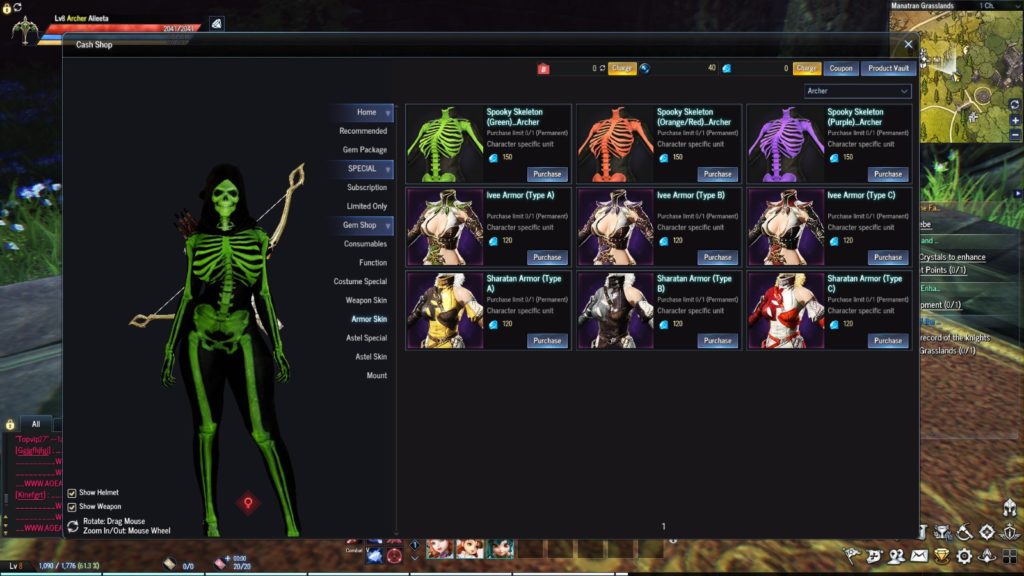 We are now weeks after launch, and it feels somewhat strange and lonely to log into Astellia’s empty zones. There are a few players that run by me every once in a while, but for only one server I fully expected to see more players running around and enjoying the game. More and more, my journey is feeling like a singleplayer one. The main chat is filled to the brim with gold spammers. It’s so terrible that players that do try to communicate with each other just get drowned out in a sea of neon pink text. An entire text channel is now obsolete because gold spammers have been given free rein of the place. If these gold sellers aren’t being controlled or taken care of, it makes you wonder where the publisher’s priorities really lie concerning their game. 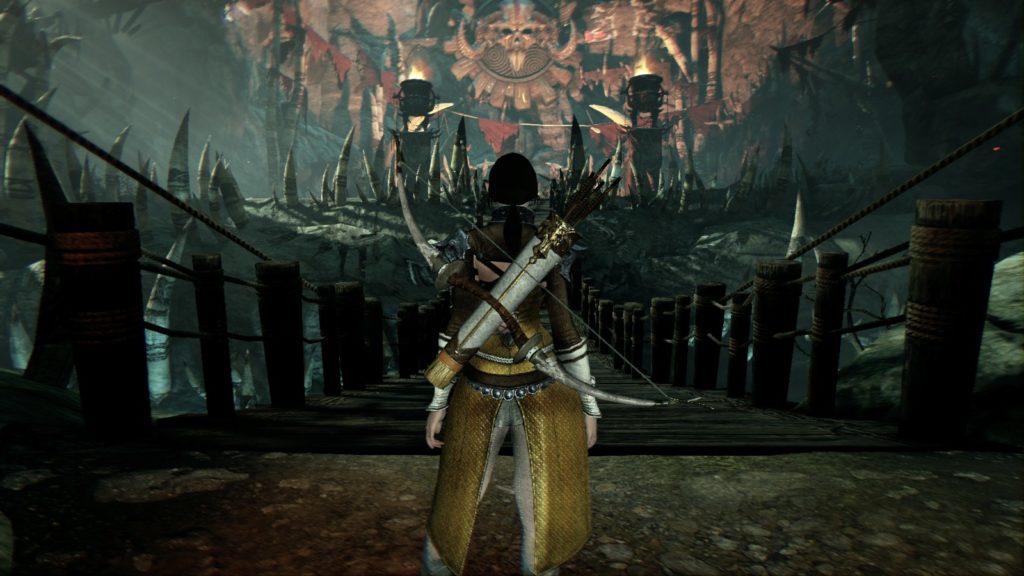 Overall, I think it’s safe to say that I left Astellia with a heavy heart and lamenting the potential that it could have had. Astellia is a patchwork quilt of features that don’t quite match up to their seams, and left me feeling somewhat bored. The main feature that kept me coming back was the gorgeous world and the hope that I might eventually get an Astel that I didn’t feel embarrassed to have on my team. Combat and dungeons as a whole are just extremely uninspiring for me, and if I can’t get rid of that feeling of discomfort when I’m fighting, it makes for a miserable experience on the journey to endgame content. While others may find themselves enjoying the various mismatched themes the game had to offer, I couldn’t get on board with it as a complete package. 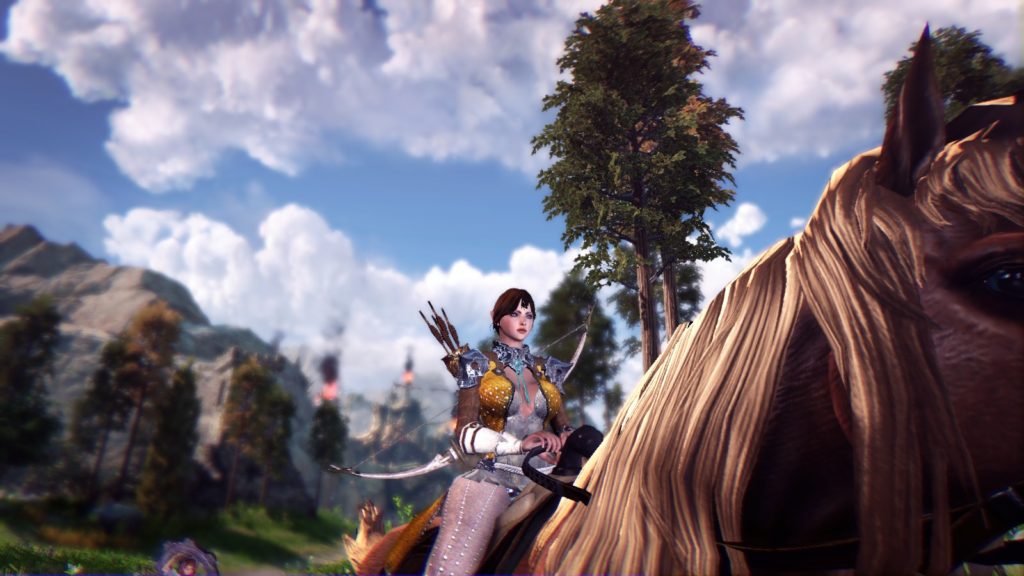 There were some features that I enjoyed on their own but collectively felt like they were just thrown in for the sake of saying they had them and marketing. Optimization is also a little concerning-something I thought they might have fixed during closed testing. 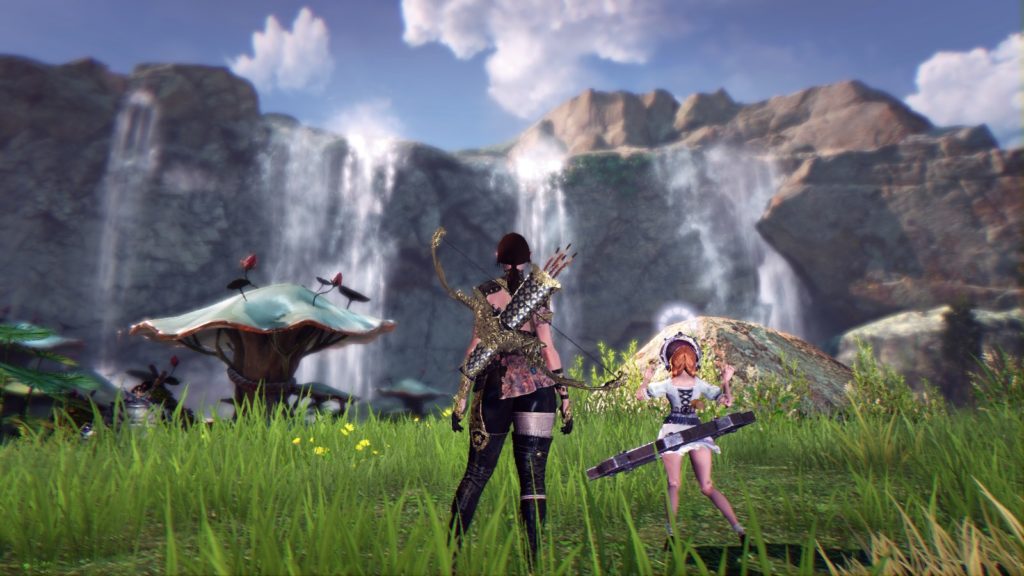 Tags: Astellia, Astellia Online, fantasy, MMORPG
Summary
At the end of the day, this is all purely my opinion, and you may find some of the things I said do actually resonate with you and might be the catalyst for you wanting to jump in and try the game. If that’s the case, awesome! Astellia isn’t a terrible game by any means, and I encourage you to try it for yourself. It just doesn’t feel like a great one yet.
Good
Bad
5
Average 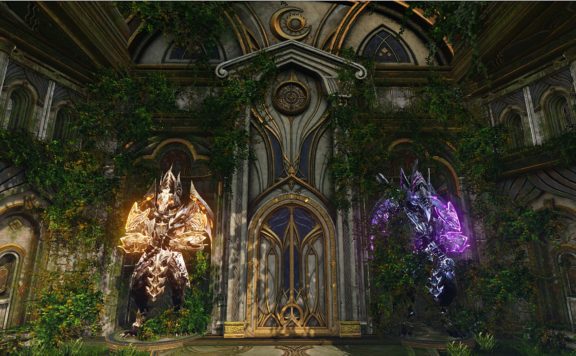 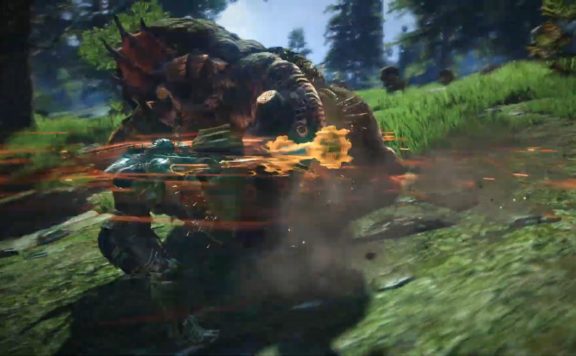 Elyon Launches In Korea With A Shiny New Website
December 11, 2020 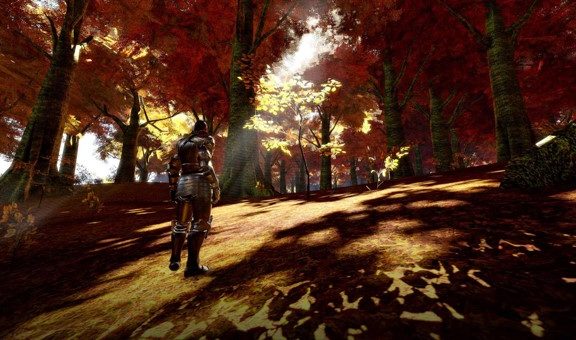 Astellia, the fantasy MMORPG that promised to take us on a nostalgia trip back to our favorite, classic MMOs, has had a fairly quiet run since its release on September 27th. What began as a surprise for many fans of the popular genre, has f...
4.9
Average User Rating
1 vote
Have Your Say!
Your Rating: 0
Submit
Write A Review