The Nintendo Switch has so far been a tremendous success this year, racking up more record-breaking sales for Nintendo than some thought possible. With stellar first-party hits launching left and right, like The Legend of Zelda: Breath of the Wild and Super Mario Odyssey, there is a game for every Nintendo fan. But what about the gear-heads out there that still love Nintendo? There aren’t many options for us racing fans on the Nintendo Switch other than Mario Kart 8 and the recently released port of Beach Buggy Racing. Well, Eden Games is here to change that. Say hello to Gear.Club Unlimited. Admittedly a port of their mobile game, Eden Games has enhanced and improved Gear.Club to make it a racing sim that’s been customized for the Nintendo Switch, even integrating many of the Switch’s features into their game. But will it satiate the need for high-octane speed? Here’s our Gear.Club Unlimited review.

Let me get this out of the way: due to the nature of the Nintendo Switch’s triggers, the acceleration and brakes are either on or off. There is no fine-control over how much you press on the gas or brake pedals, which racing sims on other platforms utilize for an authentic experience. There is only gas, no gas or brakes. Due to this feature, or lack thereof, on the Nintendo Switch, it is nigh-impossible to simulate a true racing experience without it feeling like an arcade game instead. That said since this was due to Nintendo’s lack of foresight my review will not be impacted by this slight. As such, it can be compared more evenly to Mario Kart, or even Eden Games’ previous racing game Test Drive Unlimited, than it can to its other racing sim contemporaries like the Gran Turismo and Forza Motorsport franchises. Even without these fine motor controls, however, Gear.Club Unlimited is an absolute delight to play on the Switch. And now for the review.

Gear.Club Unlimited is deceptively robust for a port of a mobile game. The campaign is a tour de force of content, with over 400 races ranging from track circuits to off-road rally races and even time-trials. Unfortunately, there are no real-world locations present in the game, but certain areas in-game definitely evoke images of famous locations such as the Monaco speedway and even the Nürburgring. As you progress through races you unlock different series as well as new zones. In order to unlock these new zones, you must earn enough stars which are earned by completing races. Each race can get a max of three stars and, although I don’t particularly like this carryover from the mobile version, it kept me engaged as I climbed the ranks. What would’ve been just a single race turned into a whole series of events as I always thought, “Just a few more stars to unlock the next zone!” These new zones, in addition to introducing new tracks, also unlock shops to buy new, faster cars. 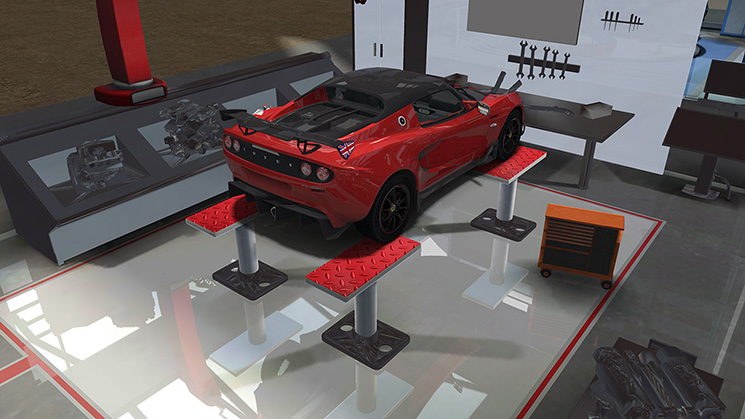 In total there are 32 cars available for purchase in the game with an alternative version of each car with a sporty skin, decals, or paint job available as well. The cars are thankfully fully licensed ranging from BMW to Mercedes to Lotus and even McLaren but, sadly, Toyota is once again lacking in the car scene. Cars come in different classes, or tiers, starting from category A cars up to category D at the highest tier.

Each car can be fully tuned up and customized in your garage. The garage is customizable with expandable floorspace, parking spots, tires workshops, mechanical engine tuning workshops, aerodynamic wind tunnels, and even shrubbery and other miscellaneous objects for decoration. There are even themed settings, such as a 50’s-style Diner and a swingin’ Nightclub setting. This gives it a Sims quality, as I’m constantly decorating and rearranging my garage to make it more fabulous! The workshops are all upgradeable by spending in-game money and, by upgrading, will offer enhanced tuning options or upgrades to your cars, depending on the car class. This upgrade feature is a modified aspect of the mobile game as were this on a phone I’d have to either wait for upgrades to complete or pay real-world money to accelerate the time. As it is on the Switch, however; it almost feels like an RPG mechanic. I’m constantly leveling up the workstations to further level up my cars which are, in turn, all different racing class tiers depending on the vehicle model. It almost feels like I’m leveling up RPG characters in a Final Fantasy Tactics game.

The different races and tournaments are exclusive to different classes of cars. Although I wish that, given enough upgrades, any car would be able to compete in the higher ranked races, each car has a maximum horsepower you can eek out of it which limits it to only the races within its tier. Thankfully it doesn’t bring down the amount of fun you have though, and I’m appreciative that I can’t just dominate lower-level races with a supped-up Bugatti Veyron. In fact, in case the game feels too easy, the challenge level can be customized with a simplified version of Forza Motorsport’s driver assists that lets you adjust assisted braking, steering, skid, and racing lines. In addition, Gear.Club includes a rewind feature, much like the titular Forza games, that actually improves upon the concept. You can freely rewind and find just the right spot to try again, unlike Forza’s automated system. 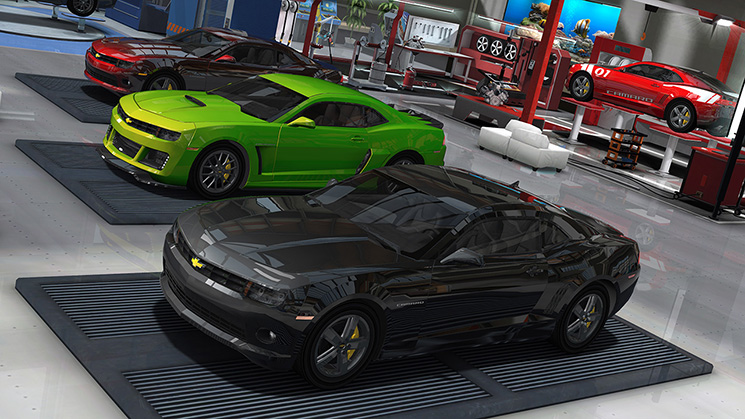 Eden Games clearly worked with the manufacturers to provide an authentic feel to each car; though it’s slightly lost when it comes to each car’s ability to drift. All the cars have a tendency to oversteer in a turn and often times it’s easier to do a handbrake turn around corners than it is to apply the brakes and follow a line through the apex. Each car is equally competent on both the tarmac as well as the off-road races, though there is a noticeable difference in both the feel and control of cars that are front, rear, or all-wheel drive as well as front versus mid-engine cars. This is where the ‘sim’ comes into the races; every car can handle every track, but you definitely want to pick the right car for the job if you want the best times. This becomes especially apparent in Gear.Club’s online leaderboard modes called Leagues.

Leagues are weekly race events you can compete in to get the best times. The higher you are on the leaderboard; the more league points you earn which acts as a separate leveling system. The higher you go in leagues, the more cups you unlock, and you can keep ranking up until you’re racing against the Legends out there for the top pole position. League isn’t the only option for multiplayer play as there is also local split-screen on the Switch for up to four players. Even with four players going the game retained a smooth framerate and didn’t have any noticeable dips or even sacrificed the graphics. Eden Games has also promised that true online multiplayer races will be added to the game as a free update at a later date. In addition, they also plan to bring new cars, game modes, tracks, and whole zones via content updates.

Gear.Club also utilizes several unique features of the Switch system, including the HD rumble in the joycon controllers as well as the option to play the game via motion controls. Although my preferred control method is with Nintendo’s Pro controller, the game feels comfortable to play with the joycons attached to the switch via handheld mode, separate in each hand, or in the grip controller that comes with the Switch. It was even fun to try out the motion controls with automated acceleration and braking, although I don’t recommend it for getting the best times. In fact, the game itself will recommend to you via tips on the loading screen in order to have the best lap times you should turn all of the assists off. 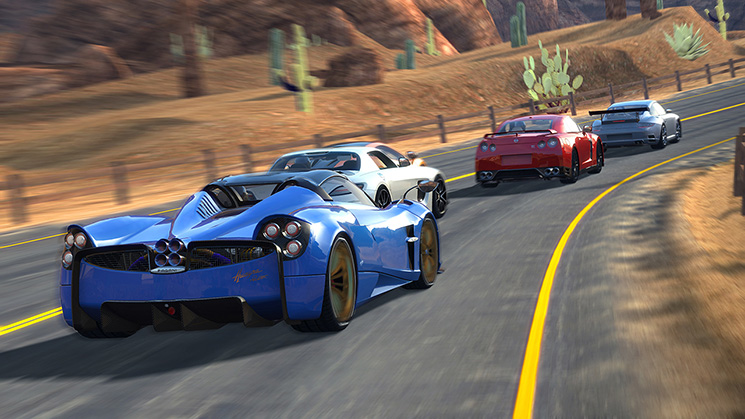 The Nintendo Switch doesn’t allow for too many racing games to shine with the well-regarded Mario Kart 8 Deluxe hogging the spotlight. But Gear.Club Unlimited is stealing the limelight this holiday season with its racing sim action, RPG-lite upgrade system and beautifully rendered licensed cars. Although it’s not a true racing sim, this is still the best racing game available on the Nintendo Switch to date. Gear.Club Unlimited is available for $49.99 exclusively at GameStop and digitally on the Nintendo eShop. I’ll see you on the leaderboards!

For the first time on Nintendo Switch, drive through an authentic world of cars with Gear.Club Unlimited. Get behind the wheel of the most incredible cars from the most prestigious manufacturers. Race through over 400 challenging races. Learn to master the controls of the world's fastest supercars and collect them in your garage: you can customize and tune them across the numerous workshops, then take them to the race track for the win! Challenge your friends, competing among up to 4 players on the same screen, or beat their times online.
8
Average User Rating
5 votes
Have Your Say!
Your Rating: 0
Submit
Write A Review
Genre:Racing, Simulation, Sports
Rating:Everyone
Developed By:Eden Games
Publisher:Microids
Modes:Local Multiplayer, multi-player, Single-player
Series:Gear.Club