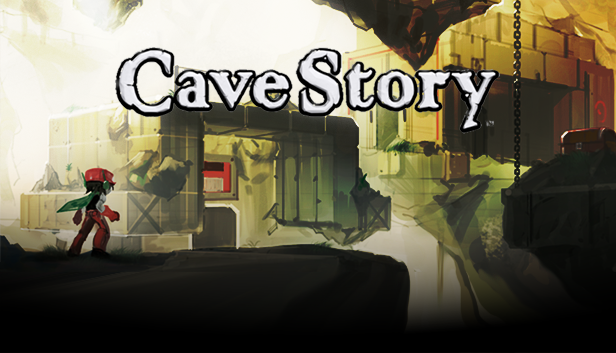 Cave Story, the infinitely charming 12-year-old Adventure game released for PC and every Nintendo console ever, is getting released on yet another Nintendo console. Yes. Cave Story + is coming to the Nintendo Switch on June 20th, 2017. However, you are an impatient man or woman with zero Nintendo consoles or $15 dollars to buy Cave Story + from Steam or Humble Bundle. How do you play Cave Story? Good news! The freeware version of Cave Story is still out there ready to be downloaded and played to your heart’s content.

First thing to do is download the game. The freeware version is found on CaveStory.org. Click the “Downloads” tab and this page will come into view. 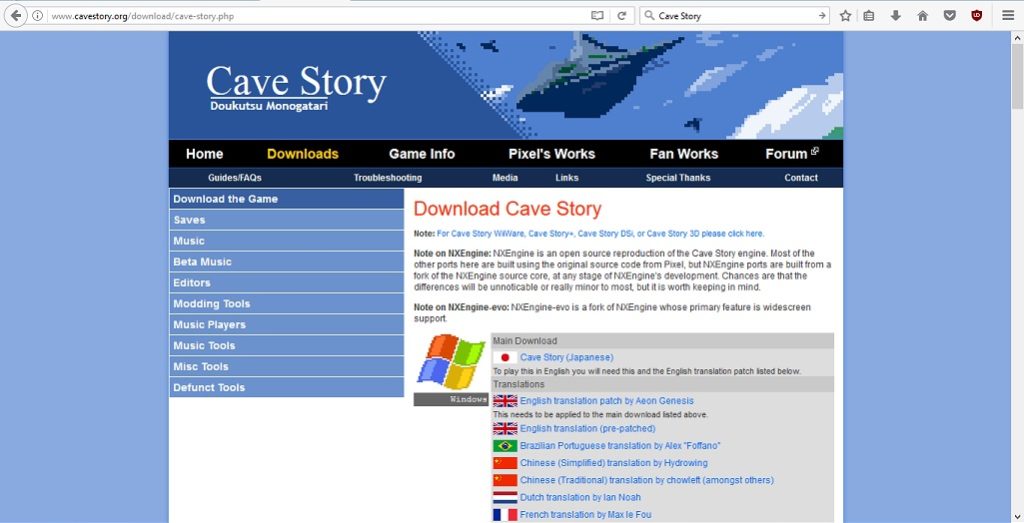 So what do you have to do to get Cave Story running on your computer?

Cave Story has been ported to almost everything that can possibly run it. There are several Windows versions. Ports come in the original Japanese, two English versions, Portuguese, Chinese, Dutch, French, German, Italian, Korean, Lithuanian, Russian and Spanish. There’s a 32-bit port for older computers. Even a downloadable patch to set movement commands to WASD. There are Mac, Linux, Amiga, Motorola, RaspberryPi and Texas Instruments Graphing Calculator versions available. The validity of all of these ports is untested as I haven’t downloaded and run them, but I would be surprised if the Mac and Linux versions didn’t run as well as the Windows version.

Since this article is written in English, I’m guessing you want to play the game in English. There are two ways to achieve this. Method one, download the zip file titled “English Version (pre-patched).” Unzip that file and store the unzipped file wherever you store your game stuff. Mine is in a folder called “Game Stuff.” Method two, download the Japanese version of the game (Doukutsu Monogatari) and immediately under the download link for that there is “English Translation Patch by Aeon Genesis.” Download that too. Unzip both files. Store them where you like. Open the English Translation Patch folder. Open the application “Cave Story Translation Installer.” Click next until you get to a screen that looks like this. 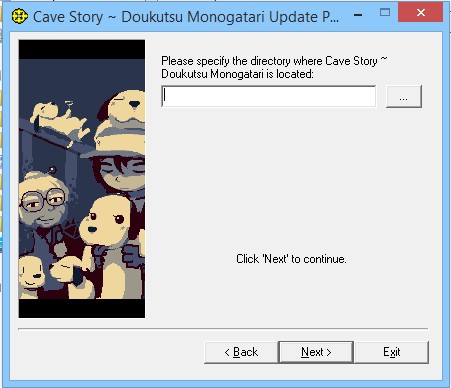 Press the button marked with ellipses. A new window will open up asking you to select a directory. Navigate to the folder where the Japanese version of Cave Story (Doukutsu Monogatari) is stored. Click next. The application will check for the file. If everything goes well, click start, and then click yes to over-write the file to display the English translation.

Congratulations! You are now able to play Cave Story with your computer keyboard! I played through the Method Two version, because it was on top. Naturally, that makes it the better version. I tested through the first twenty minutes of the Method One version and the translation up to that point was the same. “So J,” you begin to wonder, “if installing the game is extremely easy and only mildly more difficult if you want a different English translation, then why are you writing an article on how to get it to work on your PC?” Well hold on to your butt my little Funko Pop, because we’re about to dive into getting a controller to work. 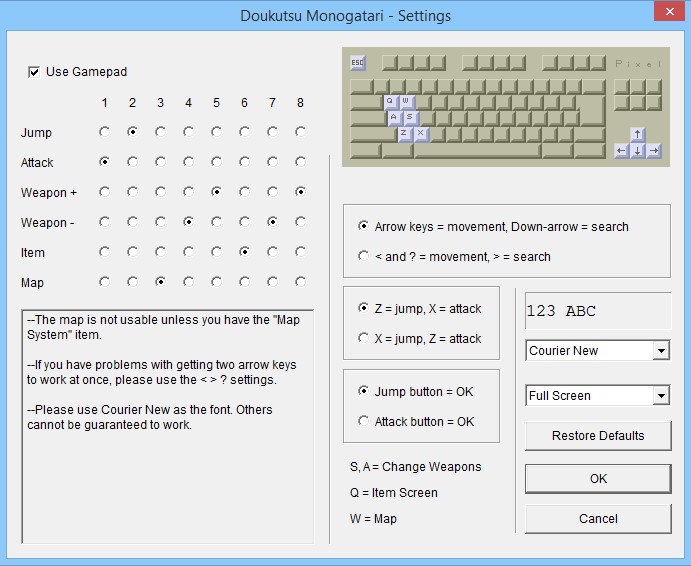 There was a small amount of foreshadowing when I mentioned that there is a port that switched the movement options to WASD. Minor alarms should have gone off when reading that since it implies that those options cannot be changed in game. They can’t. Actually, none of the movement options can be changed in game. In the same folder where the Cave Story game file is located there should also be a file named “DoConfig.” Opening that will show the above window.

That is how one would change control options for Cave Story. You can switch up some aspects of the keyboard controls and change the gamepad button layout. The only hitch is that the gamepad button layout displays numbers and not actual buttons. Searching the caverns of the Internet led me to this video. In which PkGam gives a Xbox 360 controller set up and explains how one would go about testing the vague setting configuration software with your sticks of choice. I tested some for you.

The first (and easiest) controller I tested was the Xbox One controller. It’s a Microsoft OS. It runs the Microsoft gamepad. Plug in your Xbox controller via a USB cable. If your computer runs Windows 10, it is possible to do this via Bluetooth. Any necessary drivers will be downloaded. You’re basically good to go. The same button layout from the previous video can be used, but in case you ever wanted to remap a command, here is a handy chart. 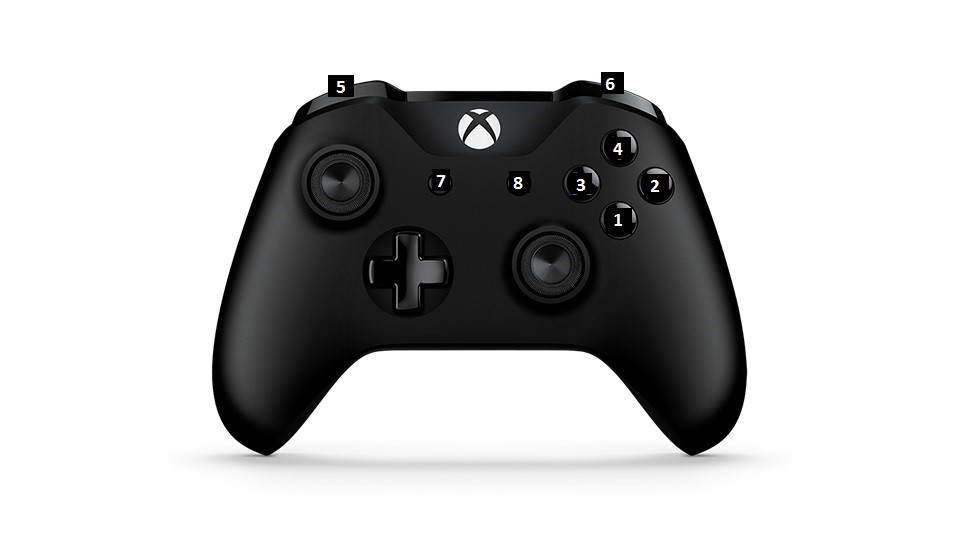 Remapping actions from here is fairly easy. For example, say you prefer to have Jump mapped to A. Fill in the circle in the jump row under the number one column by clicking it. Press okay. Voilà! Jump is now mapped to A in game.

Okay. So the bad news, these controllers don’t work natively with Windows PCs. To fully function they need a third party application. I tried everything to get these to work without downloading one. I tried importing the game into Steam and playing in Big Picture mode. I tried calibrating them from the Devices window. I even Hail Mary downloaded the WASD patch of the game. Nothing worked. Say it with me folks: “PROPRIETARY LICENSES!”

Getting the Joy Cons to Work

So I downloaded JoyToKey, which has its own user interface problems. However, it works. You must uncheck the box next to “Use Gamepad” in DoConfig to use JoyToKey with Cave Story. How the software works is that you map Keyboard buttons to the controller. The controller buttons are now effectively keyboard buttons, so “Use Gamepad” will only block you using your controller going this route. My preferred layout for the Joy Cons looks like this. 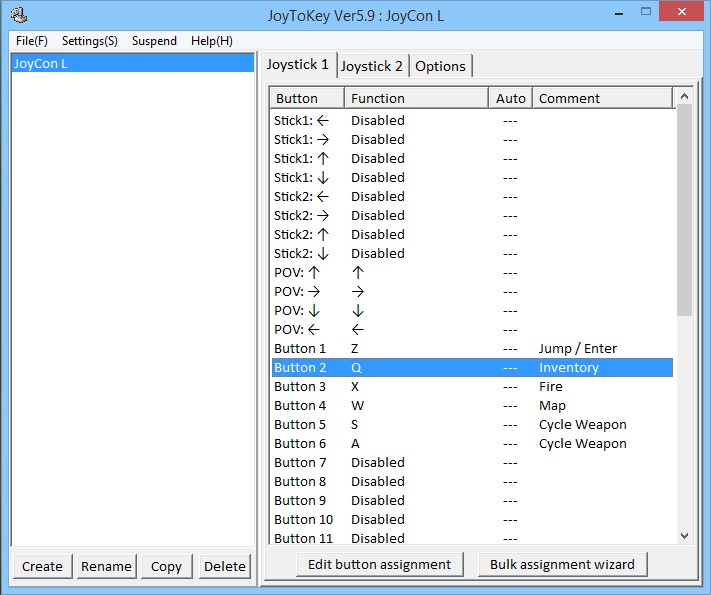 This layout will only work with Cave Story, but will work with either the left or right Joy Con. Each Joy Con will need to be configured separately though. Click “Settings” and then “Configure Joysticks.” In the next window click “Configure Game Controller Property.” Select the controller that you want to use and click “Properties.” Anything that needs to be configured can be configured from there using on-screen prompts.

It is possible that this method will also work with the Nintendo Switch Pro Controller, except with more button options, as it connects to your PC through the same method (Bluetooth) as the Joy Cons. I don’t own a pro controller, so I am unable to test this. I didn’t test any Wii U or Wii controller options. There are posts mentioning using the SNES controller, but I was unable to test.

I could not get this working without going through and testing multiple third party applications to do so. This article is already getting longer than I wanted it to be. Does anyone still remember this is a Cave Story article? I might write up a “How To Get a Playstation Controller Working On Your PC.” There are several tools that claim to allow this.

Again, I was unable to test any of this on a Mac computer since I don’t own one. A Mac port does exist. I mentioned that earlier. There is evidence that the Playstation series of controllers and the Nintendo Switch Joy Cons and Pro Controller work natively on Macs (Playstation and Nintendo). Researching if the Xbox line of controllers work on Macs seems to indicate that they do not, because of course they don’t.

Written by
Josh Robinson
In between rounds of Puyo Puyo, Josh will attempt to play other games and write about them.
Previous ArticleBrutal Combat in The Surge Explored in New Behind-the-Scenes VideoNext ArticleGears of War 4 May Update Brings in a New Map 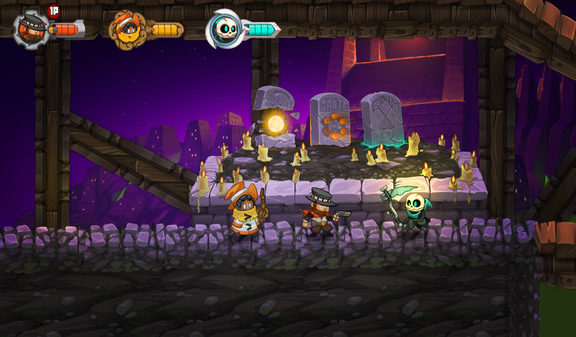 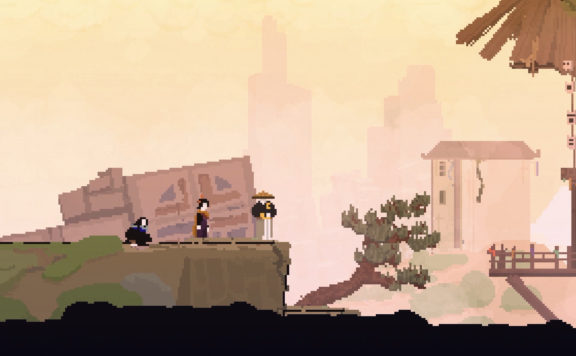