Stand aside Indie! Developer Robotality and publisher Chucklefish ported their stylish roguelike tale, Pathway, onto the Nintendo Switch at the end of May, and we decided it was high time we had some on the go adventure in our Pathway review.

Originally launched onto PC in 2019, Pathway is a highly polished pixel art adventure title. Leaning heavily on choose your own adventure tales, wartime cinema series, and taking at least a little from Indiana Jones. Anybody who is sick of the age-old high fantasy dungeon crawler deathtrap might want to take Pathway for a spin. 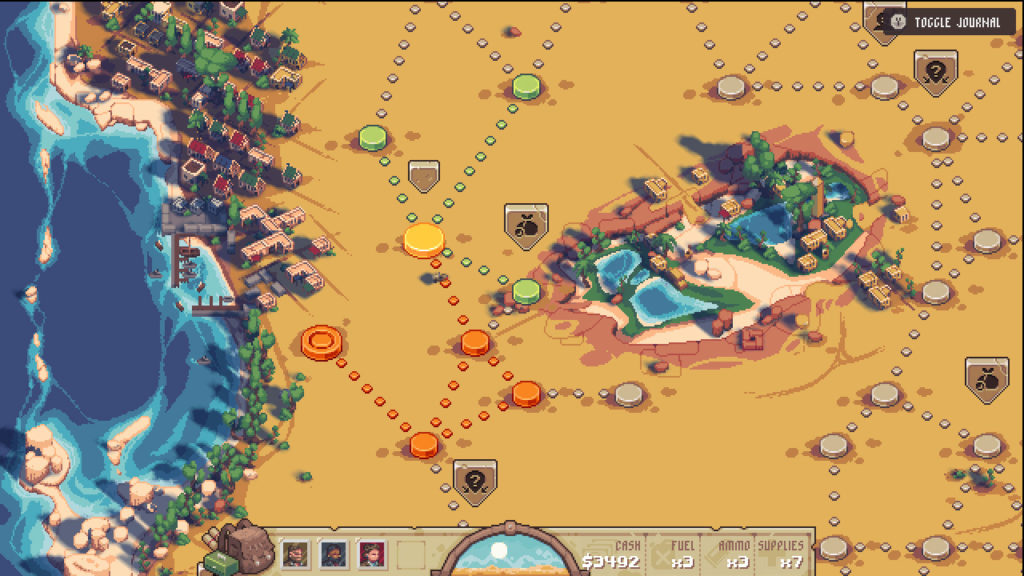 As a title that has already established a solid critical reception on PC, Pathway doesn’t change up much for its move onto the Nintendo Switch. For $15.99 or local equivalent you get a beautiful mix of high resolution pixel art and turn based combat all wrapped up in a narrative that makes a refreshing change from other expeditions. Set in the 1930s, a time when conflict is creeping up around the globe and technology hasn’t quite tamed the unexplored regions of our pale blue dot, Pathway challenges gamers to assemble a team of bold adventurers and journey through the desert. Here, you’ll explore bunkers and temples of Northern Africa, hopefully discovering their hidden treasures and secrets before they fall into the hands of Nazi forces.

Getting started in Pathway is a relatively straight forward affair. After relinquishing the option to take a hardcore road, this title opes up on a series of chapters, each available to unlock as you stumble across Africa. The opening salvo of this adventure finds players chasing across the sands in an effort to save a colleague and relies on players picking from a relatively limited subset of characters for this foolhardy task. Teams in Pathway are a mix of characters, each with their own mix of talents, wielding different weapons and accessories, as well as a unique ability. With their own stats, skill tree, and equipment you’ll find that even the opening range of five, which can be easily expanded, provides plenty of options on and off the battlefield. 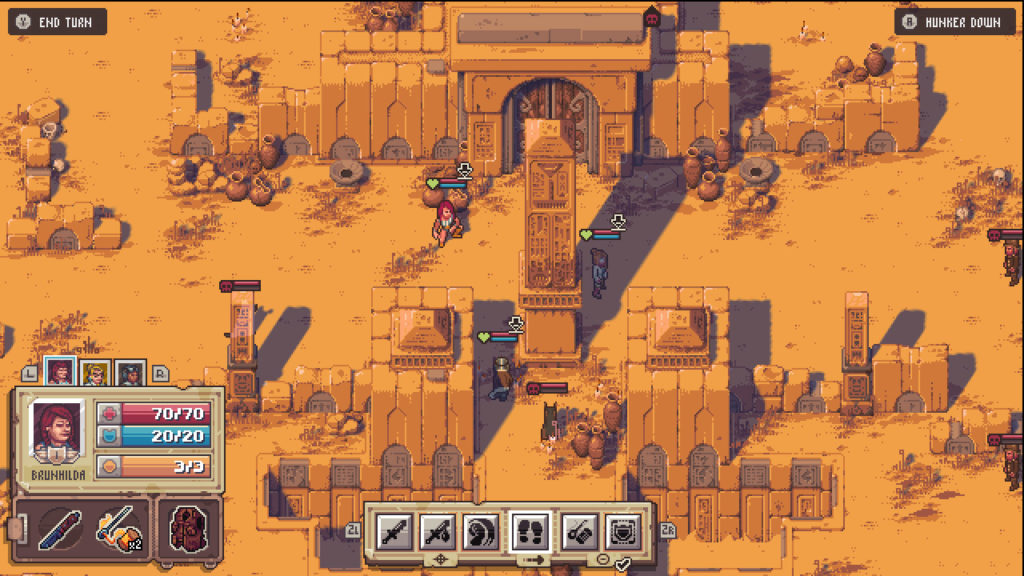 When combat does commence, sneaky snipers with extended range but low armor are balanced off against brutal tanks wielding shotgun buckshot. This overarching class design is further modified by a variety of secondary abilities, from enhanced movement range to baiting dangerous animals, or laying down warning shots. Equipment carried, such as med kits, grenades, and armor allows for some further level of diversity between each operator in this outfit, but you’ll still need to chose wisely. Combat in Pathway generally occurs when your heroes stumble into an unexplored area and find Nazis or tomb raiders. It’s a traditional trope but it does suit the theme, and these encounters tend to unravel in a familiar fashion. Turn based combat entails a pre-placement stage and then a turn based rotation, with each character having limited points to move or act, allowing steely tacticians to take on anything that gets in the way. Like plenty of other turn based titles, attacks and evasion come with a statistical outcome that rarely hits for 100% and a variety of enemies that pose their own dangers. While Pathway’s turn based combat and grid play pen isn’t exactly overwhelming, choices can easily take a daunting turn if you lose sight of resources. Out in the desert, there’s no service station to pick up supplies, so scavenging supplies, gas, and trading when possible provides useful consumables such as ammo and medical supplies. Even in action, characters need to reload, adding extra layers to the traditional spray and pray. This mix of resource management, skill systems, and tactical shoot-outs ensures that Pathway is actually far more daring than the solo dungeon crawlers that make up much of the competition.

Beyond the fisticuffs and potshots of Pathway’s combat, players will navigate a world map that weaves through a number of nodes. As you corner round a sand dune and onto the next stop on a top down map plenty of scenarios arise that don’t involve shooting. Like any good D&D campaign, the number of routes a party can take is largely determined by a mixture of luck and skill. When set upon by makes you’ll get to roll for a clean escape, while stranded adventurers might find help in the form of your engineer. These new narrative paths that unfold, again, make the journey into this adventure feel far more engaging than a simple dragon bash with different enemies and this continues across the story chapters that unfold. Progression in Pathway provides additional tales to play through, extra skill trees, and new teammates to utilize, but this doesn’t always hold up. Given time, Pathway can feel somewhat repetitive, with entire encounters and  enemy squads seeming to jsut replicate themselves and re run an earlier idea as you dash through the desert on another run.

Sure, the idea’s aren’t genre defining and the story itself is a bit of a cheesy romp, but when my biggest complaint is that the port to Nintendo Switch could really have done with narrative and UI text that isn’t minuscule, there’s not a lot wrong. Pathway is a wonderfully upbeat ode to adventure flicks of old. The deliberately arcane pixel art shines though while the tone and setting never make gameplay a second fiddle. If you’re looking for a chilled out Sunday afternoon with the desert wind at your back and some treasure in your sights then grab Pathway now over at the Nintendo eShop.

Stand aside Indie! Developer Robotality and publisher Chucklefish ported their stylish roguelike tale, Pathway, onto the Nintendo Switch at the end of May, and we decided it was high time we had some on the go adventure in our Pathway revie...
0
Average User Rating
0 votes
Have Your Say!
Your Rating: 0
Submit
Write A Review