Space Crew, the star-filled follow up to Runner Duck and Curve Digital’s Bomber Crew just launched last week and we strapped in for another mission out beyond the stars.

Following on from the success of WW2 roguelike, Bomber Crew, publisher Curve Digital and developer Runner Duck got to work repackaging their charming take on flight sims for a new age of exploration. Plunging straight into the far-flung future, Space Crew looked set to take the same basic premise of Runner Duck’s original and shoot off into ta new narrative. Available now across Nintendo Switch, PC, PlayStation 4, and Xbox One Space Crew is an adventure where a crew of spacefaring conscripts are tasked to tear through the solar system carrying out a range of missions. This bunch of caders will find themselves tasked with everything from fending off little purple aliens to rescuing stranded scientists, all while maintaining and upgrading an interstellar rustbucket. 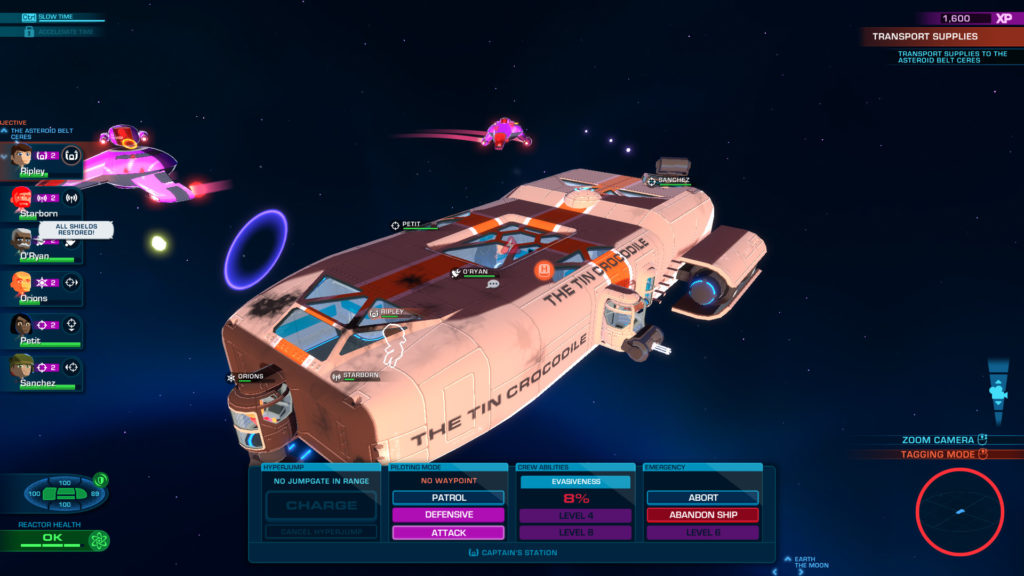 While Space Crew takes a firmly established premise, cut straight out of Bomber Crew, and shines it up with a space-age aesthetic, there isn’t a whole lot that initially looks different to Bomber Crew. While the colour palette is a much more muted series of tones that reflect the backdrop for this tale of B movie castoffs, the game still retains much of the simple charm that made Bomber Crew so appealing. Characters are still a mix of chibbi constructs and Minecraft simplicity with plenty of humour to soften the cold unforgiving backdrop to this tale.

While the core look and feel of Space Crew’s characters don’t fall too far from Bomber Crews bunch of pilots, get behind the controls of your own spacecraft and this becomes an entirely new experience. The setting of this adventure is a definite change and the look of your oversized shuttle is extremely customizable. It might even find you distracted before you pull out of space dock for the first time. Players can take this shiny new spacecraft and spend as much time rearranging the paint job, name, and trim as they like just to get it right. Consider this to be the game’s character creation and somehow it is far too addictive.

Before it’s re-spray, the tin can that ferries your crew across the stars might look like an FTL hand me down but your pilot, engineer, comms officer, security chief and gunners can do far more than just redirect power and put out the latest fire. Crew members each come with their own set of systems and skills that make Space Crew feel like more than a series of on the fly fix it events. While damaged engines do need repairs before they irradiate any organic material and injured crew members should always be patched up in the Medbay, Space Crew is primarily about zooming through the cosmos and coming up against a range of dangerous alien meanies that shoot first and probe later. These combat encounters make up the bulk of the action in Space Crew, between whatever mission you’re sent out to complete. Sure asteroids are dangerous to navigate but they don’t do half as much damage as an alien ace pilot.

Every member of your flight can unleash a range of abilities from boosting the available reactor energy to calling in fighter support, with a whole host of other tactical capabilities tied to each ship station. Just, don’t accidentally evacuate the air in a compartment. that won’t go so well. In the middle of a firefight, and with more options than crew on hand, Space Crew becomes a rhythmic blend of chaos and cooldowns. Crew members rotate between gunnery pods where they can blast enemy ships out the sky, while activating non combat systems, extinguishing fires, or just putting their evasive flying skill to the test. Every captain will find their own ship’s rhythm given time. Thankfully, Space Crew doesn’t expect players to go toe to toe with the toughest of assignments from day one. 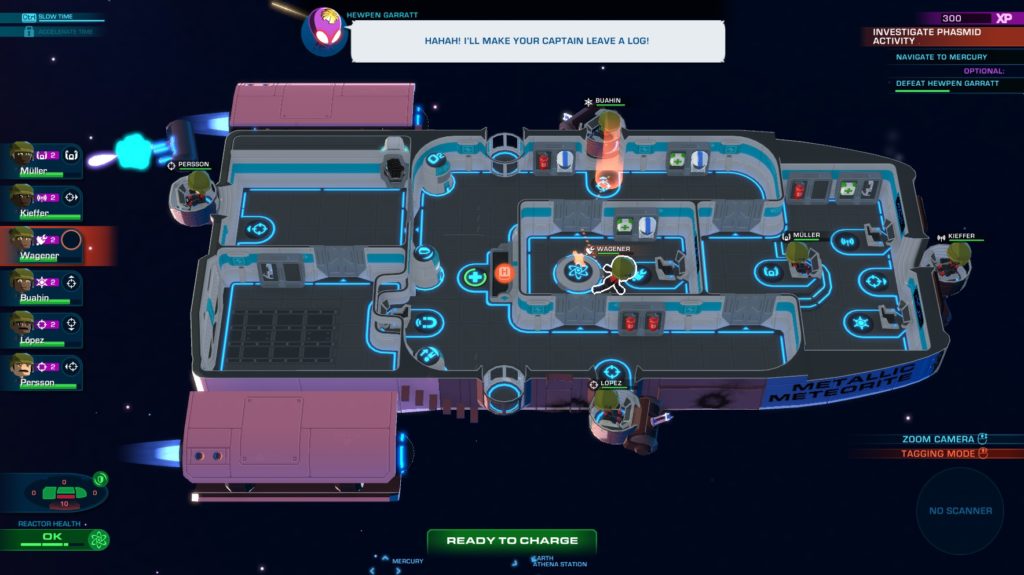 While you get acquainted with your new command, the home base at Luna provides a good range of missions types for anybody foolish enough to get out into space. Picking from a range of easy medium and dangerous missions, you can simply choose to ferry cargo, pick up wayward scientists, or run scouting operations on enemy positions. These early missions provide a well-balanced introduction for anybody feeling like an ensign thrown in at the deep end and provide a forgiving range of encounters before diving headlong into a series of utterly chaotic assignments, with difficulty ratcheting up significantly as the game progresses beyond these first steps.

Space Crew’s gameplay loop does sufficiently compensate players for any adventures in outer space and this mix of Gold and XP is essentially the core of the progression system for any aspiring cosmonauts. Completing missions provides just about enough reward to make your effort worthwhile and provides a mix of ship upgrades, new gear, and extra skills as your crew level up.

While this progression system works to provide a good range of benefits for anybody taking their ship out into the dark, the usefulness of the available upgrades varies significantly. Adding new skills to a crew’s learned abilities feels incredibly impactful and goes a long way to making the difference between a successful mission and a flaming wreckage. Ship upgrades and equipment enhancements for your Space Crew seem to swing between the utterly essential and a total waste of effort. What seems like an attempt to simplify the overall progression system and lean away from EvE inspired spreadsheet mayhem is probably a little more limiting than it needs to be at times, but it doesn’t detract from the fun too much. 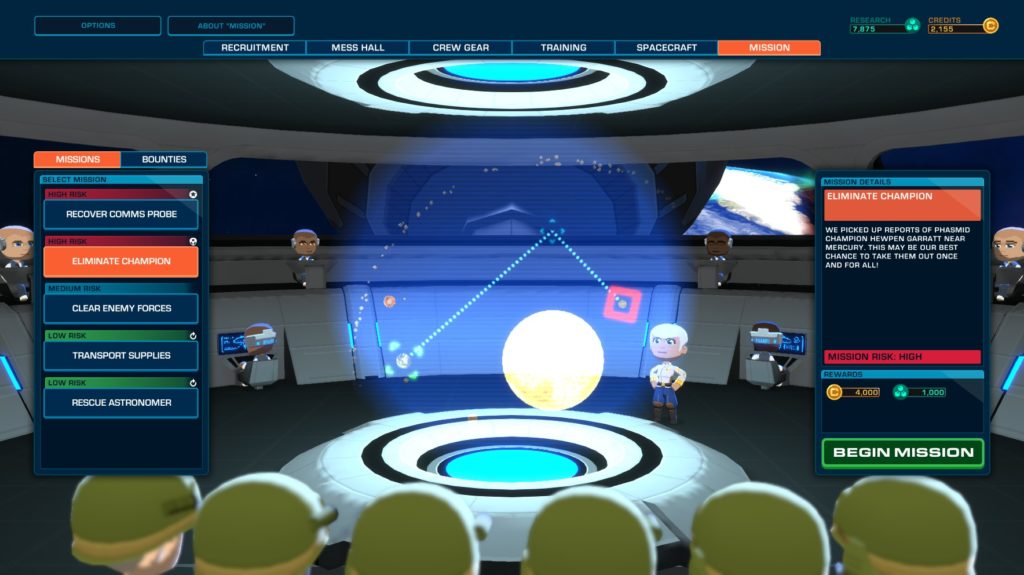 This progression system is, however, all for nought if your ship ends up resembling a flaming scrapyard and its meat sack operators are lost in action. While later missions in Space Crew hold plenty of rewards, you’ll want to take it easy at first to build up some of these upgrades. Even early missions can feel like they are about to tip over into disaster at any moment. This ability to make any captain feel like they are always reacting is both masterful and utterly infuriating. Runner Duck provides a path for all abilities but unless you don’t believe in no win scenarios then you will suffer losses at some point. The utterly punishing nature of losing a crew member or ship is a hard lesson in picking your battles. This permadeath does make player choices feel meaningful and reminds you that there is no sense holding back when you’re out on patrol. Don’t worry though, you will still be able to conscript a new engineer when your pilot decides to fly off in the middle of an engine repair, even if you lose hours of personnel training in the process.

Space Crew is an enjoyable, if not quite perfect progressions from Bomber Crew. The permadeath elements of this seemingly straightforward space sim will infuriate players more used to feeling heroic from the off, but the game is almost always engaging when combat kicks off. Choices can feel a little stifling and the core gameplay loop can feel a little repetitive at times. This is no Mass Effect and you are not on the citadel. Equally, there is a definite learning curve to space combat that is far from intuitive. Tactical decisions are far more important than any piloting skill and understanding the abilities and availability of your crew is essential. Assuming you don’t blow it straight out of Luna then Space Crew is a satisfying challenge that mixes the tactical stylings of many strategy games  with even more chaos and space age meanies than Bomber Crew was ever able to provide. You can pick up Space Crew now over the official Steam Store page. 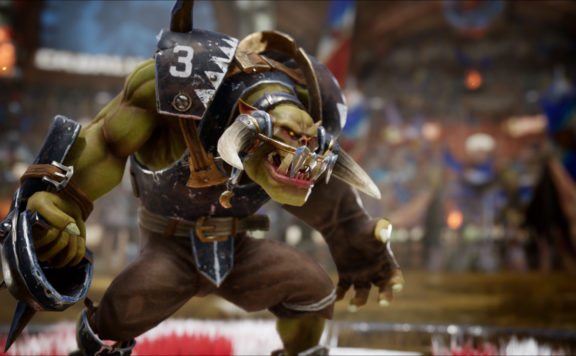 Space Crew, the star-filled follow up to Runner Duck and Curve Digital’s Bomber Crew just launched last week and we strapped in for another mission out beyond the stars. Space Cadets Following on from the success of WW2 roguelike, Bomber ...
9.6
Average User Rating
1 vote
Have Your Say!
Your Rating: 0
Submit
Write A Review