A rumble can be heard all around you, and someone points up to the sky screaming. There is a giant asteroid heading towards your town and you can’t stop it. What you don’t know is that this asteroid is going to cause more than just physical damage to your village, it is going to turn all of your friends and family crazy. They will begin attacking left and right until you discover the cure to the madness. This is our review of Doughlings: Invasion.

From Developer and Publisher Hero Concept, comes the next era of Space Invader type games in Doughlings: Invasion for the Nintendo Switch. You begin the game by watching a brief bit of story and then you are flung into a colorful world where you are trying to save everyone from the alien invasion. You are armed with a blaster type gun that shoots one bullet at a time. This gun is upgradeable so that you can use it more and more as you progress through the game. This game, at its base, is a very good reskin and upgrade of an old school game type. I loved that it felt like Space Invaders without being Space Invaders.

As far as the upgradability of the gun you can upgrade how quickly you can get your special color wave attack. This attack allows you to change the color of the invaders to the next color down from where they are. After you hit them a second time, or a first if they are their base color, the entire group of them will be destroyed. This is a pretty powerful attack in itself. You can also upgrade across five different modes including Morpheus Rifle, Zap, Gunslinger, Destroyer, and of course your armor. As you progress through the levels you earn more and more points to be able to upgrade these to their most powerful forms. These forms are very cool and are limited-time uses so be careful. 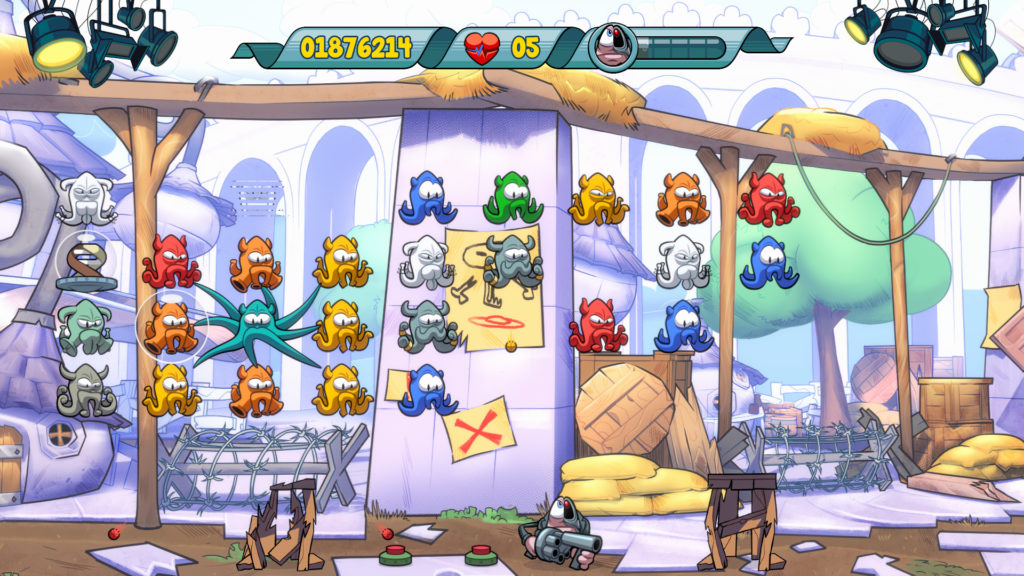 Each different level will allow you the ability to morph yourself into these different modes as well as upgrading your armor. In the early stages of the game, you will get the use of a color gun, which is the first mode in your show off ability. Then you will get Zap abilities from drops in the levels which shoots a laser beam straight through each of the enemies above you. Gunslinger allows you to shoot your bullets at a 45-degree angle and when you use your show off ability time slows slightly to allow you more time to move. The next form is Destroyer, and it gives you a grenade launcher to attack a lot of enemies all at once. The final ability is Armor, and this ability gives you a rapid-fire laser ability with two beams at once. These modes all help you move further into your mission of repelling the space invaders.

There are five boss battles which occur at the end of each level. Each level has ten waves that you have to get through to make it to the boss battle. The bosses all attack with different skills and abilities so you will have to learn quickly on how to proceed into each battle. These fights are the most challenging fights of the entire game, everything else is pretty easy to complete. Complete the game and send those space invaders back into the depths of space.

Tags: Arcade style, Doughlings: Invasion, nintendo switch, Space Invader Shooter
Summary
Overall, Doughlings: Invasion is a fun-filled game that is good for a player of any age. My son had a lot of fun playing it at 8 years old, and I also had fun playing it at 33. It is a game that is worth the $9.99 USD and is available on Steam, Xbox One, and Nintendo Switch. I had an issue putting the game down because it was a little bit addictive to continue playing it until you beat it, so have fun out there.
Good
Bad
9
Amazing

A rumble can be heard all around you, and someone points up to the sky screaming. There is a giant asteroid heading towards your town and you can’t stop it. What you don’t know is that this asteroid is going to cause more than just physical...
8.6
Average User Rating
1 vote
Have Your Say!
Your Rating: 0
Submit
Write A Review