I am a latecomer to Final Fantasy XIV. And yet, it’s possibly been the best way to experience Shadowbringers. 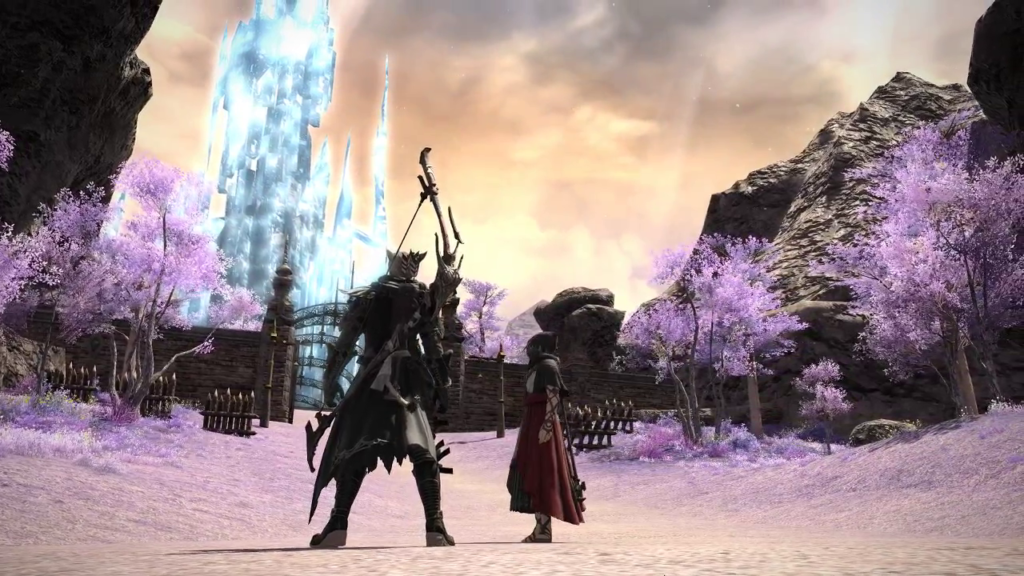 While veteran players had months or years between updates, I enjoyed FFXIV as an unbroken thread. It started in early 2018 with A Realm Reborn and finished with the last of Stormblood roughly a month ago. For such a story-heavy MMO, it’s been like discovering a great fantasy author and chewing through all their books in rapid succession. And it’s so very, very good.

But story alone doesn’t make a good MMO. There’s a whole range of mechanics, systems and content that form an online game at this scale, and they all have to be strong enough to keep us entertained for the long haul. As with any long-running title, Final Fantasy XIV also needs to keep the experience fresh it’s new ideas. I’ll be digging into all of it and more in this, our FFXIV: Shadowbringers review. 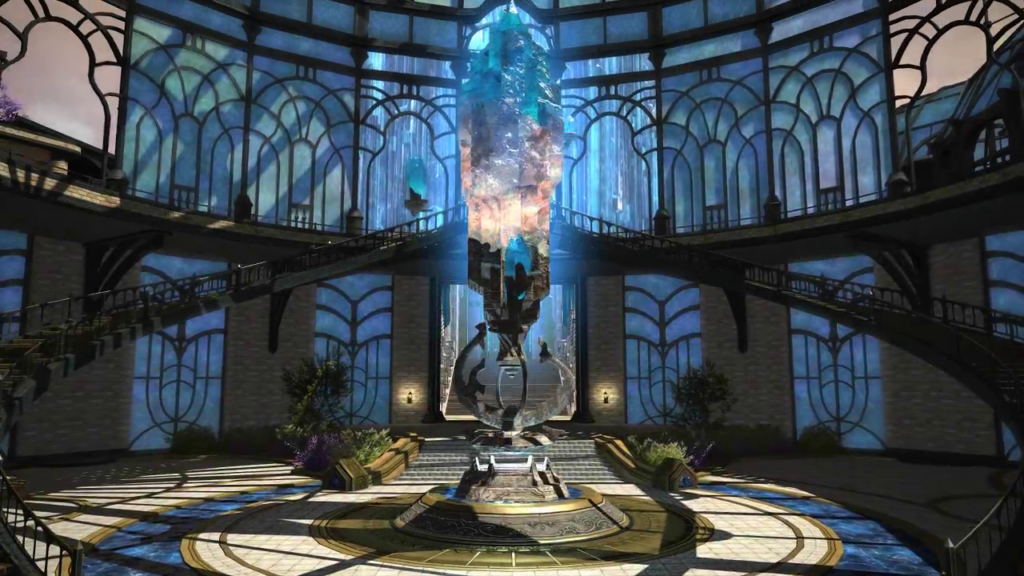 It feels like barely a moment has passed since the closing chapters of Stormblood. I was in the middle of an almost-war, with uneasy truce between the swaggering Garlean Empire and a vulnerable Eorzean Alliance. The Scions, champions of freedom, had been struck down by unknown forces. And a mysterious yet deadly weapon threatened to be unleashed indiscriminately at any moment.

The home that we knew and played in throughout Final Fantasy XIV was in desperate peril. And yet, in the opening moments of Shadowbringers, I’m pulled away to a mirror-world that splintered from the original. Instead of being the Warrior of Light, I’m expected to trade in that title and become the Warrior of Darkness. Spooky.

But this story has been brewing for a long time. One of the earliest crumbs of lore was that Eorzea was just one of 14 different shards – a Source world and 13 fragments. Our journey through FFXIV had teased a little about the differences between the 14 worlds and the rift between, but this is the first time we’d see it first-hand.

After a brief moment to settle on the First shard, Shadowbringers catapulted me headfirst into a multi-layered story that followed from previous expansions and continued throughout the levelling experience. 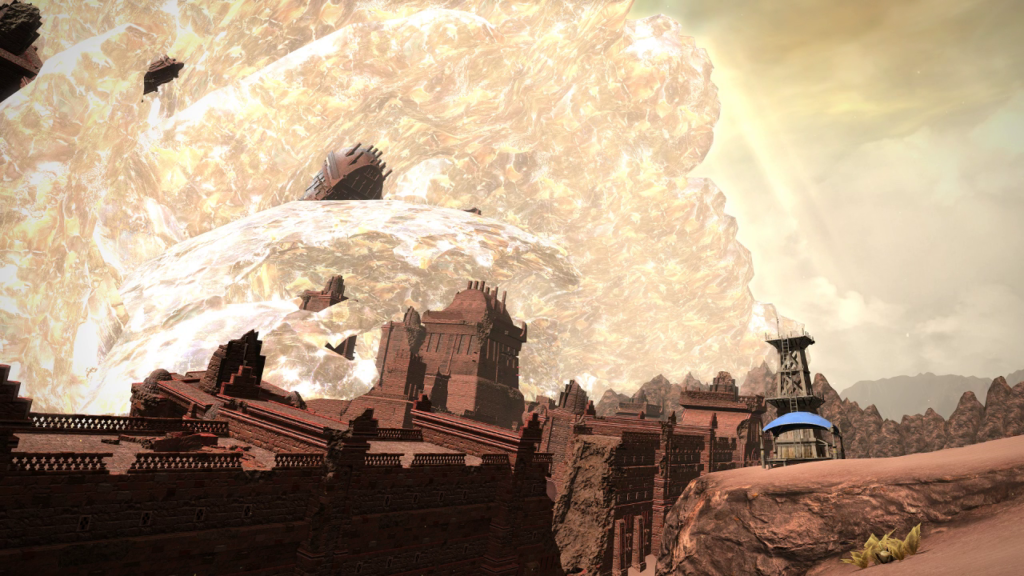 There’s a hefty dose of political intrigue, of a nation in crisis. There’s a roving band of heroes trying to save both worlds from certain armageddon. And then there’s the bigger picture – the long-running saga between gods, their agents, and mortal man.

It’s this narrative complexity that’s served Final Fantasy XIV very well in Heavensward, and it shines once again in Shadowbringers. But the latest expansion is also consistent with previous games and updates. Crossing the rift from the Source to the First doesn’t feel like jumping the shark, in stark contrast to other MMOs that have crowbarred in alternate dimensions.

But this complexity also makes Shadowbringers absolutely riveting to play. It’s been a heck of a long time since an MMO persuaded me to stay up late to finish just one more quest, to push just a little bit further forward. The copious cutscenes and liberal use of voice acting help to pull in the immersion, but it’s the overall construction of the Main Scenario questline that’s kept pulling me through this expansion.

Even so, this is a story-heavy and lore-heavy MMO RPG that lives up to its Japanese heritage. If you’re not a fan of that style of game and prefer to get right into the action, FFXIV might not be the right MMO for you. 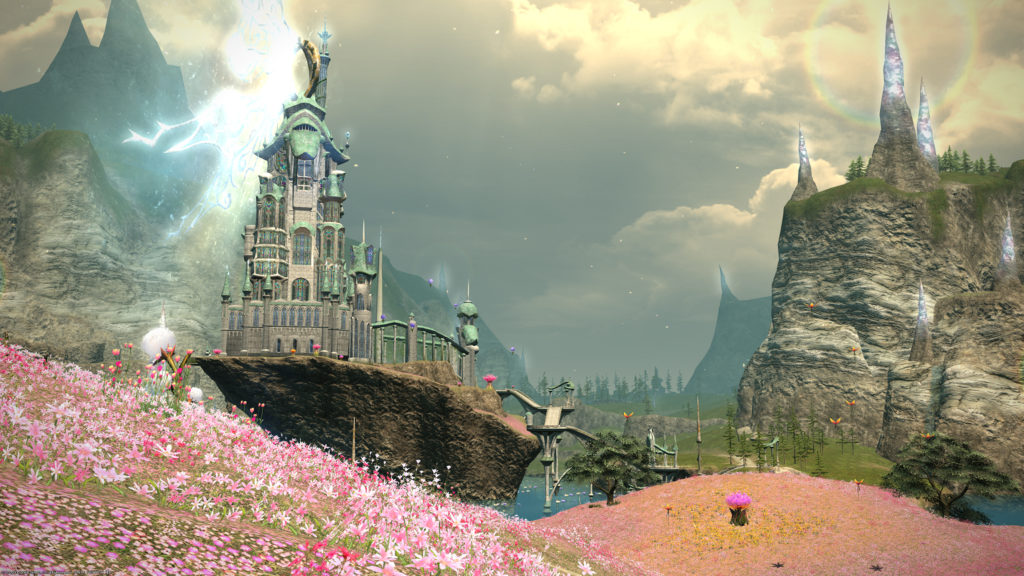 The First isn’t a complete reimagining of the world of Eorzea, but it isn’t a twisted reflection of that Source either. Instead, it’s as if the history of all these shards diverged some 100,000 years ago. As a result, there are both similarities and differences, just like visiting a foreign country.

I arrived in the Crystarium, an expansive citadel of steel and glass that encircled a sky-piercing crystal tower. This city would become both home and base of operations as I ventured through Shadowbringers, all under the watchful eye of a mysterious leader known as the Crystal Exarch.

It wouldn’t be long, however, before I’d venture out into the bleak steppes of Amh Araeng – a desert wasteland of bitter red hues. It’d be in stark contrast to Kholusia – a sun-bleached flood of pale grassland and coastal villages. Both regions are carved into two halves, with one part only accessible later in the story. 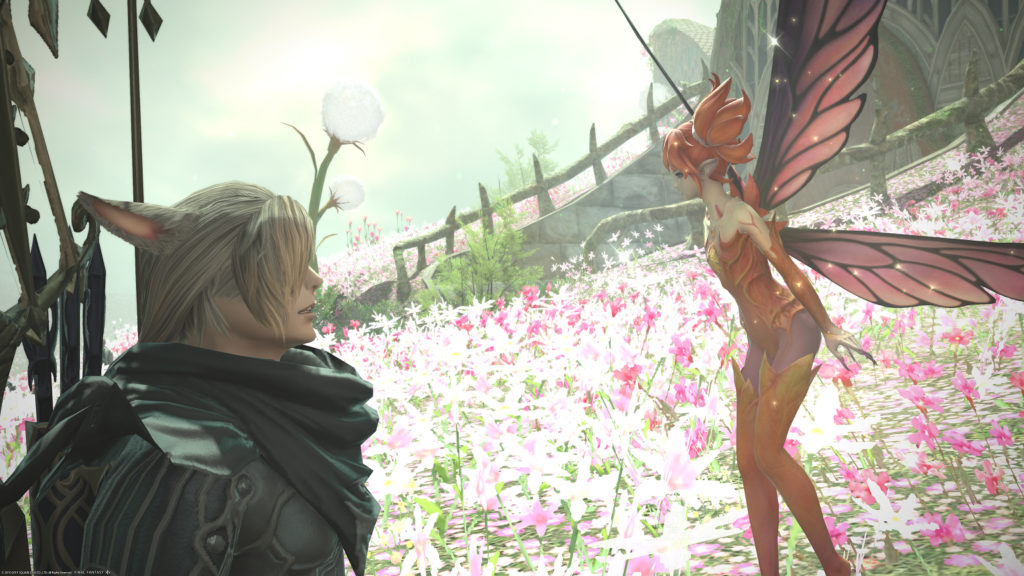 Then there’s the pixie wonderland of Il Mheg, complete with resplendent spire-laden castle and bizarre circular rainbows. Or the lush forests of the Ra’tika Greatwood, complete with vine-ridden floors and lofty canopy village.

Where ever I went, I felt compelled to explore. I might find a forgotten township flooded at the bottom of a lake, or a monument to a lost nation on an isolated crag. It made me feel like so much had been built up only to be snuffed out in these end times. The sense of hopelessness and desperation in Shadowbringers loomed large.

I can’t finish this section, however, without mentioning flying. Shadowbringers continues with the method of zone-based unlocks for flying mounts, with each unlock requiring a combination of discovering Aether Currents scattered around the map and completing specific quests while in the zone. It meant that I’d unlocked flying in some areas within a few days of Shadowbringers launching, and I’m still amazed that other MMOs have you waiting a year and require a huge grind… 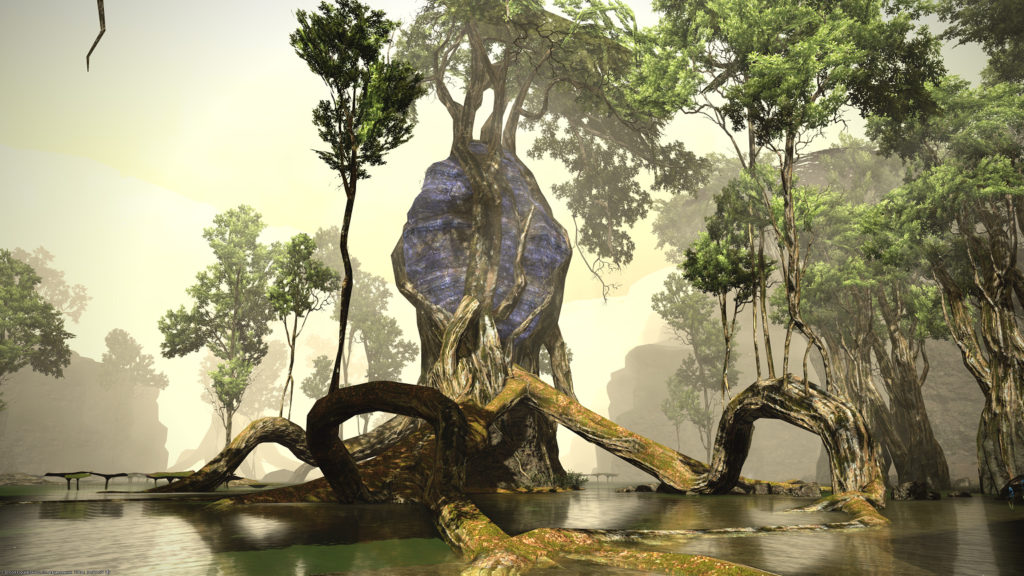 Flipping over to the mechanics, and there’s been some significant work to the FFXIV experience. Almost every job got updated in Shadowbringers, with many losing abilities that seemed redundant or non-central. On Bard it felt streamlined as if the fat had been trimmed from my action set, but on White Mage it pushed me into focusing on healing at the cost of damage. The experience has caused a mixed bag of reactions but, on the whole, my casual self is OK with the changes.

A change that I’m absolutely cheering with, however, is the new Trust system. Instead of queueing up for 4-player dungeons and being forced to wait for a healer and tank, I can recruit some of my best bud NPCs instead! It means I can get started immediately, even if the AI-controlled party takes a little longer to clear the place.

Besides the quick queues, the Trust system has two major benefits: I can learn the place and screw up without making the party rage against me, and the NPCs actually chat with each other as we work through the dungeon. It’s these little tidbits of story that make it all the more interesting. 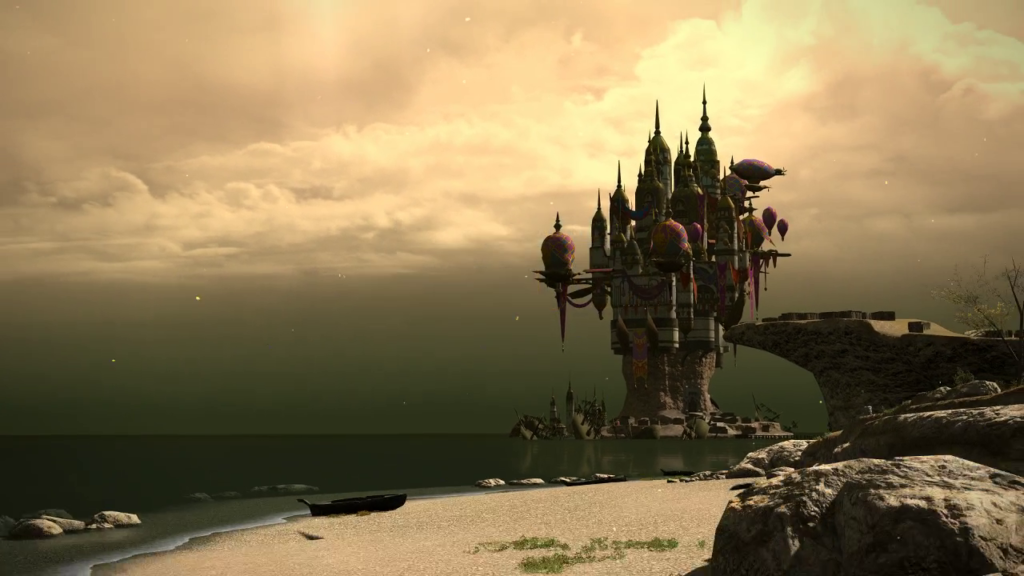 I also appreciate how levelling up is much more flexible in Shadowbringers zones. Many of the side quests now sync to my job level, which means that I can save the content for later playthroughs instead of just tapping up the Duty Finder for group content.

Dynamic FATE events now include gemstone tokens in their rewards to make them more compelling to re-run, plus each zone has a trader with tier-based unlocks. It means that there’s a reason to keep busy, even when you’re not running dungeons.

But it’s the new Gunbreaker and Dancer jobs that really make the expansion for me. These Tank and physical DPS roles (respectively) are huge fun to play, but also very easy to pick up. Each use a combo-based system that helps guide newcomers through the rotation, but they both have a very unique feel.

The Gunbreaker has a fairly simple ability rotation, but with a high DPS loop that can be accessed on a cooldown. There’s a much bigger focus on situational abilities to mitigate damage or provoke monsters into attacking you rather than squishier party members.

By contrast, the Dancer has a strong rhythm game feel that you need to master in order to maximise DPS. It also encourages you to pair up with a dance partner in order to share the buffs and dish out even more damage.

Each of these new jobs unlocks at level 60, and I’ll definitely be pushing them up to the new level cap of 80 once I’m ready to take a break from my main. With Job synced quests, new FATEs and the Trust system for dungeons, I’ll also have more choice than before about how I get each of them to the new cap. 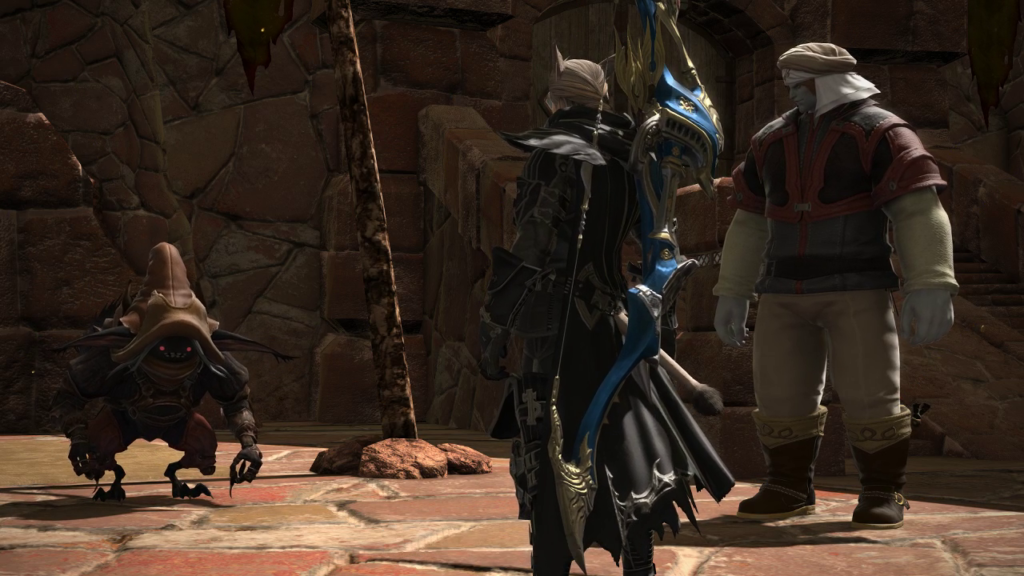 Compared to previous FFXIV expansions, Shadowbringers is a bleaker update that places an unsteady hero at the centre of a desperate world. The story, partly featuring voiced cutscenes, does an immense job of keeping me interested while continually propelling me forward. Yes, it means that the experience will be similar for everyone, but it also makes it that much more compelling.

Zones are expansive and beautiful, and the accompanying music is perfectly blended to match. I particularly love the transition to heavy rock every time I enter combat, as it makes me grin every time like I’m walking down a WWE runway and about to unleash whoop-ass. But every region has an anthem that just makes me want to stay awhile and listen.

Shadowbringers is also a rewarding and satisfying payoff for those that have played through the entire story rather than just skipping ahead. There are so many callbacks to earlier points in the story or creatures I encountered on the way.

And yet, it’s not perfect. Final Fantasy XIV is showing its age, both in zone density and graphical complexity. Time has moved on since A Realm Reborn launched in 2013, and yet the venerable PlayStation 4 is fully supported. It doesn’t detract from the experience, but it’s starting to become noticeable.

For me, though, Final Fantasy XIV: Shadowbringers is one of the best MMO expansions I’ve ever played. The story is incredibly good, the new jobs are ridiculously good fun, and the mechanical updates work well. The word of the First is a beautiful treat, and music is top-notch. If this sounds like your jam, you should absolutely play it.

Tags: FFXIV, final fantasy xiv, MMORPG, pc, ps4, shadowbringers, square enix
Summary
Final Fantasy XIV: Shadowbringers is one of the best MMO expansions I’ve ever played. The story is incredibly good, the new jobs are ridiculously good fun, and the mechanical updates work well. The word of the First is a beautiful treat, and music is top-notch. If this sounds like your jam, you should absolutely play it.
Good
Bad
9
Amazing

I am a latecomer to Final Fantasy XIV. And yet, it’s possibly been the best way to experience Shadowbringers. While veteran players had months or years between updates, I enjoyed FFXIV as an unbroken thread. It started in early 2018 ...
9.7
Average User Rating
3 votes
Have Your Say!
Your Rating: 0
Submit
Write A Review
Genre:MMORPG
Developed By:Square Enix
Publisher:Square Enix
Modes:Online Multiplayer
Series:Final Fantasy
Engine:Custom