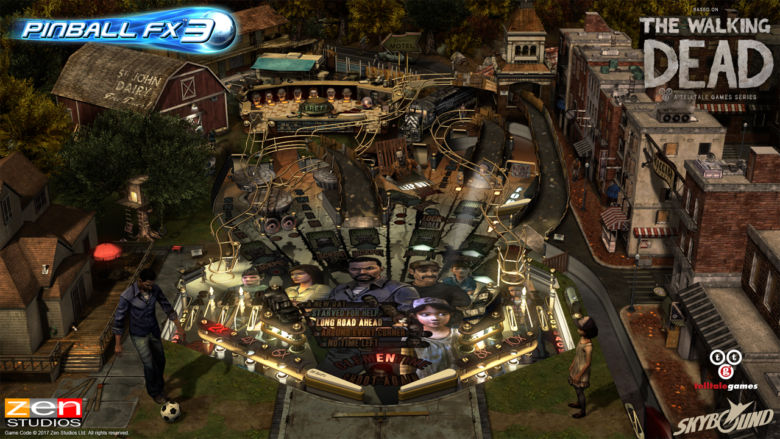 I grew up in a small town next to neighbors who had kids that were roughly the same age as my older brother and me. Our adventures usually included exploring the overgrown land between our houses, building massive LEGO sets, and seeing what wonders we could find in the automobile graveyard that was their grandparents’ house… which also happened to be two doors down. One such adventure turned a normal day majestic when we managed to sneak into their grandparents’ basement to find a fully operational pinball machine! I don’t remember the theming, but I’ll never forget the explosion of light and chimes as steely spheres bounced from bumpers to bonus points. While that was neither the first nor last I have seen a pinball table, the memory imprinted on me. So, without any further breaking and entering, this is our review for Pinball FX3 for the Nintendo Switch.

As its name suggests, Pinball FX3 is the third installment of the Pinball FX series. Don’t let the numbers fool you, developer Zen Studios has a storied history and love for pinball games. With over ten years and an impressive catalogue of games to speak of, this indie studio is on a mission to bring the table(s) into the living room.

I say “table(s)” because one of the key features of Pinball FX3 is that it has thirty possible tables at launch. These tables range from generic themes to those based around TV shows in the pop culture purview (the Walking Dead, Bob’s Burger) to cult classics (Jaws, Back to the Future, Alien). Pinball FX3 takes a pay-to-play approach to the extra tables by providing the core game along with a single table for free with extra tables and packs available for purchase. The nice part about this is that it allows you to pick and choose the content you want to play while skipping the tables you may not be as interested in. That being said, each table costs approximately $2.99 per table. If you were to buy the whole collection, it would take you into the $50 range. 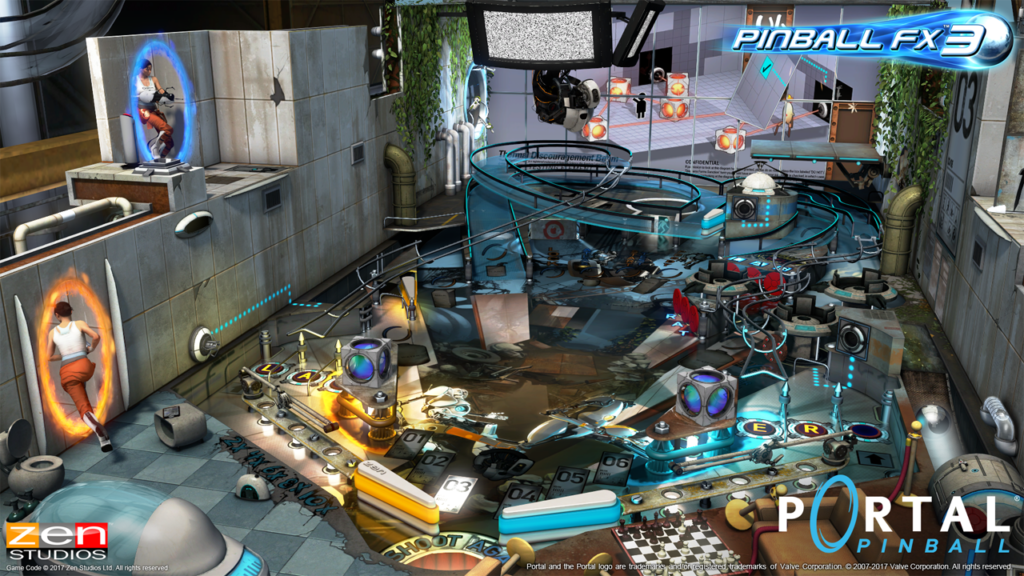 Now that we have the pricing out in the air, let’s talk about actual gameplay.

Pinball FX3 plays, well, like a classic arcade pinball table with all of the flashing lights and sounds. They have even recreated the monochromatic displays with table-themed animations. And, yes, you can tilt the table! (If you are unfamiliar with “tilting”, it was an old exploit where you could literally bump the table to move the ball… you do run the risk of breaking the game though…).

Where gameplay gets a bit trickier is in keeping track of where the ball is on the table. While there is a button assigned for quick changes of view, sometimes that isn’t quiet enough. There is an interesting option with the Switch which allows you to play in handheld mode with the console in a portrait mode orientation. It’s a little unwieldy, but I commend the idea! I found that if I removed the Joy-Con off of the top of the display that it wasn’t so top heavy.

Pinball FX3 has a progression system that essentially rewards you for playing each table. As you play, you earn table upgrades which will help increase your score for that table, increase your ball save timer, and extend your combo point multipliers – to name a few. You can also earn Wizard Powers which are active abilities such as score boosters, slow motion, and rewind. These are earned through each table’s Challenge mode. 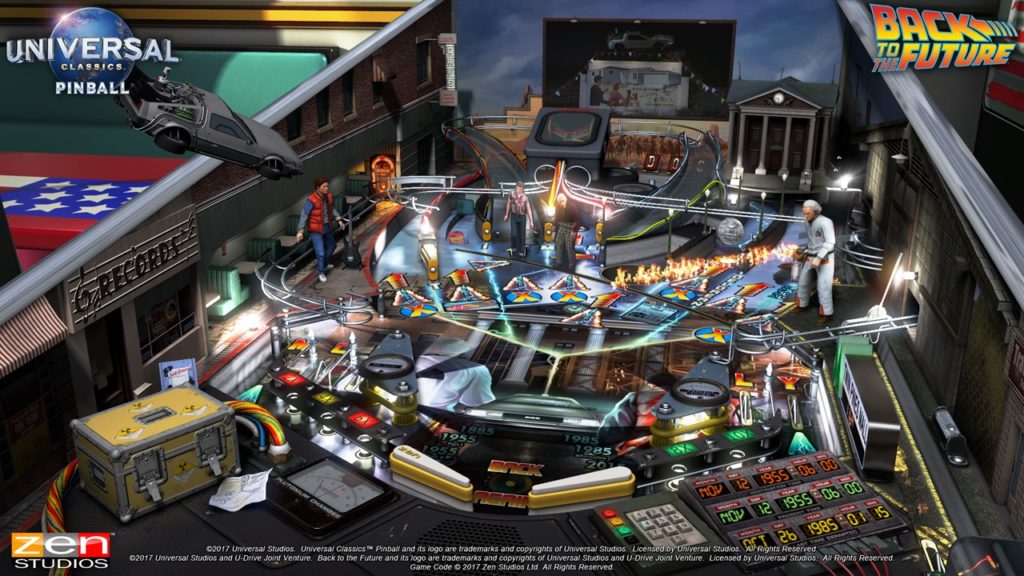 As previously mentioned, Challenge mode is a single player mode which gives you one ball and rewards you with stars for every score checkpoint you reach. These stars are used to unlock Wizard Powers. Single Player mode gives you access to all of the Wizard Powers and table upgrades that you have unlocked while Classic Single Player removes them from the game entirely. Outside of the Single Player and Challenge modes, Pinball FX3 features online multiplayer and leaderboards through their Zen Server. There is also local multiplayer through the Hotseat mode. This mode allows up to four players to trade turns after each ball.

So, does Pinball FX3 scratch my pinball itch?

With all that it does right to capture the essence of classic arcade pinball tables, Pinball FX3 does have some missteps. From a graphical standpoint, most of the tables feel like they would have been at home on a previous generation console. While the animations are fairly smooth, it’s hard to ignore the pixelated edges in an art-style that is not meant to be pixelated. While this wasn’t as noticeable in handheld mode, it was exaggerated on the big screen. The other disappointment is that there was no haptic feedback throughout gameplay. I wanted to feel the bumpers slamming each ball or to feel the ball rolling down each paddle. One more thing: I’m not sure we needed an overly enthusiastic girl clad in a vinyl bodysuit as a pinball mascot… she just seems out of place. While none of these issues are necessarily game breakers, they just diminish what was otherwise an excellent pinball experience. 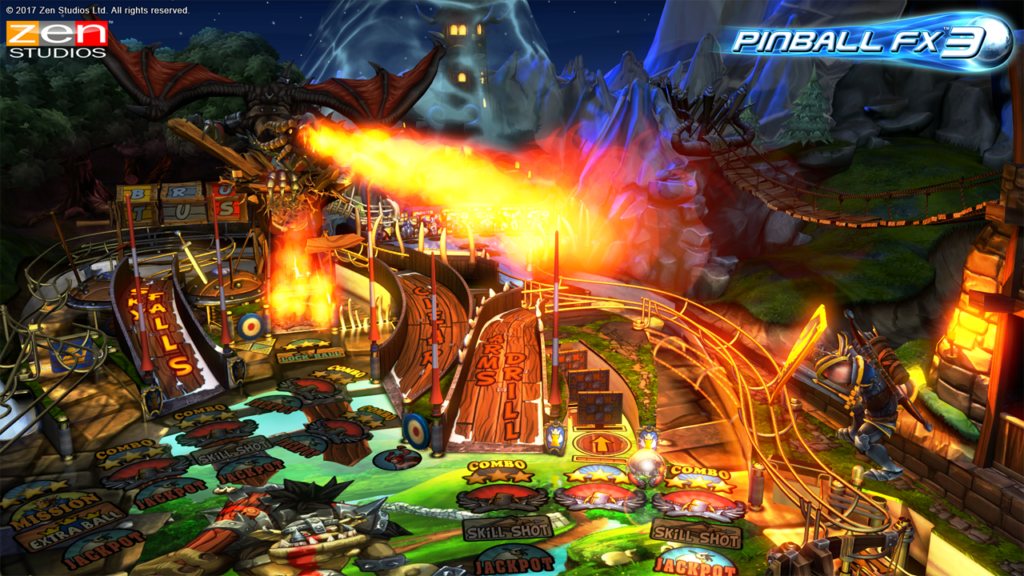 Written by
Damien Gula
Born in the heyday of mullets and the El Camino to a tech-foward family, Damien (a.k.a. Dame, PastorDame) quickly embraced the reality that “normal” is just a setting on a dryer. Damien is a pastor by trade and loves talking with anyone who is interested about life, God, and video games (in no particular order) - so, much so, that he and fellow MMORPG/GameSpace writer Matt Keith (Nexfury) create a podcast dedicated to that conversation. At the end of the day, Damien is a guy who loves his wife, his Mini Schnoodle, and crafting gourmet bowls of Mac N’ Cheese.
Previous ArticleWild Guns Reloaded is coming to Switch this yearNext ArticleAmnesia Collection Is Free for the Taking on the Humble Store